My journey in the Land of Cockaigne with plum cake

Plums are such a great fruit coming out in late summer. Juicy and sweet I love them eating just the way they are. But also in any other form like cakes, custard or even soups.

Plums are a kind of drupe fruit and they are coming from the prunus family. Inside they have just one hard stone or pit with another smooth and smaller stone inside. The inner part of plums are often dark red but also green or yellow. Outside they are mainly reddish but as well yellow or even green.

The prunus domestica maybe is the one more common but I like the damson plum. That is the one inside greenish and less soft and more sour, astringent. The yellow ones are called Mirabelle plums, then there are the Victoria plums and the Greengage plums I never used in cooking. And rarely found them. 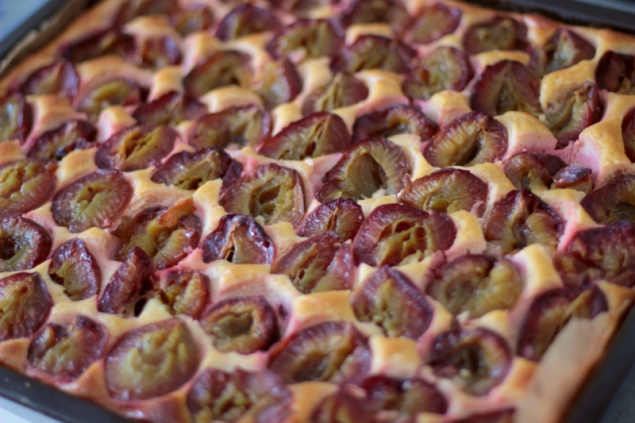 I think, many use also dried plums ore prunes as well in their diet. They are great for digestion it’s said. It never worked on me.

Plums have a lot of health benefits like all fresh fruits have. They are low in calories but have a lot of minerals and vitamins. High in dietary fiber and antioxidants they are even good for your eyes, did you know that? And they control blood pressure and heart rate. Very interesting: they help in reducing Alzheimer’s disease. Another good reason to eat them as much as possible during the season. Organic of course!

So when I was in Germany in August I found organic, fresh damsons and took three kilos of them. One for me – I finished in less than 24 hours, fresh, eating them in any moment and nothing else.

The other two kilos I took for a cake, plum cake. For a whole baking tray of juicy plum cake. I LOVED it. With some sugar and cinnamon sprinkled on every piece. It was heaven!And all the people of the party I cooked for they loved it as well. And couldn’t believe that it is without sugar, grain and dairy. They didn’t taste any difference to the ‘normal’ one. That is also a kind of paleo success story – out of the kitchen.

Try this for your next party or guests! They will clean the whole tray as washed up!

Come and feel like in the Land of Cockaigne with this recipe:

Plum Cake
A typical German cake in the end of summer
Ingredients
For the crust
For the topping
Servings:
Instructions
Recipe Notes

Cut the cake into squares and put some sugar (Sukrin

) mixed with cinnamon on the top. The plum cake is even better the day after because it gets more juicy over night. Very quick to do and if you triple the recipe you can do even a high baking tray. In that case take at least 2 kg of plums like I did.