From the Cajun Cuisine – Jambalaya My Way 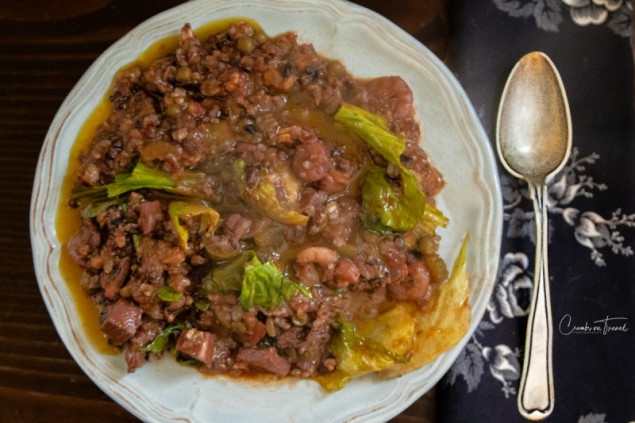 Jambalaya is a dish of the Cajun cuisine of Louisiana of the USA. Influences of the Spanish, the French and even the West African cuisine make it special. A mix of vegetables, meat and fish together with rice it reminds a little the also world famous paella from Spain and the Italian risotto.

I love risottos and all kinds of stews, especially and mainly during the cold season. Soups are a lighter form of stew, but are similar as well. So when I had first this dish I was all about it! 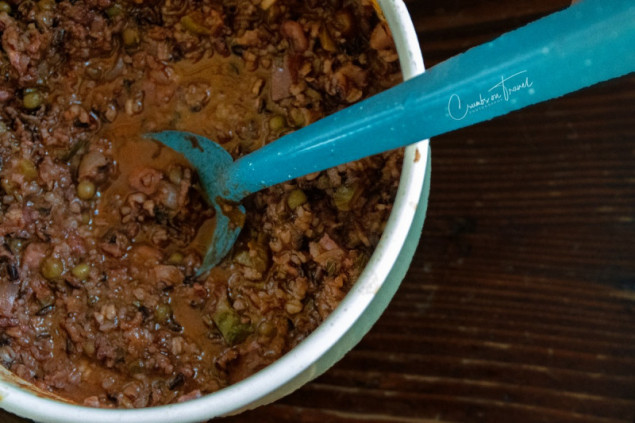 Jambalaya – I like that word, it sounds so ’round’ and ‘cozy’ – was ‘born’ in the French quarters of New Orleans. Spanish people tried to make their own paella, but without saffron which was (and is still) very expensive. They changed it with tomatoes. By the time the many spices from the Caribbean found the way into the dish, the Cajun spices are a mixture of them and in the original recipe.

There are many different ways to make it. There are e. g. the Cajun Jambalaya and the Creole Jambalaya. The last one has tomatoes. But they all have onions celery and bell pepper as vegetables, chicken and sausage, broth and fish or seafood. Like all kinds of stews it is a dish born in the kitchens of poor people.

Some curiosity? The name comes from the French, better the Provençal and means exactly what it is: a mishmash.

There is an annual festival in Gonzales/Louisiana in the end of May, with a good ‘mishmash’ of events.

My version is different to the original one in many ways. I started to sautèe the three vegetables onion, bell pepper and celery, but added also some garlic gloves. Then I added a simple sausage, chicken breast, the rice (I used black rice as I didn’t have other) and the chicken stock. I had some leftovers of peas and put them in as well. As I had no Cajun spice mixture I used harissa, a Moroccan spice mixture. Then I let it cook until the rice was nearly done and added the shrimp more or less 10 minutes before all was cooked. I did this in the late afternoon and let the Jambalaya sit overnight in the pot on the counter. No fridge involved, it would stop the progress of getting taste and absorb the rest of the liquid.

The day after I had a very delicious meal! I am always delighted with a stew on my plate, in wintertime, when it is cold outside it is so warming and satisfying. I first had a lettuce wrap and then decided to put the lettuce in the dish to get warm. I like warm salads in winter.

Let’s prepare the Jambalaya together! 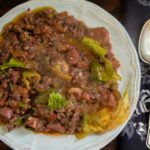 I put also leftover vegetables in my Jambalaya stew.

I used black rice, that's why the color of the dish came out so dark. White would look better, the taste is great with all kind of rice.

No shrimp? Use any other fish or even seafood.

If you let sit the Jambalaya pot overnight outside the fridge, it will get even tastier than fresh made. Like all stews.

Serve the Jambalaya alone or with some fresh homemade and toasted bread.

For further information:
Here you find something about the Jambalaya Festival in Gonzales/Louisiana