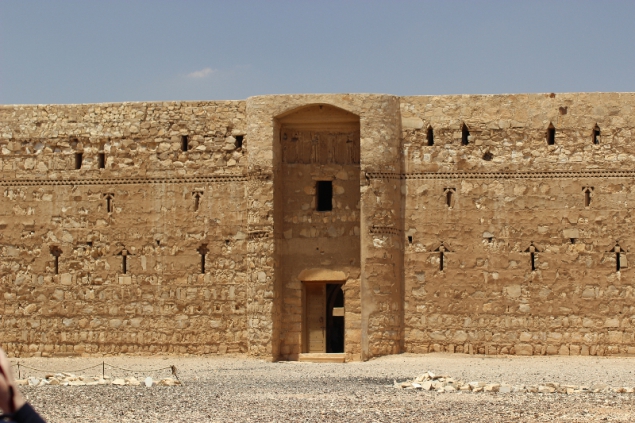 They are called desert castles and there have been once a lot of them. All along the trade route between Medina (Saudi Arabia) and Kufa (near Baghdad, Iraq). The Umayyad dynasty built them in the 7th and 8th century in today Jordan. 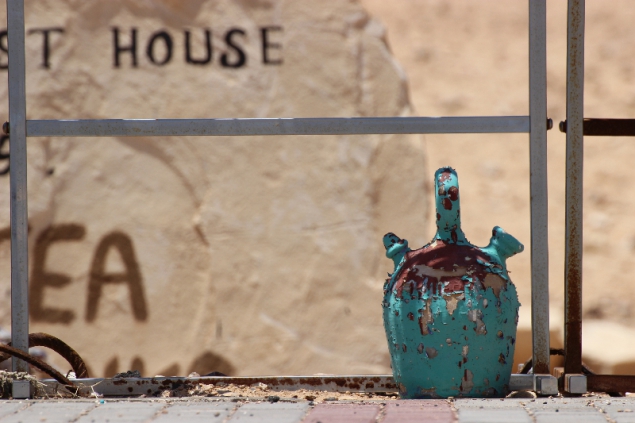 The Umayyad caliphate was the second Islamic caliphate established after the death of Muhammad. They were mainly based in today Syria with their capital Damascus. To their Muslim conquests they incorporated Al-Andalus (Spain), the Maghreb (Northwest Africa) and Caucasus, Sindh (Pakistan) and Transoxiana (Today Uzbekistan, Tajikistan, Kyrgyzstan and Kazakhstan). With this it has been the world largest empire. 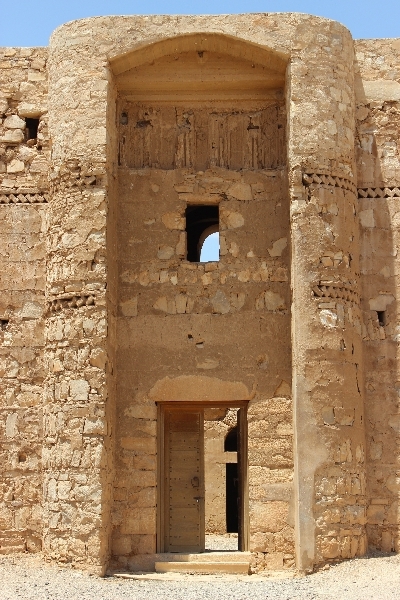 One of many desert castles and retreats they built is Qasr Kharana east to Amman, the capital of Jordan. Just an hour away we had the possibility to find a total different world.

The castle was built in the early 8th century and maybe there has been already a Byzantine or Greek house existed here before it. The castle is one of the oldest examples of the Islamic architecture in this part of the world. 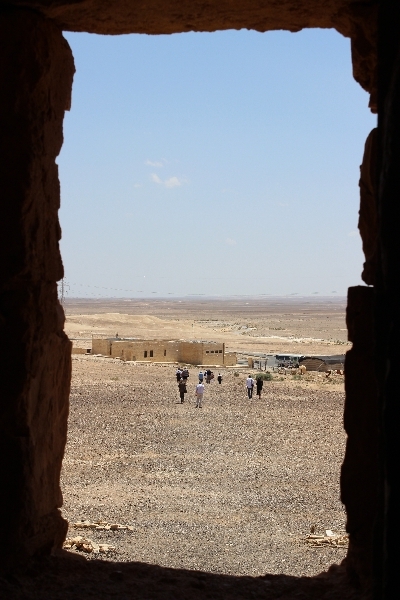 The world castle is a little confusing as it was not used for military purpose. Although from outside more a castle like building the inner parts don’t show anything for military use. It seems more to have been a Caravanserai, a resting place for merchants and travelers. Puzzling is also that it has no own water source at is far away from a trade route.

Qasr Kharana was the most impressive of the three we had visited – Qasr Amra and Qasr Azraq. It made me think of huge castles in Italy and Greece from the times of Frederick II I have seen for example in Sicily and Crete. 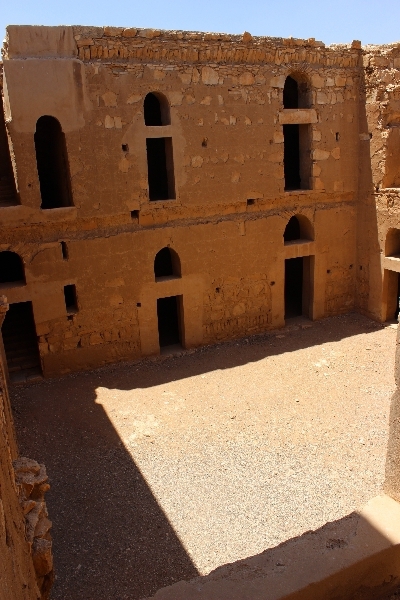 The small arrow slits seem to be more for light and for watch-out purpose than real defense. The castle is nearly completely preserved and is amazing as well because there is no other structure at all in the surroundings but a visitor center.

The building has 35 meters each side (our guide told us) and small towers at every corner. The south side has a rounded entrance. The building is made of limestone blocks and the entrance is highly decorated with reliefs and set a little bit backwards in the wall. 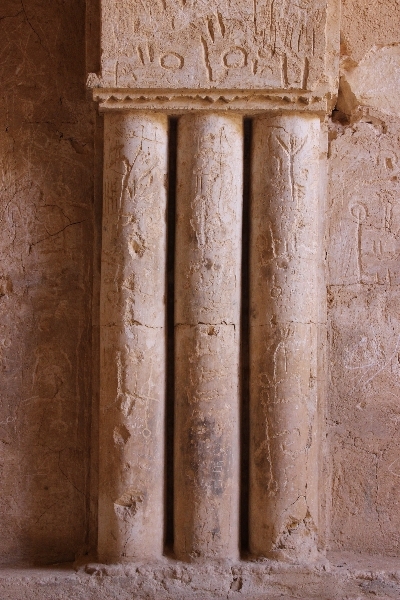 Inside there are a lot of rooms on two levels and set around an inner courtyard. Here there is a rainwater pool. Small slits in every room give light and air. Rooms were once decorated as seen today. An ancient graffito dates the building to 710 AD.

The architectural style is Sassanid but influenced also by Byzantine and Roman style. Thanks to wooden lintels the building resists better to earthquakes. There is a room for prayer and light into rooms came also from bigger windows to the courtyard. 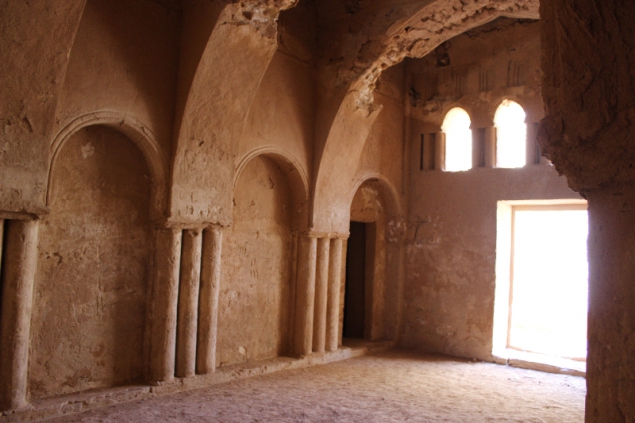 Because of no water source (as there is no oasis and only rainwater possible) historian think it was used maybe only temporary. The castle fell in abandon and was restored only in the late 70th. Today it is one of the most visited places in Jordan. But honestly I haven’t seen so many people around and I like walking nearly alone in within the walls. 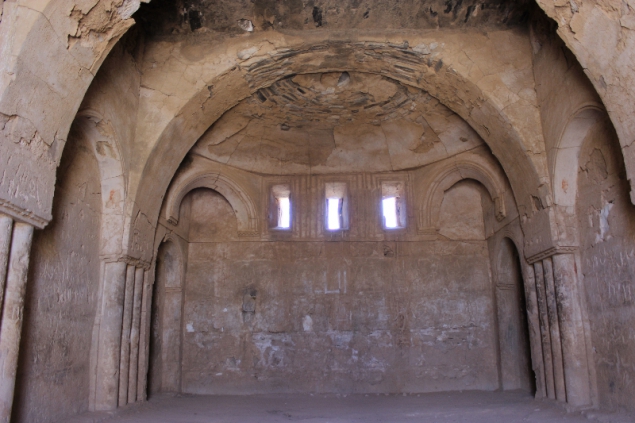 I liked a lot to stay here and definitely we spent most time in this last Qasr we visited. The structure let a lot freedom to ones own imagination what the purpose of the building was. A meeting place for Bedouins and the caliphs? Just a place where to stay overnight on the way to somewhere? Or a retreat for a noble family? In any case: the building is well-preserved and gives a good glimpse on the early Islamic architecture. 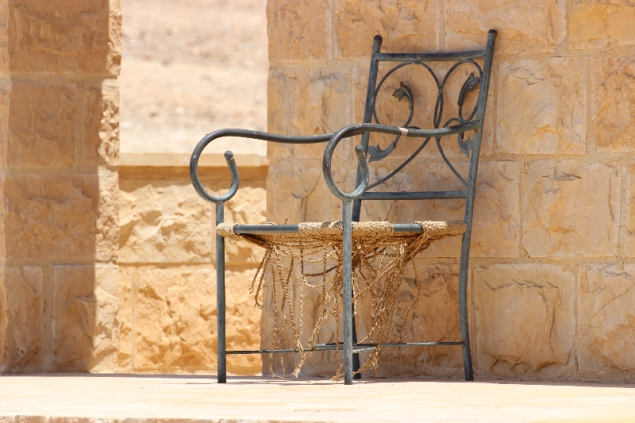 The castle is open to everyone, has no guides, just an interpretive plaque inside the main entrance with explanations. The whole structure is free to visit. Entrance fee: 2 JD.

Souq and Markets in Amman
Amman - Capital of Jordan
Incredible Sand Art in Jars
This entry was posted in Jordan, Middle East, ON TRAVEL and tagged Jordan. Bookmark the permalink.