St. John, The Witches and some Weeds 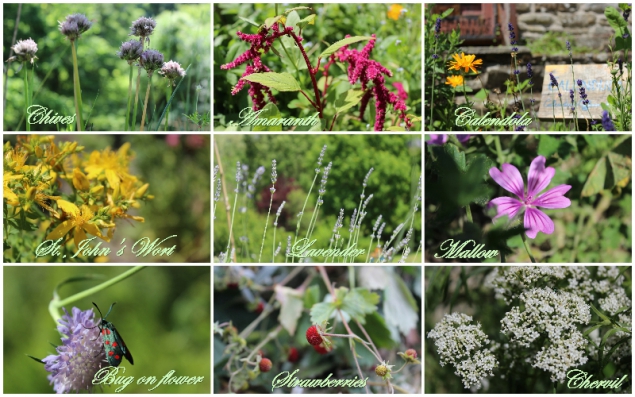 Since the medieval times not only in Italy the feast of Saint John the Baptist is celebrated on 24th June. It is the birthday of the saint who is said to be born six months earlier than Jesus. It’s also the Midsummer or solstice which is celebrated since ancient times and one of the celebrations converted into a Christian feast. Somewhere the event takes even three days. 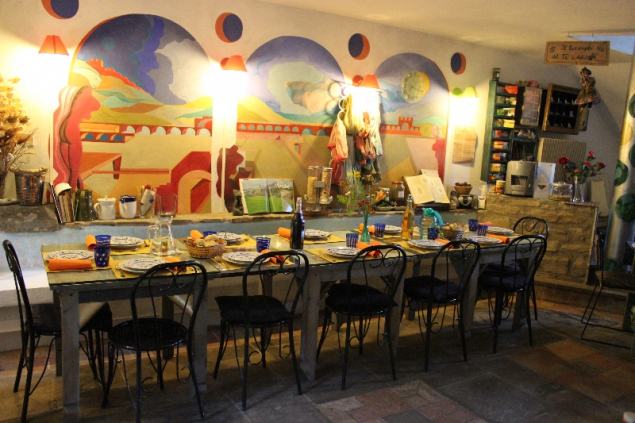 Saint John is the protector of the herbs. St. John’s Wort (old English=herb) is the famous herb of the saint that has been used for medical professions for many centuries in Europe. It is keeping witches and demons away and so used very often for people with depression (which was seen once as a demon in a person). That’s why a bonfire is finalizing the feast in which everyone throw St. John’s Wort and 6 other herbs to catch away bad influences. Flowers grounded in a mortar and mixed with olive oil was turned into a balm for wounds, especially in wars and crusades. The herb is native to Europe but also spread in other continents. In the United States it’s not treated as a healing herb but as weed and often called goat weed. Thinking about it: the goat and the devil… 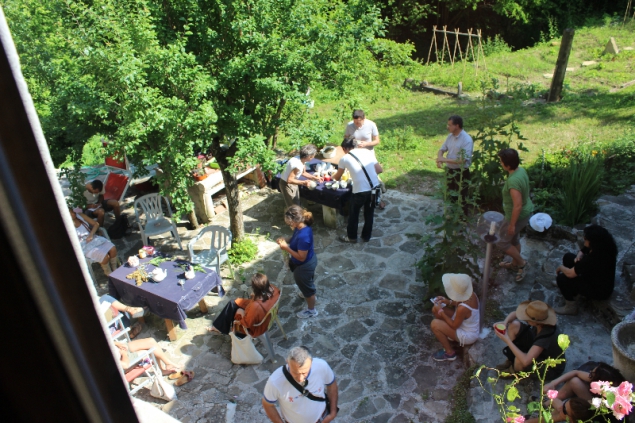 It happened that I could stay at an event called ‘Erbe delle Streghe’ with Loretta Stella in Val d’Erica, a location near to Borgo Pace in the Marche. The event took place in the woods of the b&b ValdericArte which very often offers special events. 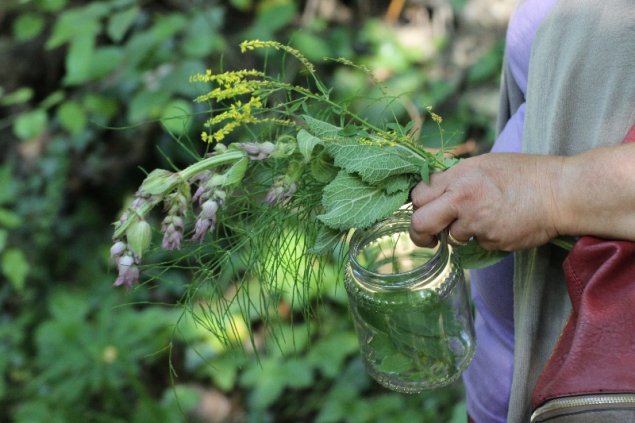 About more than 27 people called during the days before to book a place also for dinner. The works were frenetic in the small bed&breakfast. The telephone always ringing, kitchen preparations for pizza dough, fresh homemade bread, desserts with herbs and roses.. Unimaginable how ‘weeds’ can be tasty! 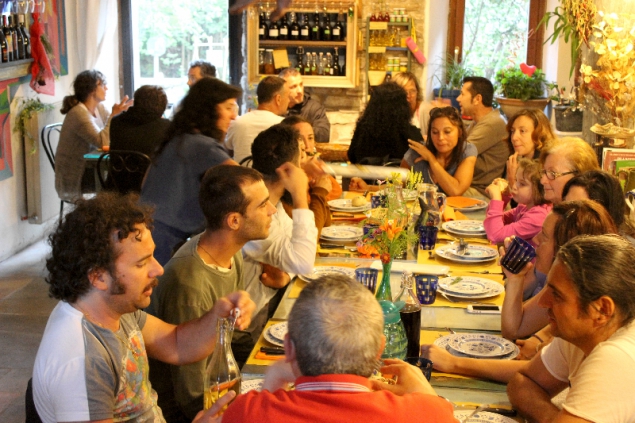 The first guests arrived just after setting the dinner table and from then the whole day was full of chatting, interesting discussions about what healing in natural ways can do and how important it is to have some knowledge about all the ‘weeds’ we are often trying to eliminate. Without knowing even how tasty they can be as a meal. 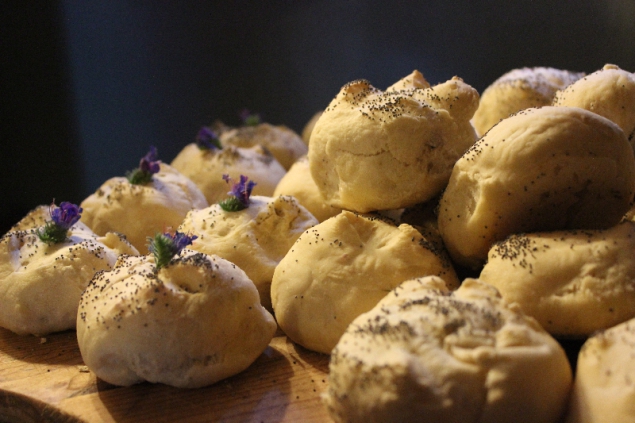 Of course more women than men but all very curious, they asked a hundred of questions to Loretta Stella which is a woman who decided 20 years ago that her life is in nature and as much as possible independant.

She was so kind to answer all questions, honest, and explaining and showing during a walk the plants to find in the wilderness and which one to have absolutely in the garden for first aid for example.

I loved to listen to her voice, rough but kind, knowing so many things and willing to share her knowledge with whom is interested. 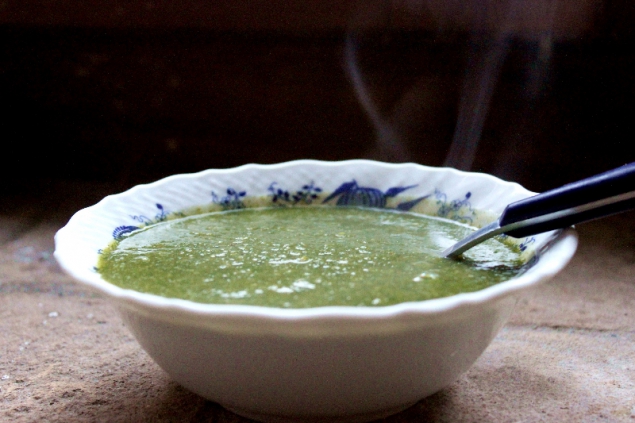 When it came to dinner time, all where so curious about what this herbal dinner will bring. Great looking rolls decorated with flowers, salads mixed with rose petals and pink clover flowers, scrambled eggs with chives, strozzapreti with mint and a very special dessert, a kind of custard with rose water. And much more… 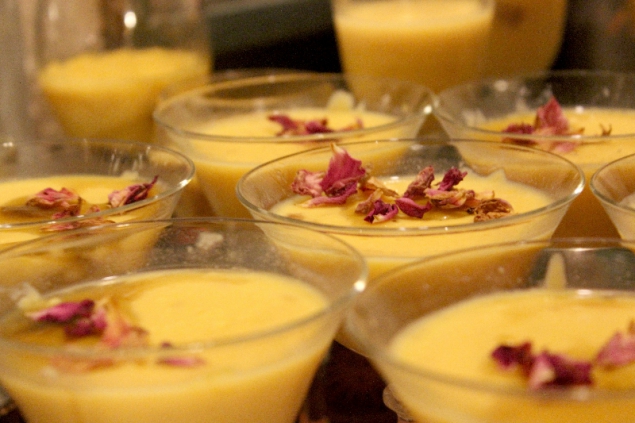 The final of this really rich day was a great bonfire in the gardens. Everyone around, throwing herbs like St. John’s Wort and six others into the fire against bad influences of witches and demons, and some of them jumping over the fire with a wish – that will realize hopefully within this year.

I learnt a lot, had great discussions with the guests and loved to see everyone satisfied and going home with something new.

Have you ever participated in an event for St. John’s day, a solstice in some place in the world? Let me know where and how different it was. Leave a comment… 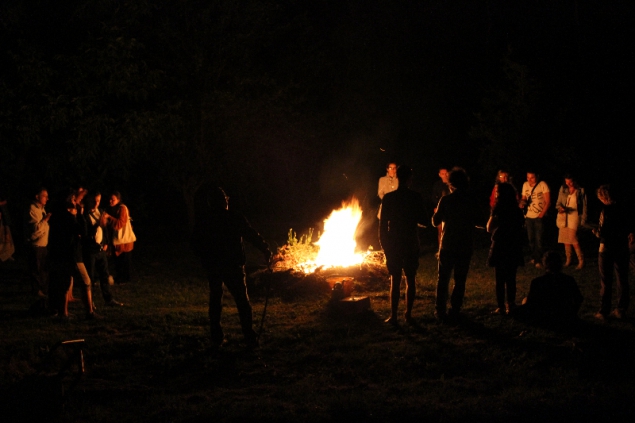 If you want to do your own Saint John’s Wort balm:

Put the oil into a small pot, add the bee wax possibly grated before and let it melt in a Bain-Marie. Take off and transfer quickly into small glasses. It will firm up very fast.

You can use this ointment for skin problems like insect bites, burns and stings. As said before it’s great for light depressions and anxiety but also for sleep disorders. You can use it as well for kidney disorders, migraines, hemorrhoids, stomach problem and even with malaria. As ointment, rub it on the place where it’s need. 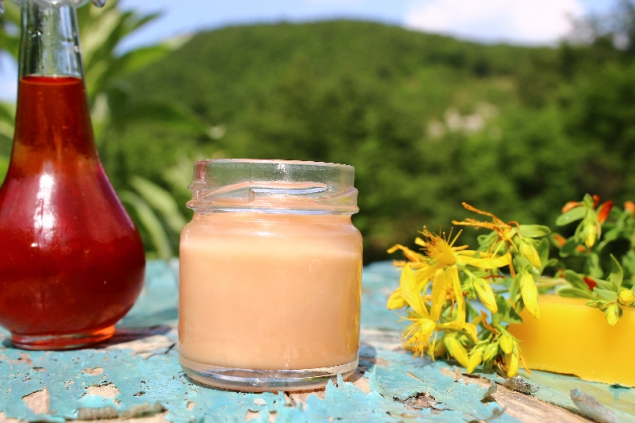 If you want to do your own oil of St. John’s Wort: 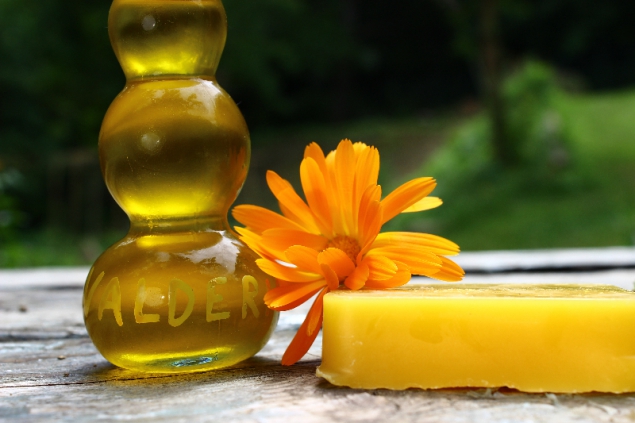 The Colors of Angels
Hildegard of Bingen and Trota of Salerno - Female Physicians in the Middle Age
Cavemen-Meeting in the Italian Appennines
This entry was posted in CRUMBS, events, Italy, Marche, ON TRAVEL and tagged b&b Valdericarte. Bookmark the permalink.