Enlightenment between Marble and Art 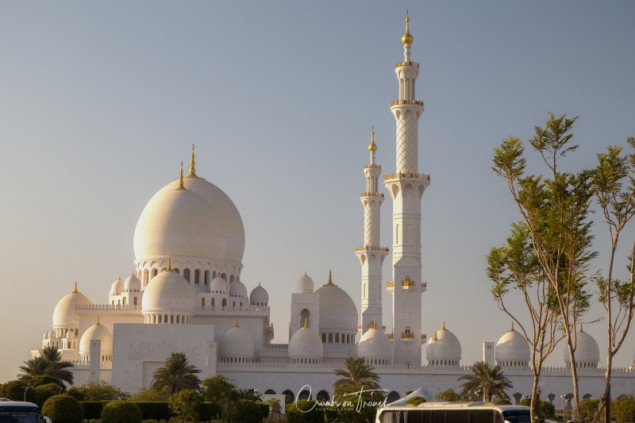 One of the most beautiful places where to worship the own beliefs is the Sheikh Zayed Grand Mosque, also called White Mosque, in Abu Dhabi in the United Arabic Emirates. I visited this amazing place last summer and was so enchanted of so much beauty. 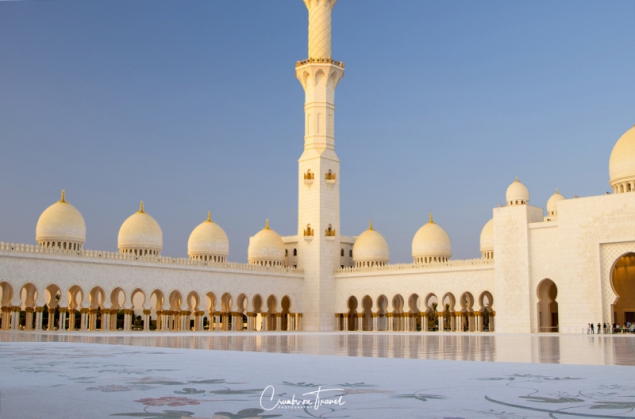 On our second day in Dubai we had booked an afternoon tour to the famous and largest mosque in the UAE. It is located just an hour and a half from Dubai and would be a 6 hours tour in all. We were looking forward to it.

Our tour started already in the hotel with choosing what to dress. We both opted for long, wide pants and a loose long-sleeve shirt and of course a big headscarf. It should be alright.

The tour started at our hotel were a taxi transferred us to the mini-bus. All in all we just were 13 tourists plus the guide and a driver. I was smiling as we had 4 women (Americans) all dressed sexy but no make-up and 4 women (Dutch) all dressed already in the abaya and head tightly covered, all in black and faces with tones of make-up. More contrast would not be possible.

Our guide was great. He, like many others in the UAE, was from another country but could give us really great information about history. He had the amazing gift to talk in a way like he is proud of (t)his country.

We learnt that on the highway you see the ‘border’ between Dubai and Abu Dhabi on the surface of the road (one is darker, one brighter) and on the streetlights that change a little (Dubai roads have 2 lamps, Abu Dhabi roads have 6 lamps).

We drove through a petrol/gas station that was built in a theme. We all recognized it immediately: Mad Max. That was real fun! And I noticed that there are ‘automatic police stations’: the area has video surveillance and in case you need a police officer you press a bottom and talk to a police man who apparently can see you. I am not sure if that is really working. But crime is not that big deal in the whole country I think. 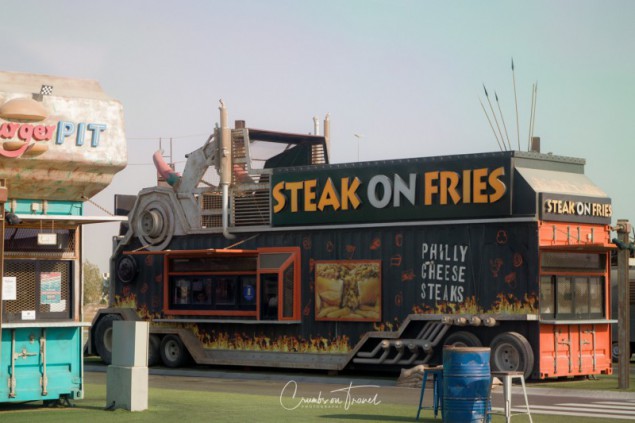 When we arrived to Abu Dhabi we got some instructions about our comportment in the mosque area: no obscene or scatalogical gestures, always stay dressed appropriate, no screaming, smoking and strange photos. Well, for me that was all very obvious, we were to enter a religious place and there must be respect. But as we had young people with us (the 4 and 4 women) it was better to underline again, I guess (I know in western cultures people sometimes enter a church in flip-flops, shorts and spaghetti straps top). The women with no appropriate dressing got the abayas, my friend and myself were perfectly dressed.

We passed through the security in the SZGMC where we had to enter first our nationality, where we stay, age and some more information I don’t remember. I guess for the statistics and also for security in case someone would do something wrong.

Our guide continued to show us the mosque, telling us about the history and all to know about and after an hour we were left for free roaming. 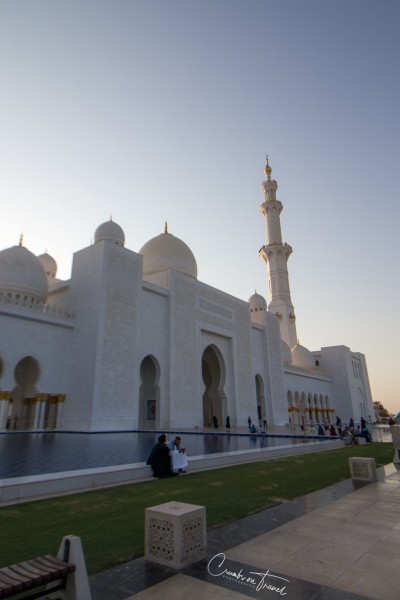 The White Mosque is located in the capital of the United Arab Emirates. It was constructed between 1996 and 2007 and designed by a Syrian architect, Yousef Abdelky. The whole complex is 290 meters/950 ft by 420 meters/1380 ft, excluded the huge parking area. The mosque is facing Mecca in the west.

The design is a mixture of Persian, Mughal (India) and Egyptian mosques.

It was Sheikh Zayed bin Sultan Al Nahyan who wanted to unite culture diversity of the Islamic world in ancient and modern art and architecture. He is also buried in the adjacent grounds to the mosque. You find the typical Moorish style in the arches but also the Arab style in the minarets.

It was an Italian company to build the mosque, employing more than 3.000 workers and 38 sub-contracting companies. Materials like marble, gold, ceramics, crystals and semi-precious stones came from all over the world.

The amazing chandeliers you can see are from Germany manufacture and has millions of Swarovsky crystals incorporated. The largest of the seven has a 10 m/33 ft diameter and is 15 m/49 ft high.

The water pools around the mosque are already amazing in the daylight but at sunset or night they are breathtaking with all the lights and columns reflecting. I couldn’t stop taking photos as you can notice.

There is a library and a huge visitor center that is also place for education and visitor programs.

All in all, Sheikh Zayed bin Sultan Al Nahyan, founder and first president of the UAE, has had a magnificent vision of beauty. I can not find words for such an amazing place. I was very much impressed by the beauty of it. 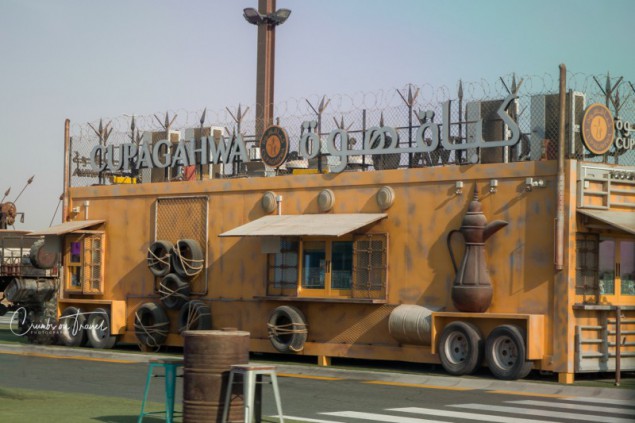 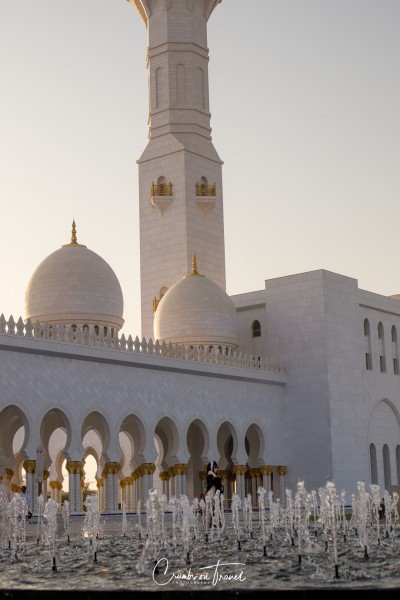 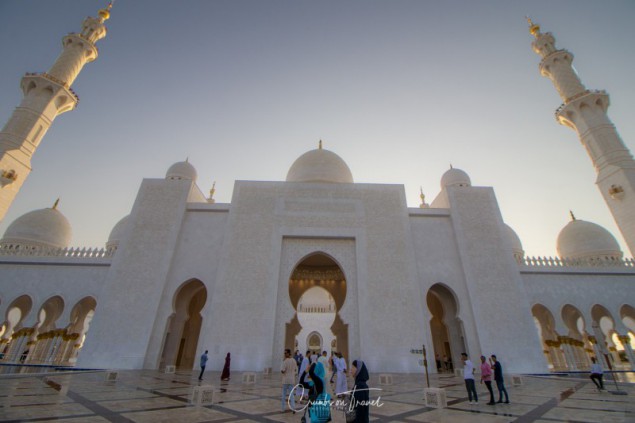 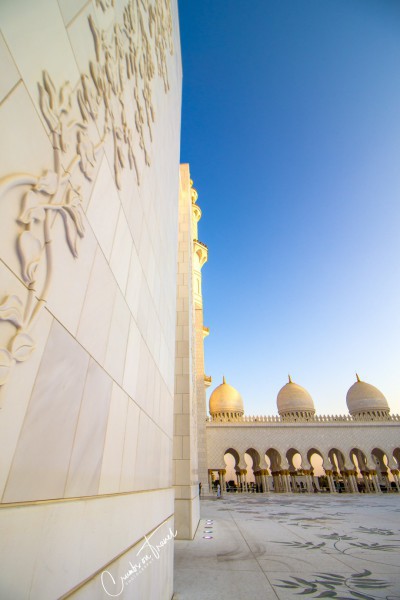 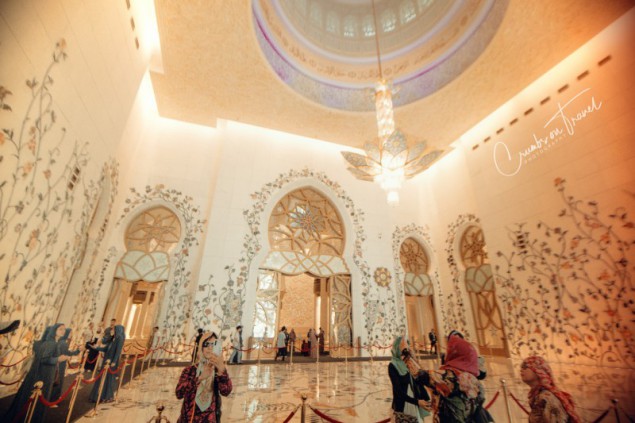 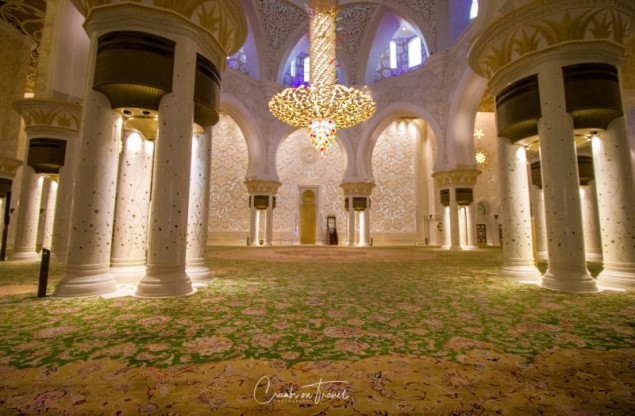 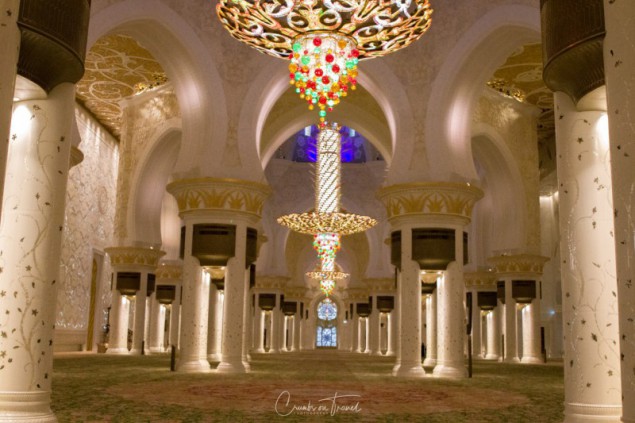 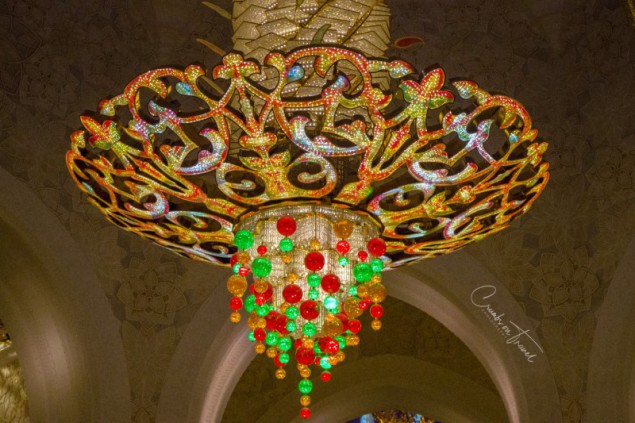 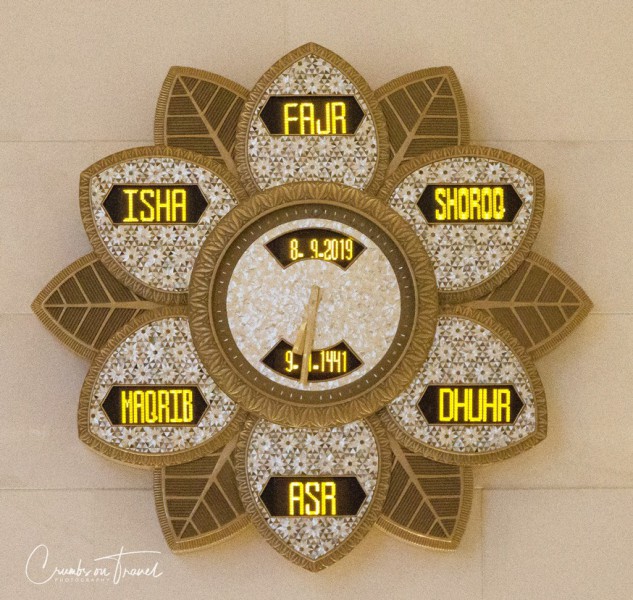 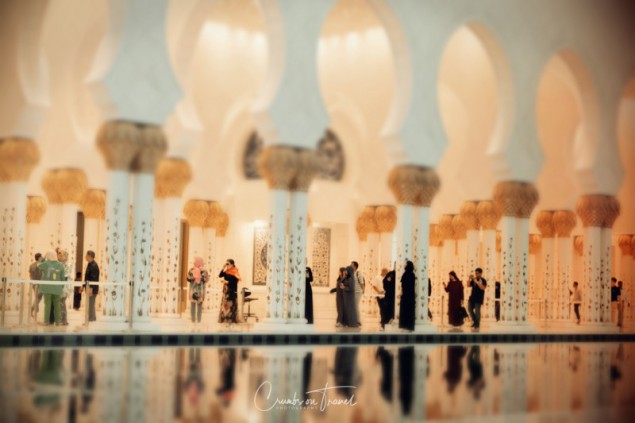 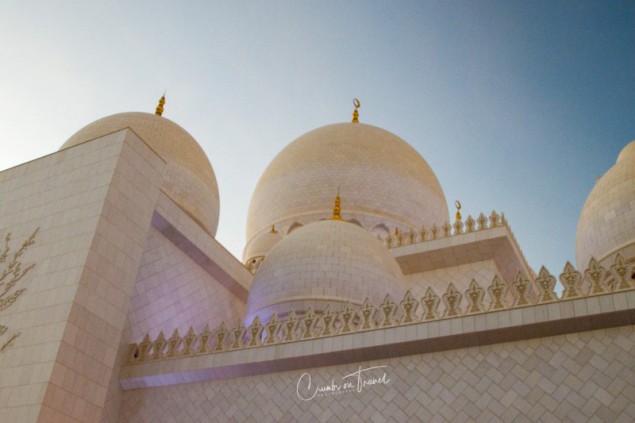 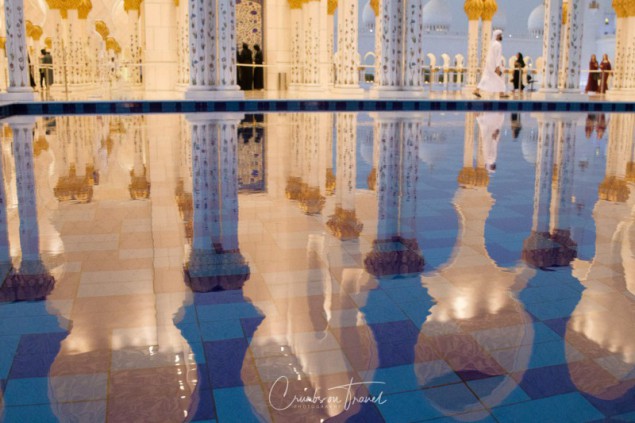 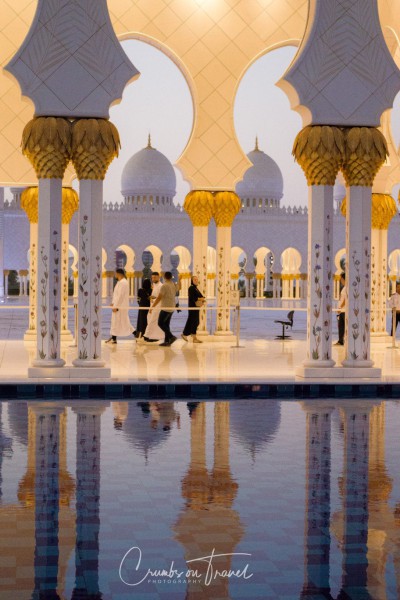 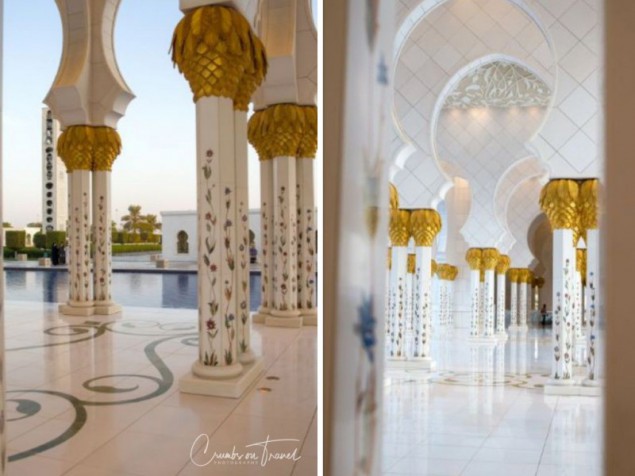 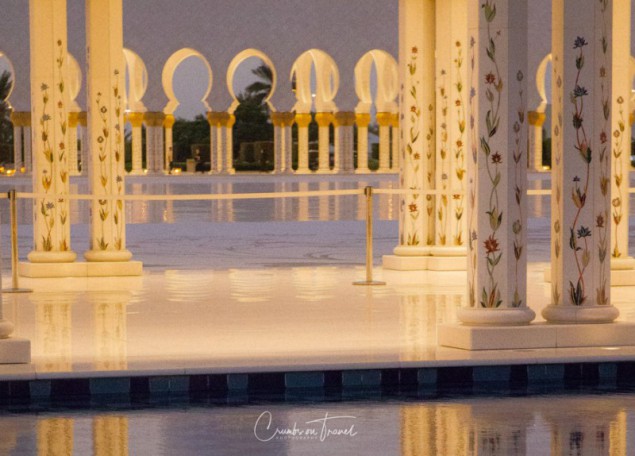 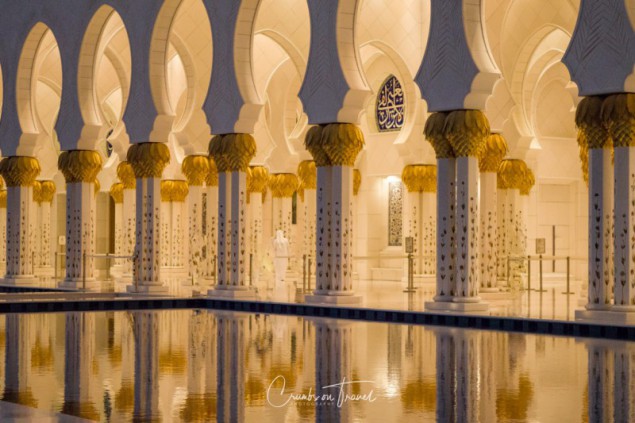 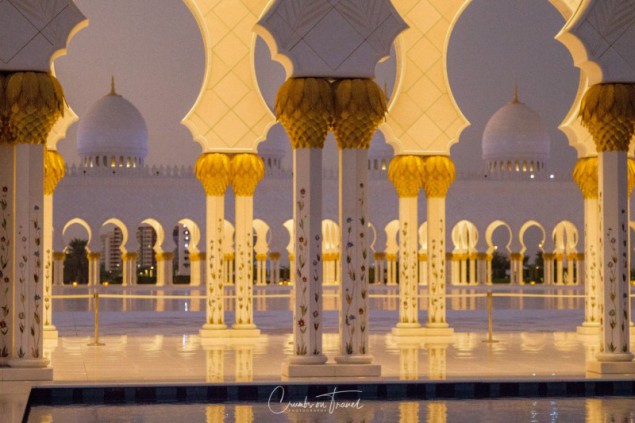 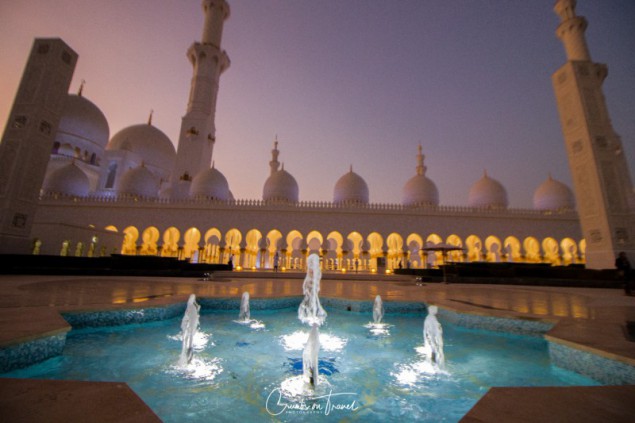 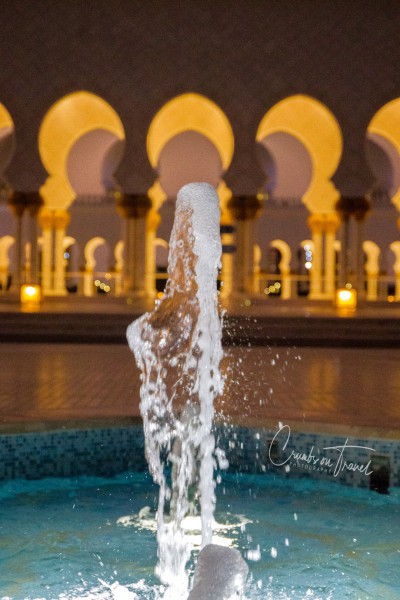 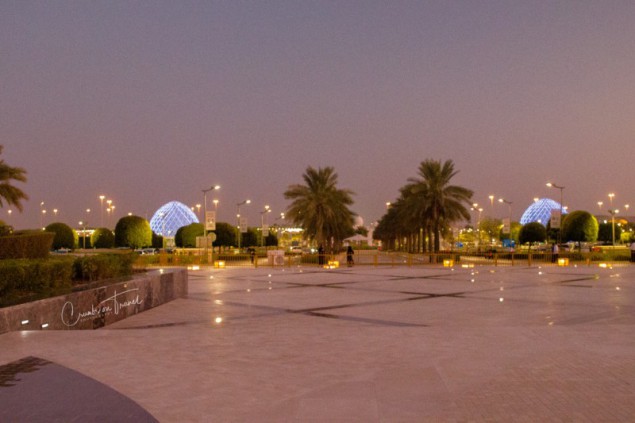 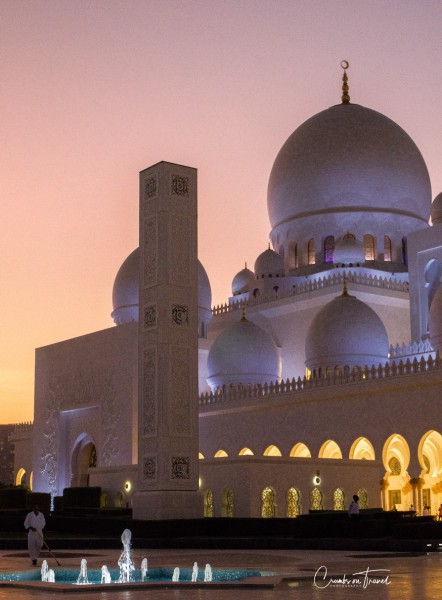 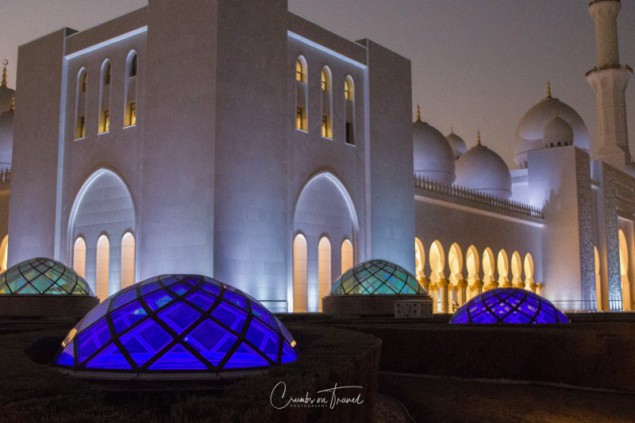 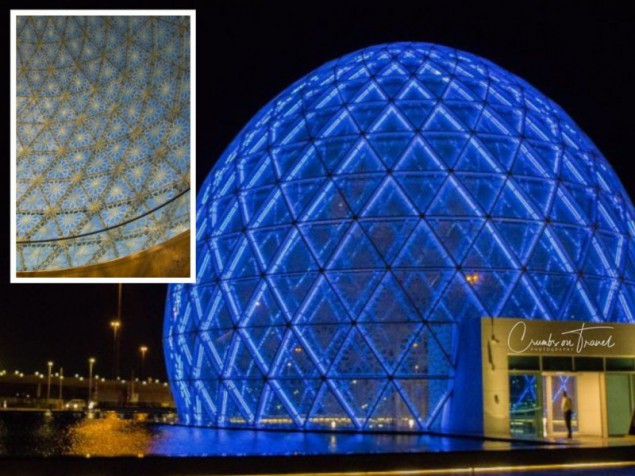 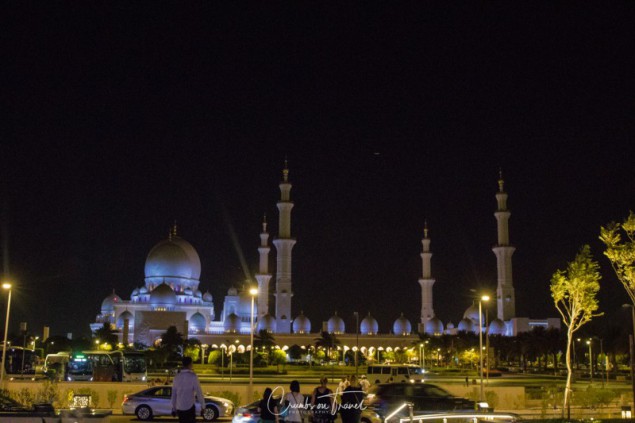 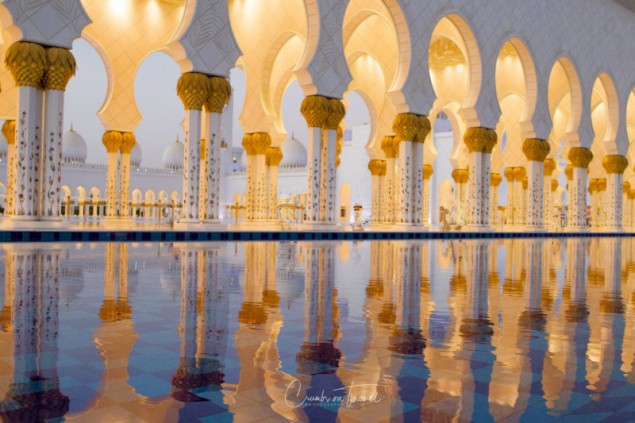 For further information:
The official website of the Sheikh Zayed Grand Mosque Center
You should respect the dress-code and wear the right before going