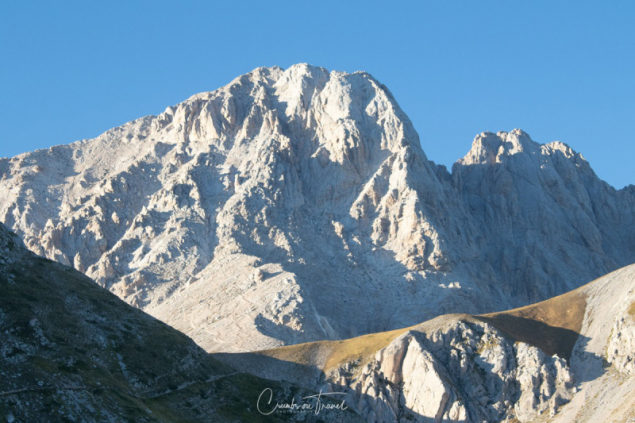 The Campo Imperatore is the highest plateau in Italy, called ‘Little Tibet’ and is a location of many movies. Hundreds of trails to hike, the highest peak, the Corno Grande (2.987 m), where you can experience the alpine glow during the sunset and an observatory.

Last weekend I traveled through parts of the Gran Sasso e Monti della Laga National Park, one of the biggest in Italy. The Apennine Ridge was on my list, and I was happy to have the opportunity to go with someone who knows the area. 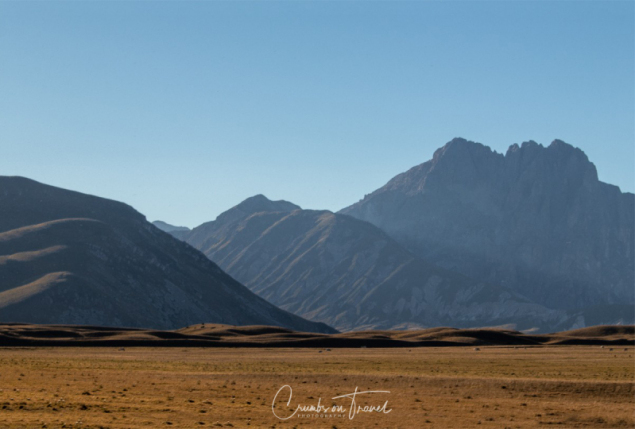 I saw many photos of the grassland or steppe that reminded me Mongolia. And then when reading about it I discovered it was (and is still) a popular movie destination. Movies like Ladyhawk (with a beautiful Michelle Pfeiffer and great looking Rutger Hauer), The Name of the Rose (who didn’t read also the book?), The American (even George Clooney came that high) are only some of the many films and Westerns using the incredible scenery of this magic place.

After driving through little mountain villages that reminded me of villages in Tyrol and South-Tyrol, thick forests of conifers and broadleafs, changing into the typical harsh and dry Mediterranean landscape, it changed completely again arriving higher and higher to the plateau.

The 27 km long and 8 km wide open space was once formed by glaciers and alluviums (loose and unconsolidated sediment reshaped by water like rain). Nearby you find the Calderone Glacier and the Gran Sasso (2.476 m). It’s much cooler here and near to the observatory I started to get cold. We were around 1.900 m high and it’s windy. I had just a sleeveless shirt and a long-sleeve jacket on. There is also a hotel, where people who love to ski during wintertime can stay. The hotel became famous in 1943 when Benito Mussolini was imprisoned here for a short time. 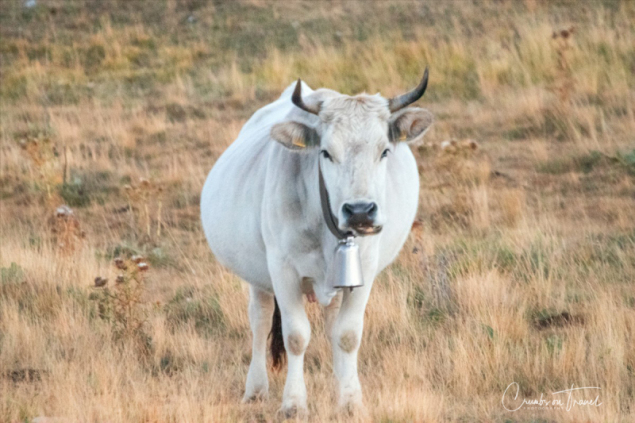 There are some little hill towns that still today look like from a complete different era, and once ruled by the Medici. Famous is Rocca Calascio, one of the highest fortresses in Europe.

It is place of a huge biodiversity and home of more than 2.360 plant species, many endangered ones among them. Wolfs, wildcat, chamois, wild boar, foxes, golden eagles and even brown bears (who sometimes roam in the mountain villages) are all wild-living animals. Semi-wild I saw herds of horses, sheep and cattle.

The observatory CINEOS was founded in 2001 and since then made important discoveries of new stars and planets. Nearby there is a little bar where you can also eat something, drink beer and more. Some stands are open as well. 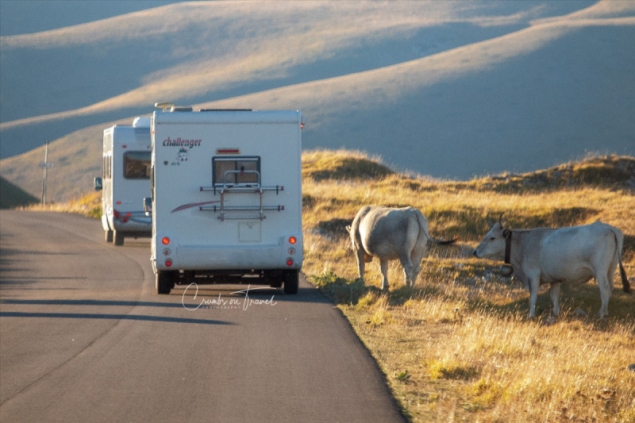 I arrived in the late afternoon. A perfect sun came over the peaks, the whole plateau started to be bathed in a soft light. It was just amazing, how flat and wide the place looked. Many campers around, ‘herds’ of motorcyclists everywhere. There is a place where you can stop and buy meat and grill it on open fireplaces by your own. On the way out many of them already put down tents to pass the night here, to watch the stars without any civilization light and to live a breathtaking sunrise. I am tempted!

It’s definitely a place where I will return when there are flowers in autumn (crocus flowering) and in spring. But it is also closed for half a year due to snow and bad weather conditions. Hopefully I can go with a friend when she comes over to visit me in October! I would love to show her so much beauty. In any way: to take information about the roads and weather forecast is very much recommended. 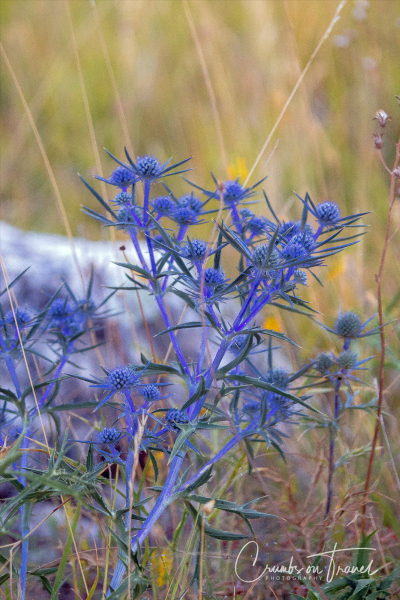 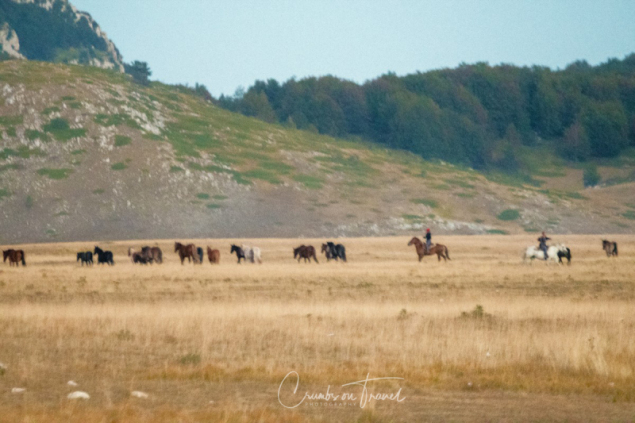 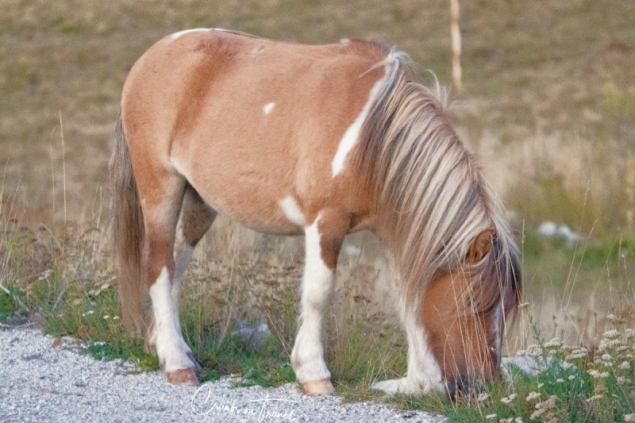 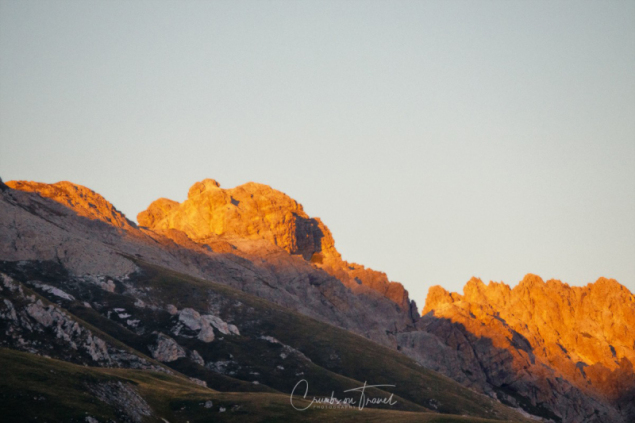 For further information:
Abruzzo Tourism
If you want to visit the Park take some information before!

Exploring the Region of Abruzzo (II)
Lofty City of the Roman Empire: Alba Fucens
My Secret Escape in Abruzzo
This entry was posted in Abruzzo, Europe, Italy, ON TRAVEL and tagged abruzzo. Bookmark the permalink.