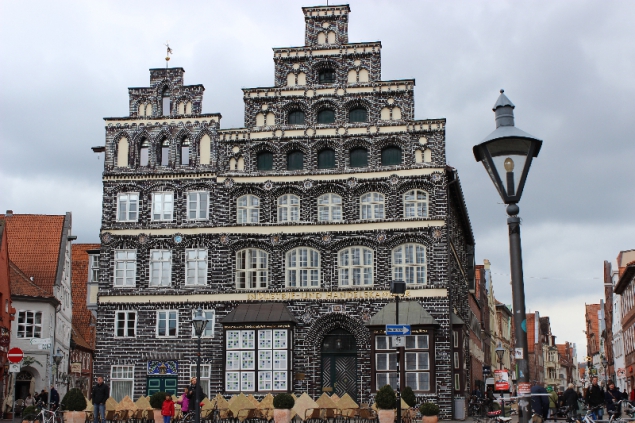 Lüneburg is a member of the Hanseatic League and was once in the early middle age an important town for salt. My mother passed a lot of her youth in this city and so I was curious to see the town as an adult as well. 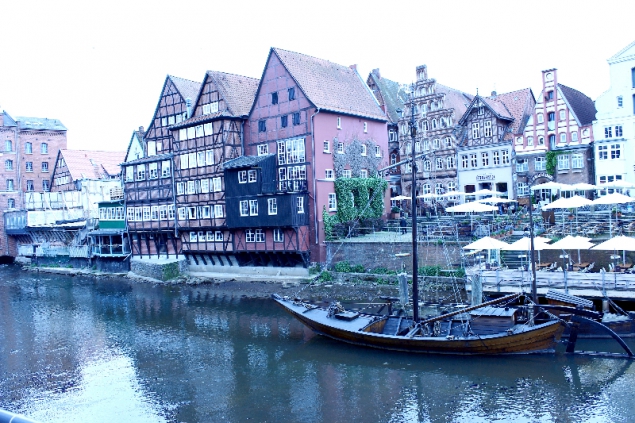 But the main joy of my coming to Lüneburg was a totally different: a friend of mine, my Turkish ‘sister’, was in a nearby town for a few days for a friend’s daughter’s wedding. And we had the possibility to see each other after 7 years.

So almost days before I was so excited that on the morning of that day I took off an hour earlier than I needed. Staying in a friend’s house in Travemünde it would take me two hours to drive there. A perfect timing that I was in Germany the very same week as well. 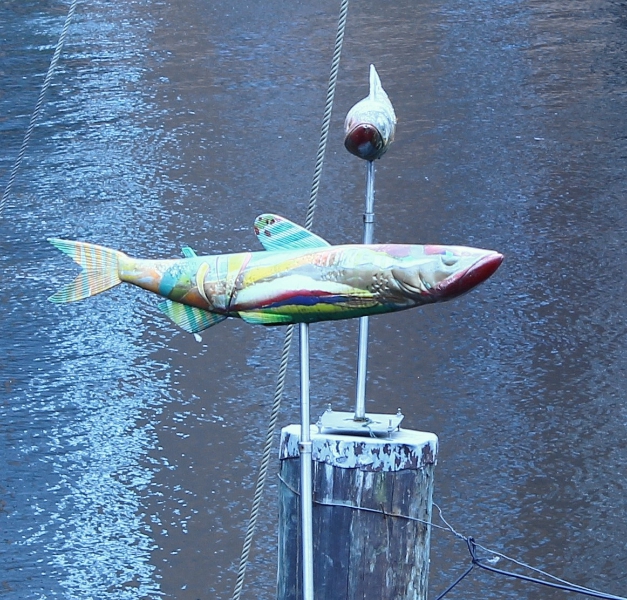 We met at the station as a central point. Her husband was with her and we were so happy to see each other. She speaks a perfect German, her husband unfortunately had to wait her translating our chats. Some of them 😉

We walked through the old center of Lüneburg which is not too big to do in one afternoon. 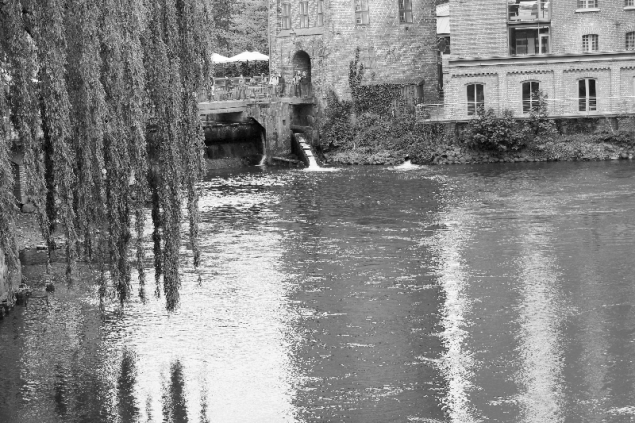 At the harbor there are still a few cogs – as museum. Once there were a lot of them carrying salt into bigger ports like Lübeck. Salt in the middle age was used often in this area for herring and other fish of the Baltic Sea. With salt they were ready to be shipped inland. Here we saw an old crane, a wooden structure that is still in work today!

Saltworks stated here already in 900 AD after discovering a salt pool by hunting a boar. Salt was the ingredient that made the village to a prospering town and one of the most important on the old salt route going to Lübeck at the Baltic Sea via Lauenburg. A reason why the Hanseatic League was so powerful and wealthy. But 600 years later the decline stated as more salt came also from other places and in 1980 only the last salt mine closed. Thousand years tradition’s end. 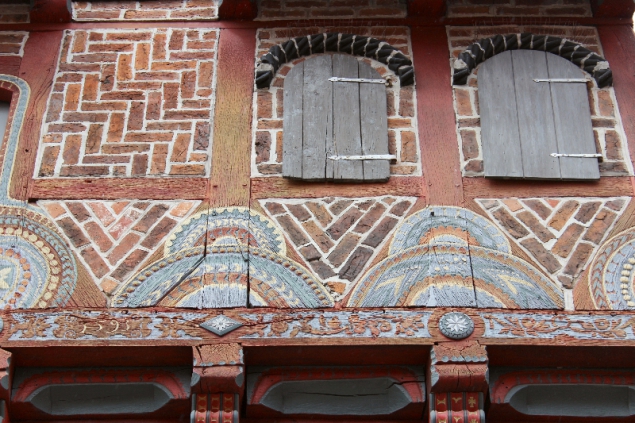 Strangely Bardowick – I passed it before by car – was the major city and Lüneburg only a part of it. When in 1189 it refused to pay allegiance to Henry the Lion it was destroyed and Lüneburg became officially a town. 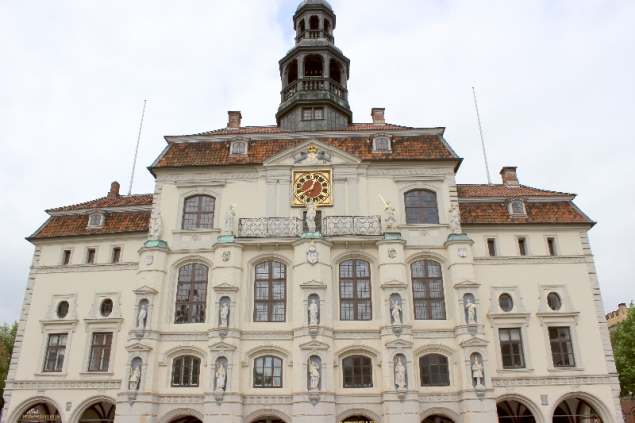 The town has many beautiful buildings. Many still in brick architecture like in the Hanseatic cities Lübeck, Wismar, Rostock or Hamburg. Some are plastered but have still the old style that makes these cities and towns so suggestive.

We visited the St. Nicholas church, a huge building with an amazing interior. I love the Gothic style, the high vaults and the pastel colors they often paint these churches.

Did you know that Johann Sebastian Bach was a choir boy in the St. Michael church from 1700 – 02? And that the parents of Heinrich Heine lived here as well?

It would have been interesting to go on the old water tower as it is today an observation tower.

One of the most amazing entrances I saw was the entrance to the Rathsapotheke (town chemist’s). It’s dated to 1598.

There are a lot of events as well during the year like the Lüneburg Blossoms in April, the Heath Flower Festival in August or the Master Salter Days in October. In 2012 Lüneburg hosted the Hansetage. This years they will be in Lübeck and me there as well! 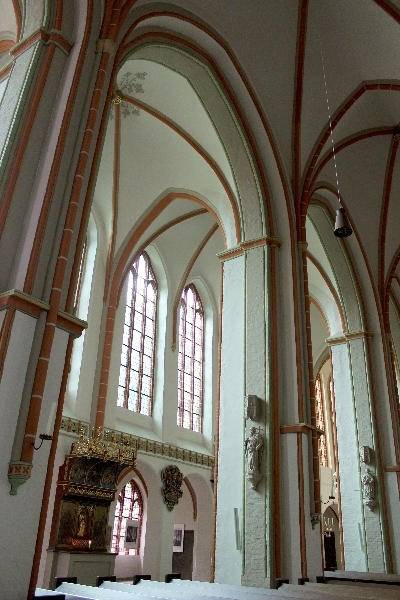 The three of us had a really nice afternoon in this place, walking around, having some coffee somewhere and eating from the many stands offering for free such cheese, meat, fish and vegetables. So we skipped the lunch because of eating around for free on the market and several shops. We bought some smoked salt – very special and very typical for the salt town.

Anyone here who has been in Lüneburg? In any case a place to recommend! 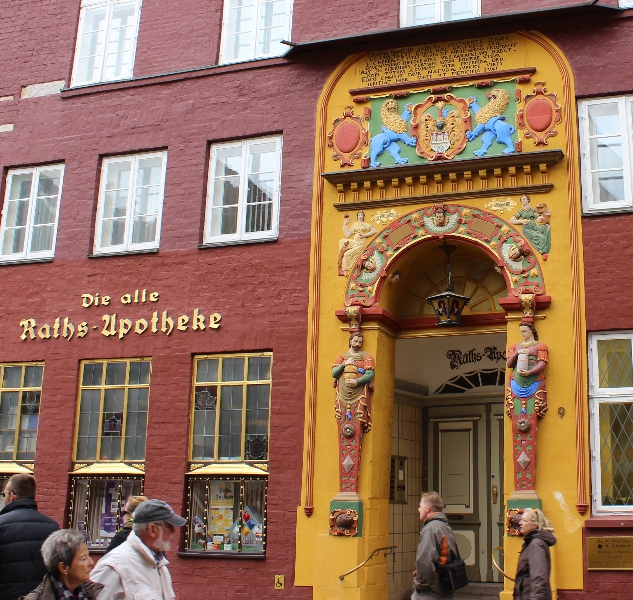 Ostriches Farming - South Africa in North Germany
Weekend of Open Gardens 2020
The Sphinx of Flensburg
This entry was posted in Europe, Germany, Lower Saxony, ON TRAVEL and tagged Schleswig-Holstein. Bookmark the permalink.

2 Responses to A Special Day in Lüneburg, Lower Saxony