A Day in Bologna 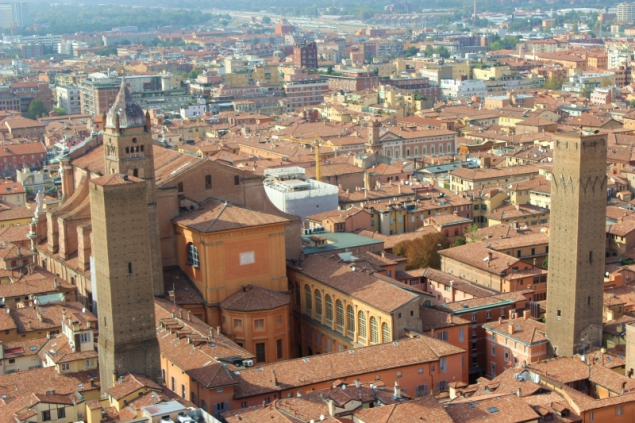 It’s about 25 years ago that I have been in Bologna in a freezing cold winter day. I remember the arcades and that we could walk without getting snowed in. This time it would have been a warm September day I would drive to Bologna airport to pick up my dear friend coming from Dublin, Ireland. 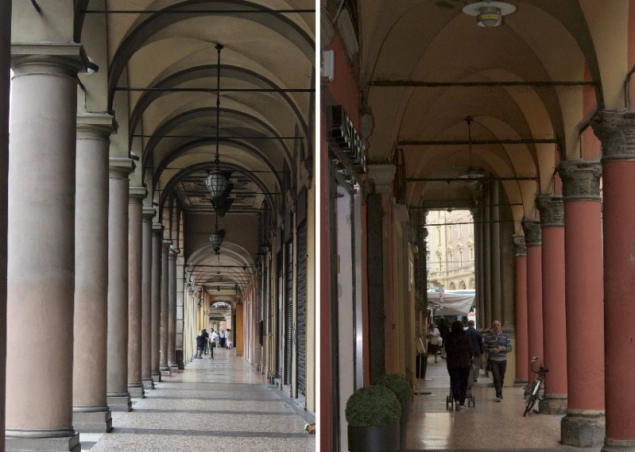 I am currently located in the upper Marche near to Pesaro and so it was just a two hours drive to get me to the airport of Bologna. I arrived in time and we were very happy to see each other and having again a holiday together after a year – and again in Italy.

She booked from home already a hotel stay in the Medieval city and so we started our adventure into the afternoon traffic of Bologna’s inner part. 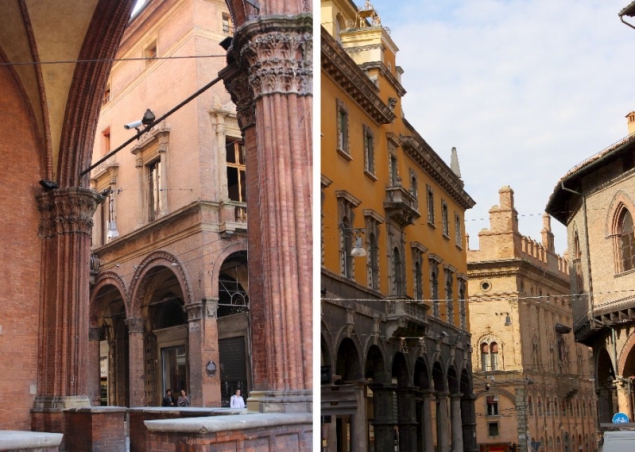 The hotel for the following two nights is situated just in the heart of ancient Bologna. We took our room and left nearly immediately after. We were hungry as we both had nothing to eat since breakfast and we anyway wanted to explore the city.

I had already before a short read about the history:

The city is the seventh most populous in Italy, the largest of the Emilia-Romagna region and the first settlement is dated about 3.000 years ago. The Etruscans called her Velzna and the Celts Bona which came to Bobonia under the Romans. She hosts the oldest university of the world founded in 1088 and is still today a city of students. Which gives her a very international, culture rich and lively character. 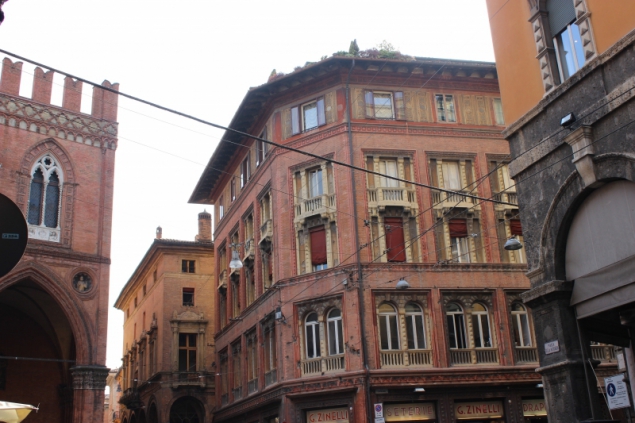 I especially appreciate the city for her many kilometers of porticoes under which one can walk in summer in the shade and in winter protected from rain or snow. The historical center is one of the largest in Italy and well protected and cared.

The city has a beautiful old town where modern art doesn’t interfere in the old architecture and monuments. Medieval and antique buildings, churches and piazzas are a perfect layout.

The city is as well a crossroad for Northern Italy and in the surroundings there are a lot of industry headquarters. Interesting: it’s the first city in economic growth in Italy. 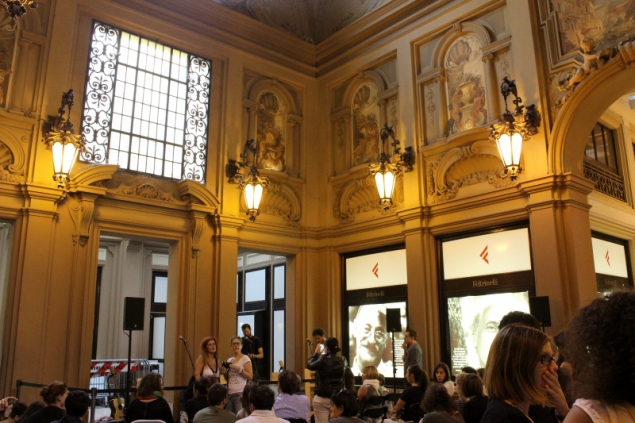 In 2000 Bologna was declared ‘European Capital of Culture’, in 2006 ‘City of Music’ by UNESCO and participated 2010 in the ‘Universal Exposition’ at Shanghai together with 45 other world cities. It is long time the top city in terms of quality of life.

I was excited to be here and see the city with different eyes than 25 years ago in a cold winter eve. 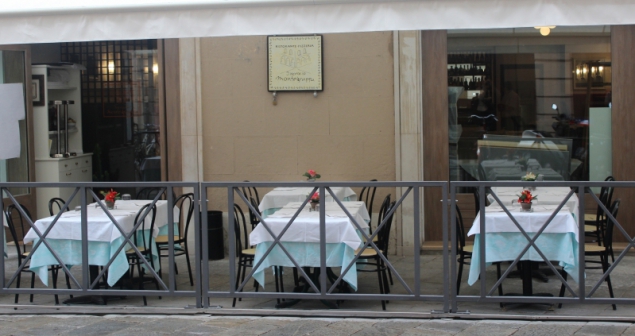 This first afternoon in Bologna we just were wandering around having a look here and there into the shops and waiting for the first restaurant to open and give us food. We were lucky to know a restaurant owner when taking our afternoon espresso in a bar and who would open to these two nice ladies half an hour earlier and serve us a wonderful huge mixed salad. Our day was done!

With much ease and a complete satisfied belly we walked slowly back to the hotel. 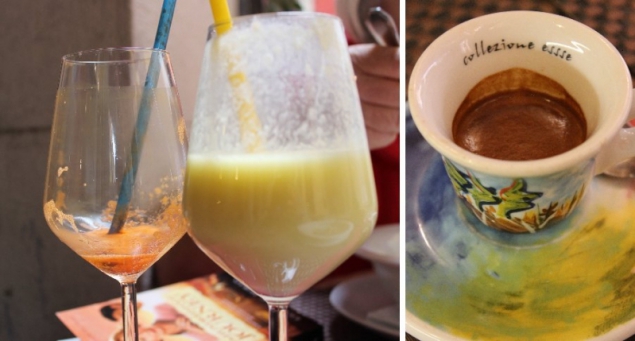 The next morning we had a short breakfast in the hotel. It was 10 € more but not worth at all. The coffee was so horrible – don’t know if I ever had something like that. The only thing we could eat (or at least me as my friend doesn’t eat gluten but can eat sugar and diary) were eggs, hard boiled and cold. No ham and no fresh fruit, only canned – and full of sugar of course.

But when we left the hotel we had in the first nice bar our espresso. And my day could start! 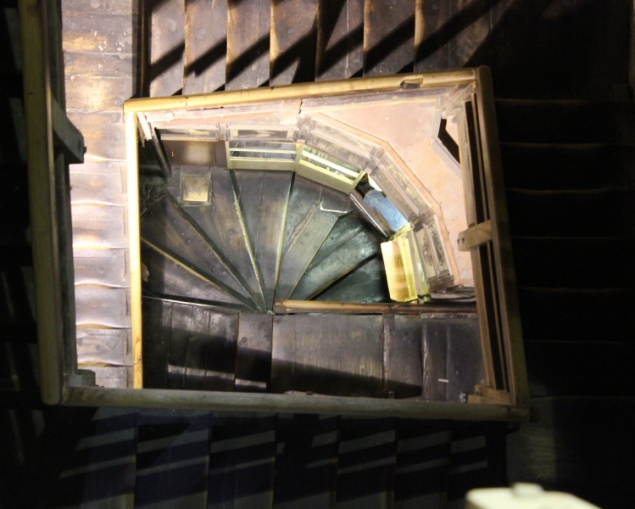 As I had it seen already the day before my goal today was a huge tower. I wanted to climb it up and have a view over the city and surroundings. And that’s what I did. The cost is only 3 € (just to compare with the not even higher and more beautiful tower of Pisa which costs 18 €!) And look what I got after 497 steps. The rest of my breath was taken away by this amazing view!

I could see the Piazza Maggiore, San Petronio basilica, the city hall, markets and places, streets and towers and a wonderful surrounding landscape. I was sorry my friend would not have done it, she would have loved it! 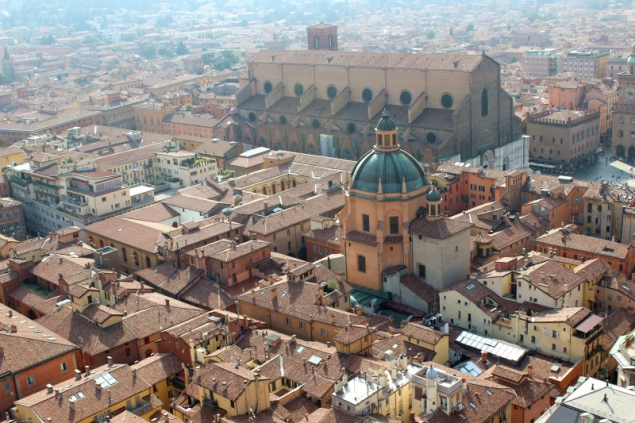 The Two Towers of Bologna are the landmark of the city. Between the 12th and 13th century it is supposed that there were more than 180 towers in the city. Like in many other Medieval cities with towers (e.g. San Gimignano) the real reason for so many towers in a city is unknown but they think it has something to do with ‘I want to have the highest tower’, means: a power or status question.

Later towers were demolished or just fall apart, some were used as prison, deposit, shop or still as residential building. In 1917 was the last demolition. There are still around 20 towers in Bologna.

The tower I climbed is around 92 m high and is called Asinelli Tower. The Garisenda Tower at its side is only 48 m high and much more leaning (3.2 m). 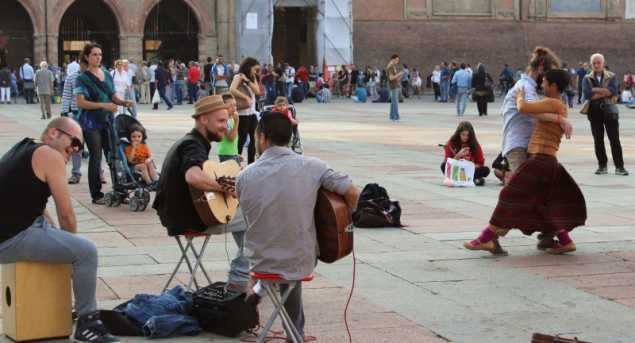 During the day we had a lot of window and real shopping, a great meal and some more sight-seeings.

For example the Piazza Maggiore, the Neptun well and the basilica (NO photos aloud inside). We had a short stay in the ex-church San Giobbe where there was held a concert and packed with students. I admired the facades and especially the arcades of the city and houses. The traffic in the inner city is reasonable and doesn’t really interfere too much with walking here. 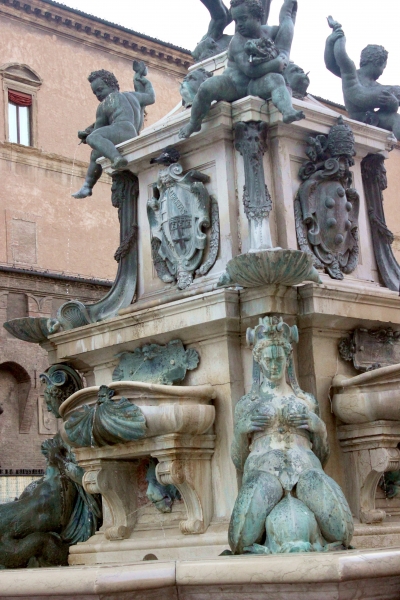 We got back to the hotel for dinner and the next day we left for Le Marche for our holiday time.

Bologna is definitely worth for another stay and maybe having more sight-seeing. I will be in Italy again for a short while in November and maybe before Christmas time the city is a great choice. 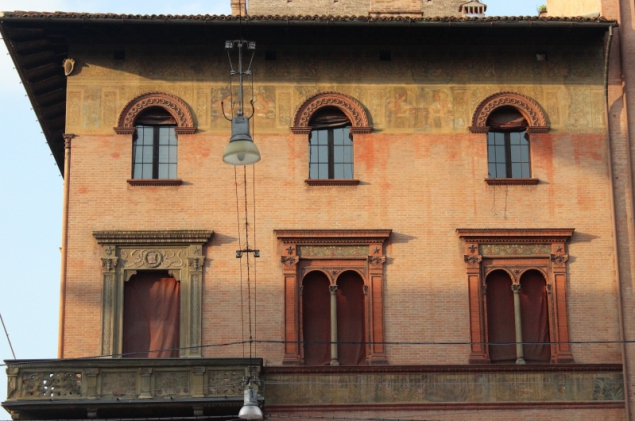 This entry was posted in Emilia-Romagna, Europe, Italy, ON TRAVEL and tagged Emilia Romagna. Bookmark the permalink.