Walking Through the Hadrian’s Gate in Gerasa 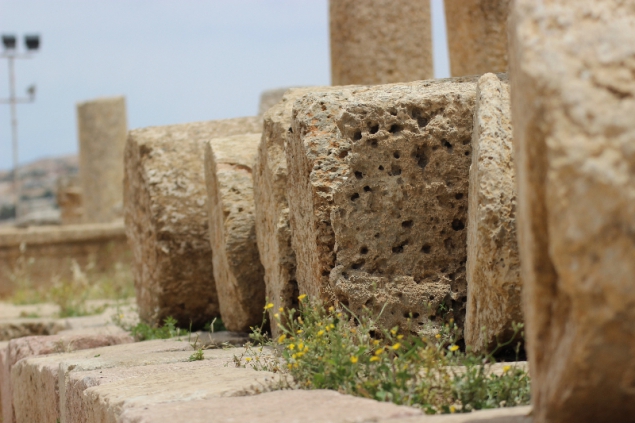 It was like in impact: the first sight of the Hadrian’s gate in Gerasa. It is not even the entrance of the city itself but definitely the most beautiful gate I have ever seen in all the places I have been yet. Huge, in a perfect stage and highly decorated.

Jerash, as it is also written, is situated just 48 kilometers north to Amman and not too far away from the Syrian border. Naked mountains and green, fertile valleys make the landscape. The ancient Gerasa was re-discovered only in the 19th century by a German orientalist, U. J. Seetzen. 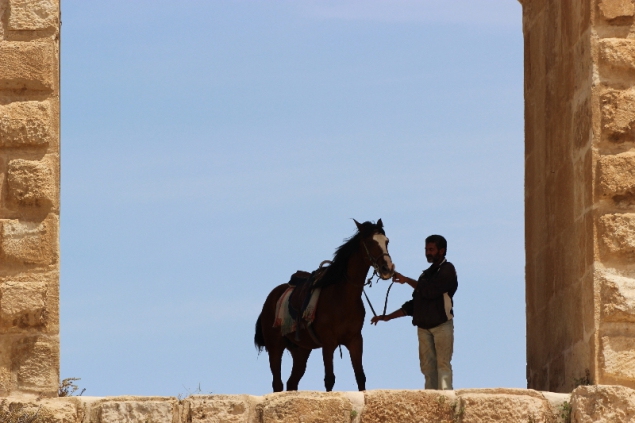 The city is of Greco-Roman origin and was maybe founded by Alexander the Great himself or his general Perdicas. The name Gerasmenos means ‘aged person’ which maybe refers to aged soldiers settled down here. The period was around 330 BC. Very interesting to me is the fact that Gerasa is also called the ‘Pompeii of the Middle East’ as I am from Naples and know Pompeii very well. But it is not so far from truth just by looking at it. Only: Pompeii has not such a Hadrian’s gate.. 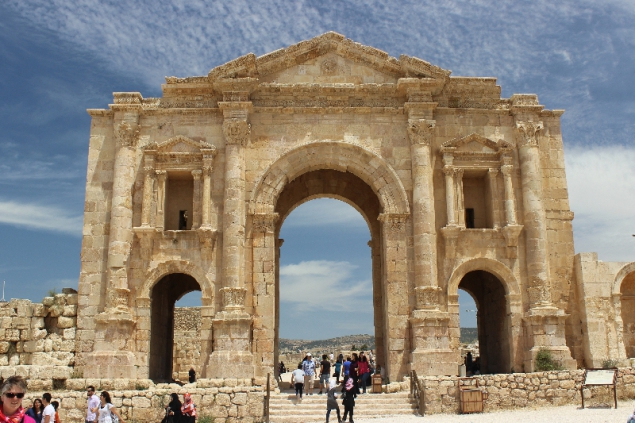 Jerash is one of the Decapolis – ten cities along the ancient eastern border of the Roman empire. The place was already inhabited during the Bronze age but the Romans secured a peaceful life and prospering economics. Though the city was growing also the people came to bring more importance to the place. 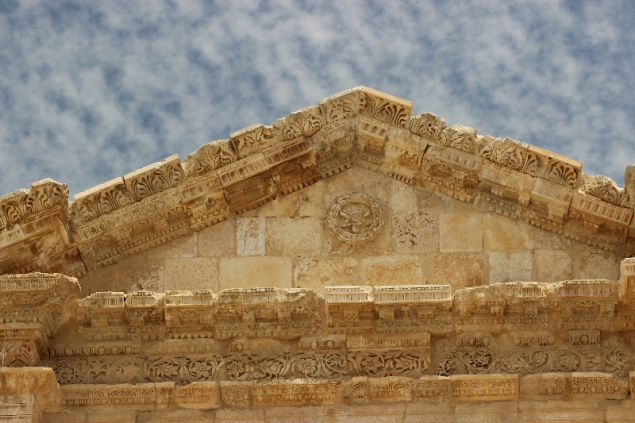 Walking through the Hadrian’s gate – one of the ‘good’ emperors who lived from 78 to 138 AD – outside of the real city we could see on the left the hippodrome which I found unusual, almost near and out of the entrance of the city. The horse standing with the man high above the street – two real Arabic – reminded immediately about ancient times. We came across of the first Christian church, the church of Marianos was built in 570 AD. This church has still a nearly perfect geometric-patterned mosaic floor.

It is situated on the main road to Amman or then Philadelphia and has some subterranean tombs. The church maybe was built by a group of artisans, dyers and potters who lived near to the ruins of the hippodrome where they transformed a few chambers in living quarters. There were found as well mosaic floors and inscriptions. The place was abandoned long before the all destroying earthquake in 749 AD. 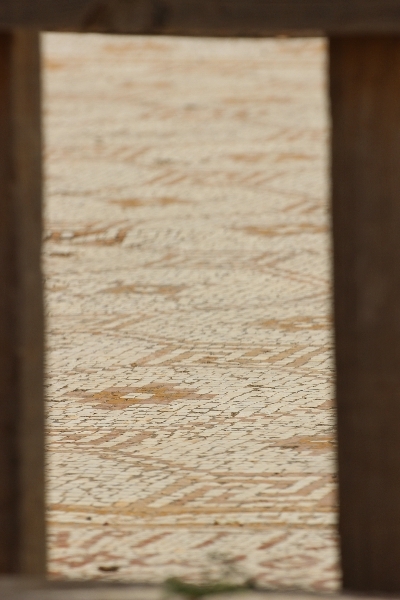 Following the street we arrived to the real entrance gate of the city where also the visitor center is situated. Here we started to walk on the cardo which is one of the main roads in Roman cities going from north to south. The decumanus crosses the cardo in the middle and goes from east to west. These two roads were the main roads in all ancient Roman cities with shops and vendors, lined with columns and at its sides also covered by a roof. Here was the hub of economic life. At the crossing of the two streets there was normally a huge place called forum. 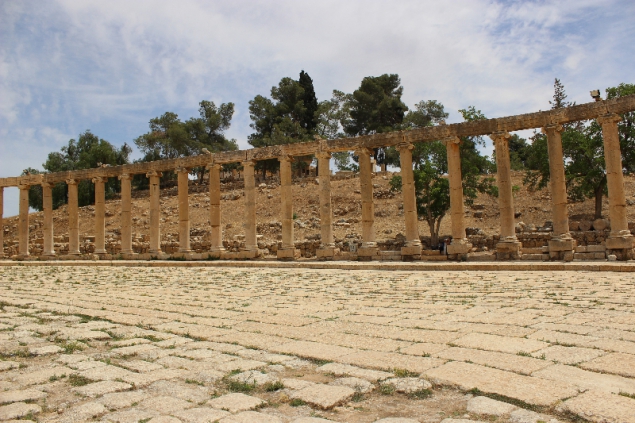 In history the city grew at a size of 800.000 sq m within the ancient walls. The Persian invasion in 614 AD caused a nearly immediately decline with a new flourishing with the Umayyad period. But all finished in one night in 749 AD, when an earthquake destroyed nearly the whole city.

During the Crusaders’ period some of the ancient and destroyed buildings where converted into military stations and fortresses. Good example is the Temple of Artemis.

In the following periods the city was always inhabited but never anymore the same as before.

Since 1920 excavations are nearly continuously until today. 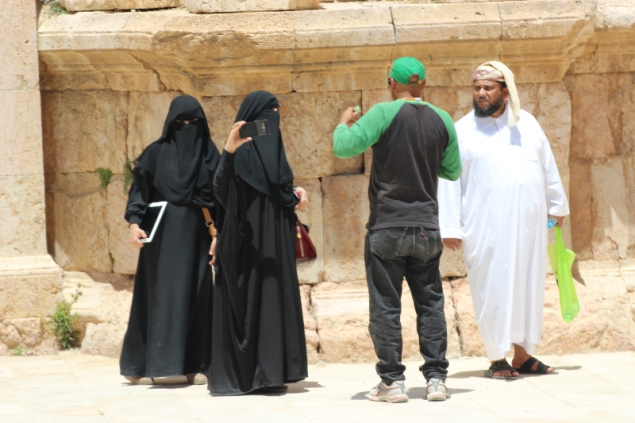 When you arrive at the colonnaded forum take the decumanus on the right and cross the bridge to get to the baths. A huge complex which makes sure how important a public bath was in ancient times.

We took a round to go up to the Temple of Artemis. Here we had such a beautiful panorama view on the whole city. Amazing and definitely a place where to rest for a while and enjoy.

There are two theaters, at the north side and one at the south side which is the larger one. The walls surrounding the whole city are forming almost a complete circuit.

Many of the temples for example were built by donations of rich citizens. During the time a large Christian community grew in Jerash and it had in the end 13 churches within the walls. Many of them have beautiful mosaic floors. There is also an ancient synagogue with detailed mosaics.

The modern town developed outside Ancient Jerash. It lives mainly from tourism as the ancient city is with Petra the main attraction of the country. In the area are living also a lot of Circassians (from Caucasus) and Syrians. 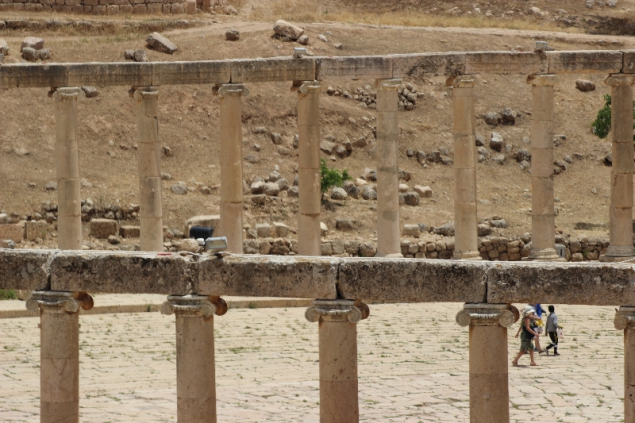 I was extremely surprised and impressed by this city and regretted nearly not to have the whole day to explore. It’s always good to have a private guide and a trip organized but sometimes one wishes to stay by his/her own and stay as long as he/she wishes in a place. Definitely this was one of the places.

When you go to Gerasa try to stay overnight. Or if you can go in summer, when the famous Jerash Festival takes place. Theater, readings, concerts.. a lot of artistic performances in this magic place.

Tell me if you ever have been here and what impressed you most!

Madaba and the Mosaics
Floating Sea – the Death Sea
Qasr Kharana
This entry was posted in Jordan, Middle East, ON TRAVEL and tagged Jordan. Bookmark the permalink.