A Walk in the Old Town of Schwerin 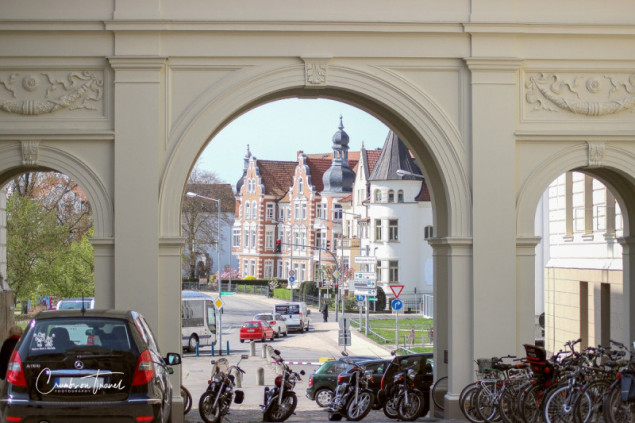 Schwerin is a beautiful little city in Mecklenburg-Vorpommern in East-Germany. It is surrounded by many little and bigger lakes, all have a beautiful nature and the city itself is very nice too.

I came here just for one day because a friend of my mother’s asked me if I would like to come with her just for a sightseeing day. She once lived here as a young girl when she started to work after the second world war. She was in Schwerin in many other occasions later when the border between the both German countries was open but a few years since her husband died she was missing. So knowing me to be always open to new places she thought to go with me.

We had a lovely day, full of sun and warmth, we are matching perfectly with what we want to see and do and we have both the time to do so (she is in retirement and I am a freelancer). 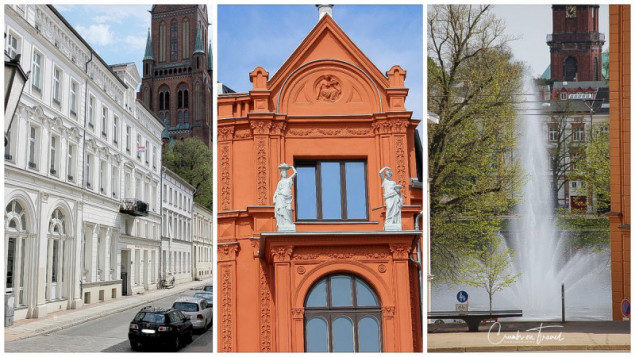 So we started sightseeing the castle and then going into the town center. The name Schwerin comes from a Slavic word and was given by the Slavic Obotrite who had once a settlement in the midst of the lakes. They called the place Zuarin and pronouncing it really sounds similar.

In the 12th century Henry the Lion defeated the Slavic people and expanded the place into a powerful center of the region. In 19th century many people from this place moved to the United States, where especially in Milwaukee/Wisconsin they were settled. Interesting fact!

The town and lands of Schwerin had a moving story and after the Second World War gone to the East German Democratic Republic. After the German reunion, Schwerin again became capital of Mecklenburg-Vorpommern. 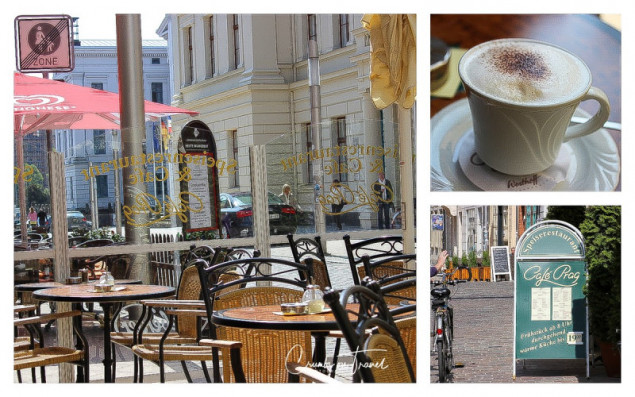 After so much history I needed to drink something and to figure out where we want to go, what to see. We found a nice cafeteria – ”Café Prag” – in the beginning of the old part of the town where we had a nice cappuccino. 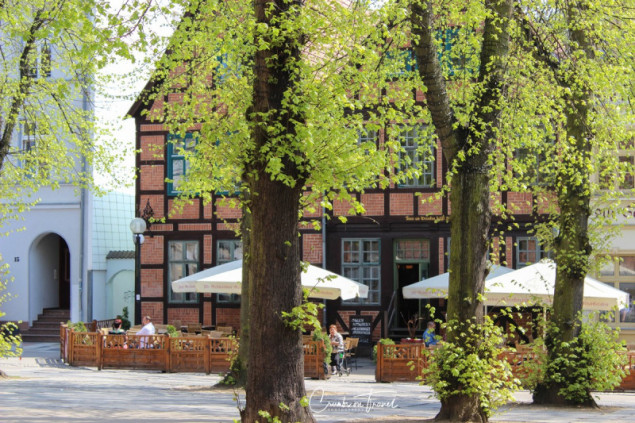 After a while, we moved on walking in the streets. My friend told me all the places she remembered from her time as a young girl and later a young woman working nearby the castle but living in town. There is still a tram but it looks extremely modern and has no nostalgia.

I asked her what typical food or things one can find in this region and area. She didn’t know but definitely it is cheese. The Northern regions are famous for diaries and we found a few real only-cheese-shops. 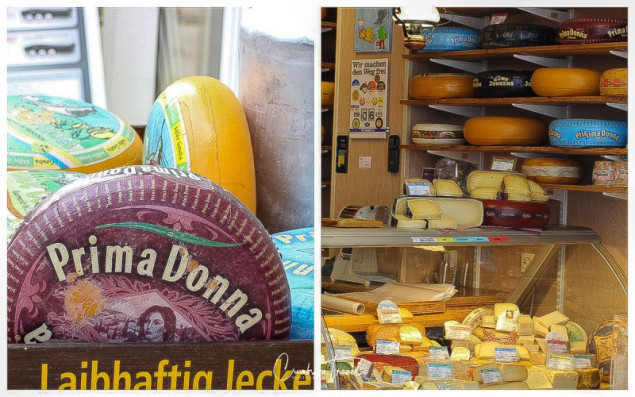 The town center is picturesque and has a lot of little streets and still old style houses. Especially the typical brick and wood architecture can be seen everywhere. I really enjoy that and love it when old trees are near, they have often old entrances and doors of decorated wood.

We walked into churches, seen places that are of interest for my friend but also great to make a couple of good shots. 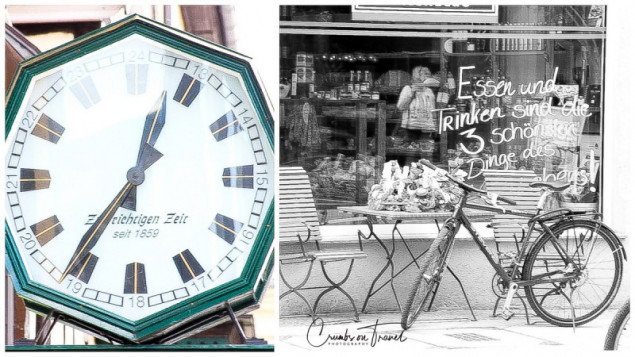 Time was running and at 2 pm we were hungry and started to be exhausted by walking for hours around. We found a nice restaurant called ”Bei Friedrich’s” where we could sit outside on a gallery and have our meal. We opted for a soup (carrot-ginger-soup, very delicious!) and a salad. It was definitely enough and with a whole bottle of water perfect for the rest of the day! 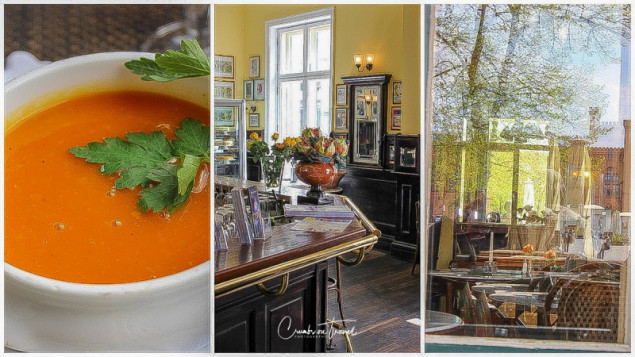 Of course, we walked to the train station as I have a friend in Austria with a special interest for trains and train stations. I was surprised to find such a big station in a town that has less than 100.000 inhabitants. In Lübeck with three times more people there is a much smaller – and I think also less nice one from outside. 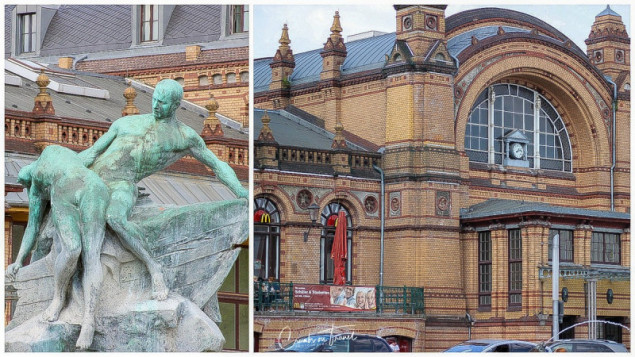 As we walked back to the lake where we wanted to take another coffee and she a piece of cake (as I never find one without sugar and flour and so never can try one) I shot another few detail-photos here and there. I was honestly looking forward to sit at the lake now, enjoy my cappuccino and relax in the peaceful nature of the place.

It was a great day and I am very happy my mother’s friend asked me to come with her. I have known another beautiful city in Germany. 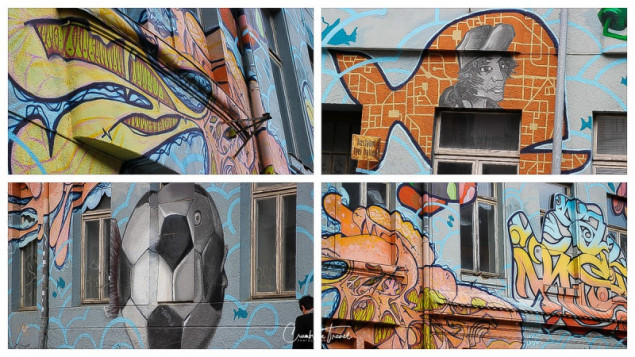 This entry was posted in Germany, Mecklenburg-Vorpommern, ON TRAVEL and tagged Schwerin. Bookmark the permalink.

One Response to A Walk in the Old Town of Schwerin