The Ghost of The Castle of Schwerin

A sunny and perfect day at a castle so beautiful, on a lake island: the Schwerin castle is one of the most picturesque castles I have seen.

We started our approach from the Marstall (royal stables) which is on the mainland near to the today sails club. The royal stables seem to be endless, a long building, two stories high and with a lot of windows. Obviously not long ago renovated. On the back side there are a few blue timber horses maybe to explain what the building was once.

And exactly from here there is the first sight of the castle. Golden onion-domed roofs, towers, a lot of windows and a nice park in between. 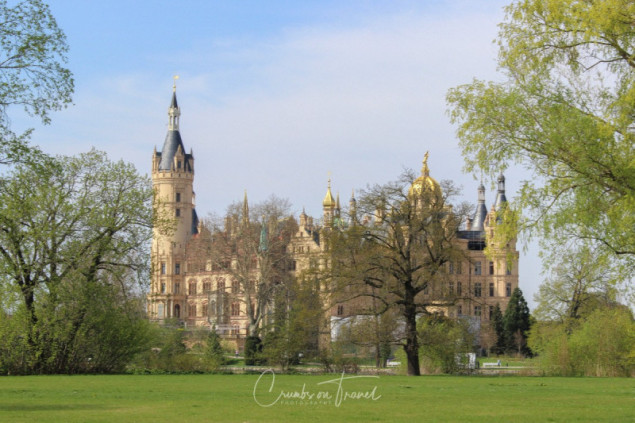 It’s a ten minutes walk the most from the stables to the castle itself. The bridge to the entrance of the impressive building is already interesting and has a lot of great statues like the warrior and the horse. For sure, it represents a Slavic king or high king. From the bridge there is also a great view on the town of Schwerin, typical facades in old Gothic style, the theater and further to the sails club with the many snug sailing boats. 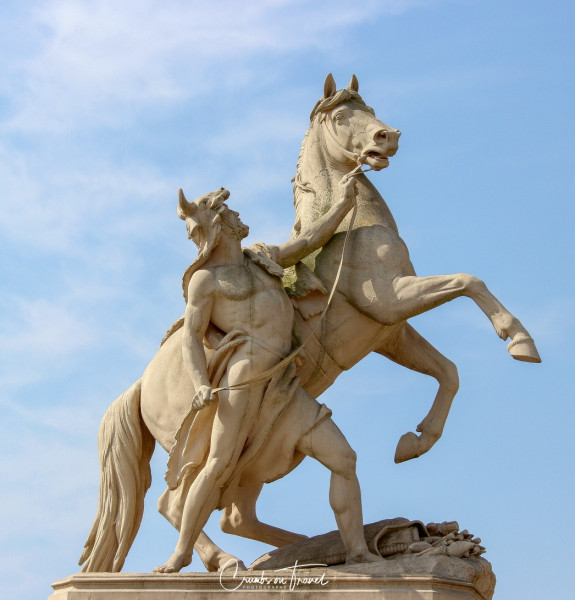 As we approached to the castle we noticed a small group of people, happy to ask them for a guiding tour. Unfortunately it was a Monday and the castle closed to the public. This was a private group for the parliament that has the seat herein.

So we started our walk around to see the park and the castle from outside which is really worth!

In the 10th century there are the first reports about of a kind of castle in this area. The Slavic Obotrites had a fort in this place. Two centuries later the German Henry the Lion came to expand his lands and the Slavic people had to leave. In the castle there is an impressive statue of the Obotrite king Niklot.

The Germans rebuilt the fort on the island and founded the city of Schwerin, which took the Slavic name pronounced in the Germanic way. Curiously Henry the Lion gave the County of Schwerin to one of his vassals and the rest of the country around it to Niklot’s son Pribislav. His line was here until 1918! 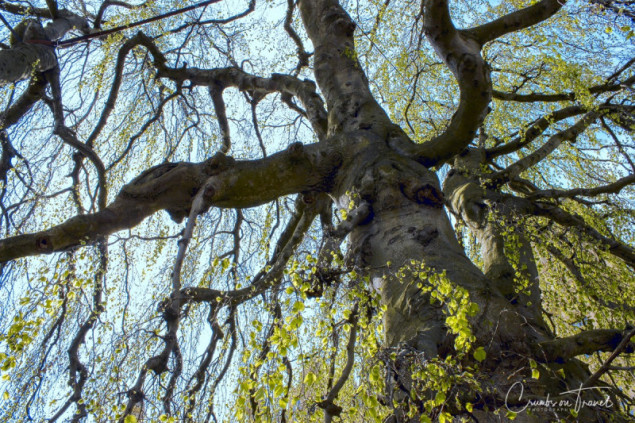 In 1358 the Dukes of Mecklenburg (descendants of Pribislav) bought back also the County Schwerin and restored the original lands of their ancestors. Soon they started to built a more representative house on the island.

So a hundred years later the fortress became a real castle, with terracotta works as common in the Renaissance. The chapel was rebuilt under Duke Johann Albrecht I. In the middle of the 16th century they built three bastions for more defense which are still standing today. 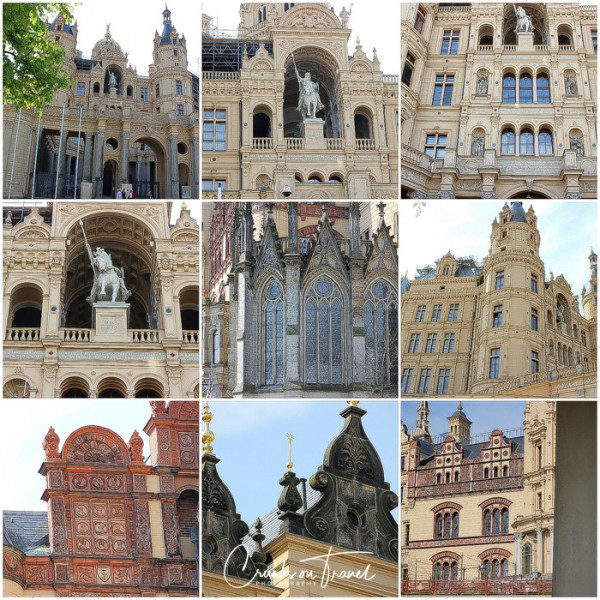 In the midst 18th century the court moved away to Ludwigslust, a nearby castle in the Versailles style.

In 1837 the actual duke moved back to Schwerin and wanted the decadent castle rebuilt. The architect G. A. Demmler was in order to do so. He put elements from two his opponents and a great inspiration by the French Renaissance castles together and changed the aspect of the old castle into the today castle. It was Demmler’s masterwork. The State Chancellery in the Schlossstrasse is also his work. 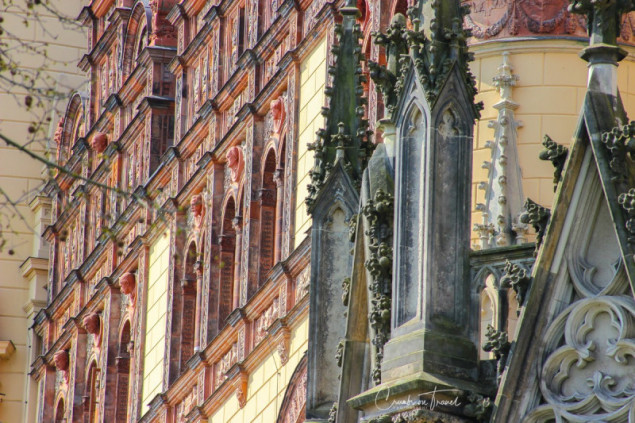 In the last century the Duke had to abdicate. The castle became a museum, a teachers and Kindergarten college and again a museum. Since the late 1990 it’s again a place for government and representation and the seat of the Landtag Mecklenburg-Vorpommern. The renovation works are still to see, parts are closed. 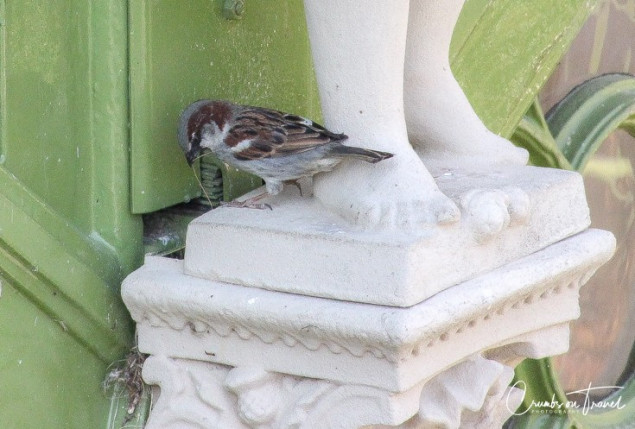 That’s the history of this wonderful place. The sunny day, the warmth, not too many people made it a perfect walk in the castle surroundings. We walked just under big old oak trees, admiring the real incredible worked out facade. A funny art monument let us see through a frame onto the lake like a painting.

Soon after this we arrived at an artificial grotto. Outside a sign that here some bats are living and to be careful. Well, not in a sunny day like this, they are for sure asleep.

Then we arrived at the Orangeries just on the backside of the castle. They looked amazing with a lot of flowers, a fountain, a colonnade and a cafeteria. We didn’t sit down to have a cappuccino but walked further to surround the construction. 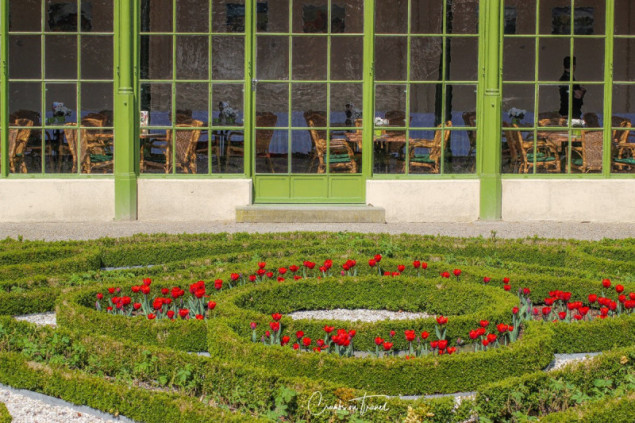 Lawns to sit just on the shore of the lake, a peaceful moment, old trees, some ducks and swans in the water. The imagination prince and duchess, dame and knight walking here, laughing and enjoying the weather and the harmony of everything, is really easy to come. 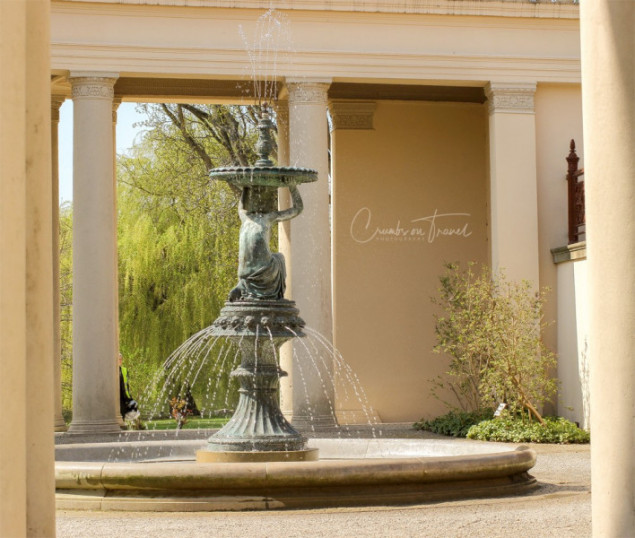 In my heart I was a little disappointed that I forgot the Monday and museums are closed. But My friend told me there is only the museum to see and a little more, the parliament is in most of the rooms residing and so they are closed as well for the public. OK, next time… 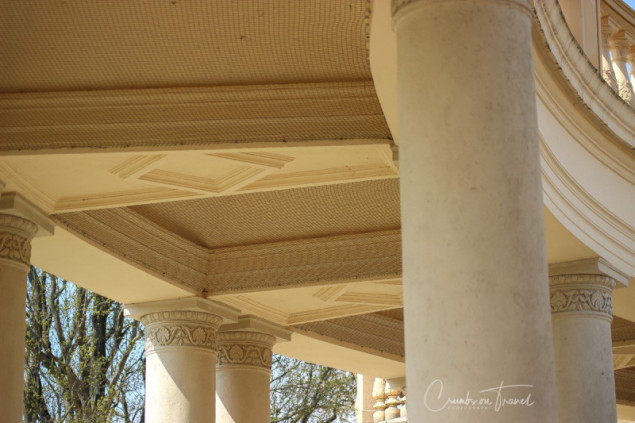 As we walked out of the straight gardens of the castle and just before going over the bridge towards the city center we had a look to the left. There are alleys to walk (now many bikes to see) and the real royal gardens.

After all I was looking for the ghost! His name is Petermännchen. I read he is a friendly household spirit in the castle. He should be only a few feet high, dressed as a cavalier with a waistcoat, riding boots, a feathered hat, a fancy mustache and carrying keys. He is roaming in the vaults and tunnels of the castle it is said. He is maybe the watchman or keeper of the castle and scarring bad minded persons, rewarding good and honest people instead. He appeared in many ways during the centuries.

I haven’t seen him, not even his statue which should give me a better idea of him. But at least I think I should be in the castle overnight to meet him. I would be really curious if he would appear to me…. 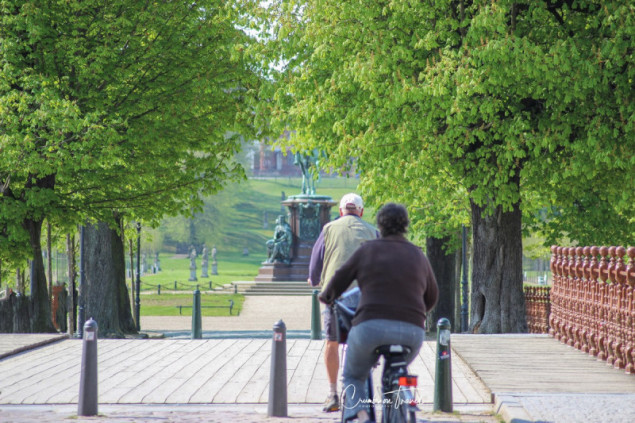 A Lazy Afternoon at the Schweriner See
3 in 1 - Three Churches in Schwerin
A Walk in the Old Town of Schwerin
This entry was posted in Germany, Mecklenburg-Vorpommern, ON TRAVEL and tagged Schwerin. Bookmark the permalink.