A Different Way to Discover Lübeck 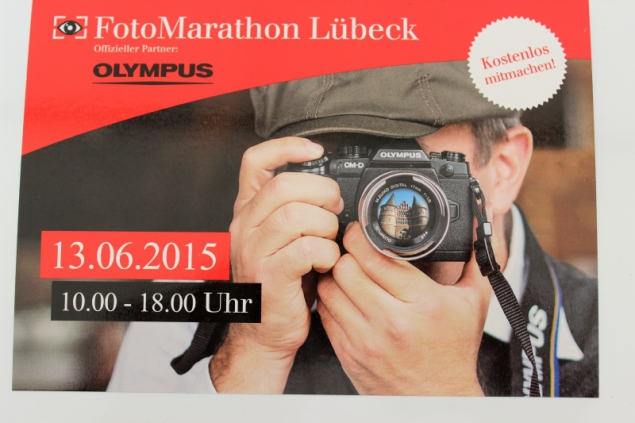 I did it again! This year I had the opportunity to do the theme walk through Lübeck, organized by the City Management of Lübeck. A photo shooting with topics and the possibility to win workshops, accommodations, cameras, bonus and much more.

So a few days ago my friend – she participated last year as well – got our bib number and last Saturday at 10 o’clock we stood in front of the photo competition stand in the market place of Lübeck. We got some presents which contained a memory chip as well.

And here are the topics and my interpretations: 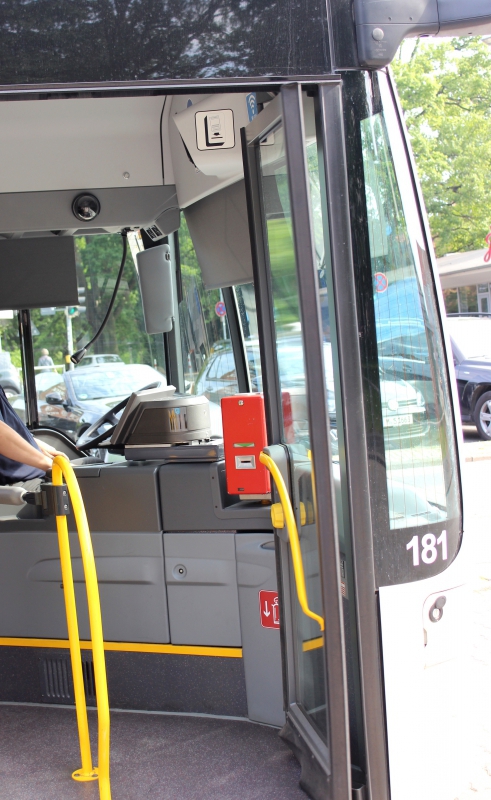 Just in the morning I took the bus to go to Lübeck. And while waiting for the right one I saw a bus with my bib number. Wow… that is more than luck! 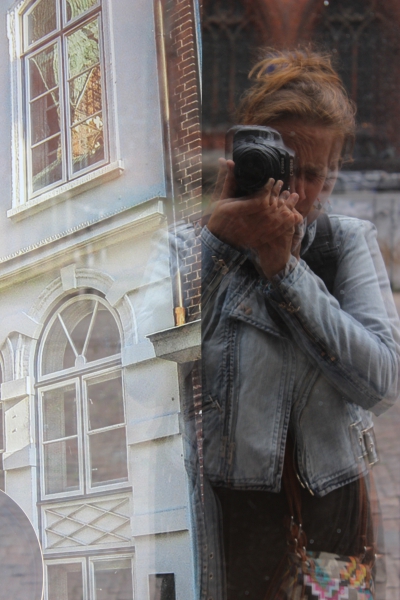 Selfies in the mirror or window or also the shadow are fine for me. But I am not addicted to selfies at all. My friend even had more hesitations than me. We both decided to take the reflection in a window.

This topic is so waste that there is nearly a million possibilities to construe. I saw the sign of a harp – sign for Irish – in the window of an Irish pub near to the harbor. 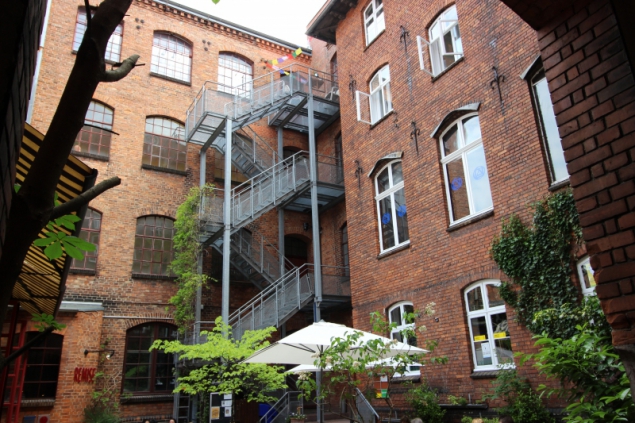 Oh, this was a little more ‘work’. Not because there are only a few inner courtyards (actually there are a lot!) but we had again to walk from the harbor to the other side of the historic district. There we found a few options and I decided to take a photo of the restaurant ‘Remise’

where I have been once during the Night of Museums. 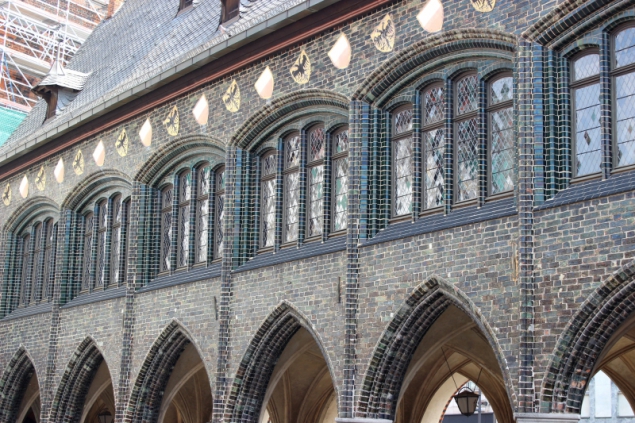 Again a topic with a lot of possibilities. A cog would be typical for the Hanseatic League. But I decided the town hall with all the different emblems. I think my friend took a photo of a lion relief, also very typical for the city.

Sixth topic: From top to bottom

We entered the St. Mary’s church (Marienkirche) because I thought maybe we can go up on a balcony and take a shot. But there was nothing like that, no stairs and nothing from where we could take a view down. But then we saw the bells which fall during WWII. And that is a perfect interpretation for the topic. 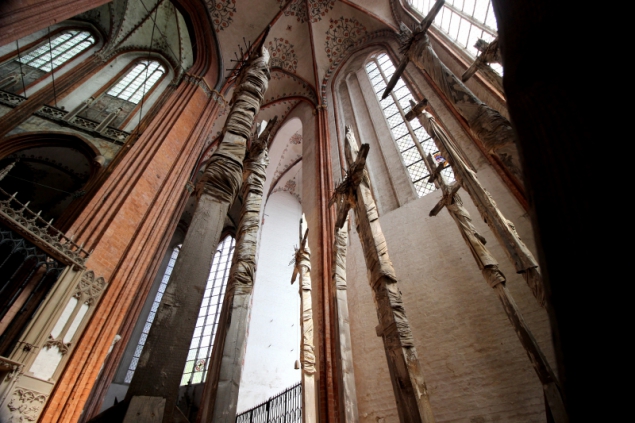 In the same church I took the photo of these crosses. A reminder of the victims during WWII. This is also a topic of thousands of ideas we both had every five seconds. But we could take only one photo… 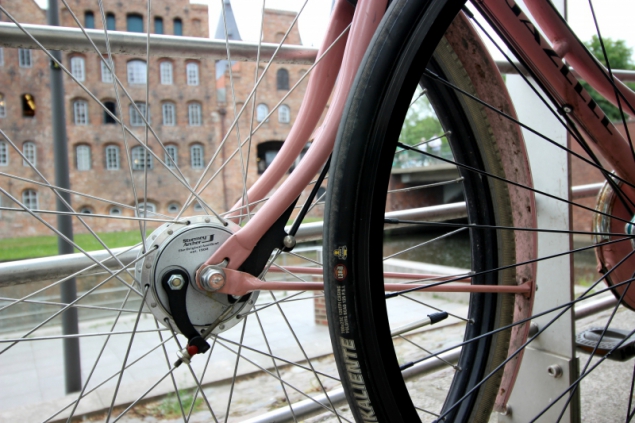 A football? Karstadt Sport with the Holstentor in the background? Oarsmen? I decided to take bikes because Lübeck is full of people going with their bike around. 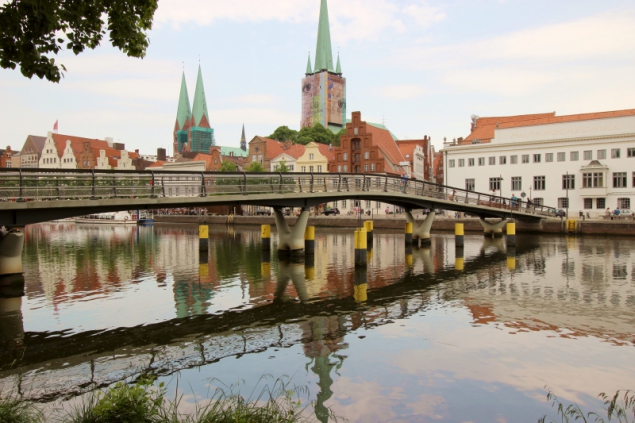 Lübeck has a lot of bridges because the city is built on an island and still full of canals. This shot is a very typical and I think one of the most famous ones. 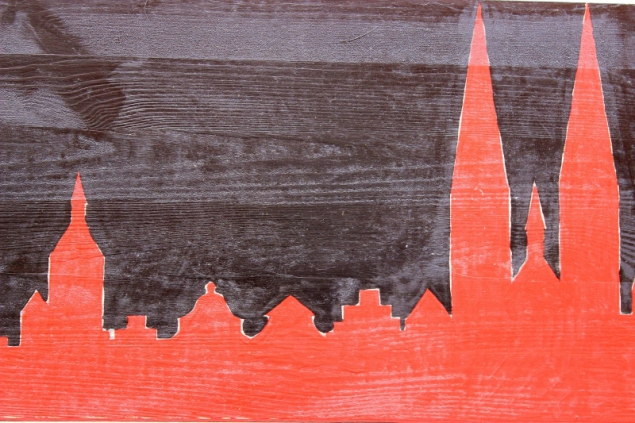 Only something red? Lipsticks were my first thought. Or nail polish. The peppers on my friends dish with fish when we were eating something sitting along the canal… She found a red postcard with a funny saying. I took the skyline of Lübeck I saw near to a shop. 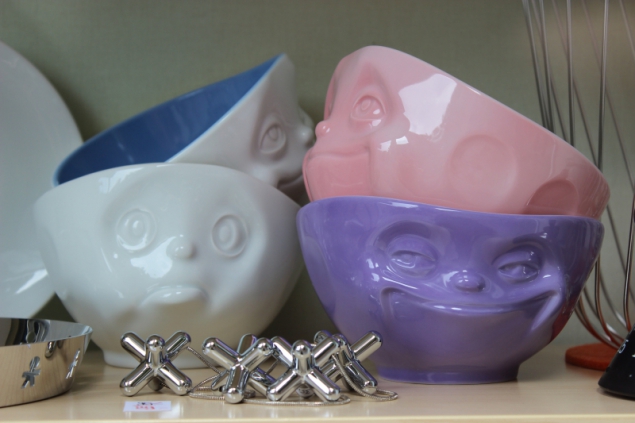 Looking into shops is for women I think one of the most normal things – even going around and doing something very different to shopping. So I saw these mugs in a shop and thought: better than this? My friend took a shadow painting on a house wall with people laughing at a Punch-and-Judy-Show.

Last but not Least the twelfth topic: My favorite subject 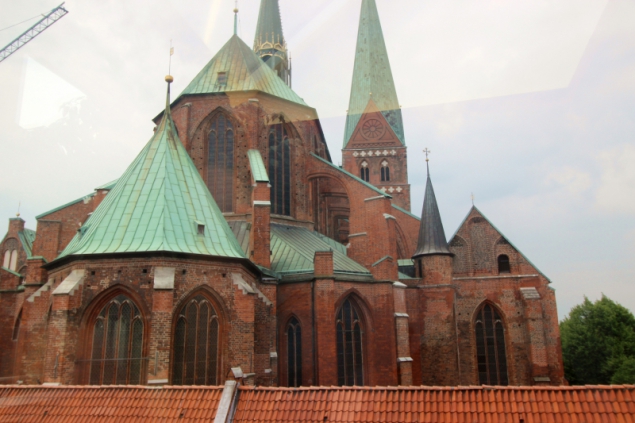 This was a challenge. I have none. Or better: I have many. Everything. Again I had those lipsticks in my mind. But a woman in the mall said I have to ask a permission first. No time and no wish for extra ‘work’. So I opted on the St. Mary’s church which is always a wonderful subject to photograph.

We had a 6 hours walk through the historic center of Lübeck. My friend in the end was so slowly in walking that I thought she will not do it anymore to the bus. And I was tired as well – nonetheless we had lunch and twice a coffee break.
But we enjoyed both the day. The topics were interesting again. Next time (maybe next year, as house-sitting will be later here than this year) I will take a mascot. I already saw one I would like…

Photo Marathon 2020 in the Rain
A Theme Walk in Lübeck
This entry was posted in Europe, Germany, ON TRAVEL, Schleswig-Holstein and tagged theme walk luebeck. Bookmark the permalink.