700 Meters under the Mountain – the Caves of Frasassi 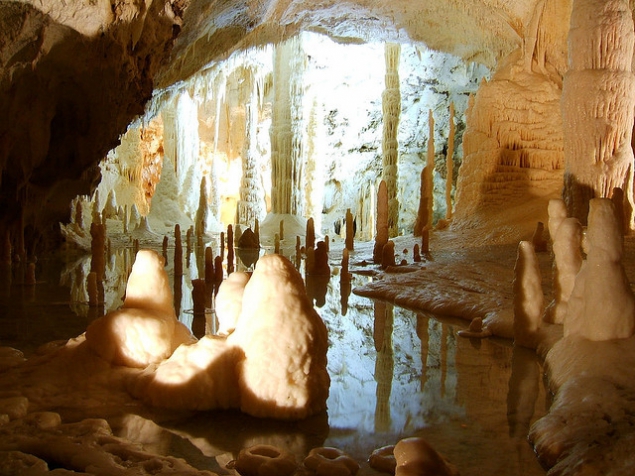 On my list – when again in the Marche in Italy – I had the Monte Sibillini National Park and the caves of Frasassi. It is one of the greatest karst caves and by the photos I have seen before they should be really amazing.

So when I had the opportunity I went together with a friend who was climbing up the highest peak – the Monte Vettore – in the national park just days before. Under precarious conditions from my point of view: snow hip high, super windy, freezing cold. But that was what he wanted to experience. A real adventurer! 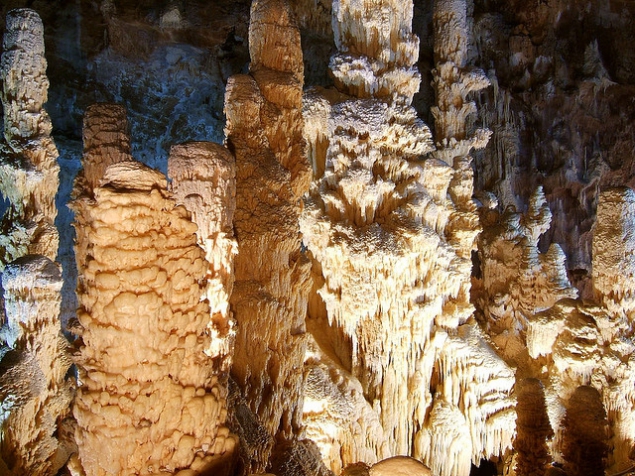 The day we went to the Frasassi caves sun was shining and in just 1.5 hours from Fano we arrived at the huge parking place and the ticket office. We booked our tour and waiting for the shuttle we had a short walk around at the super commercial stands, selling the most horrible gadgets.

The tour began at 4 pm and would take approximate 75 minutes.

Our group of maybe a dozen visitors had a few English and French speaking people so they had a head phone for their language. The guide was a young lady, doing her guiding job perfectly. Telling us a lot of the caves, the story of discovery, the history of the cave itself.

The caves were discovered by a group of young speleologists of Ancona in 1971 in the area of Genga. The main cave was so deep from the point where it was discovered that is took the name of Abyssal Cave. Inside it has an humidity of nearly 100 % and a constant temperature of 14°C. The main ‘room’ is nearly 200 m high and 120 m per 180 m large. The dome of Milan could enter here easily.

We walked around 1.5 kilometer 700 meters under the surface admiring stalagmites and stalactites 25 meters high. The artificial lights are giving all a great vision. Maybe 1.4 million years ago sulphuric water gouged niches and caves into the limestone. The whole cave has a music of dripping, beautiful little lakes with crystal clear water, profound 25 meters.

It is important, our guide told us, not to touch the stalagmites and stalactites because our skin lets always a light grease on what we touch and there the dripping water or better the calcium carbonate can’t take place anymore, the formation would be interrupted.

Imagination is asked here because many people see faces, animals and things in the formations.

Unfortunately I could not take photos in the cave. It is not aloud because of the rights of the Genga Town Council. So I DON’T take credit this time of the photos – I am just aloud to take them from their own website (see below).

I highly recommend these caves! They are amazing and it will not even one second lost here. You will have a total breathtaking afternoon, unforgettable. 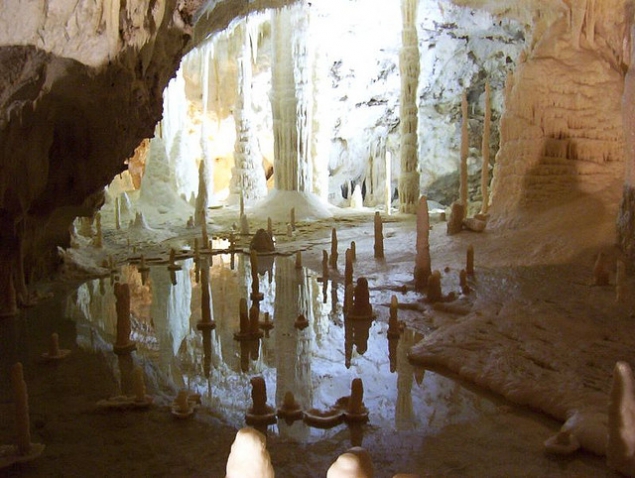 For further information:
Caves of Frasassi
Entrance fee: 15,50 €
Timetable on their web page

Video of the Cave Frasassi

... and Suddenly there Was a Church
A Castle on Red Stone – Castle Pietrarubbia
A Closed Visit to Mondolfo
This entry was posted in Europe, Italy, Marche, ON TRAVEL and tagged Marche. Bookmark the permalink.