414 steps on the Giotto’s Tower of Florence 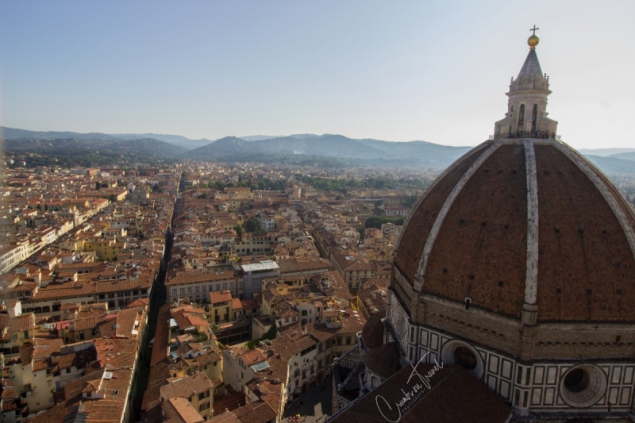 It’s in the middle of summer, more than 35°C/95°F, and we wanted to climb up a 85 m/280 ft high bell tower in Florence. The bell tower is the Campanile di Giotto (Giotto’s Tower) and is side by side with the basilica of Florence.

Just to look at the tower makes you feel dizzy: it is so richly decorated with different marbles and designs, so beautiful that you easily ask yourself if that is something people really could create. Sometimes I am overwhelmed by so much magnificence.

We bought the ticket the day before to enter the battistero (baptistery) and it is valid for two days. So we decided to come back early in the morning and climb up at opening time at 8 o’clock. So we did. I was very glad about it, because the tower’s staircase is narrow and gets easily warm with little air to breathe. 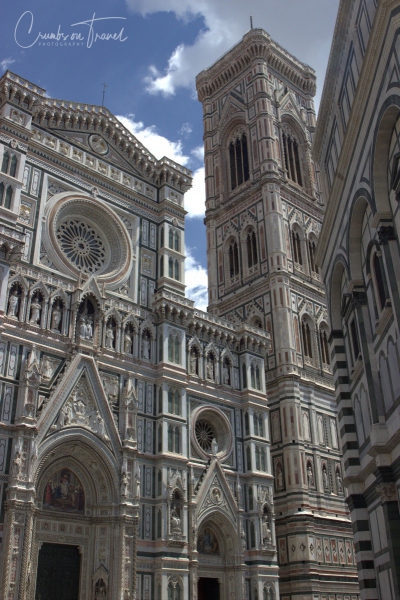 The tower is a free-standing campanile and is part of the cathedral and the baptistery in Piazza Duomo in Florence. It is not attached to the basilica Santa Maria del Fiore like most bell towers to the church are. It is built in Florentine Gothic architecture style and was designed by Giotto (painter and architect, 1267 – 1337). The tower has a square shape but with its polygonal buttresses it looks like a square with round edges. The tower has 5 sections.

The basilica was already in construction since 1294 before the campanile was designed in 1334 by Giotto, the new architect of the basilica complex. He applied the chiaroscuro (light and dark contrast) and to make it look Gothic he used geometric patterns in colored marble. The design was very much in relation to the basilica design of Arnolfo di Cambio, his predecessor.

Giotto died only three years later and finished just the lower part of the tower. The white, Carrara marble, the red Siena marble and the green Prato marble he put in geometrical shapes. 7 hexagonal panels on each side, decorated with bas-reliefs. Be sure to have a look at them, they are amazing! BTW: 7 is a special number not only in the bible, where it symbolizes the human perfectibility. Well, we won’t discuss that…

His successor was Andrea Pisano (sculptor and architect, 1290 – 1348) who built two more levels and decorated with lozenge (rhombus-shaped) panels. His work stopped because of his death and the Black Death in 1348.

Francesco Talenti (sculptor and architect 1300 – 1369) completed the bell tower in 1359 building the top three levels. The bell tower in the end was 38 m/120 ft shorter than it was originally designed by Giotto. The spire is missing, instead there is a projecting terrace.

Architecture fact: each level is a little bit larger than the one before, this way seen from below it looks like every level has the same seize (perspective effect) 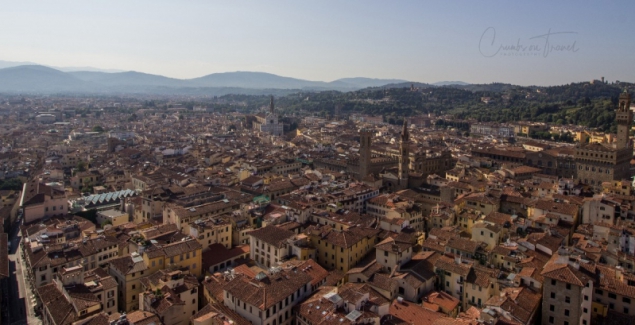 There are 7 bells on the top. Don’t be afraid that you will be standing on the top, and they will start to ring: the tower will be closed by then. In the top there is a round walk and an inner room, where also a security officer is sitting. In some parts when you go up, the staircase is pretty narrow and could be a little ‘frightening’, especially when people are coming up and going down.

The view from the tower is breathtaking and if possible you should not miss going up if you can. Try in the early morning, going down two hours later I felt already the difference in warmth and air quality. 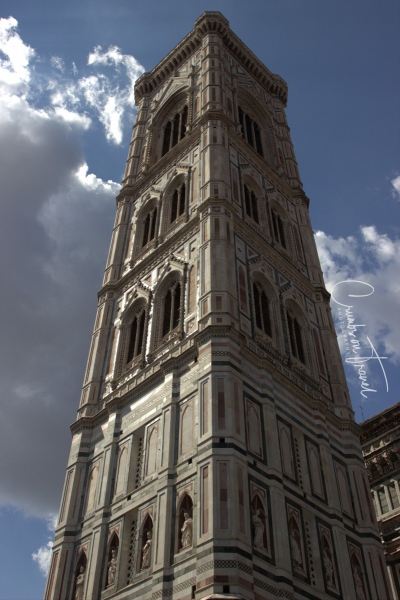 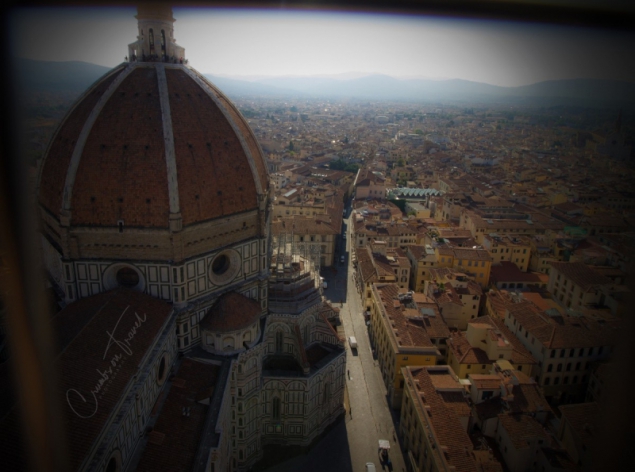