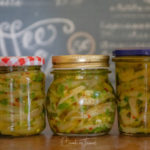 To store the 'melanzane sott'olio' you just leave them in your pantry. Don't put them in the fridge! After you opened a jar, finish it within a couple of days.

I stored them the whole winter and longer this way without a problem.

Share this Recipe
Powered byWP Ultimate Recipe
This entry was posted in Uncategorized. Bookmark the permalink.