The World Storytelling Day around the 20th of March, the equinox, is a celebration for the oral storytelling. There are events and celebrations around the world. A way to listen and tell stories, fiction, true, heard or invented in the moment.

Once, before there were books, stories, news, events and facts were told. Do you know about bards? They have gone from one place to another telling and singing events, political conflicts or just about other places they have seen. A kind of newspaper of the past. Storytelling is an art, not everyone knows how to tell a story. There is so much into it: the voice, the personality of the storyteller, the way to tell a story, to create suspense, the art to transmit emotions and feelings through a story.

Every year there is a theme for the celebration of the World Storytelling Day, this year is: ‘new beginnings’. Appropriate with the hope of an after-Corona-life.

As I can’t sit in front of anyone and tell stories, here is my contribution for the day, a true story. 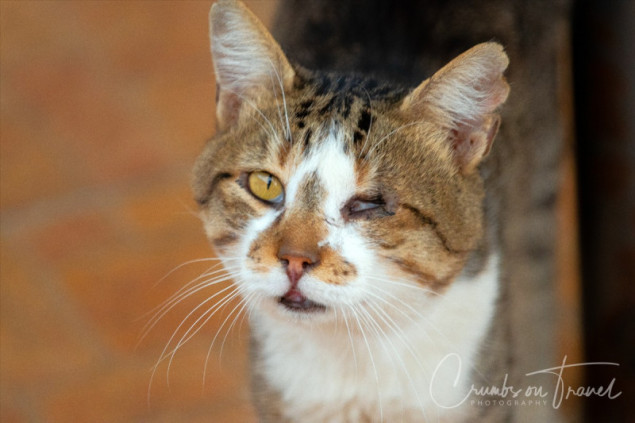 He barely stood up. He was so thin that the wind was almost blowing through his ribs, if it weren’t for a layer of skin and thin, shaggy fur over it. His only eye was watering, green slime ran down his nose, he was breathing heavily, whistling. He didn’t know when he’d last had something to eat, everything hurt, he barely had any strength left. If it weren’t for the occasional mouse his girlfriend brought him, he would have crossed the Rainbow Bridge a long time ago. But she kept him alive.

The garden gate opened and a car drove into the garden. A woman got out of the car. She greeted the man, living here, talked to him, began to get things out of the car.
As she did so, she looked down at the one-eyed cat, bent down and stroked his back. She quickly pulled her hand away. Scared, disgusted? The conversation was briefly about him, about Gregor.

He followed her, but remained seated on the stairs. Going up cost him incredible strength. He waited a long while, the woman walked past him, up and down, usually packed with lots of things. And then suddenly came with what he longed for the most: a pot of food! It was like a miracle after such a long time, finally something between his teeth again. The smacking sound that reached his brain, the taste of freshness, the smell, it couldn’t be described. He was even more exhausted after the delicious meal than before. Later, much later, the bowl was filled again and he was able to fill his stomach another time.

That night he got up and climbed the stairs. He curled up on the mat in front of the door and waited for the morning.

The day began with sunshine and the chirping of birds. Soon after sunrise Gregor heard noises behind the door. The woman was awake and would definitely come out soon and maybe he would get something to eat again. And actually later the door opened and something delicious was put down for him. There was also a pot of fresh, clean water.

Over the next few days he was given new food again and again, he took everything he could get, nearly inhaling the food. Who knows how long it would last. Like everyone else, she would certainly leave after a short time and he would be without food again.

But things turned out differently. The woman stayed, and there was something to eat several times a day, every day. She built him his own little hut, with layers of fresh hay and soft blankets inside, dry and warm for the coming winter. Every day there was fresh food, sometimes fish, sometimes chicken, enriched with vitamins. He was washed several times and freed from ticks and lice. His fur grew thick and shiny, his ribs became invisible, he had strength again to run up and down the stairs quickly. Jumping was no longer a problem. His snot nose never went away completely, and his croaking voice never got better either. But he was happy, satisfied and above all he finally felt secure.

Unfortunately, he was never allowed into the apartment because there was another cat there, female. She didn’t want him, said it clearly. But no matter: his before girlfriend was still there, slept with him at night in his hut and cuddled with him.

On that day in late summer it was a new beginning in the life of Gregor, the pirate. Now he curled up contentedly in the large bowl in the sun, dreaming of heroic deeds that he maybe accomplished once, satisfied of a cared life. 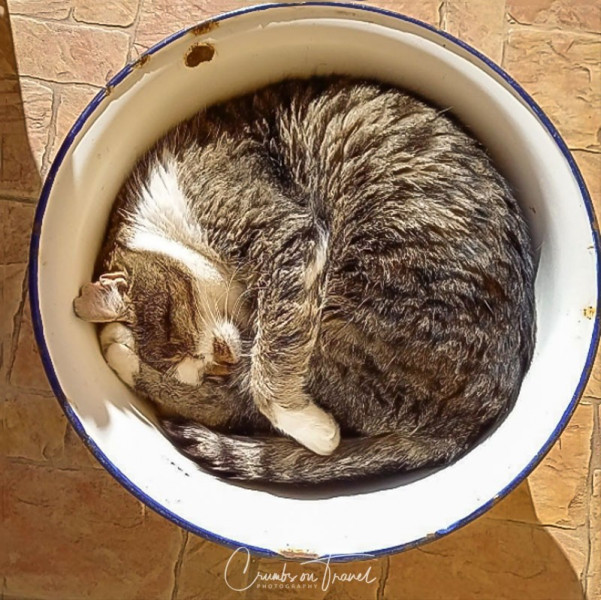 This entry was posted in events, The Storyteller and tagged events. Bookmark the permalink.