Where the Honey Has its Spring – Mellifont Abbey in County Meath 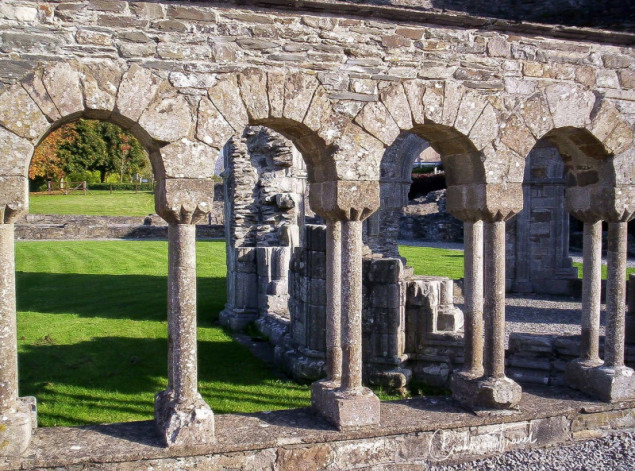 Many things I read about the Mellifont Abbey and I was curious to see it., believing it is a huge place. So one day I took my car and off to Slane (from Dublin take the N3, from Navan take the R154) where nearby the abbey is situated. From Dublin cross the traffic lights straight, from Navan take the left at the traffic lights. Finally on the N2 after maybe two kilometers I saw an indication – just in the moment I passed it. I had to turn back and take then the left into a small narrow road leading… in the middle of nowhere. I thought I am lost because there were no other signs to tell me where I am. No houses and a narrow road. After about 5 kilometers I arrived at a T-junction and there I saw a road-sign to the right. I turned and stood immediately in front of the Mellifont Abbey. So at least it was easy to find it. 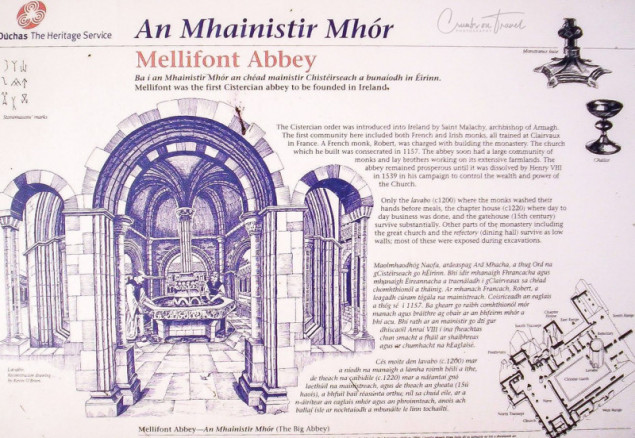 On the small parking place there was no car, the visitor center closed and no human being. In the winter time there are only few people around here. For me it was the best because I had my dog with me and we could go around freely without disturbing and being disturbed.

Some history about the abbey: 1139 archbishop Malachy of Armagh started his pilgrim to Rome. On his way he stayed a few nights at Clairvaux in Burgundy/France. The monks here lived a very severe life and called themselves Cistercians. The Irish archbishop was impressed deeply by their way of living life. On his way to Rome he decided to ask the Pope to be let out of church to be a monk of the Cistercian order. But the Pope didn’t let him go and he had to return to Ireland to continue his mission in the name of the Catholic church. But on his way back he stayed another two months at the abbey to study properly the doctrines of the monks and left some of his own monks for further studies. 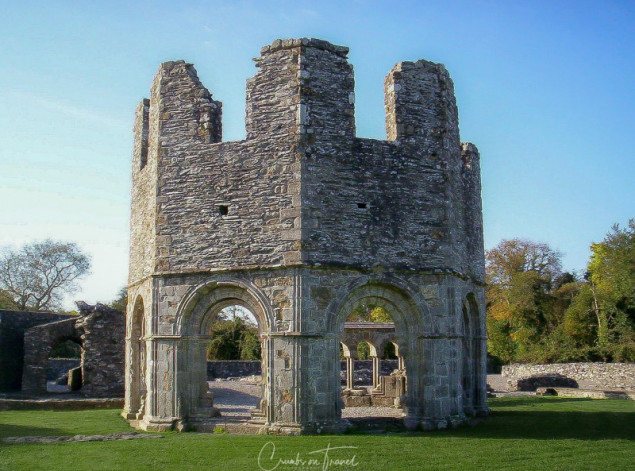 Back in Ireland in 1142 he decided to built an abbey for the Cistercians. Donough O’Caroll, Prince of Oriel, donated him as an supporter of the reformers within the church a lot of land at the Mattock river. Archbishop Malachy started to build the very first Cistercian abbey in Ireland. He named it ‘Fons Mellis’, ‘the honey spring’. 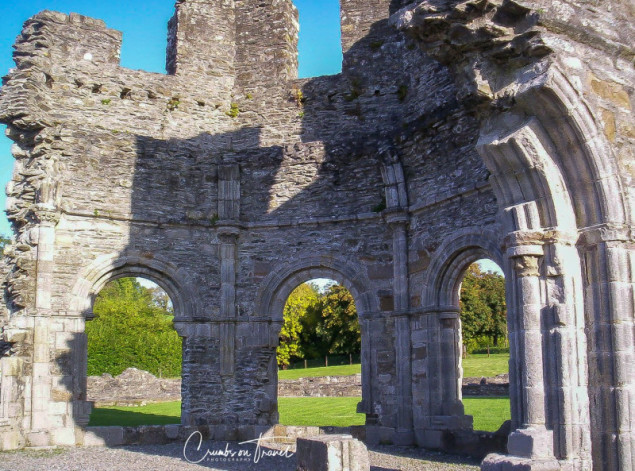 A French monk architect named Robert designed the abbey. He completely built it in Northern-Gothic and so in a completely new style for Ireland. 1157, 15 years after starting building the abbey it was inaugurated together with many local kings and a large amount of donations. During the next years there were built many other abbeys in the same style like e. g. Bective Abbey.

But the French monks staying here to help rise the new order had problems with the Irish monks and there were many discussions. These were brought to the mother abbey at Clairvaux and a delegation was send. But the delegation was closed off the Mellifont Abbey and in the other abbeys. This was known later as the ‘conspiracy of Mellifont’ and was long unsolved. Only Stephen of Lexington, abbot of Stanley, has been a radical reformer and replaced the abbots involved in the conspiracy. In the middle of 15th century Mellifont was the richest Cistercian abbey in Ireland. 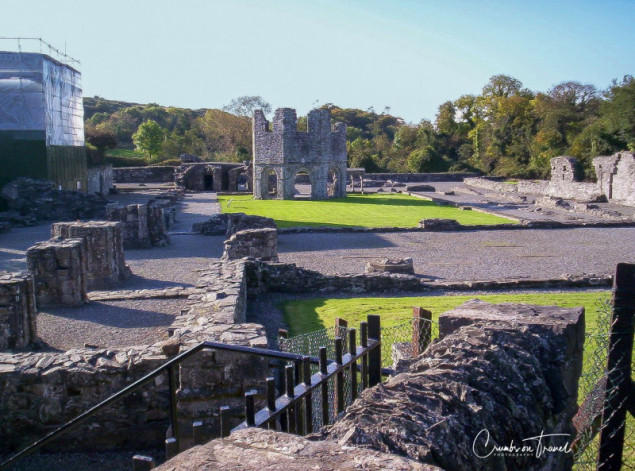 Until 1443 there lived more than 100 monks and over 300 lay-brothers. It has been the biggest abbey in whole Ireland till it was closed 1539. 1566 Edward Moore, Sire of Drogheda, built a fortified house within the walls of the abbey although some monks were still within the walls in their own livings.

William III of Orange-Nassau took his quarters here at 1699 with his 36.000 soldiers when going to the battle against James II.

1727 it was given to Balfour of Townly Hall and let it go to ruin. 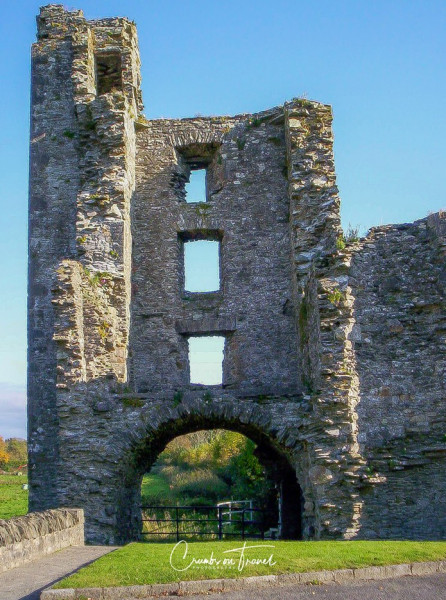 With this story in my mind I entered the big entrance gate. It is situated before the parking place and I think I parked my car in the court of the abbey ground. The entrance gate is a high 3-story tower and it’s easy to imagine a big gate that opens and closes.

Just on the other side I could step down to the abbey monument. It must have been huge once but now there are nearly no walls, all open and it seemed a little bit .. miserable? But there were still some marvelous pillars with great work. The once lavabo is one of the finest works I have seen here. It was for the monks to wash their hands after working in the fields and before going into the refectory for dinner. 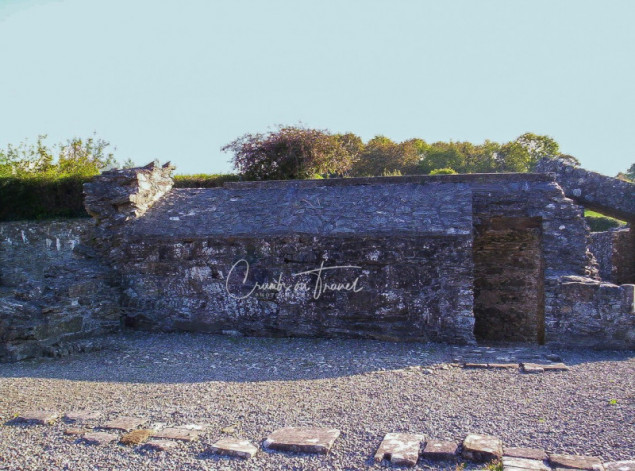 The church must have been really huge by the ground walls one can see. Unfortunately one can see only where the walls once have been. Beautiful is the peristyle with double-pillars. Very impressive are the huge sockets of these main pillars. They show how big and high once the pillars have been. There it was for sure easy to contemplate and find god in the prayers. 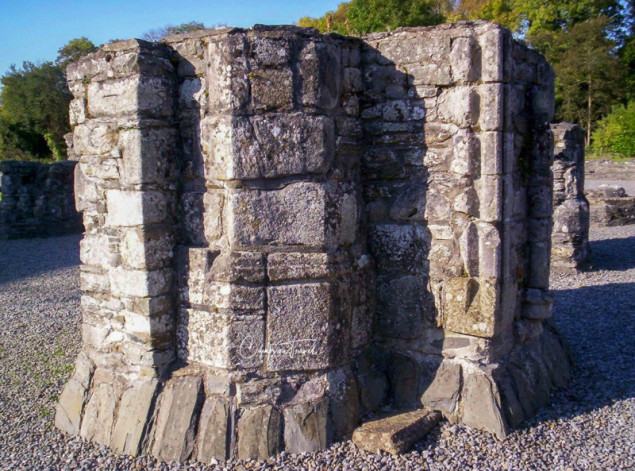 After going around I had a look but behind the visitor center where is a small way up to another chapel. Very small but interesting. Must have been one outside the abbey-ground maybe or a private one. It has a nice arched window above the entrance and also a small bell tower on its top.

There is just beside the abbey the small river Mattock and on the lawn there are some seats and a stone table for picnic. 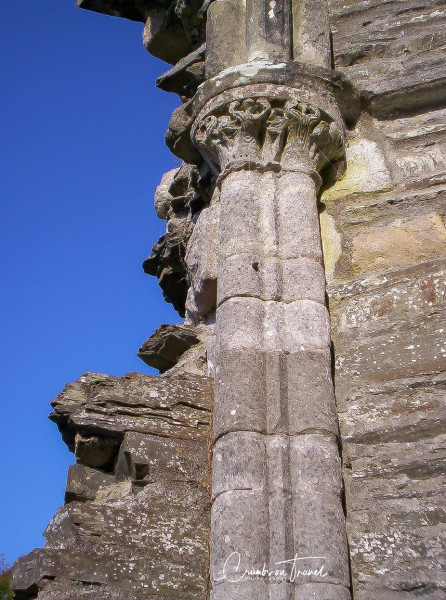 Mellifont is a really nice place, especially if one goes during the winter time. In the season – from April to October – there is an entrance fee ( adults 3 €, groups and OAP 2 €, children/students 1 €, family ticket 8 €) and of course the visitor center is open. It’s possible to get a brochure about the grounds and history for 50 €cents.

If someone is looking for this abbey it’s important not to confuse the new Mellifont abbey (still working). The new one is situated in Collon in County Louth. I have been to the Old Mellifont Abbey ground. 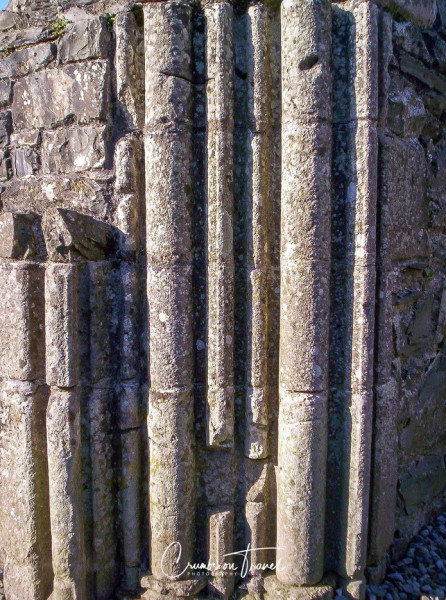 For further information:
Here are some Google photos
The website of Mellifont Abbey
Mellifont on Wiki
and on Heritage Ireland
More about County Meath in Ireland

The Rescue of a Bridge - Butler's Bridge at Bellinter House
Be sociable, tell others!

This entry was posted in County Meath, Ireland, ON TRAVEL and tagged County Meath. Bookmark the permalink.