Again I took my two elder lady-friends out to have a look at the seaside of Mecklenburg-Vorpommern. We headed early in the morning towards Rostock where our first goal is situated: Warnemünde.
Warnemünde is to Rostock like Travemünde to Lübeck: the seaside resort to a bigger, economic seaport. It’s the northernmost district of the biggest city of Mecklenburg-Vorpommern. It’s lying at the mouth of river Warnow and was from 1200 a small fishing village. Only in the 19th century it developed into the today seaside resort. 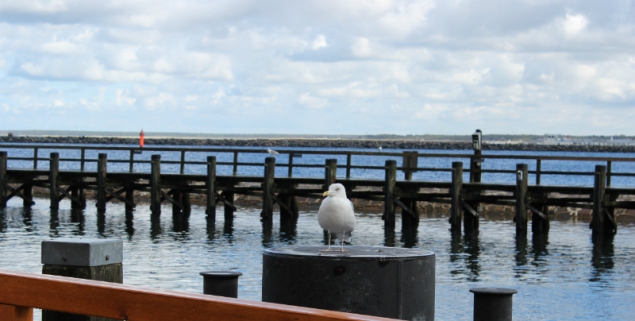 We arrived in fully rain and started out day with a cappuccino in a cafeteria at the market place around the lighthouse. Bird flying into the cafeteria to catch some crumbs of the great cakes and biscuits.
The lighthouse gives the possibility to get up and have a view around to Rostock, in inner land and of course the whole seaside. With good weather it would be a great thing to do – I didn’t in the rain.
But between two showers we had a look at the small handcraft market with a lot of ceramics typical for this part of Germany. 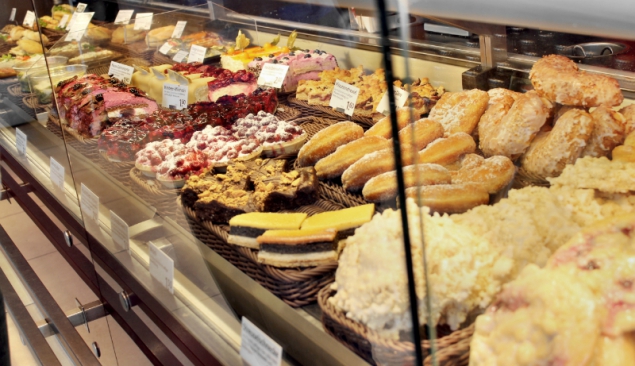 Later we hopped from one shop into the other and when finally the rain stopped for a while we could have a look in the streets. Small, with colored houses and cobbled streets. 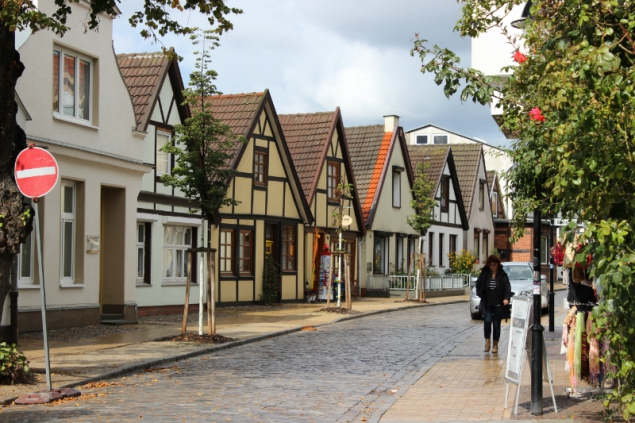 It’s fall and pumpkin time – we saw this really funny one. I saw a swan, my friends other bizarre things. But we all stopped to talk about it. 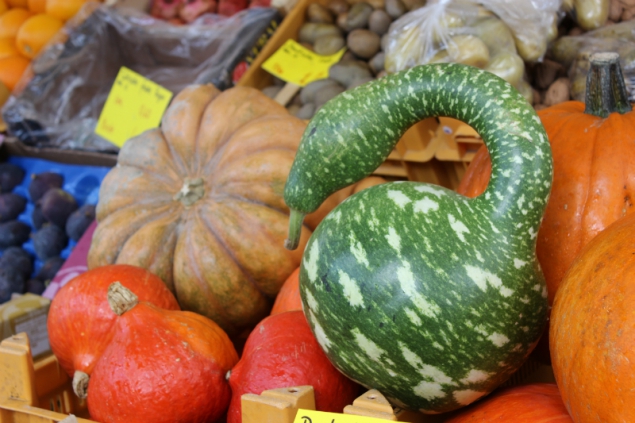 We left Warnemünde after two hours or so and got to Bad Doberan.
This little place is more inside and no sea and beaches. Here one of my friends wanted to introduce me to Molly and show me a really impressive dome.
First I saw the Klosterküche (monastery kitchen) we had a look inside as well. It’s definitely a cozy place to stay! Small rooms, a small library (German books only I think), other rooms where to eat and everywhere a little bit a shop as well. The menu is promising..

On the other side of the street there is a huge park and the dome of Bad Doberan. Actually it’s a minster from a former Cistercian monastery and still in use.
Doberan was the first monastery in Mecklenburg in the early 12th century after the conversion of Pribislav, a Wendish prince. From the end of the same century it started to become a political, spiritual and social center in the region.
The minster or once abbey church is one of the most important brick Gothic buildings in the region and was the burial places of princes of Mecklenburg possessing a lot of estates. 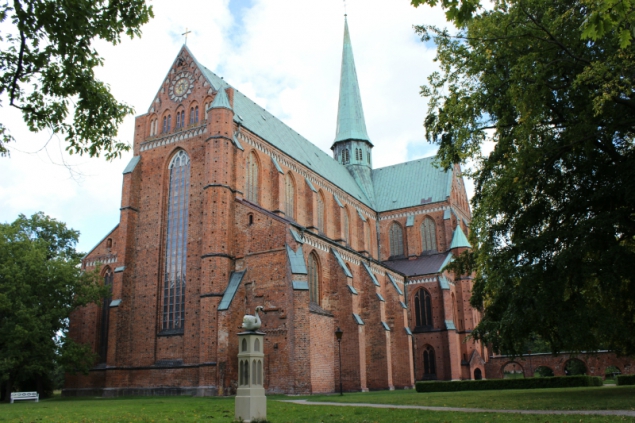 Today it has also the most well preserved Cistercian furnishings in Europe. Inside it has an outstanding high Gothic architecture in white, red and green. It is so high that it nearly hurts to look up. It has a few separate parts and beautiful, colored windows.
Amazing are the various medieval altars and the high, massive green cross just in the middle of the church.
There are also some tombs of princes and abbots as well.

I have not seen the wooden arched ceiling but I visited one years ago in Lübeck’s St. Mary’s church. 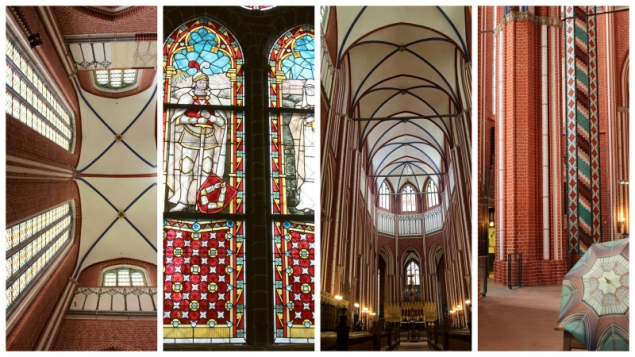 If you want to see the church from inside it costs about 2 € each person. You have all the time you need to go around and have a lot of photos.

After the impressive minster we had a short walk in the park and then to the town center where my friend wanted me to know Molly.
Sun was shining finally and the third friend didn’t want to walk anymore so we decided to have a second cappuccino and them a cake. I love to see the cakes but since I changed my diet completely I would not like anymore to eat something like that. But for a photograph the high cakes are always lovely, aren’t they? 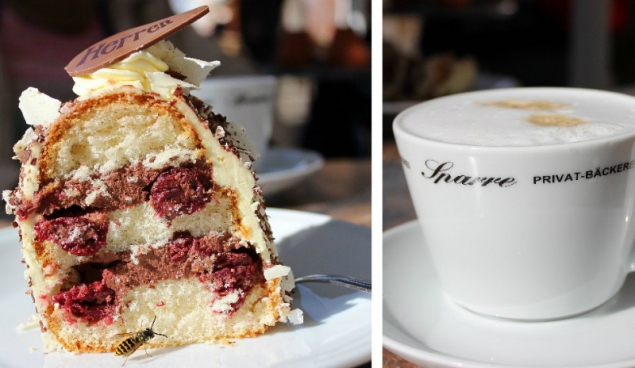 Molli is a small – well, a long old train going from Bad Doberan to Kühlungsborn passing the nice country-side. It was built in 1886, nearly 130 years ago. The locomotive seen today is from the late 1932. The ‘Salonwagen’ is one of the newest parts: it was added only in 1986 and is for passengers who like a little more luxury. Every hour there is the train from as early as half six in the morning to late half ten in the evening and with a lot of stops. Costs starts at 4,50 € a ticket. The way goes from various points in Bad Doberan to Heiligendamm, along the cliff coast to Kühlungsborn east and west. It looks great when rolling along the street where normally one expects modern cars. 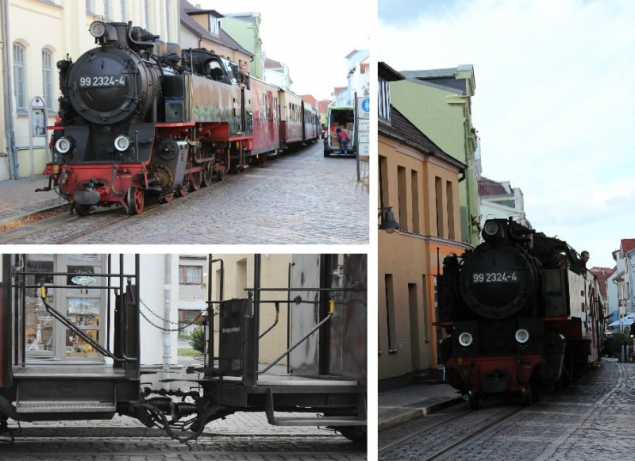 We left Bad Doberan after we saw Molli and went straight throw Heiligendamm where a very famous Hotel is situated.
The Grand Hotel was once the Hotel reserved only for the former DDR-leader Honecker and completely closed to outsiders. Later after the reunion of the two German parts it remained a luxury hotel but today is partially accessible.
The old buildings where constructed already between 1793 and 1870 and consists in six different buildings. In 2007 it hosted the G8 summit I remember well everyone talking about the enclosure around it.
We just passed as it was lightly raining and we were not in the mood to get out to see something anyway closed to us just walking around. 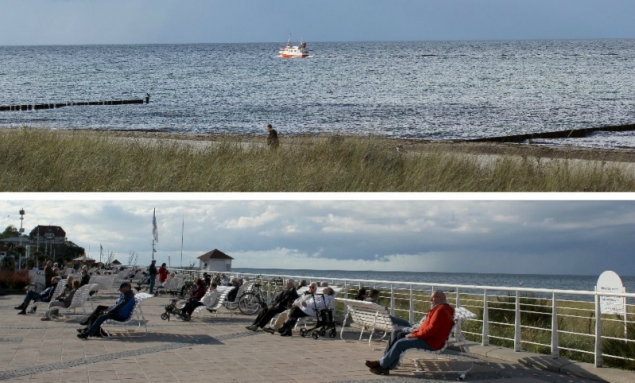 We had a great day. But I think it was the last time I would like to see places along the Baltic Sea coast. I enjoyed it a lot and recommend to everyone coming to Germany not to miss this area. It’s very typical and very suggestive. You will see Germany completely in a new light!

For further information:
About Warnemünde (in German)
About Bad Doberan
About the Molli-Bahn
About Kühlungsborn
About Mecklenburg-Vorpommern

Strawberry Fields.... and Even More Strawberries
Driving around in Mecklenburg-Vorpommern
The King of Rock 'n Roll on Ice
Be sociable, tell others!