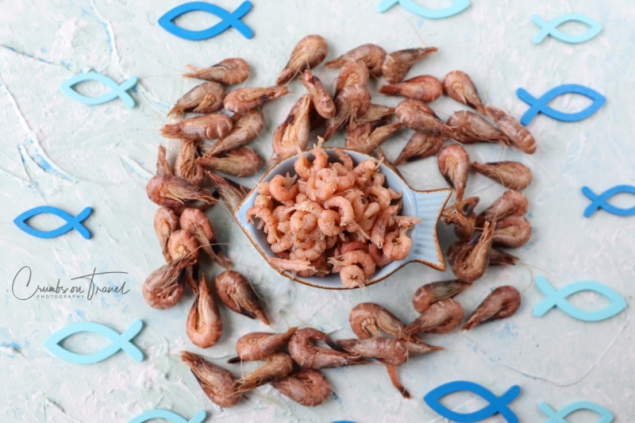 Very typical food in North Germany, but also in the Netherlands, Denmark, England, Belgium and France, are shrimp. And I don’t mean the shrimp that many know in most of the other countries. I am talking about a little tiny one, the Crangon Crangon. The Caridean shrimp is found in the North Sea, but also in the Baltic Sea, Irish sea and even in the Mediterranean Sea and Black Sea. They have common names like brown, Grey or common shrimp. I guess in Canada and France they are more know with the name Crevette.

They are not longer than 5 cm and less (1-2 inch) and are food for many sea animals and birds. They have long antennae and a little bi-forked tail. During daytime, they hide in the sand. I remember when I was a child my mother very often bought these little delicatessen and was sitting in the evening listening to the evening news and peeling them. Sometimes it happened I was sitting near to her, and so she wondered why the shrimp never got more. I was eating them when she was concentrating on the news. I always loved them.

In Germany, especially the region of Schleswig-Holstein, Büsum and Friedrichskoog are the main places for shrimp drought. Until the 18th century the drought was done by horses. They carried the nets along the sandy beaches. In Belgium, it is still done in some touristic places. The shrimp are cooked right away on the beach and then sold unpeeled. Nowadays they are caught with bottom trawling from fisher boats (in German called ‘Krabbenkutter’ = shrimp cutter).

After caught the fishermen clean the nets from other fish which go back into the sea alive. The shrimp instead are cooked immediately on the boat. They turn from brown when alive to pink when cooked. Many fisher sell their catch when they come back into the port. The rest goes to machines to assort by size and then to countries like Poland, Russia or Morocco for peeling. The law says it is not allowed anymore to do this in homework like it was done until a few decades ago. As this is a blog and I say my opinion: I don’t understand the logic why hands of our own people are more ‘unhygienic’ than hands from Morocco, Poland or Russia. But laws are better not to discuss like politics, religion and fashion. 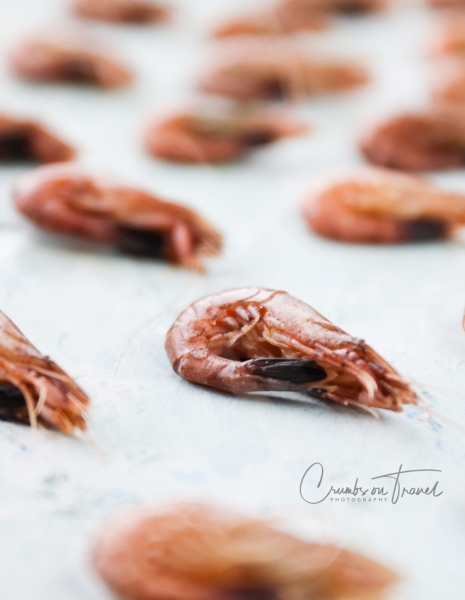 There are many ways to eat the little shrimp. Here it is typical to eat them in a roll, the so called ‘Krabbenbrötchen’. Also, possible on a slice of toasted bread or a dark rye bread slice with butter. For breakfast or as a snack you can order in restaurants scrambled eggs with shrimp. I just love love shrimp cocktail, shrimp served with a thousand island dressing on lettuce. Shrimp soup is also a restaurant dish, oftentimes made with cream. In some regions you can find shrimp aspic (Porren in Suur), fish stock and gelatin. In Lübeck there is a restaurant in the basement of an old abbey called ‘Kartoffelkeller’. It’s a restaurant specialized in potato dishes. Order an oven potato with cream cheese and shrimp. Delicious! ‘Krabbensalat’ is like chicken or tuna salad but instead with shrimp. In many fish recipes there are shrimp as side dish or garnish.

Today when I come back to Germany one of the first things I eat are shrimp. I like them plain, but also on a slice of ‘paleo’ bread or very often I just mix them in my salad. Sometimes I have them with potatoes and butter, salt and parsley. The other day I had a couple of hard-boiled eggs with shrimp and some flax seed oil on top. So delicious! Sometimes I am sorry that there are no other places where I can eat them but then I think it is great that it is like that because this way they are always something very special to me and I never overeat them.

If it happens you come to North Germany and you are a fish lover or just curious about different food: don’t miss eating a ‘Krabbenbrötchen’ or a shrimp soup!

In Travemünde near to Lübeck there is the best fish shop ever! It is no secret anymore as they are known worldwide and have been awarded many times. But they still are located in a very tiny shop and make all the salads and fish creations (and more) by their own. You can eat also fish soup and rolls with fish or shrimp even though they have just two tables to stay at. If you are in the region, they will give you a perfect North Germany experience! The shop is called ‘Fisch Wöbke’.

( I am NOT sponsored by the shop, it is my very own opinion!) 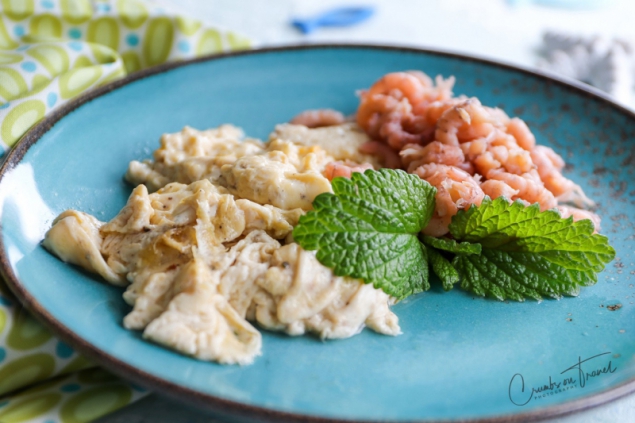 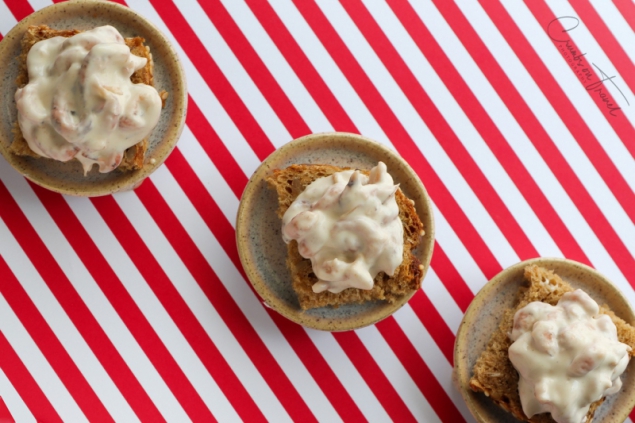 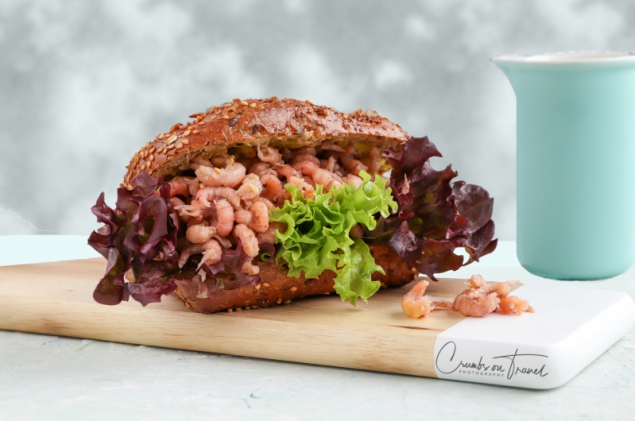 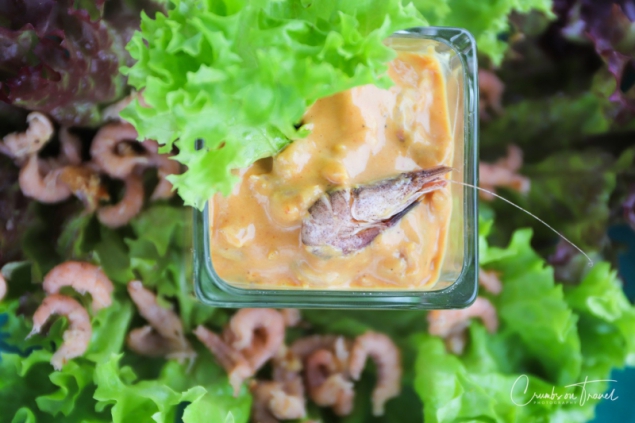 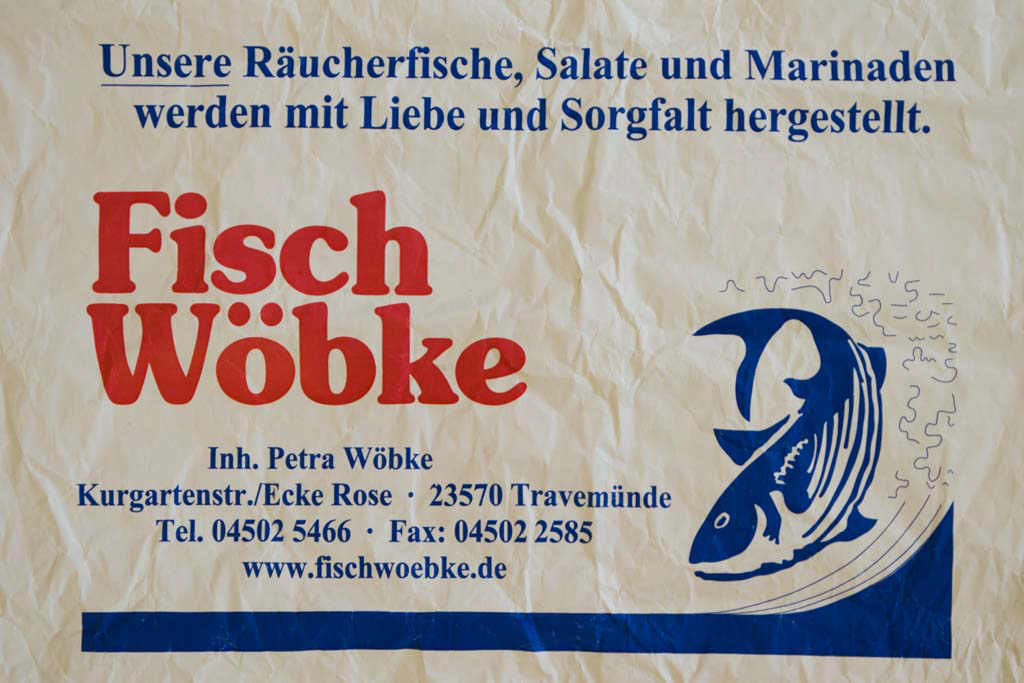 This entry was posted in CRUMBS, Europe, Germany, markets, ON TRAVEL, Schleswig-Holstein and tagged traditional german food. Bookmark the permalink.