The first Bridge over the Grand Canal in Venice – Rialto Bridge 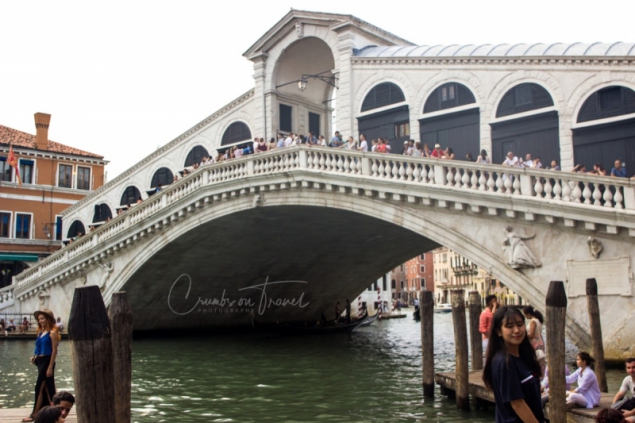 When I think about Venice, I think also about the Rialto bridge. It is so famous that I couldn’t wait to see it in person. Photos give you a kind of idea but when you are actually in loco the feeling can be completely different. That’s what happens very often to me.

The Rialto bridge has a long history. The very first bridge was built in 1181 as a pontoon bridge (floating, wooden bridge). The name was different, too: Ponte della Moneta (like the One-Penny-Bridge in Dublin). That name was because before the bridge, one had to pay a quarter of a Venetian coin to cross the river by boat.

Over time the market at the Rialto quarter on the eastern bank increased and the bridge started to be too small for all the traffic of pedestrians and carts. In result the bridge was rebuilt as a wooden bridge just 70 years later. The bridge was well-conceived as it had two ramps that could be lifted for the passage of the taller sail ships. This was the time to change the name of the bridge, to what today is so well-known, Rialto Bridge.

And soon it would be very helpful as the bridge was destroyed nearly completely in a fire in 1310 and collapsed in 1444 under the extensive weight of a crowd watching a boat parade. 80 years later the same happened again. In the first collapse no one died, in the second only two people. But the bridge was both the times heavenly damaged.

Already 20 years earlier there was the first thought of building a stone bridge instead of the weak wooden bridge. So over decades architects designed several proposals, Sansovino, Palladio and Michelangelo amongst them. But all of them involved multiple arches over the canal and it seemed inappropriate.

Antonio da Ponte was the ‘winner’ and built a stone bridge with one single arch only spanning over the canal. The construction was completed in 1591 and looked very similar to the previous wooden version. Vincenzo Scamozzi, famous architect at that time, predicted another collapse for the bridge. But still it is standing and today it is more than ‘just a bridge’, but a tourist magnet.

Some interesting facts: the arch is 28 meters long. For holding the foundation there are 24 logs of elm in the ground and all together 24 shops, on both sides of the bridge. There are three ramps on each side: one large one with a 10 meters wide stairway and two ramps of three meters wide before arriving at the top. Under the high middle arch there are some sculptures on one side. On the base you can read the date of the foundation of Venice (25th March 421) and the construction date of the bridge. To build the bridge Venice had to pay 250.000 ducats, which would be today a sum of around 2.5 million euro. 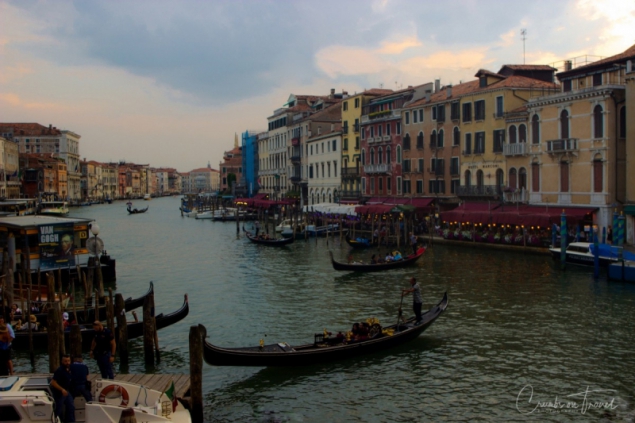 I had a closer look at the bridge the evening before leaving Venice. I didn’t even notice the bridge when I arrived. I guess because of the many people. Countless tourists were standing everywhere and taking selfies. Or photos of someone on the bridge from the shore. Moments when I think how nice our world was when we had no cellphones and only a few people had a camera. The bridge itself has nice, super expensive jewelry shops. But it’s even difficult to do some window shopping as so many people are actually on the bridge. I guess the only moment the Rialto bridge is really beautiful is late in the night or super early in the morning. Maybe also in winter in the morning mist. This warm summer night it was definitely something that got an ‘aha’ out of me, nothing else. Maybe I was a little disappointed, but honestly: Venice has so many beautiful more hidden gems that the bridge can be easily skipped in a second visit here. But I liked very much to know about the history which I think is very interesting. 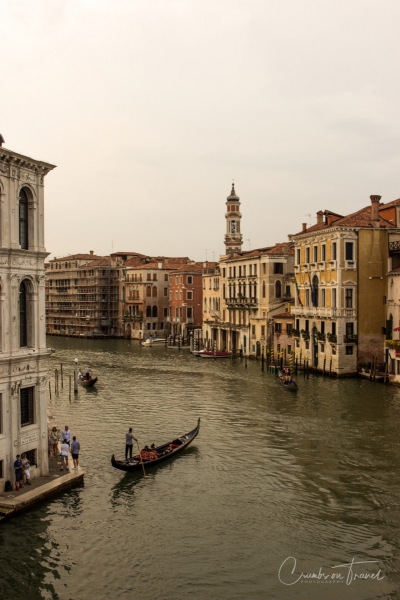 In the Drawing Room of Europe – Piazza San Marco in Venice
Face Behind a Face – Venetian Masks
Venice – Metropolis in the Blue Lagoon
This entry was posted in Europe, Italy, ON TRAVEL, Veneto and tagged venice. Bookmark the permalink.