The Church of Gold in Venice 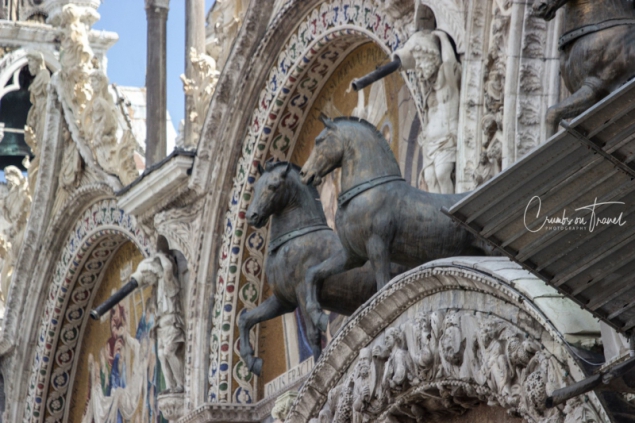 The Basilica of Saint Mark – or also known as the Basilica di San Marco – is maybe the most famous church in Venice. It is located in the east side of the Piazza San Marco and at it is connected to the doge’s palace. The church is built in the Italo-Byzantine architecture. Once it was just the doge’s chapel, which in 1807 became the seat of the patriarch of Venice. The very unique and impressive design of the church and the gold loaded ground mosaics were a symbol of power and wealth. The golden arches gave her the name ‘Chiesa d’Oro’ (Church of Gold). 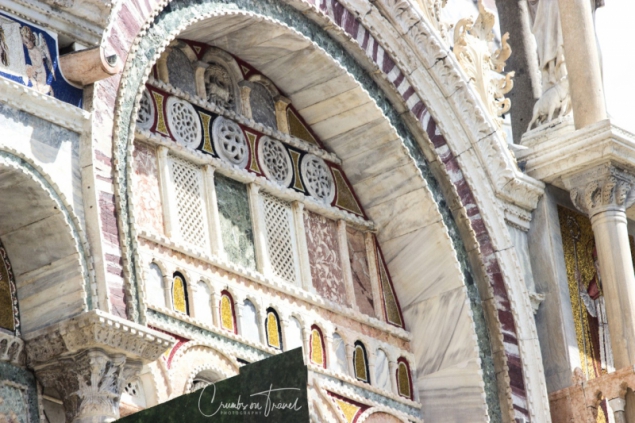 The church has a long story with a sinister beginning: The first chapel was built in loco in 828 and completed only 4 years later. That was after Venetian merchants have stolen the (supposed) relics of Mark the Evangelist from Alexandria.

150 years later the church was burned in a rebellion, another sinister story. Because the Venetians wanted to get rid of the reigning doge, they locked him in his palace (you remember: it was connected to the church!) and set the palace on fire. The palace and the church burned down, the doge and his son died. His other son and his wife survived, though. Both, palace and church, were rebuilt only a couple of years later.

There are a hundred years that are not certain but the church, like we know it now, was built around 1063 and in the following 50 years consecrated various times, maybe because of various parts of the enormous church getting finished.

All those years the relics of the saint were missing and rediscovered by Vitale Faliero, doge of that time.

The Pala d’Oro (Golden Cloth) is a high altar retable, an incredible huge wooden table decorated with gold and Byzantine enamel. It was ordered in Constantinople and installed in 1105 in the Saint Mark’s Church. Just a year later for some reason a big fire damaged a lot of the church and art within. At that time the facade was different from today and also the narthex (the first entrance area, BEFORE you actually enter the church, a kind of pre-corridor) was missing. Both were built much later in the 13th century. 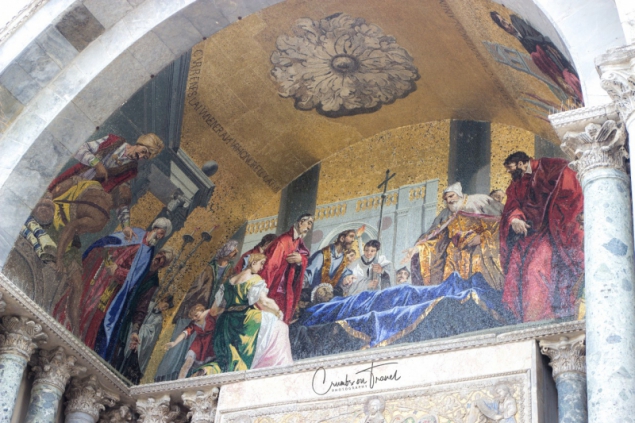 Over the centuries there were alterations in the decorations, though the golden domes and mosaics remained untouched. Many columns, friezes, capitals and such are from other places, mostly coming with the various crusades and often older than the basilica itself. Slowly brickwork was covered with fine marble.

The church initially was meant to be the private church for the doge but by the 13th century it became the church of the state. Power of the procurators increased this way, too. Most of the doges were buried here, even though in the 15th century they were buried in the Chiesa Santi Giovanni e Paolo (due to running out of space in the basilica). With the end of the Serenissima, the Venetian Republic, the basilica became the place where the patriarch of Venice had his seat. 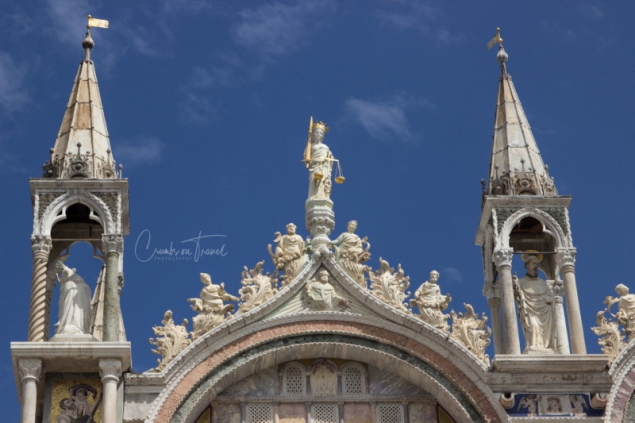 The huge facade has three levels: the lower with 5 arches and where you enter through one of the bronze doors. The upper part shows the golden arches which are a post-Renaissance replacement of the same theme before. Here you can find the famous horses. And then the domes and a lot of statues, some of them in their own pavilions. Look for the symbol of Venice: the winged lion! 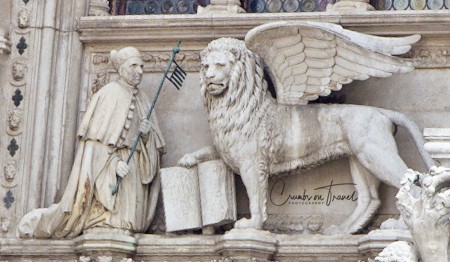 Inside there is a lot of gold. Gold mosaics wherever you look. Wonderful works, incredibly rich and impressive. The shape of the church is a Greek cross, with arms divided in three naves and a dome – which explains the many domes you can see from outside.

Just to prevent a stiff neck by looking up, have also a look on the floor. The tessellated marble flour is from the 12th century with various restorations during the time. You can see animal designs as well as geometric patterns.

I will not write about the many mosaics or other particulars – there are so many, so much marvelous art work, so much history… it would be an endless article. You will find enough information in loco. 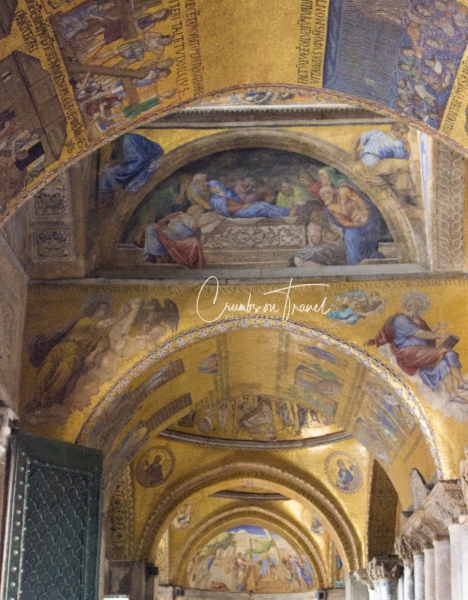 The treasury is something not to miss! Beautiful Byzantine art in metal, enamel and hardstone carvings, many of them coming from Constantinople after the fourth and last crusade. The treasury is situated in the old bell-tower.

There is a special fact to know: the building has several choirs. Here the Venetian polychoral style was born. Adrian Willaert (Netherlandish composer of the 16th century, founder of the Venetian School).

Take at least a couple of hours for this wonder of art, culture and history. When you sit in such an unbelievable place, your face up wondering with an open mouth where all this beauty comes from and then realize that there is no beauty anymore today in architecture, art and culture. Where has gone all that sense of magnificence? I am glad we still have places like this where we can enjoy something really great. 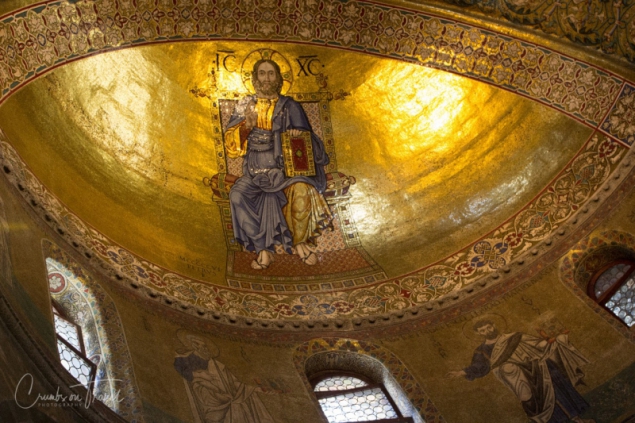 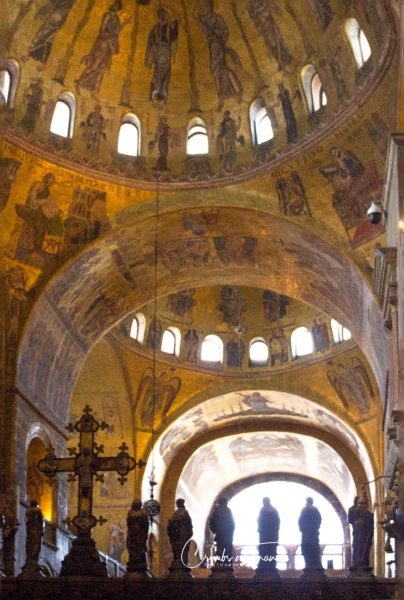 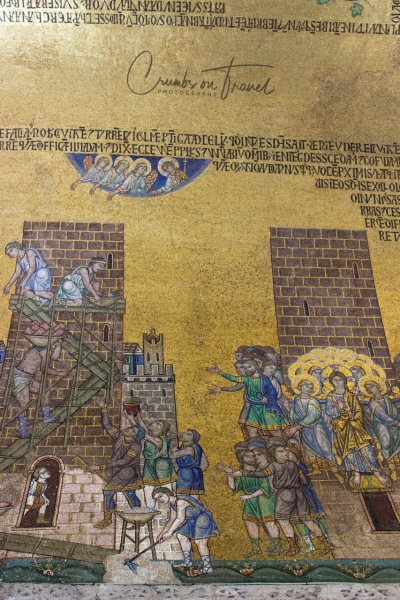 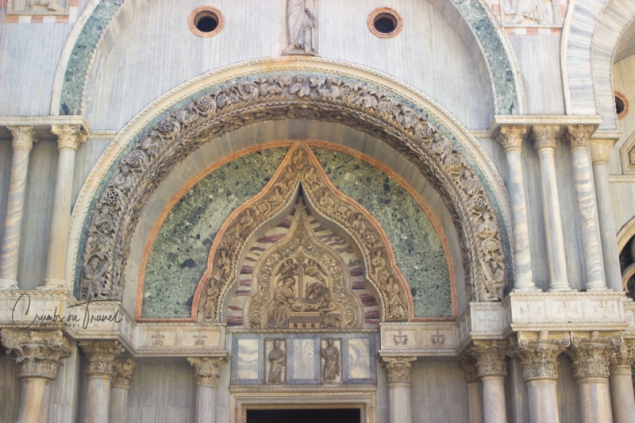 For further information:
Tourism Board of Venice
Website of Basilica San Marco

The first Bridge over the Grand Canal in Venice – Rialto Bridge
Fast Food and More in Venice
Like a Bridge over Troubled Water – Bridges in Venice
This entry was posted in Europe, Italy, ON TRAVEL, Veneto and tagged venice. Bookmark the permalink.