Stop Motion And The Festival of Colors 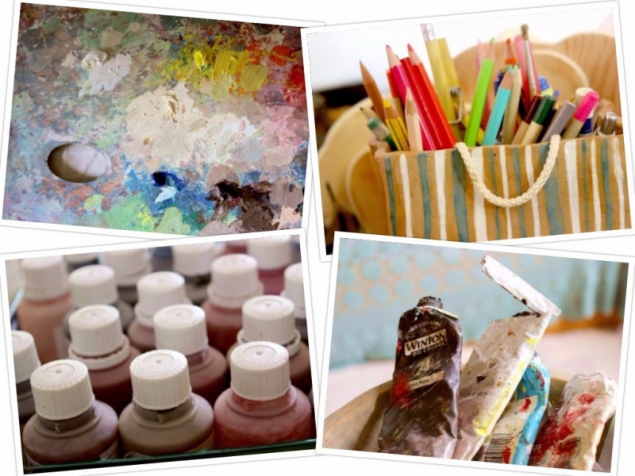 I’ve never heard of it before but it seems so right: stop motion. It is an animation technique with one object that seems to move but is an illusion of many pictures made and then displayed in sequence.

Last weekend I was at the Festival of Colors in ValdericArte, my favorite b&b in the Marche in Italy. And they offered not only a colorful lunch but also a workshop of slow motion.

All started in the late morning when guests arrived and had their welcome drink: made of kefir and fruit.

Some talks between perfect strangers, a group with small children and a look outside the window in the wild where huge snow flakes were falling. It seemed all but a spring day full of colors until now. 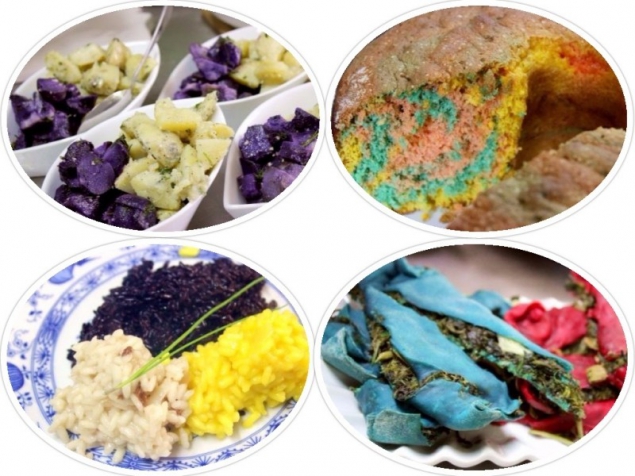 A little later we took our seats and started a very colorful lunch made mainly with plants and herbs found in the huge surroundings of the property. I always love to eat here even when not all is always paleo (like today). But nevertheless there was plenty of great food for me as well. 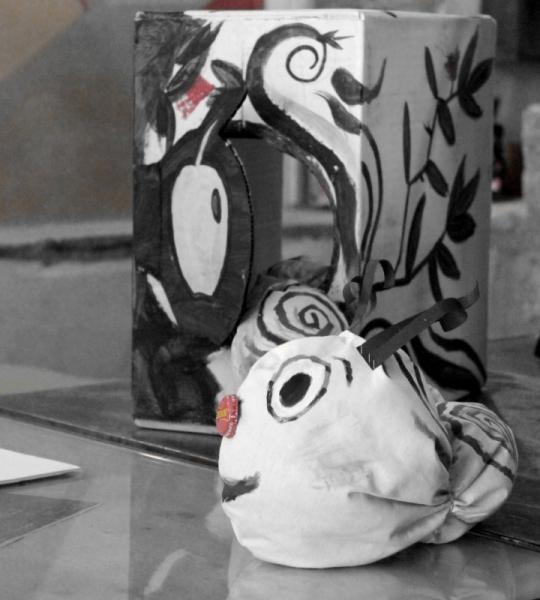 More than two hours and a coffee later the sun was shining in our hearts but as well outside. Spring came to say ‘hello’ after the winter waved his (hopefully) last good-bye for this year.

Meanwhile the people were talking and some already going away as they didn’t participate at the workshop I could observe Luca di Sciullo bringing in colorful boxes, a nice looking black and white ‘worm’ and a lot of wood shavings. Until now I had no imagination what will come… 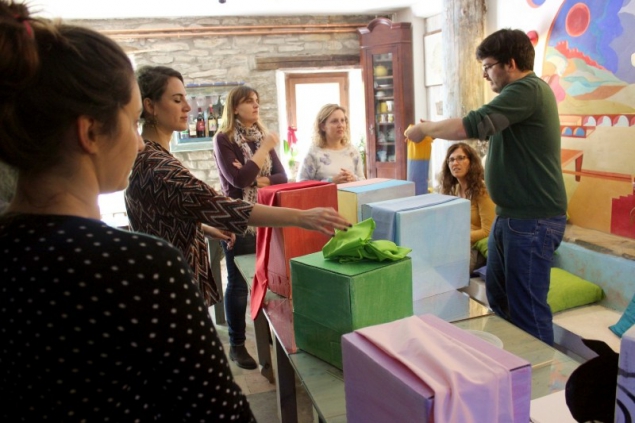 Luca di Sciulla is a young man who studied cinema and animation in Urbino. Later he goes to Bologna for a course about comic illustration at the Accademia di Belle Arti. He is doing different works and has as well an own YouTube channel with some of his works (see below).

Very calm and nice person he has a lot of humor as well. A little group of 8 persons got around him and listening to his explanations. 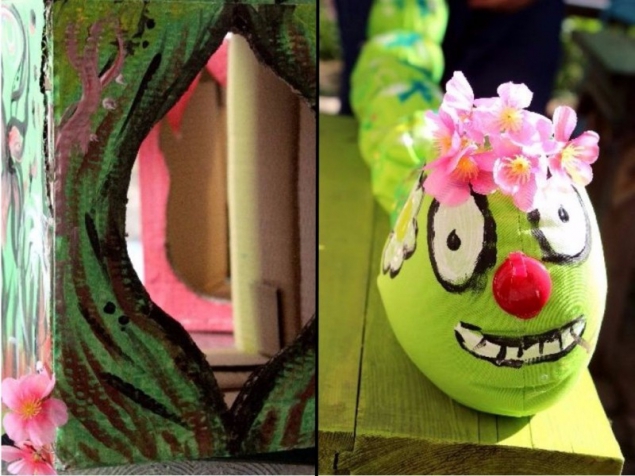 Stop motion is a technique of animation. An object gets moved again and again step by step and each time photographed. The picture frames later will be played as a continuous sequence. This way it seems that the object moves by its own. Stop motion with objects is called also object animation but it’s possible also with humans in order to have a fun effect.

The first ever stop motion animation was done by A. E. Smith and J. S. Blackton “The Humpty Dumpty Circus” in 1898. The first ‘King Kong’ from 1933 was done in this technique. A more recent and famous movie is Indiana ‘Jones and the Temple of Doom’, ‘Who framed Roger Rabbit’ and many others. 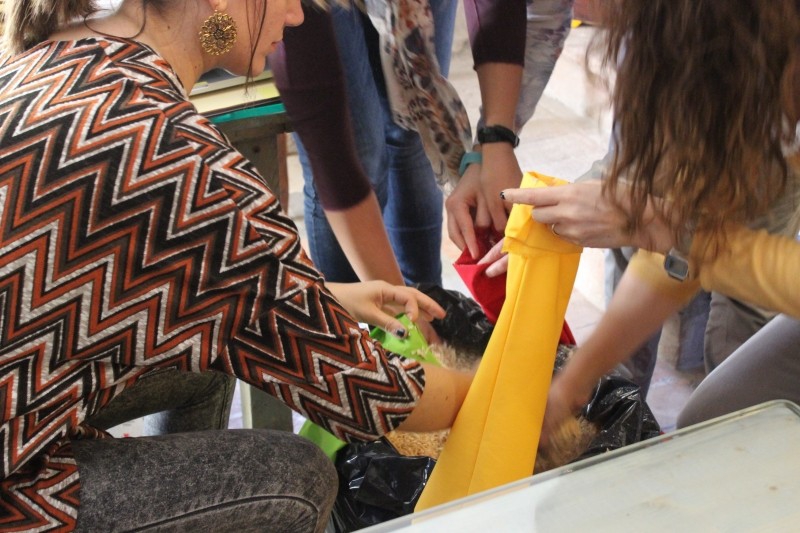 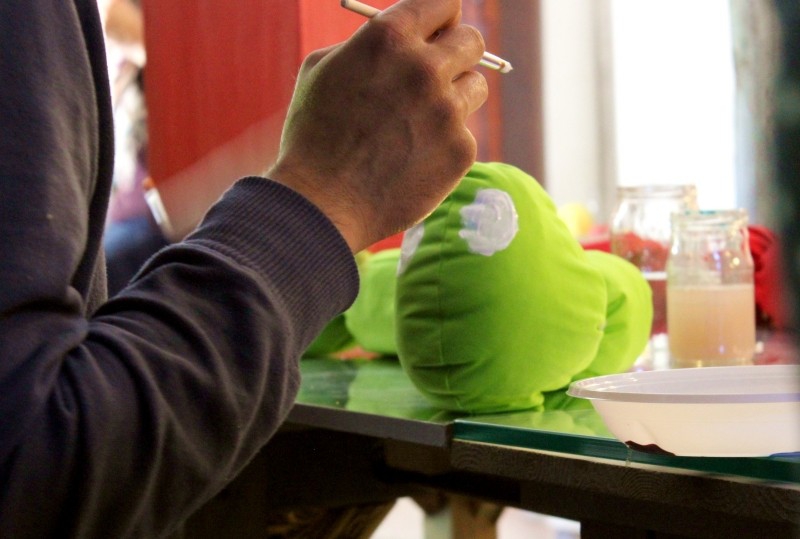 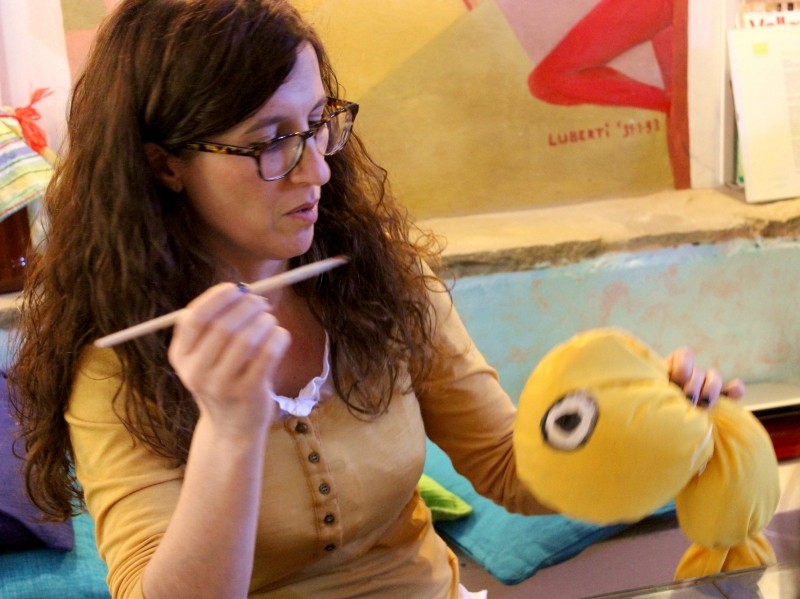 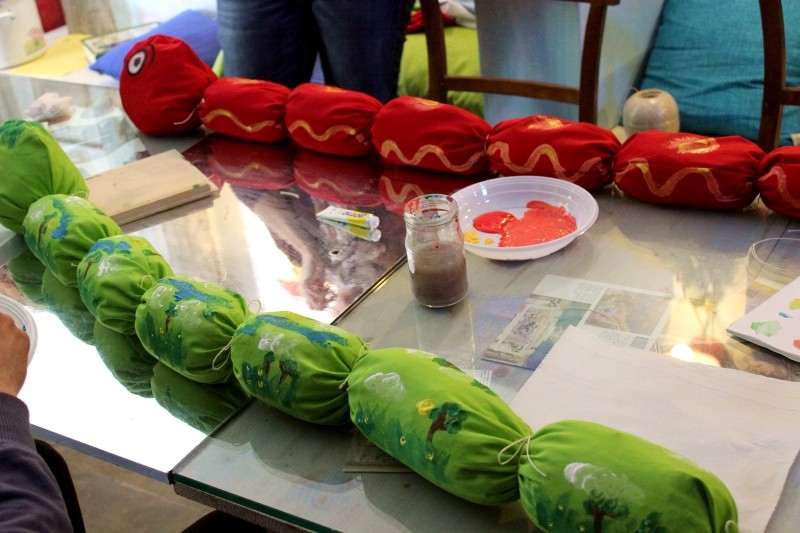 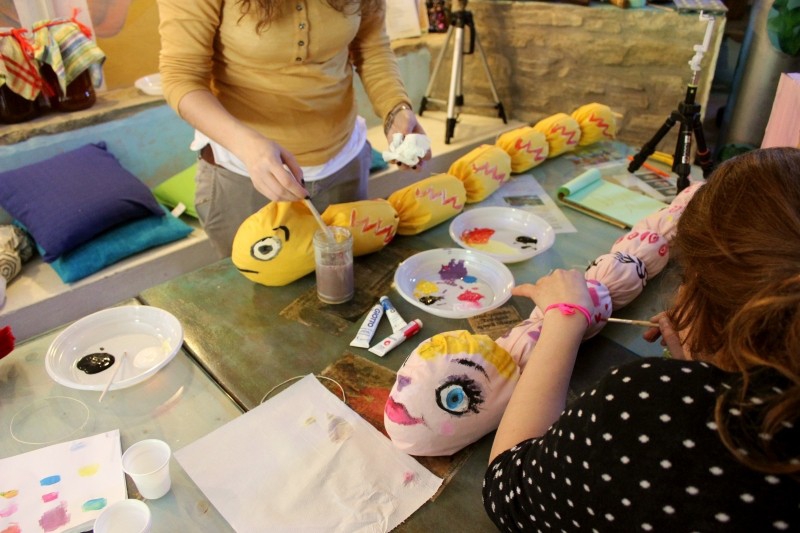 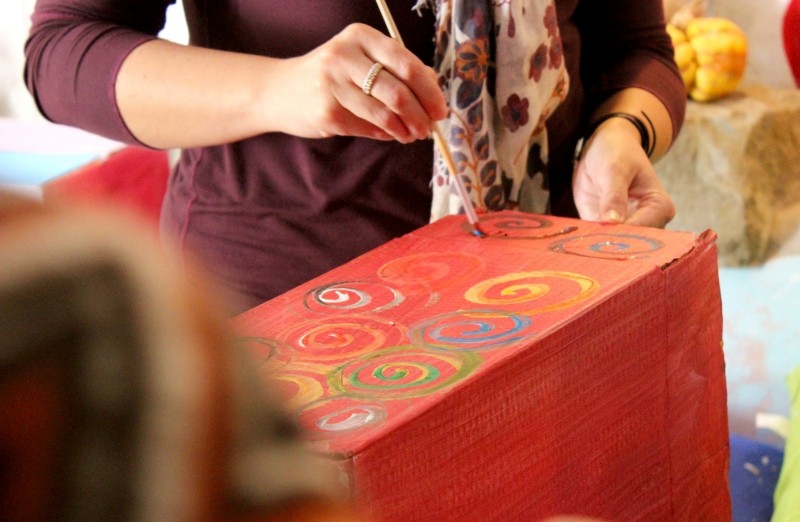 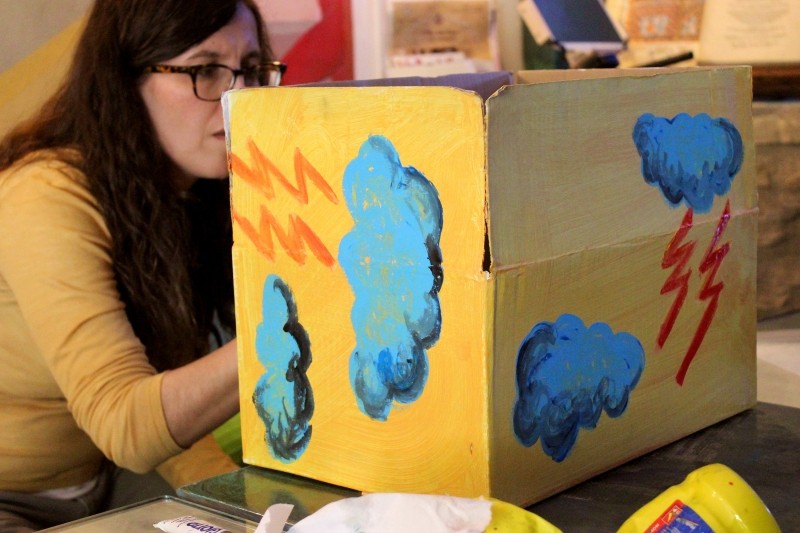 Out workshop was fun. There is Gianni, the worm, who has lost all his colors. So we created the Gianni with colors, four different. And the little houses where he enters changing the color every time. 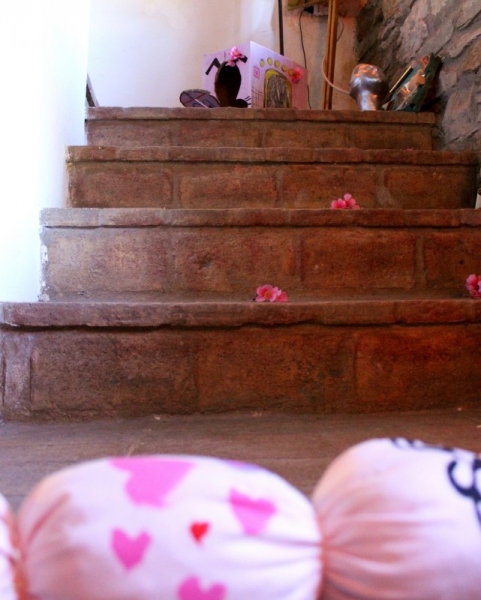 We prepared the worms out of colorfull fabric tubes filled with wood shavings. Later the worms got faces, decorations and life. The different houses were boxes also colorful decorated.

After a long hours work all were ready and we filmed Gianni leaving and entering boxes and his adventures in between. It was real fun! Every move was a picture and all the pictures later created a movie. 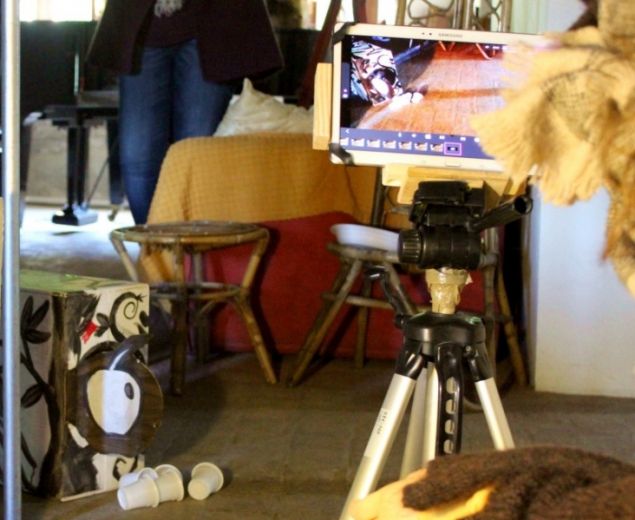 The day really started gray and sad like poor Gianni, the worm. But slowly with the food it got a real colorful, sunny and happy afternoon full of life and joy.

I loved this day and makes me think how important colors are. How important it is to have always a bright spirit.

Watching later in the Internet some of the movies in stop motion I remember a lot of movies I have seen as a child in this technique, oftentimes short clips. Did you? 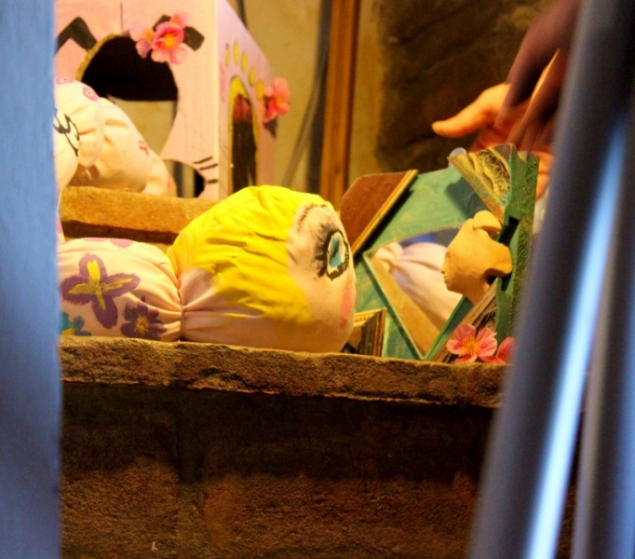 An example made with stop motion: Pizza

The worm Gianni in stop motion by Luca du Sciulla and the ‘team’ of the day: Gianni the worm

This entry was posted in Europe, events, Italy, Marche, ON TRAVEL and tagged ValdericArte. Bookmark the permalink.