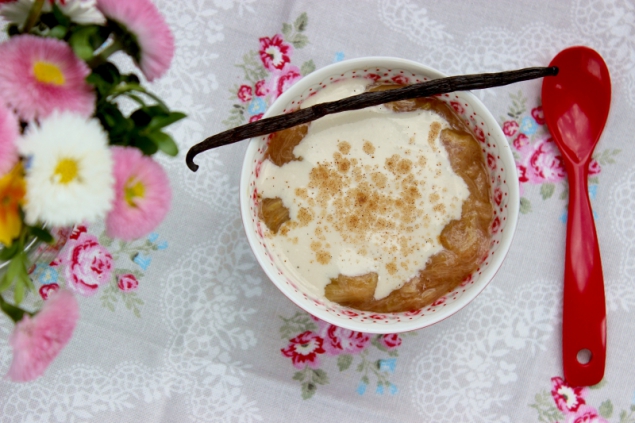 And why indulging in this fruity dessert I looked up in the Internet what are the benefits of this fruity vegetable.

Originally it was used for thousands of years by the Chinese people for medical purposes and was described already 2.700 years earlier. It was later used for the same purpose in Greece but only with the Islam it was more established in the Western world arriving on the Silk Route in the 14th century. Unbelievable: its costs where higher than for cinnamon or saffron.

I know rhubarb from my childhood as my granny had it in her garden and my mother sometimes prepared ‘Rhabarbergrütze’ for me in late spring. It is cooked to eat, I never had it raw.

There are some great health benefits of this plant. It has a lot of B-complex vitamins and only 21 calories in 100 gr of fresh stalks. The red variety has more vitamin A than the green one and has a good amount of vitamin K which helps a lot against Alzheimer’s disease. 95 % of the stalks are water and when it comes to eat this healthy vegetable normally everyone adds sugar or other sweetener as rhubarb is acidic. BUT: leaves are toxic and only stalks are used in the kitchen, roots for other purposes.

So far for the health benefits. Rhubarb is used mainly in pies and other desserts. But the roots are perfect for dyeing (for example for Easter eggs, tissue or hair)

I know it mainly as pudding and prepare for myself a rhubarb jam. Strawberries which are coming out nearly at the same period are often mixed with in. I like more the pure taste of each and rarely mix them. Rhubarb wine is on my list to try one day.

The pudding I am preparing is something typical for the Scandinavians I found out. I like it simple and so I just use rhubarb, honey and some carob as thickener. That’s it. Spices like vanilla or cinnamon I add in the additional sauce or ice cream.

If you want to grow it in your garden it is important to know it doesn’t grow in warm to hot places, needs good winters and a lot of good soil, best near to the compost. The poisoning leaves a gardener can use in a recipe against slugs and other leaf eating insects.

Did you know there is a rhubarb tart song (by John Cleese), it is praised in lyrics and there are people producing rhubarb paper?

Well, now I go and have the last rhubarb pudding with my vanilla sauce, cinnamon and a little bit of Bailey’s on the top. One of my exceptional moments… and think of all the vitamins I am eating, the unique taste and a nice rhubarb tart for next weekend. 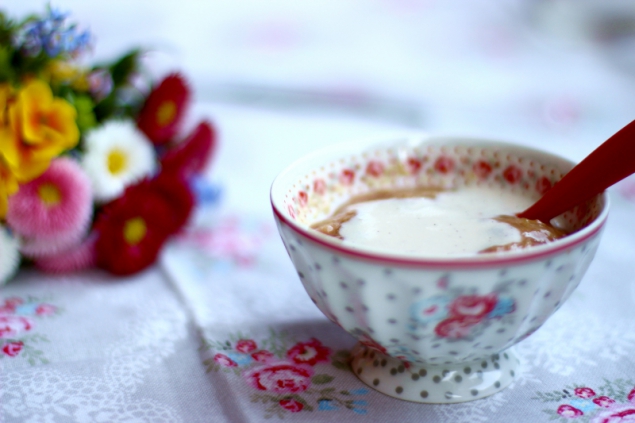 Rhubarb pudding is traditionally served with warm vanilla sauce. But whipped coconut cream is great as well. Or try it with vanilla icecream. A not paleo conform version would be also eggnog or Bailey's on top (both also paleo possible).

For further information:
Information about rhubarb
18 recipes with rhubarb

Whoopie is Always a Bite Worth ...
Ice cold Love – Cherry Coconut Dessert with Pistachio Marzipan
This entry was posted in CRUMBS, desserts, recipes and tagged dessert. Bookmark the permalink.

One Response to Rhubarb: Fruity and Multi-Talented