Relaxing in the Boboli Gardens in Florence 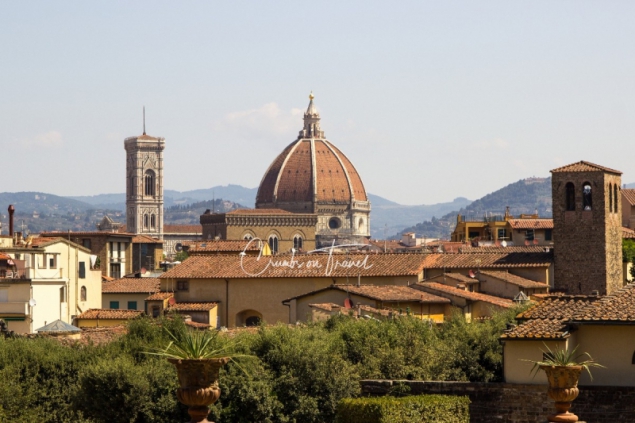 On our tour through Florence we saw many museums and before we had our tickets for the Uffizi we definitely needed some rest in a ‘non-too-city-like-environment’. I thought the gardens of the Pitti palace would be perfect. They are still in the middle of the city but give you also the feeling to be away from traffic and chaos.

The Pitti palace was built by Luca Pitti, an ambitious Florentine banker, to contrast the so hated de’ Medici family. It’s a vast Renaissance palace that looks to me like a fortress. It’s located on the south side of the Arno river and not far from the Palazzo Vecchio. Later the de’ Medici lived here, Napoleon used it as a base and it housed shortly the authorities of the new Kingdom of Italy. Today it’s a huge museum. The Boboli Gardens where we wanted to relax, is on the backside of the Renaissance complex. 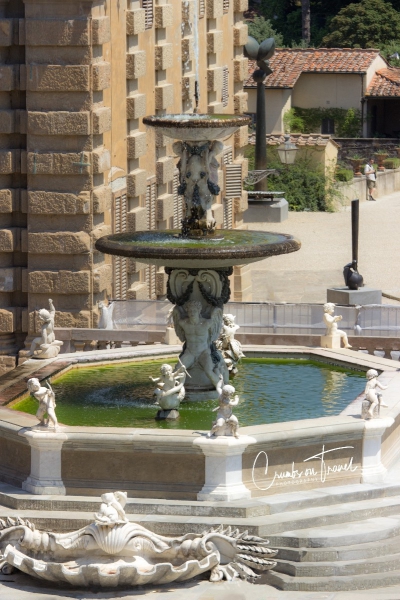 It was one of the first 16th century Italian gardens with long axial developments, alleys, a lot of fountains and statues and also public and private spaces. We saw a grotto, some garden temples, a Kaffeehaus and a museum. The particularity for these gardens is that no one had access into the area and no parties (very unusual!) have been held here.

The first thing I noticed is the amazing view towards Florence inner city with the cathedral, the bell tower, in the background the rolling hills of Tuscany.

The garden’s land was bought from a family called Bogoli and so the name for the gardens refers to that family. The gardens were wanted by Cosimo I de’ Medici for his wife Eleonora di Toledo. The construction started shortly before 1550 by Niccolò Tribolo and was continued by Bartolomeo Ammanati. Some sculptures are by Bernardo Buontalenti, like also the Grotto (which is very interesting).

In front of the palace there starts the amphitheater surrounded by high statues. From here a wide open staircase leads up the hill to the fountain of Neptune (by sculptor Stoldo Lorenzi). Because there is no water on the land, it was built a conduit from the Arno river to the garden.

In the 17th century the Boboli Garden was enlarged to be 45.000 sq m/111 acres. During the time it became an outdoor museum of sculptures of different periods and Roman antiquities. 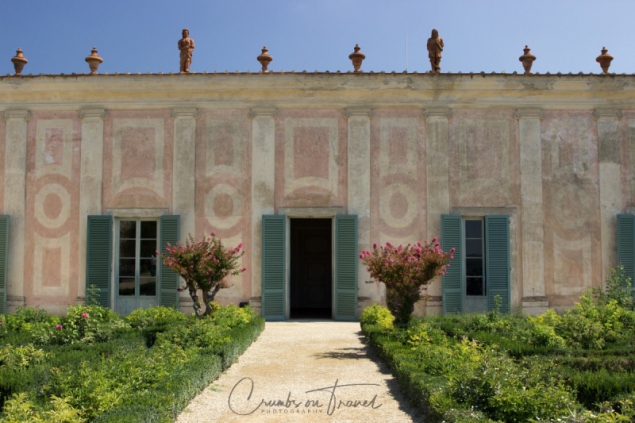 While walking through the gardens (which are pretty big with a variety of different landscapes), we passed the Kaffeehaus situated on a hill. It was closed unfortunately. It’s a Rococo style building in white and light green. For some reason the cupola looks to me like a lighthouse.

We visited the porcelain museum, too. It is located in the Casino del Cavaliere on the highest point of the Boboli Gardens. It was opened only in 1973 and displays more than 2.000 pieces. It is a porcelain collection of a period of more than 250 years, from the end of the Medici until the unification of Italy. We saw porcelain from Capodimonte in Naples (one of the most famous porcelain factories in Europe), from the Tuscan Ginori in Sesto Fiorentino, porcelain from Vienna and from Meissen in Germany. I didn’t know when visiting the museum that it is one of the most visited museums in the world. 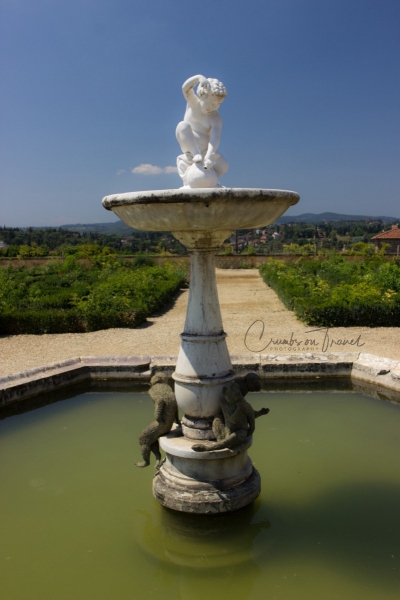 The Boboli Gardens in Florence are very easy to reach. You need a ticket to enter and unfortunately the line is long to get one. Maybe get one the day before or early in the morning. But they are definitely worth seeing, especially after a long walk through museums like the Uffizi, the cathedral with the baptistery and/or the bell tower. We spent a couple of hours in the place and enjoyed sitting in the shade of high trees and amazing statues, listening to bubbling water and having a nice visit in the porcelain museum. We didn’t see the whole garden, it is really big! 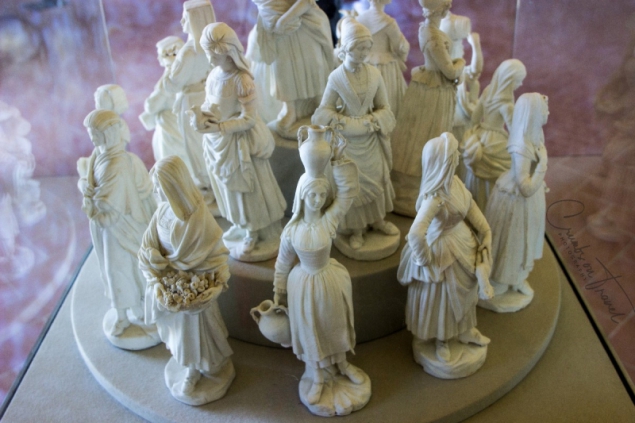 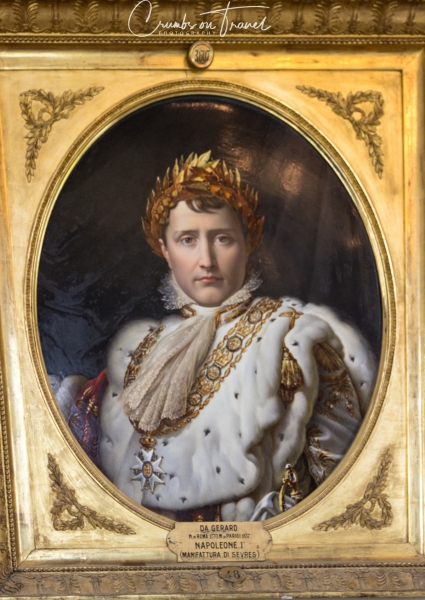 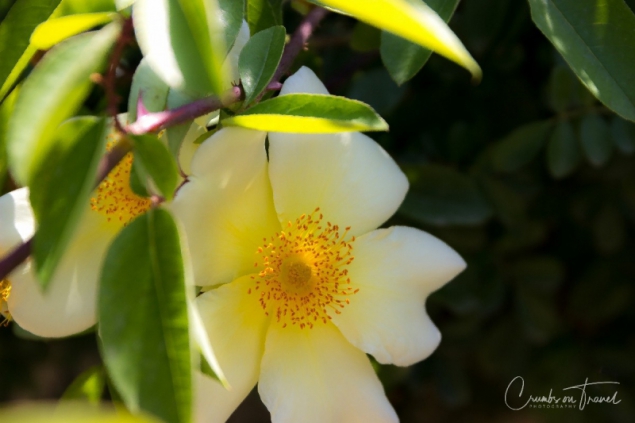 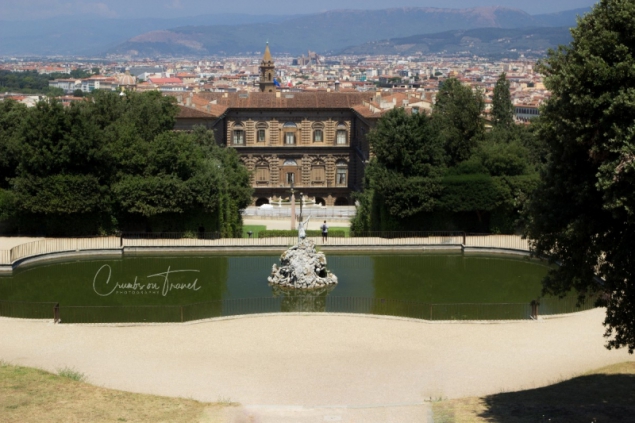 Between History and Veggies – Il Mercato Centrale
Santa Maria Novella – The First Great Basilica of Florence
A Bridge of Jewels – Ponte Vecchio in Florence
This entry was posted in Europe, Italy, ON TRAVEL, Tuscany and tagged florence. Bookmark the permalink.