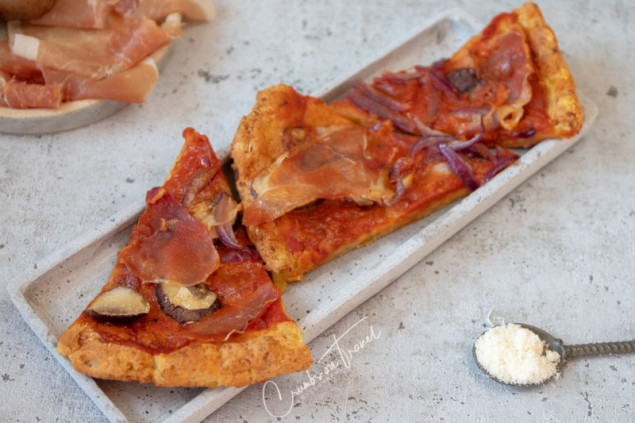 In Italy not only the traditional pizza is called pizza but also alternatives like eggplant pizza, rice pizza, polenta pizza, pizza muffins and much more. Pizza in Italy means a soft base with tomato sauce and other ingredients on the top. Even the frittata di spaghetti is called spaghetti pizza in some parts of the country.

I stumbled the other day over a recipe of a potato pizza. I thought that is a great alternative maybe even my man would like, as he is deeply in love with all potatoes. So I gave it a try and what can I say? Really good stuff! 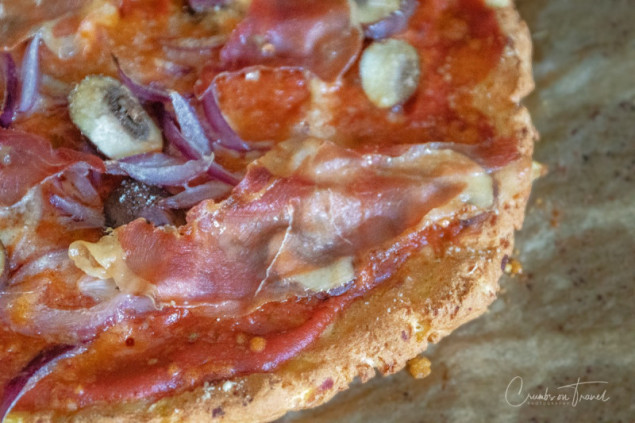 Essentially the pizza base is made of smashed potatoes, an egg, salt and pepper and some flour. I used a self-made mix. I made the potato pizza twice, one without and one with some baking powder. Both turned out the same. Better to omit it though.

The pizza is cooked twice. First without any toppings and around 20 minutes on high temperature, just to get it a crispy and brown base. Then you take the pizza out of the oven, put all your toppings – in my case tomato sauce, onions, mushrooms and cheese, sprinkled with some olive oil – put the pizza back an additional 10 minutes just to get all cooked and the cheese melted. When I got out the pizza I put some prosciutto on the top as well.

The base is crisp and the potato taste is not really recognizable. What I really like: it’s not that ‘gooey’ like a wheat pizza.

I used 4-5 medium sized potatoes, cooked, peeled and mashed them before adding the other ingredients. When I put the dough on the baking sheet I press the potato dough pretty thin in the middle and let a little rim around. I like a thin pizza, not a high one. It’s a pretty fast way to have pizza and totally gluten-free. Though it has a good amount of carbs and you easily will get tired after this yummy lunch. But who cares on a rainy, dark winter day? So: 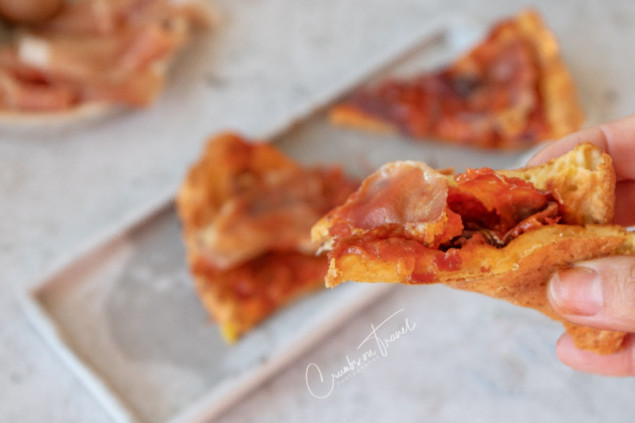 You can use whatever flour you like. Store-bought paleo or gluten-free flour works as well. I would not recommend a very nutty or sweet flour like almond or chestnut flour. Pay attention with coconut flour which absorbs all the moisture, and you should reduce the quantity in that case.

Healthy and Delicious – Organic Olive Oil
From a Bitter Fruit to Extra Virgin Olive Oil
One of my favorite Antipasti – Eggplants in Olive Oil
This entry was posted in CRUMBS, main dishes, recipes and tagged traditional food italy. Bookmark the permalink.