One of the Oldest Buildings in Florence – The Baptistery 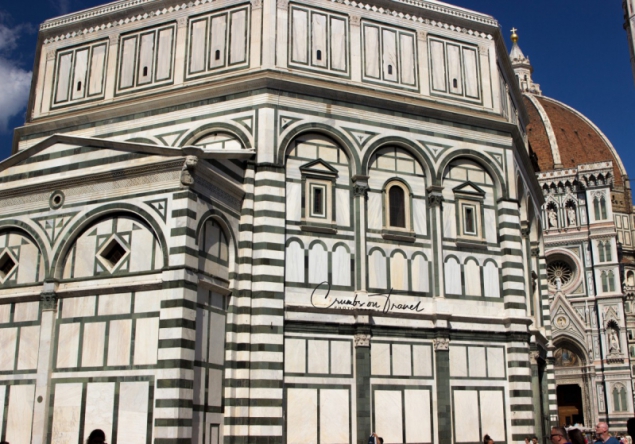 The baptistery is standing in two squares: the Piazza San Giovanni and the Piazza del Duomo. This is because the one square where the baptistery, the basilica and the bell tower are standing has two names: the west side is called Piazza San Giovanni, the east side Piazza del Duomo. The baptistery is part of the religious complex in Florence and one of the most visited places in the world. Members of the Medici family, Dante Aligheri, Macchiavelli, Vespucci, Botticelli, Gallilei…. and many more famous personalities were baptized here.

The baptistery was constructed between 1059 and 1128 in the famous Florentine Romanesque style which influenced very much the following architects in their building styles. Brunelleschi, Alberti and Talenti are among the most famous architects who constructed in the later Renaissance style.

It is already an outstanding building for two reasons: it is separated from the dome (like it was usual at those times) and it has an octagonal shape (eight is the symbol for regeneration in Christianity). It matches perfectly with the rest of the buildings in the piazza. The bronze door is the first thing you contemplate when you enter the building. There are three doors actually: through one you enter on the north side, (by Ghiberti, 1403 – 1424), through the opposite you leave (south side, by Pisano, 1330) and one stays closed (the one in front of the dome). Michelangelo, Lorenzo Ghiberti and Andrea Pisano are the creators.

As it stands today, the building is built on old walls, a Roman domus with mosaic floors from the 1st century. Nothing is certain what was here after that. The current construction is from between 1053 and 1128. The inside seems to be just from marble in all colors and gold mosaics. It is incredible how richly it is decorated. I stood for a long while to look at the golden cupola until I decided to take a photo and look at it there with more ease.

Without the many artificial lights, I think, the inside would be rather dark. But the spot lights are reflected in the white marble and gold and let it all shine very much. Unfortunately we could not go on the upper walkway to see the amazing mosaics of the floor which are many and different.

I found it very interesting that there is the tomb of the Antipope John XXIII (born to a noble family in Procida, he was a soldier before becoming a churchman who later opposed to the Avignon Pope). I didn’t know he was recognized by the Florentines as Pope.

The baptistery is of course small compared to the huge cathedral ‘next door’ but it is so richly decorated that it takes a good while to see most of the building. I was sorry about not having seen the floor from a higher point, I saw photos later and saw how amazing they are.

To enter you need a ticket you can buy in the ticket office opposite. In the ticket is included the dome, the crypt, the museum, the bell tower and the cupola (which needs to be booked in advance!). The ticket allows you to visit the monuments within 72 hours after the first visit in one of them. A reason why we decided to climb up the bell tower early the next morning to avoid the heat and crowd. 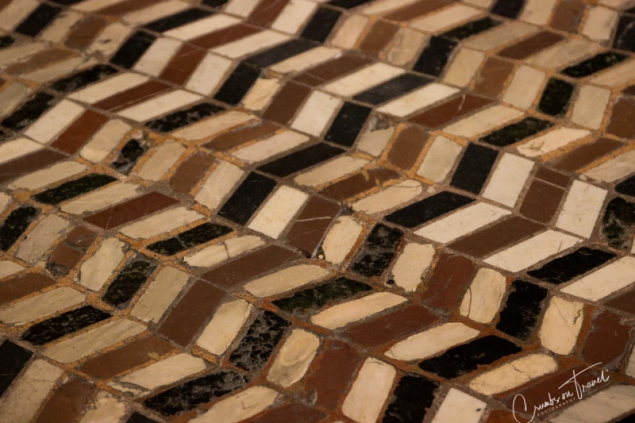 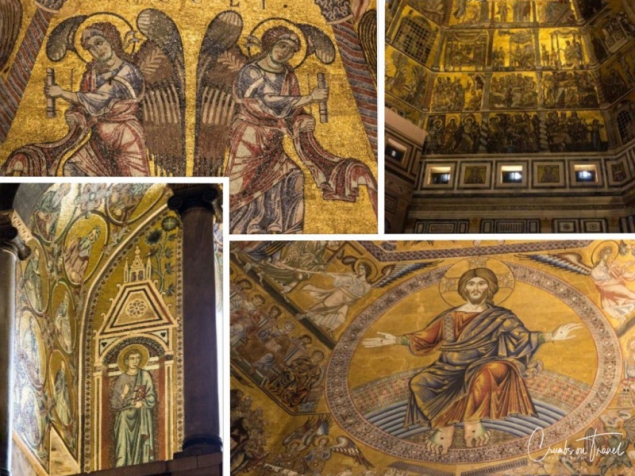 Relaxing in the Boboli Gardens in Florence
With Michelangelo in the Uffizi in Florence
Santa Maria Novella – The First Great Basilica of Florence
This entry was posted in Europe, Italy, ON TRAVEL, Tuscany and tagged florence. Bookmark the permalink.