On the Ferry from Casamicciola to Pozzuoli 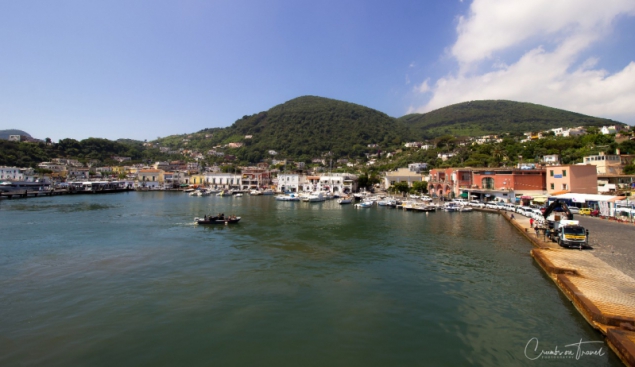 I love to take a ferry from Naples or Pozzuoli (north of Naples) to go to Ischia. The approach to the island gives me that warm feeling of coming home. Especially now that I don’t go back too often. In the past I lived half my life on these ferries as a tourist guide crossing over to the mainland at least a couple of times a week. And in summer the sea is like a mirror, just super calm.

So on the way back I took a few pictures from the deck to the islands Ischia and Procida and to the mainland with the Capo Miseno, the little town of Baia and Pozzuoli. I always enjoy the breeze, the sun and the call of the seagulls that follow us. Some of them are so good and take a piece of bread out of your hand while they are flying. 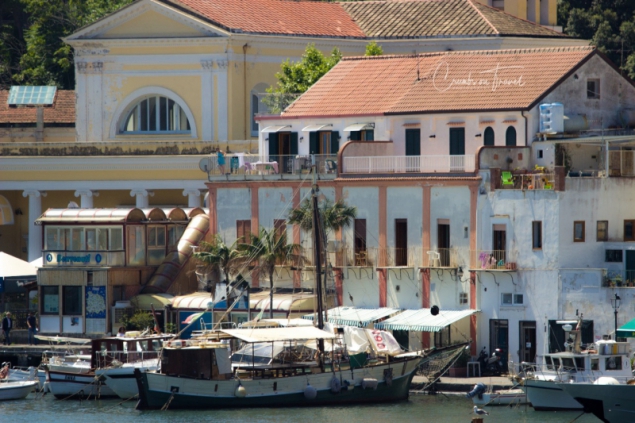 We first had a very short stopover in Procida, the neighboring island of Ischia.

A little bit about Procida: The little island is situated right in the middle between Ischia and the Capo Miseno and Monte Procida on the mainland. Attached to the island there is a smaller one, Vivara, which is a protected area. The island is part of the Flegrean islands and born with a volcanic eruption a long time ago. There are settlements since the first Greeks came here around the 8th century BC. During the Roman period it was a place for the patrician class and during the middle ages people started to live in the ‘Terra Murata’, a fortified village because of the continuous devastation by Vandals, Goths and Saracens.

Today the island is a touristic place which still has its charms of the fishing villages. In 1957 the very fist underwater aqueduct in Europe was built from Naples to Procida. The island has been a film set for many movies such as ‘The Postman’ with Massimo Troisi and ‘The Talented Mr Ripley’ with Matt Damon.

We stopped just for a few minutes in this beautiful place before leaving towards the mainland. I have been a few times to Procida and I love of course the little port of Corricella, one of the most colorful and romantic places. 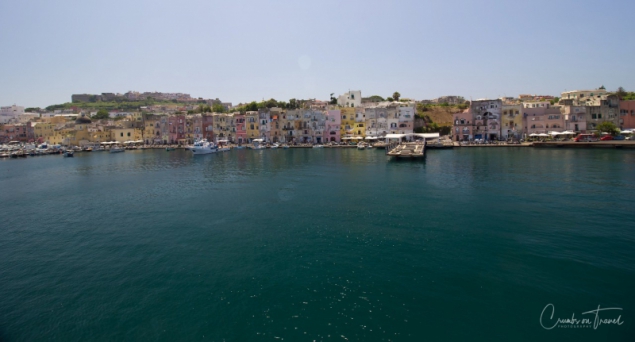 On the way to Pozzuoli we could see Monte Procida and the Capo Miseno. Here you can see some grottoes right at sea level, where villas often have there private entrance from the sea with stairs up through the mountain.

Here is also a very important blue mussels farm. The area of Naples is famous for their dishes with mussels like ‘spaghetti con cozze’ or ‘impepata di cozze’.

And a little bit about Pozzuoli: Pozzuoli is situated in the middle of the Campi Flegrei, a stinky (sulfuric) volcanic caldera. An originally Greek colony, it was the main hub for exported goods from the Campania, for example grain, glass, mosaics and marble. At Capo Miseno there was the largest naval fleet of the ancient world. Many great Romans lived here, had at least a summer villa in the surroundings. Here also they ‘discovered’ how to make concrete that actually is holding the cupola of the Pantheon in Rome, the largest unreinforced concrete dome. Have you ever seen it? Spectacular!
From the Roman era there is still to see the Macellum near to the port and the Flavian amphitheater a little town inward. It is today the home of a famous Academia Aeronautica. In 1980 there was a very bad earthquake with nearly 3.000 dead and 250.000 homeless. The town is famous for a lot of bradyseism that can uplift or lower the ground. It’s a very interesting geological area and also for diving deep into the Napolitan culture. 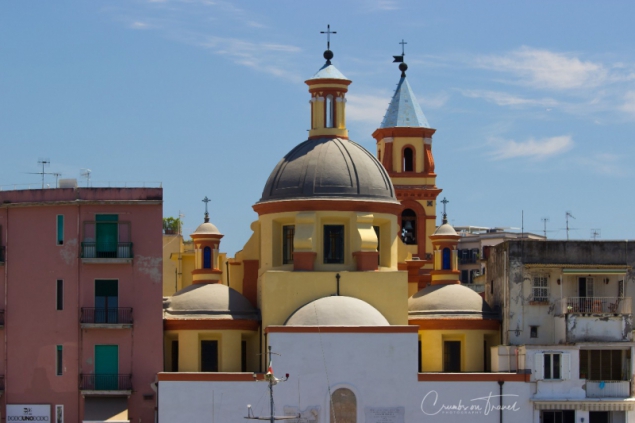 There are ferries from Medmar, Carremar, Snav and Alilauro. They go between the island of Ischia with 3 ports – Ischia Porto, Casamicciola and Forio – and Naples or Pozzuoli. Of course there are also ferries and boats going to other places like Capri, Amalfi coast, Ponza and many other routes.

We took the Carremar ferry to Pozzuoli as it is a little shorter in time than the one to Naples, and we wanted to drive up along the coast north to Rome on the Via Appia. I enjoyed the ferry ride very much, my sweetie, I guess, a little less, as he doesn’t like to be on boats or ferries. 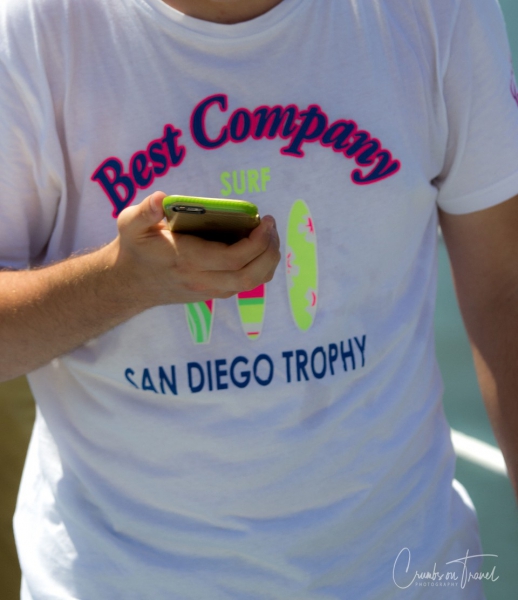 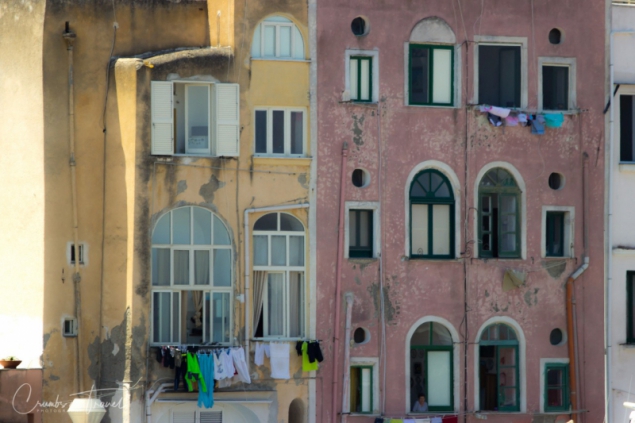 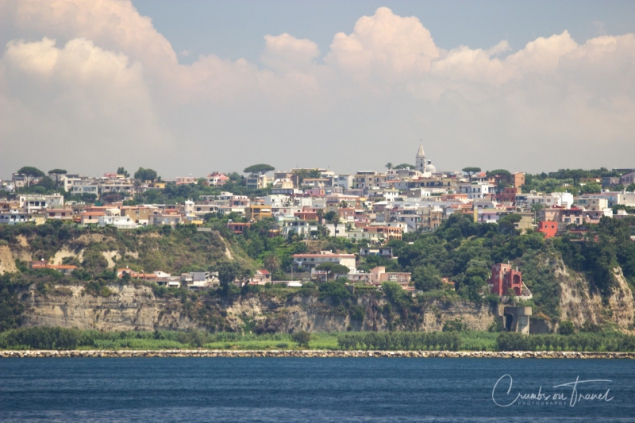 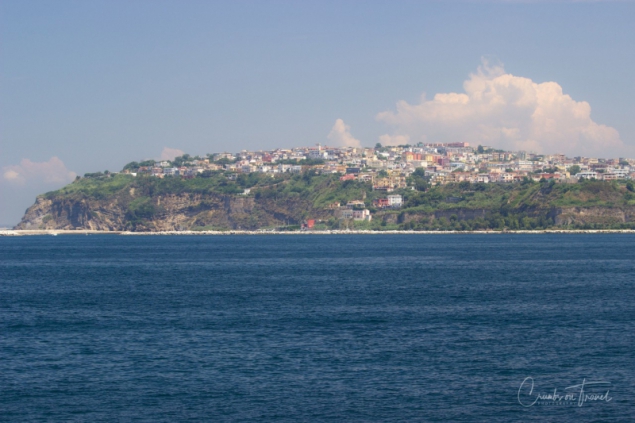 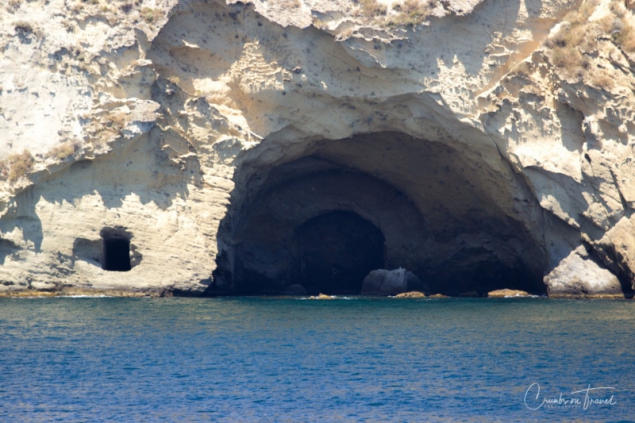 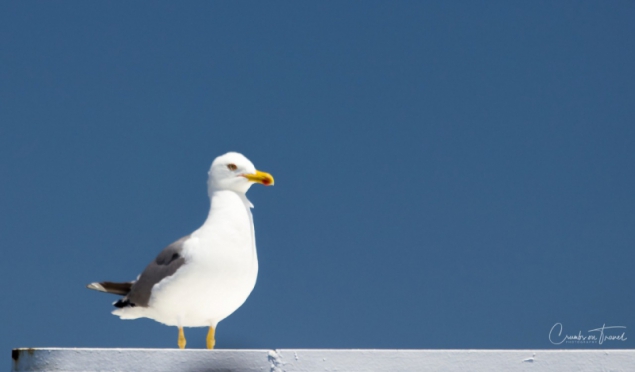 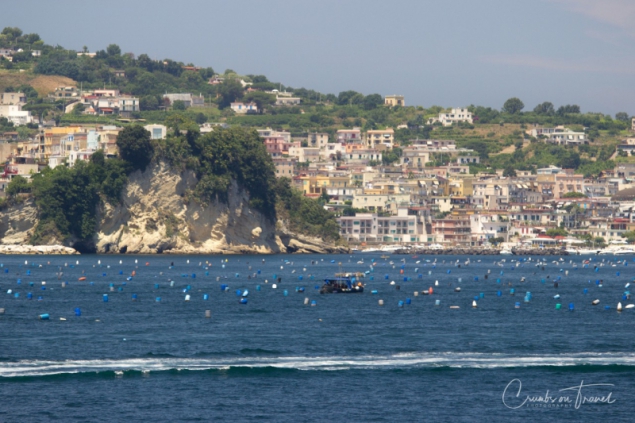 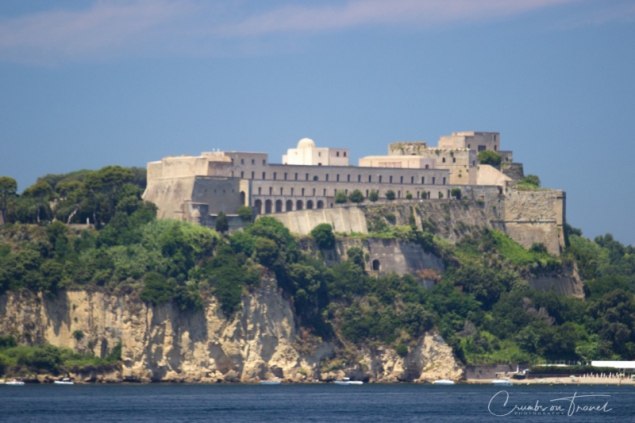 For further information:
For a perfect hotel to visit Ischia I recommend Villa Melodie

Ischia - The Place My Heart Belongs
At the Set of “The Talented Mr. Ripley”
A Night with Anna – the Sant'Anna Festival at Ischia Ponte
This entry was posted in Campania, Europe, Italy, ON TRAVEL and tagged ischia. Bookmark the permalink.