My Encounter with the Sandman of Travemünde 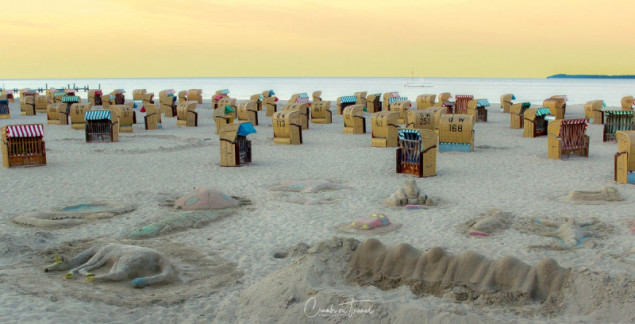 On one of these nice summer evenings I had an appointment with a friend for a shooting on the pier of Travemünde. On my walk on the boardwalk along the beach I saw some beautiful sand sculptures. I took a photo with the typical beach baskets one can see on the beaches along the Baltic Sea.

That moment a tanned man wigwagged me to come down and asked me if I could do some photos of the sculptures and send them to him. Of course I did what he asked and we started to talk shortly. The sculptures were done by children mainly and he wants to have some photos in memory of their bravery.

As I had the date with the friend of mine I asked him if he is there every day.

So I came back the day after with my camera to take some more photos and to talk a little bit with this guy. 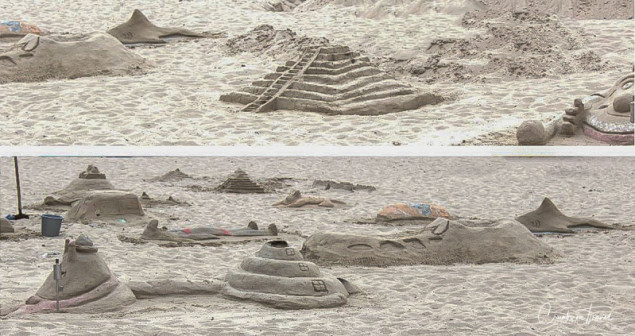 Some of these sculptures were his own, like the one on the following photo. I was amazed how much it’s possible to work accurate the sand – normally flowing away between fingers.

He told me, his name is Mario Bremer, he was born in Lübeck and has seen half the world and building on many beaches sand sculptures.

He had known years ago a famous sand carver in Spain. He helped him in his work and found out that this art is what he wanted to do. So he started to learn how to do it – because there is a great technique to built such big and really very accurate work. 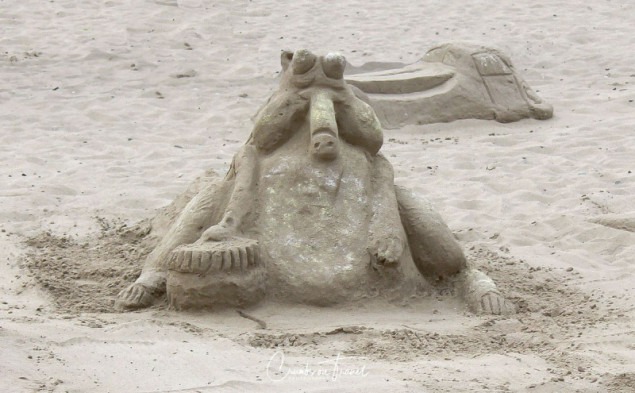 He was sitting in ‘his’ beach basket and telling me that every sand is great to work with. The sand in Travemünde is round corned. With four corned sand (Dutch sand) it is possible to do straight up figures witch is not possible with this one. Even with grit mixed with clay it is possible to do the sculptures. That one is called three corned. Also topsoil is workable. 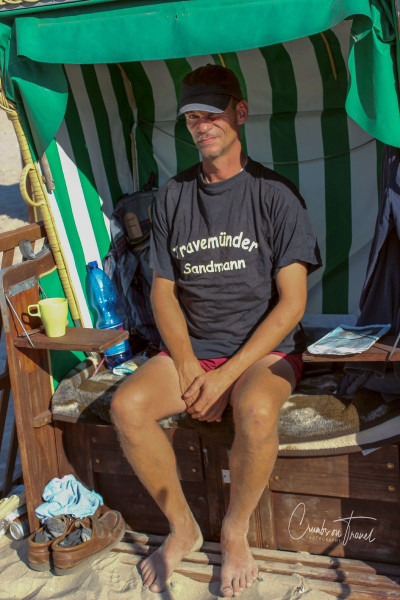 He has been on more than 350 beaches mainly in the Canaries, Spain and France. One challenge was the beach in Barcelona witch is very difficult for sand carving.

He is now coming to Travemünde about 17 years during the summer and always on the beach. He is sometimes sleeping in the beach basket to observe the work done by him and many children. With the sundown he puts torches near to the figures illuminating them and giving them a magic look.

I saw the eyes of the children learning with him. They have all a hand for creating and there is nearly no child who doesn’t like to learn to do create with sand. 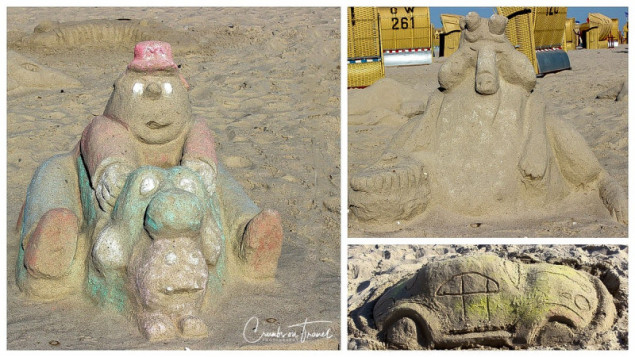 He is giving workshops. Often parents coming with there children and doing together a sculpture. Adults to shovel a sand hill, put water on it and to learn how to create their figure. Many bring a photo of something, a fluffy toy or have their ideas in the mind.

Mario starts to follow them step by step. Always helping, explaining the next step to do. Hours go by, an amazing figure is coming out. Like the light house… 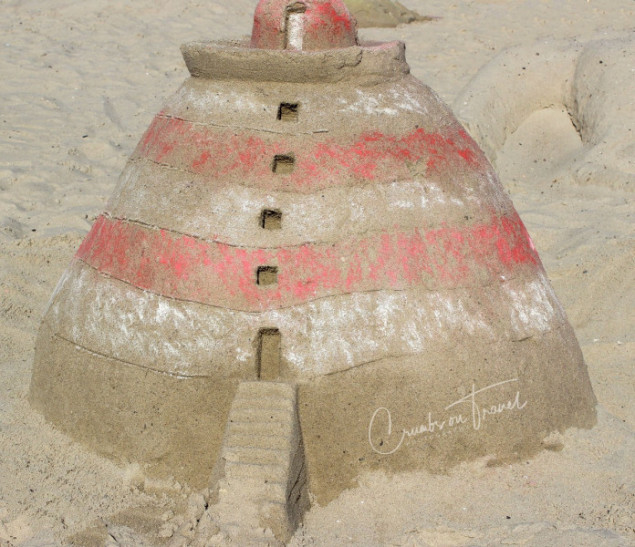 Two siblings built with lots of love two turtles with a baby turtle and eggs. Another did a shark swimming after a baby seal, mouth open. A small sign nearby with the word ‘help’ on it.

I was astonished how many ideas children have. And I saw them with so much commitment carving the sand, putting new water, working with a brush nuances, edges and rotundities. The last touch is sometimes a blush with color using chalk.

Mario’s own work is doing ‘The Last Supper’. He likes to work his figures a little more abstract. He wants to show what is in his mind but not in a photographic way, more rough.

When talking me about his ideas and showing me the big structure two little children were running over it and destroying one head he worked out in seven hours. Just gone! He was heart broken but could not say anything to them. He told me they are children, they don’t know better if parents don’t teach them. He will do it again. 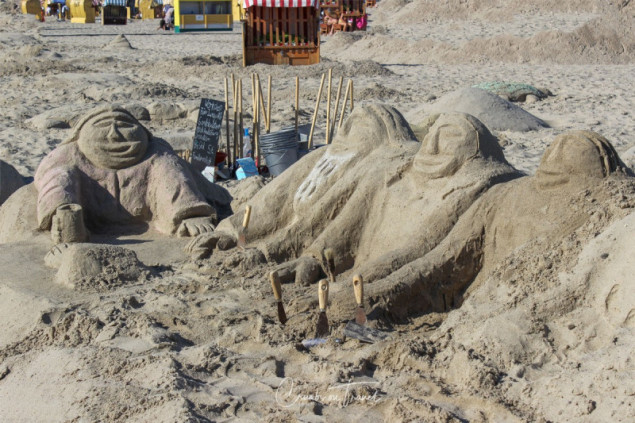 Mario is a very nice person, children love to be with him. They listen to him, he has a lot of patience and the most important thing: he loves his art and to teach it to everyone who likes to learn it. He worked with well known carvers around the world.

I don’t think he can do a good living with it but I saw his happiness with what he has. His dream is to go to Dubai and doing his sculptures on those great, endless beaches. For that he is looking for a sponsor. I hope very much he will find one. He is a great artist with a very big heart and a special charisma. He speaks German, English and Spanish. 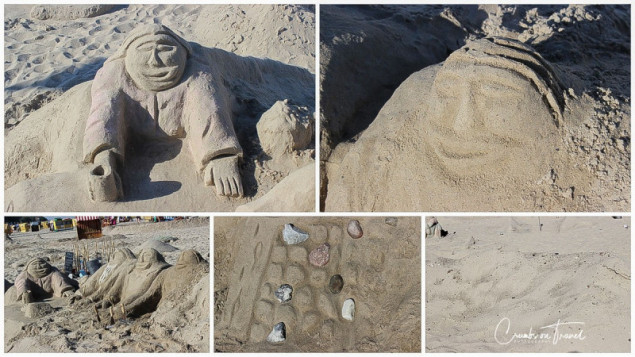 For further information:
Mr Sandmann on Facebook
in a local paper (in German)
For sponsorship just write to: mario.sandcarver.bremer@googlemail.com

A Cozy Cafeteria And Home Accessories
Halloween and Pumpkins in Travemünde
Pat-a-cake, Pat-a-cake, Baker's Man – Sand Sculptures in Travemünde
This entry was posted in Germany, ON TRAVEL, Schleswig-Holstein and tagged travemunde. Bookmark the permalink.