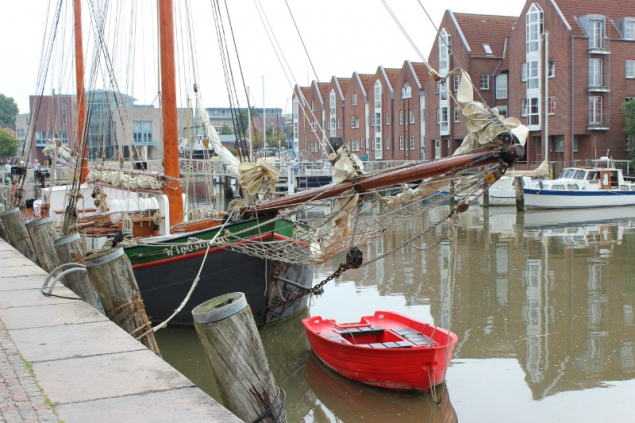 Alarm clock at 6.30 am, just a banana smoothie and then off to pick up my mother’s friend with whom I have already done some nice trips. This time the goal was the North Sea. I have been there once or twice as a child with the school and my mom told me once we’ve been on an island – I can’t remember which one – for a weekend as I was a very small child. But never as an adult and I wanted to see the mudflat, the famous Wattenmeer. Which is also a National Park.

The evening before I had a look about the way we could go and also if the tide is suitable for a short mudflat hiking. Unfortunately not at that time we would arrive there… 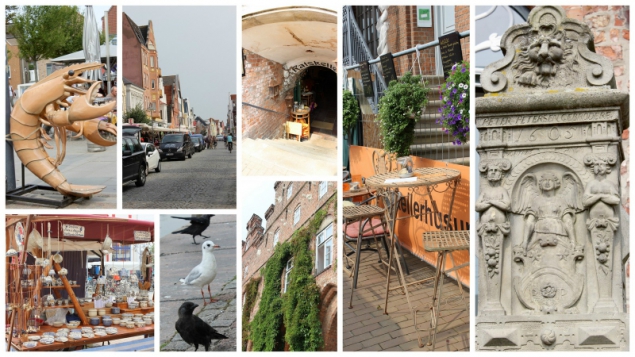 The day was not really sunny but weather was perfect to drive around. We took the road up to Kiel and Schleswig, had a short stop in a small village half-way between Schleswig and Husum where my friend new they have great and famous bread. I took some for a friend of mine with olives and feta cheese – it looked delicious and really special.

Around 10.30 am we arrived at Husum. Quickly we found a parking place in the center of the small city where from it was a short walk to the very center. We found a huge market with a lot of really good-looking veggies. As veggies are the potatoes famous from this place in case you look for something typical

A few words to Husum: The small fisher town was first mentioned in 1252 and destroyed many times by the tides. It is today mainly a tourist resort and is called the gate to the North Frisian islands like Sylt, Föhr, Amrum and Pellworm. As sights, it offers the church of Saint Mary, a castle (we haven’t seen) and an interesting town hall from 1601. Famous is Husum also for the ‘Schimmelreiter’ by Theodor Storm. 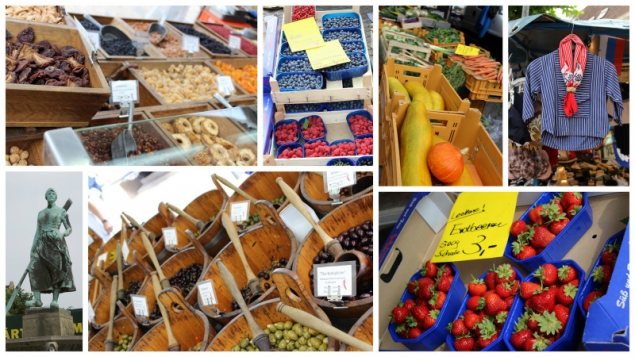 The farmers market is situated around the Saint Mary’s Church. Very simple as architecture and very nice inside. Different to many other Nordic churches with very often vivid colors, this one is held in white and gold. But simple and not ‘heavy’ at all. Very interesting is the baptismal font. 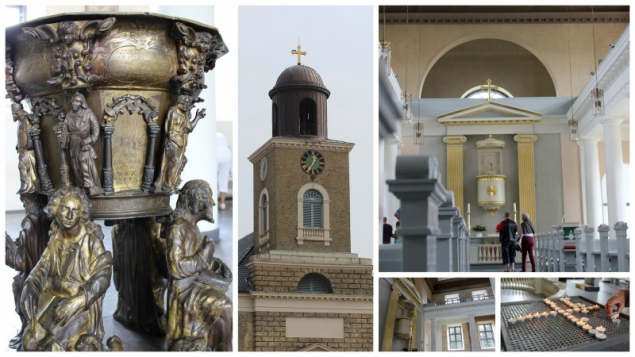 We walked away from the market and church towards the harbor which is nearby. We both didn’t like it too much and so we left Husum after less than two hours. But first we had a short picnic in the car and discussing where to go now. 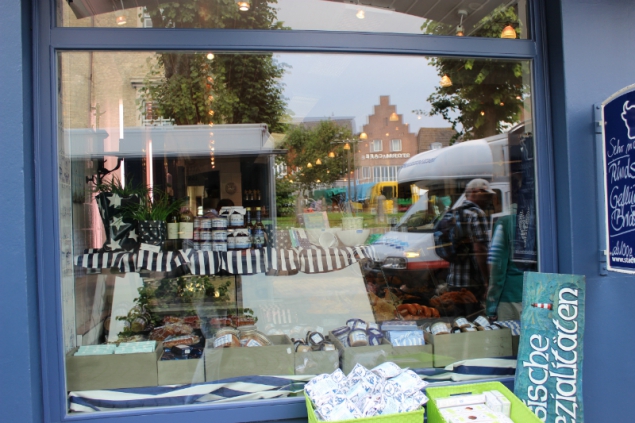 We opted for Tönning which is on the way to Brunsbüttel, all along the North Sea where the tide was high now and not mudflat hiking possible 🙁 Tönning was our next goal. 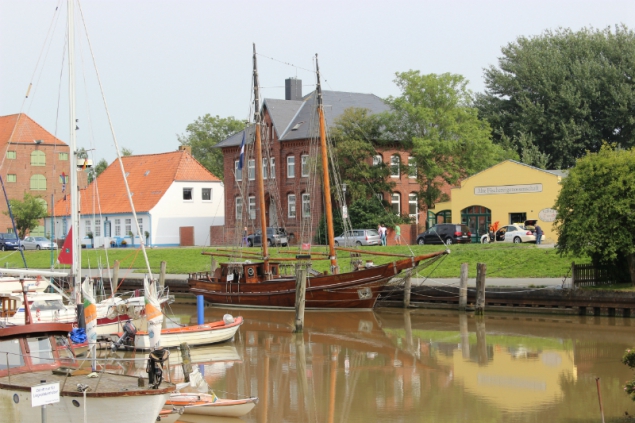 And this is a place we liked immediately! A cozy tiny harbor, with boats and sailing ships, little nice shops and restaurants, calm and all well done. Not the commercial feeling at all. The antique car we saw, was in the right place here, giving an even more typical touch to all. 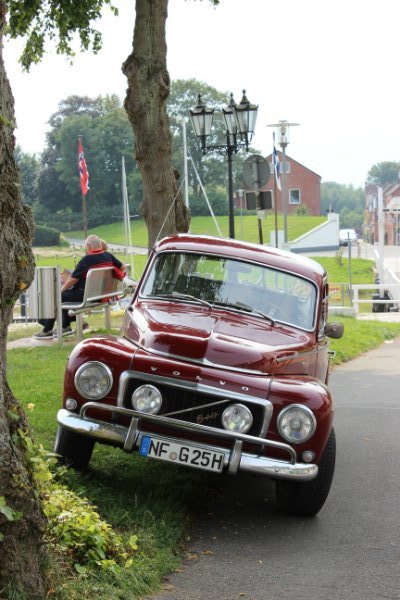 It is interesting to see a photo of the old harbor 60 years ago and nowadays. I think that not too much changed in this half century.

Tönning is situated at the mouth of river Eider. It was founded earlier than 1187 and already in 1583 a duke, Adolf von Schleswig-Holstein-Gottorf, built the Tönning castle. Today it doesn’t exist anymore. In the ‘Packhaus’ at the harbor during X-Mas time there is the longest X-Mas calendar of the worlds and a huge market. 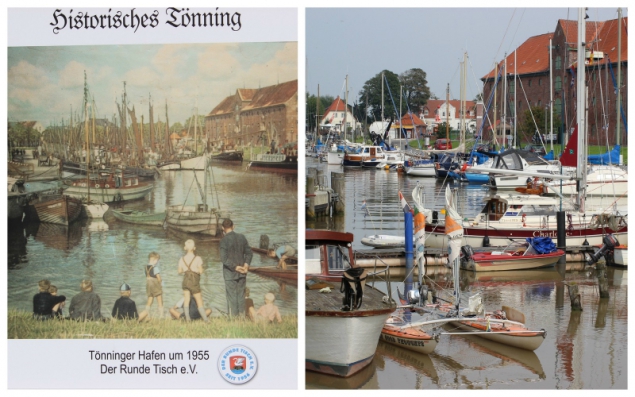 We had our afternoon cappuccino in one of the nice restaurants, sitting in the full sun at the harbor of Tönning. We enjoyed the stay much more here than in Husum before. It is a great place where to stay for lunch, having a typical shrimps sandwich or another fish meal or anything else. One restaurant had beach baskets to sit in – while having lunch. Great idea! 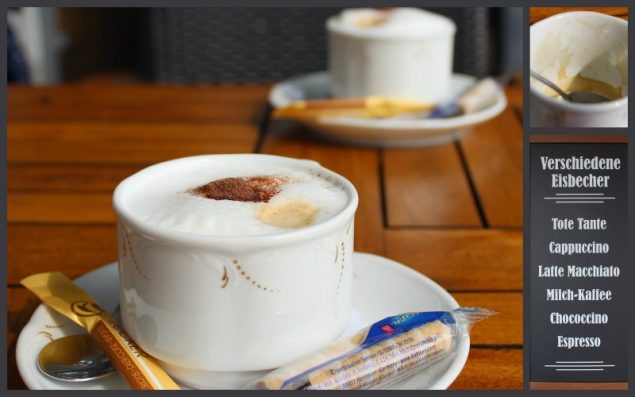 On our way to Brunsbüttel we passed a tiny place called Marne. We saw signs for the church of the place and so we stopped by to have a short look. This really huge Saint Mary-Magdalene’s church has again the colorful paintings inside at least at the ceilings. The vaults, the high windows, the brick architecture – it is a church not to miss!!!! 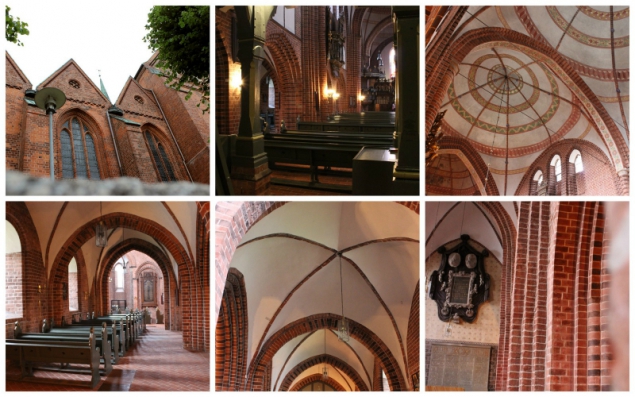 We took the road to the last goal: Brunsbüttel. Here we had a look at the huge lock through which all the cruisers, sailors, container ships and more have to pass when crossing the country Schleswig-Holstein from North Sea to Baltic Sea on the Nord-Ostsee-Canal.

Here we took another coffee and a long chat with the relatives of my friend and took the way home at 7 pm. Another two hours later we arrived me exhausted from 500 kilometers driving and full of new impressions. We liked our trip and it was a good idea to have a day trip to the other big seaside.

For a real good look it would be better to stay for two days in a small place like Husum and go up and down the coast to Sankt-Peter-Ording, Friedrichstadt and other nice places in Northern Friesland and Dithmarschen.

And last but not least: I found again some DOORS!!! And I would say some very nice ones! What do you think about them?

Soapbox Racing in the Stork Village Bergenhusen
This entry was posted in Germany, ON TRAVEL, Schleswig-Holstein and tagged husum. Bookmark the permalink.