Magic Abbey in the Fields – San Galgano in Tuscany 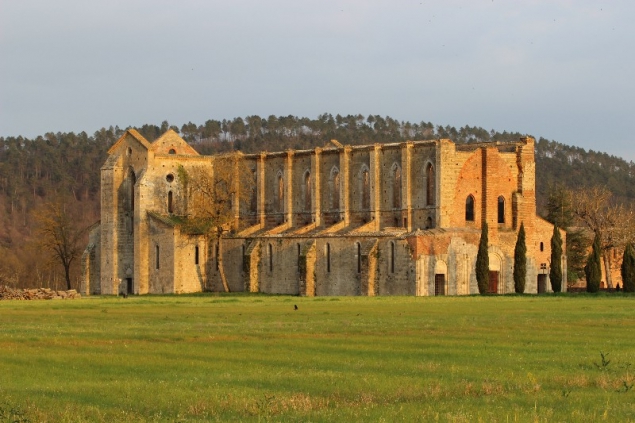 I love history and especially the period around the middle age. I have seen many Cistercian abbeys in Ireland and I still like to discover new ones. They are mystic and have a really amazing impact on me. This time I had the opportunity to see San Galgano, a Cistercian abbey near to Siena in Tuscany, Italy. 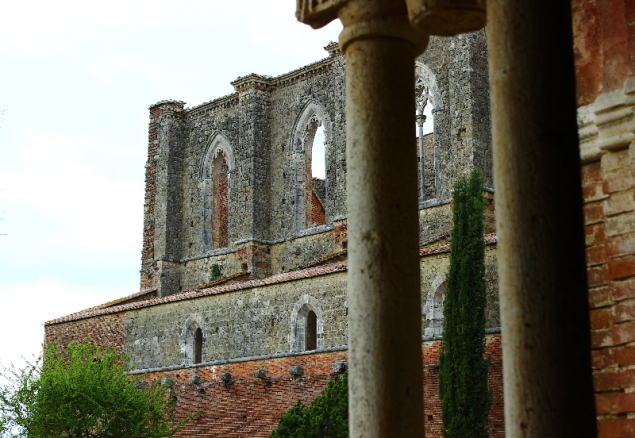 First a few words about San Galgano. The real name is Galgano Guidotti. He was born in Chiusdino, a nearby village, in 1148. He led a typical life for the medieval period. Going to war, living with arrogance and violence, taking what he wanted and not thinking about others.

Than one night appeared an archangel to him to ask to change his way of life and manners. So he left everything in favor of a pious hermitage on the hill of today Montesiepi. It was here that he took his sword and plunged it into a rock. The remaining visible handle and shaft form a cross and it was this where he prayed to.

For the church is was no great gesture at all. The church was in fully war of Crusades into the Holy Land and a knight signing out of his duty and becoming a religious person was not really helping.

San Galgano lived doing a lot of miracles as well, till he died on 30th November 1181 at an age of only 33 year on Mount Siepi.

The round church – also called Rotunda because of its round shape – near to the today abbey was built on his tomb and sword. Pilgrims arrived when Cistercian monks took over Monte Siepi and the following monks of San Galgano left to be Augustinian hermits. Only 9 years later he was canonized and 30 years later they started to built the abbey in the valley just at the foot of Mount Siepi. His feast is on 5th December. 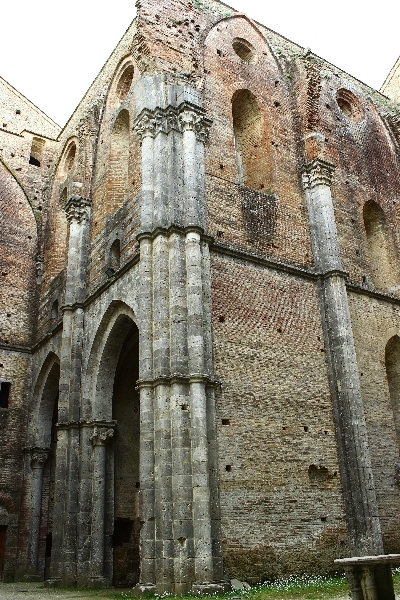 Because of his unique way to become a hermit and of his many miracles he did, a lot of pilgrims arrived after his death. The little chapel built on his tomb was not big enough anymore and so the decision for a bigger one was eminent. 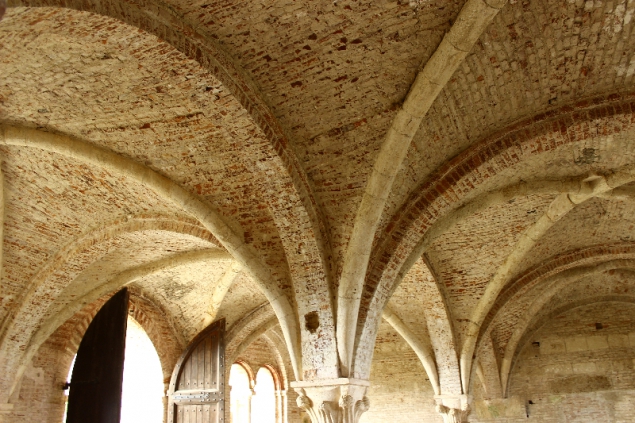 The abbey was built in the 13th century downhill the Montesiepi. Cistercian monks called by Hugh, bishop of Volterra, started to built this huge abbey in a perfect place for them as they only built in isolated locations. The church itself is not so different to other Romanesque churches but the real magic comes from its being roofless.

Already to see the church from the street is spectacular and impressive. Inside it is well preserved with wonderful details on columns and walls. The side aisles are so magic that never the less it’s easy to hear the monks going down this way. 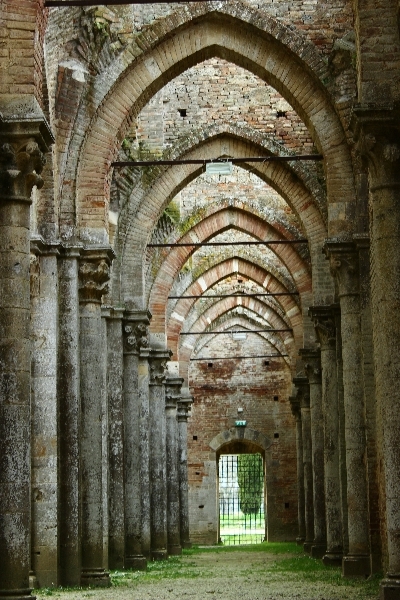 Monks lived here till nearly the end of the 18th century. But already during the plague of 1348 died a lot of monks leaving the abbey with only a few of them. So the abbey during the last centuries was in a bad shape not having enough hands to restore. In 1781 the roof completely fell apart and a lightning in January 1786 hit the 36 meters high bell tower. The churches end has arrived.

In the end of the last century the church was restored and opened to the public. Often in summer in the last years there are concerts like classic or pop. For sure a great event in this surroundings and with the church’s acoustic. 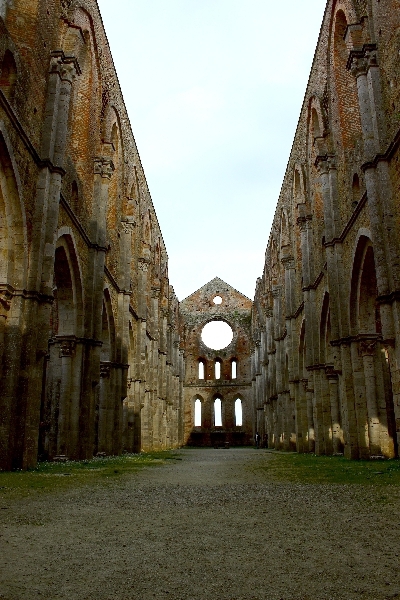 The magic of this place is the surrounding countryside. Fields and soft hills, typical for the south of Tuscany. It’s a relaxing place where one wants to stay for a while and wait that all tourists go away. That’s what I did. Sitting in the car I waited people disappearing and sun going down. The sunset gave the whole place an additional magic. The lights around and in the church on and I started to listen to the monks singing in the church. Well, it was in my mind but the situation is suggesting it easily. I didn’t enter again the church and I think that was a bad idea. Don’t miss that!

I recommend in any case to stay overnight or at least after sunset. The last sun rays and the spots later are so special you will never forget anymore!

Have anyone ever been there? Do you know that feeling when you have been to Cistercian abbeys in Ireland? I think the feeling is very similar and in any case a ‘must’ do’.

Photos of San Galgano in Tuscany
The Truth about King Arthur
This entry was posted in Europe, Italy, ON TRAVEL, Tuscany and tagged san galgano. Bookmark the permalink.