Madaba and the Mosaics 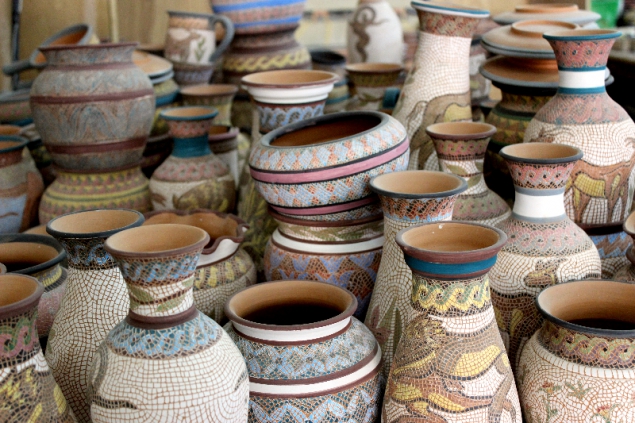 Madaba is famous for two things: the Byzantine and Umayyad mosaics and the hot springs. The springs we would skip but I was mainly curious about the map of Madaba. And so we entered on a hot morning the City of Mosaics. 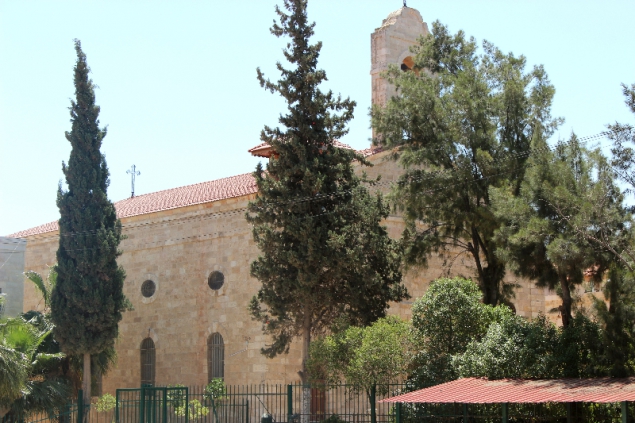 First we had a visit in the church. Not for praying but for seeing the famous map. The church in the center of the city is the Saint George Greek Orthodox Basilica. A small church with a school for infants and a Kindergarten nearby. Here we would see immediately the map of the Middle East.

This beautiful mosaic was discovered by F. Giuseppe Manfredi in 1896. The map is dated at the 6th century and is an index map of the region. Two million pieces of colored stone show one of the most amazing designs I have ever seen from such an early time.

Unfortunately it was nearly impossible to take a really good photograph as it was enclosed and I am not tall enough to get a pic from above.

The mosaic depicts the landscape of the Holy Land and Jerusalem as well with its Nea Church from 542 AD. Interesting that no buildings after 570 are seen on the map so it has been created before this date. No artists are known of this masterpiece but it was for sure a work for the Christian community of Madaba (Arab Christians) as there was a bishop at that period in town. 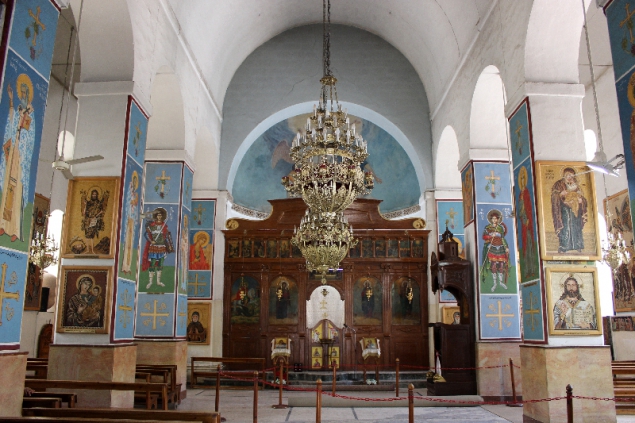 It seems that some figures of the map are removed in the 8th century by the Umayyad rulers, just before the earthquake in 846 which destroyed nearly the whole city.

Abandoned subsequently the church was rediscovered in 1884 and a new church built on the place of the old and destroyed one. Unfortunately during this period the mosaic suffered fires, people without care and moisture effects. Germans paid money for conservation in 1964. 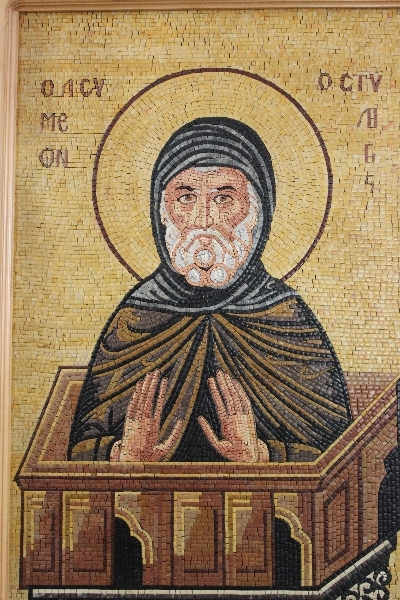 The small church itself is also worth to have a look around. It has other mosaics at the walls and is decorated with colorful on the columns. The wooden altar is amazing.

On the right of the altar there is a small entrance to a chamber with a lot of icons – worth to see as well!.

We missed seeing the Archaeological Park where we would have seen additional mosaics. If you are by your own go and have a look. It completes what you have seen before and gives a better understanding of this amazing works. 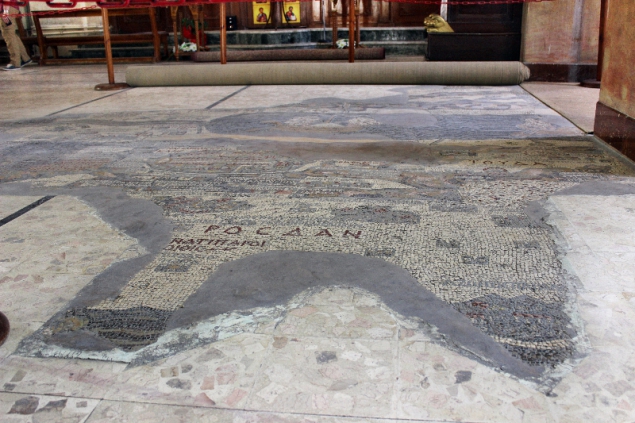 After the visit of the Saint George Basilica, we’ve gone to a mosaic school. It is one of three in the world were to get also a diploma: Madaba in Jordan, Tunis in Tunisia and Sorrento in Italy.

This school is particular as it gives a chance as well to handicap people to learn a work. The Institute of Mosaic Art and Restoration was created in 1992, funded by the Italian Government and today also from the Jordanian. One can learn the art of mosaic, CAD, geology, chemistry, English and Arabic within two years and take in additional two years the BA in Archaeology at the Yamouk University. 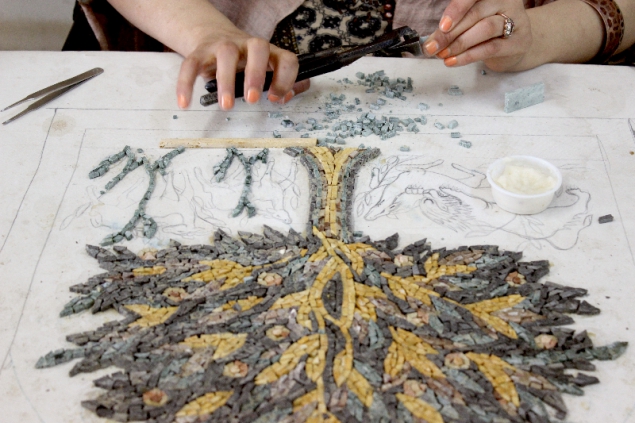 We had the possibility to have a look while young women worked on their pieces. From the cutting the stones into small pieces to glue them on a ground of tissue or plastic to the polish. Very interesting also the way the make look vases like mosaics. Beautiful!

I was fascinated instead of glass works. They make glass out of the sand of Petra. The glass is so light that it seems air. I was hooked up with this yellow vase but decided in the end for a smaller version in greenish glass. In the showroom there was an infinity of choices. 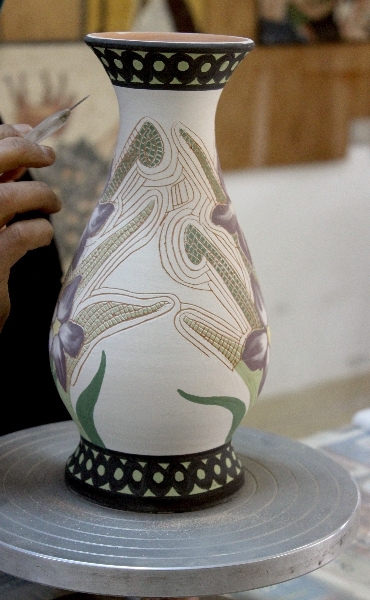 I was particular touched by the hard work of the mosaic workers. It seems they sit there and put small pieces together like a jigsaw. But it is definitely a long process of many days to finish one picture. By the way: the most depicted one is the Tree of Life.

Have you ever seen mosaics somewhere? Did you like them? Would you like to have for example a mosaic table at home for the Mediterranean feeling? 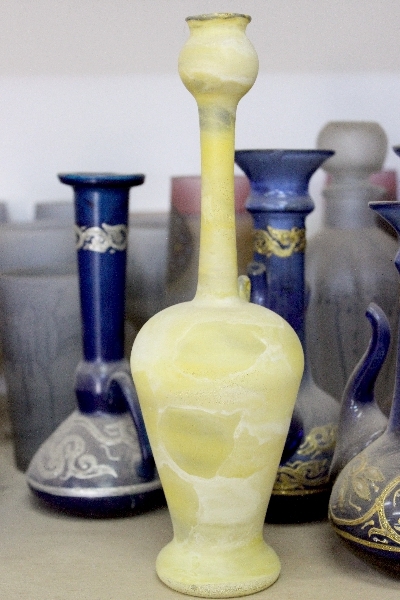 Floating Sea – the Death Sea
Walking Through the Hadrian's Gate in Gerasa
Sweet Jordan - a Stop in a Pastry Shop of Amman
This entry was posted in Jordan, Middle East, ON TRAVEL and tagged Jordan. Bookmark the permalink.