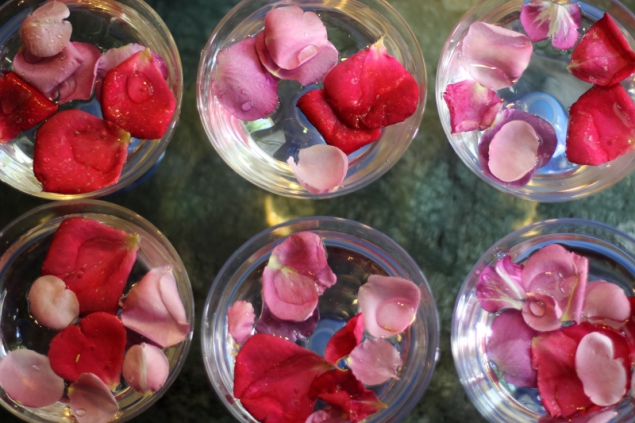 It is well known that our ancestors had already great medicine schools and physicians. It started before the Egyptians but here medicine started to be more talked and professional. Simply they had specialized physicians where every physician cured only one kind of disease and they had already a good working public health system. And I am talking about 5.000 years ago! Imhotep in the 3rd dynasty wrote the first ancient textbook on surgery, the today called Edwin Smith Papyrus.

Hospitals, already established, were called Houses of Life and the first well known physician was Hesy-Ra, working in the 27th century BC. And here it becomes interesting again: Peseshet was the first female physician (of which there is something written) practicing around 4.500 years ago. She had an supervisory role and trained midwifes at a medical school in Sais, Lower Egypt.

But the very first most notable early female physician is Merit Ptah. She is the first named woman in all of science 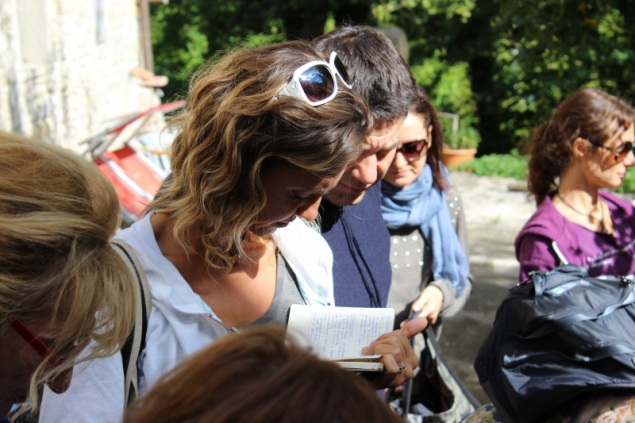 Agamede lived in the 12th century BC and was one of the first Greek female physicians known with healing power of all plants. And Agnodike was the first physician, gynecologist and midwife practicing legally in Athens in the 4th century. She learnt medicine in Egypt where women had an important role in the medicine. She was the one to change the law in Athens – and whole Greece – that females could be cured as well by female physicians.

Aspasia lived in the first century CE, as well Greek and worked in gynecology and obstetrics. She developed the technique for moving a breech baby.

The only known Roman female physician I found is Aemilia who lived in the 2nd century BC. 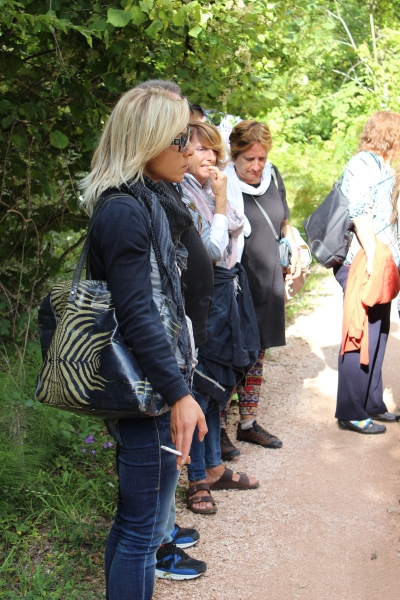 Trocta of Salerno is often wrongly confused with Trotula which is a group of three texts on women’s medicine written in the 12th century in the same city Trocta or Trota was practicing. She was a scholar of the Western world’s first medical school where men and women could learn about medicine. Scripts from all over the known world were translated in the library of Montecassino (between Rome and Naples) and practiced in Salerno. The school was founded in the 9th century.

About her life there is nearly nothing to find. But her fame was all of the today Italy to France and England. She is recognized in many texts like “Practica secundum Trotam”. This covers female medicine as well as snake bites and cosmetics. The text was only rediscovered in 1985 in Madrid.

In the Trotula-ensemble she is the one author of “De curis mulierum”. These texts are not written by herself but talk about her treatments and cures and as a well known medical practitioner. The Trotula-ensemble maybe was not written for the followers in Salerno but more for an audience in England or anyway outside Salerno. 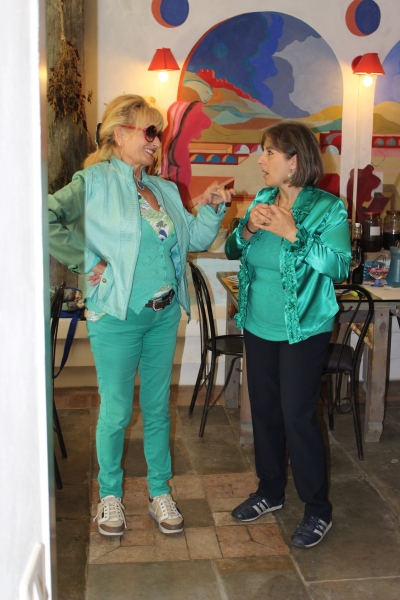 Another well known physician was Hildegard of Bingen. She lived around the same time in Germany and was also writer, philosopher, composer, abbess of a Benedictine abbey, a visionary and polymath.

She entered in convent as a young girl of 14. She had visions from an early age and was influenced by many persons teaching her music, writing and reading and many other arts. Later she was often sick, in part paralyzed for a short time and suffered a long time under her visions. In 1141 she started to write down all she knew and learnt during her life. In her works are several books of visionary theology, musical compositions (Ordu Vitutum), more than 400 letters to popes, abbesses, abbots and emperors and many salmons she preached, works on hagiography and she invented the lingua ignota. The most interesting one for this event today were the two books of natural medicine and cures. 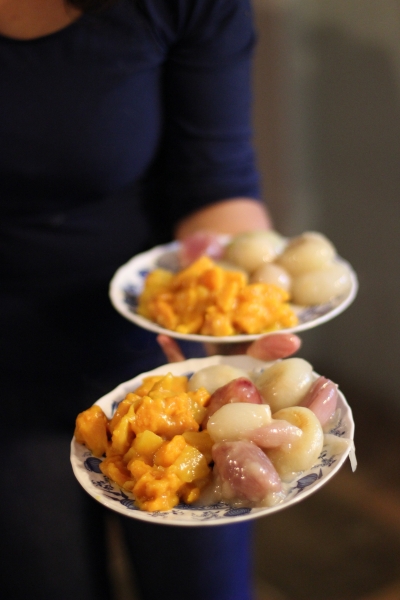 Her healing ways were by using tinctures, herbs and precious stones but combined with theological notion. Her books are called “Physica” (nine books about medicinal and scientific properties of herbs, plants, stones and animals) and “Causae et curae” (talking about the origin of diseases and their cures).

And this September I had the possibility to know more about these two great medieval physicians at an event at the b&b ValdericArte in the region Le Marche in Italy. 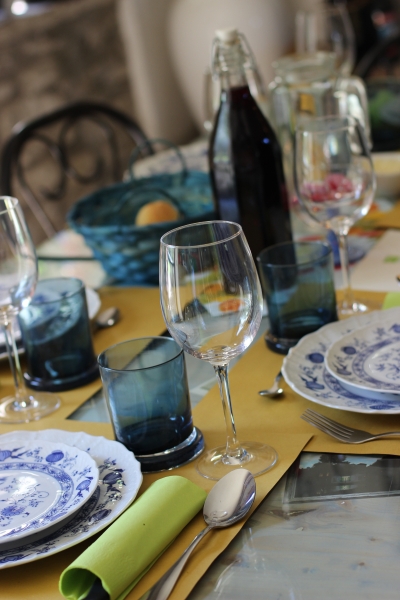 The event at ValdericArte had its beginning at lunch-time. People coming in, more and more, some I had seen already before at another event but most of them were newbies. Over 30 people found place in the garden and chatting and relaxing in the sun. Later we took place inside at the five finely set tables. We already were a huge family! 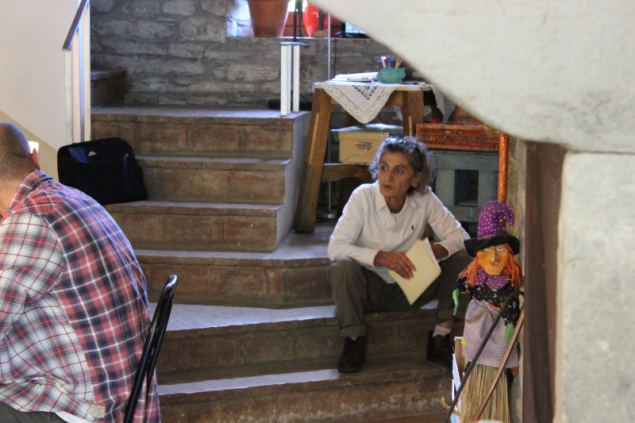 During our lunch – which started around one pm – the well known Loretta Stella – a ‘witch’ of herbs living in the nearby mountains as a hermit – was sitting on the stairs and talking and reading about Hildegard of Bingen and Trocta of Salerno. And explaining exactly what these two medieval physicians were thinking about the special ingredients we had for our lunch.

The farro for example was in their believe to calm down the humors of the body. Others were more for getting active the digestion and others to calm the nerves. It was super interesting and the lunch was not only super delicious but also a lesson on what we eat and the way every ingredient helps the body in its function. 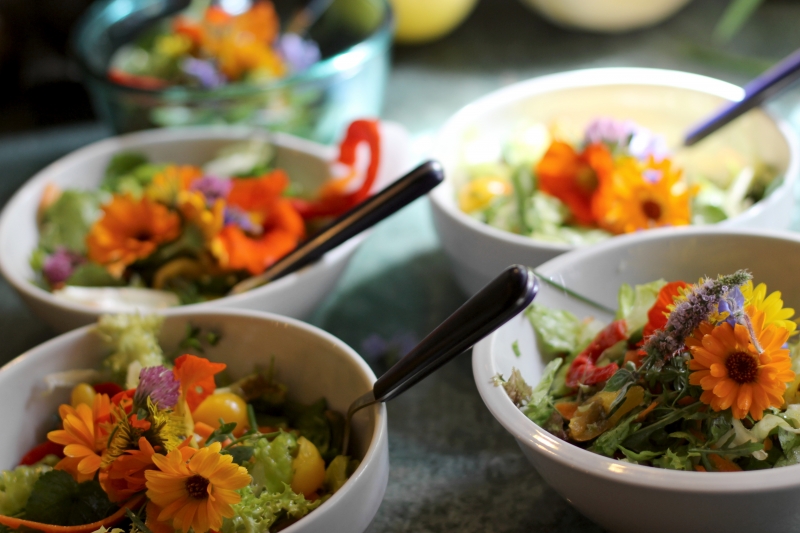 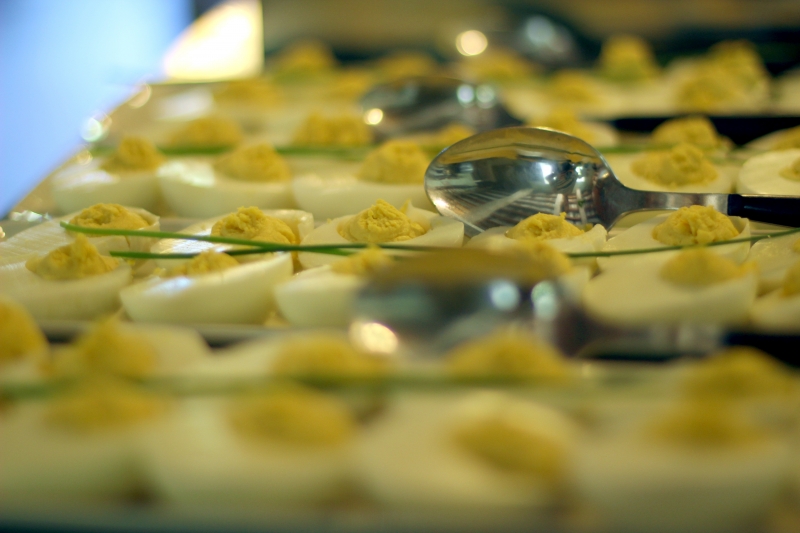 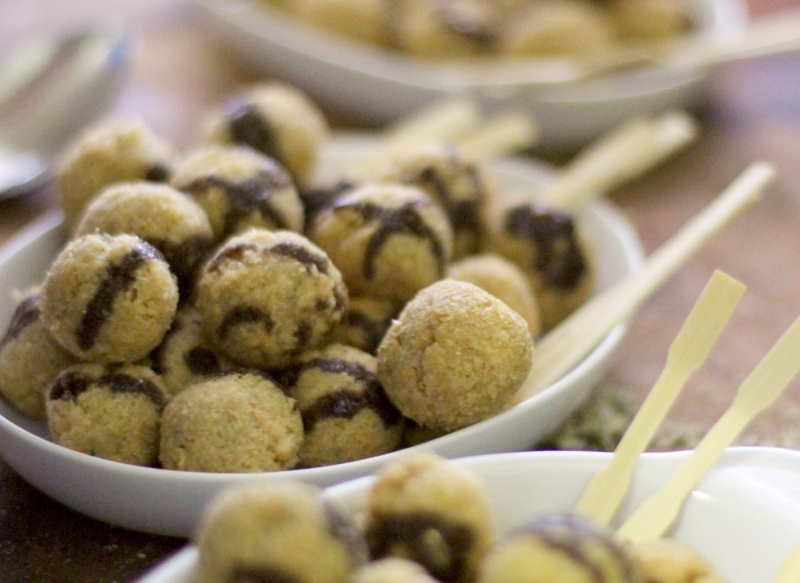 After lunch we started to go out into the huge garden, first to take some air and sun but then slowly to start our walking lessons with Loretta. She stopped every few meters or even centimeters to show us the herbs we were eating before.

She explained the reactions, when and which part to collect and how to conserve. Many of our followers were writing down notes on booklets and taking photos with mobiles. 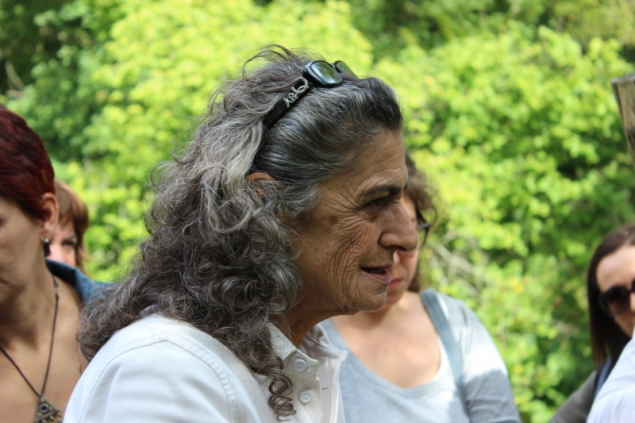 We walked around in the mountains nearby, asking questions as well and taking this little great woman always away from her original theme. So in the end we had a longer walk and so much more information.

She told us as well that the medicine in ancient times sometimes were different from region to region due to the plants growing in nature. So they didn’t use the same herbs and plants in Germany (Hildegard) like in Italy (Trocta). And the ancient Arabic medicine was even more different as it was much more far away and often had very different plants – but with the same properties. 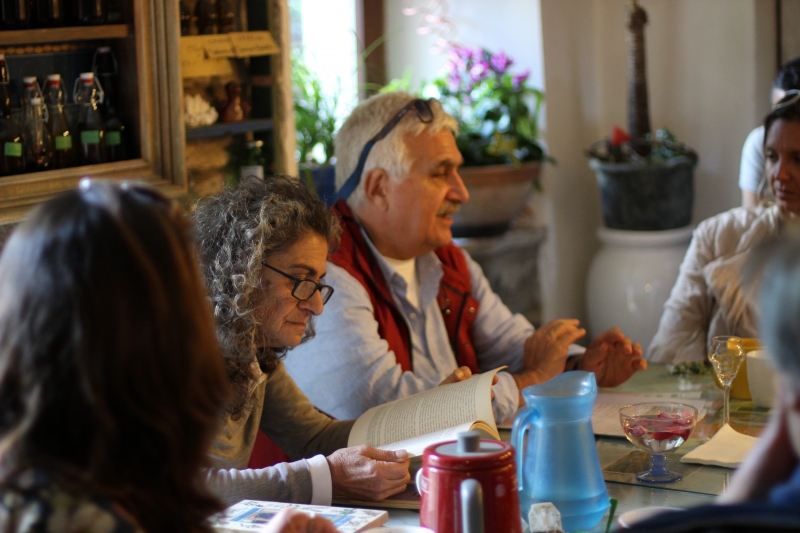 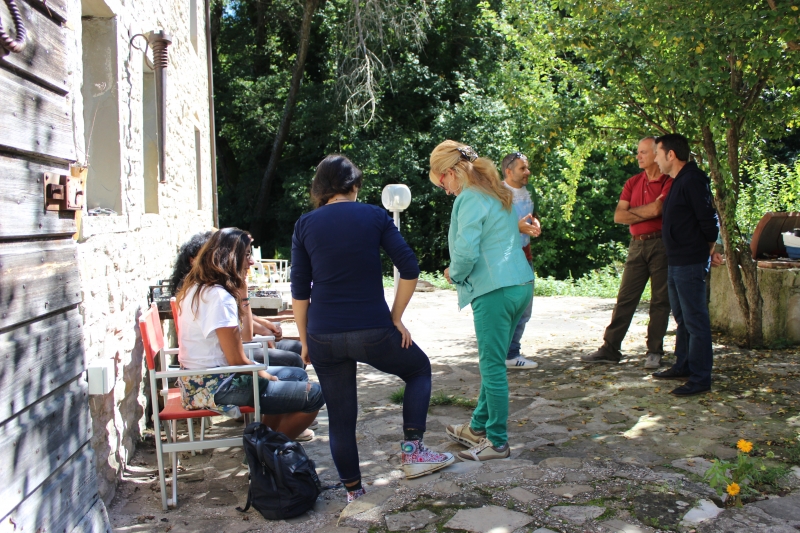 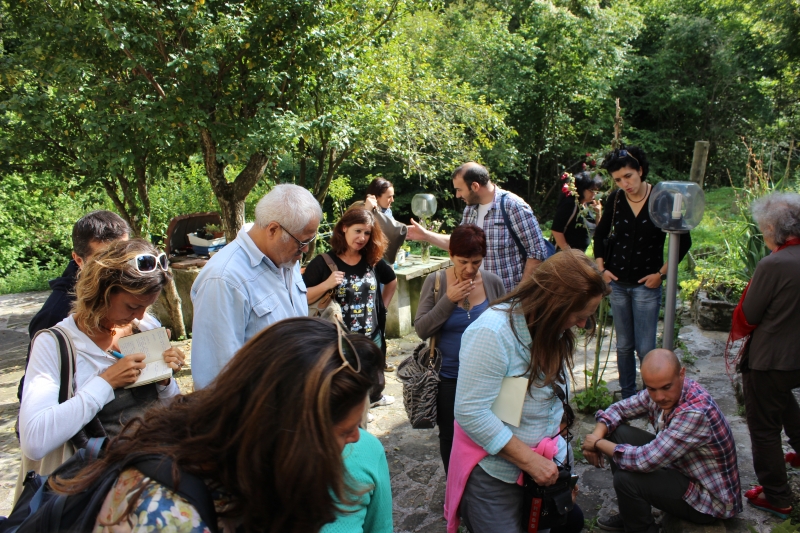 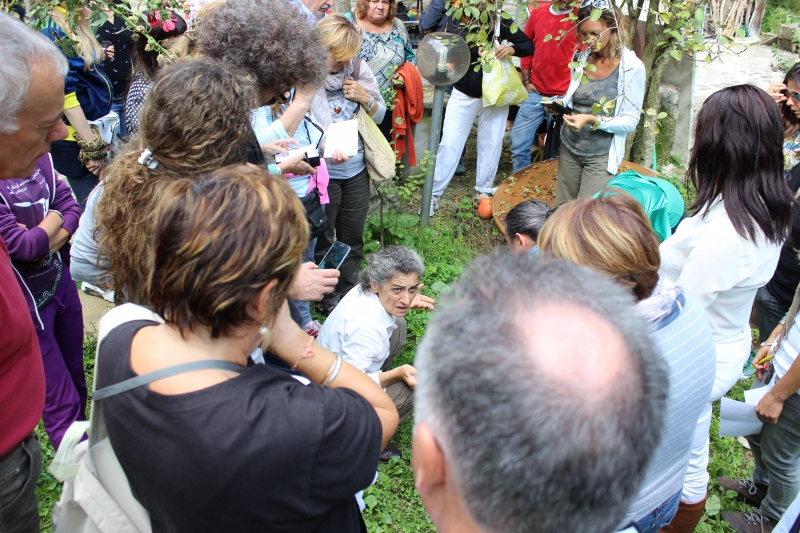 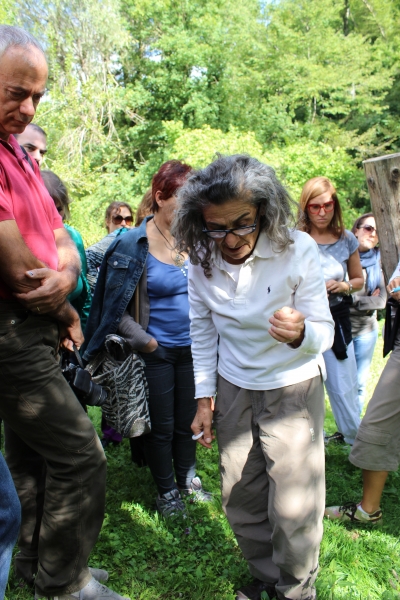 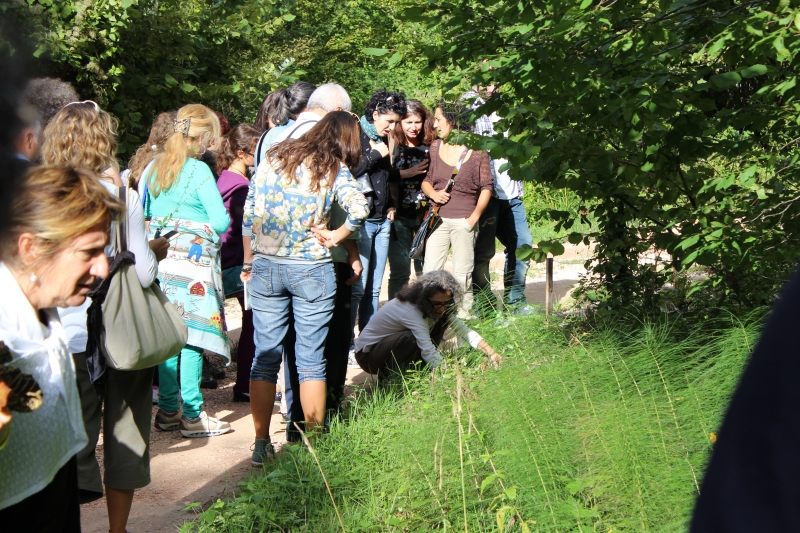 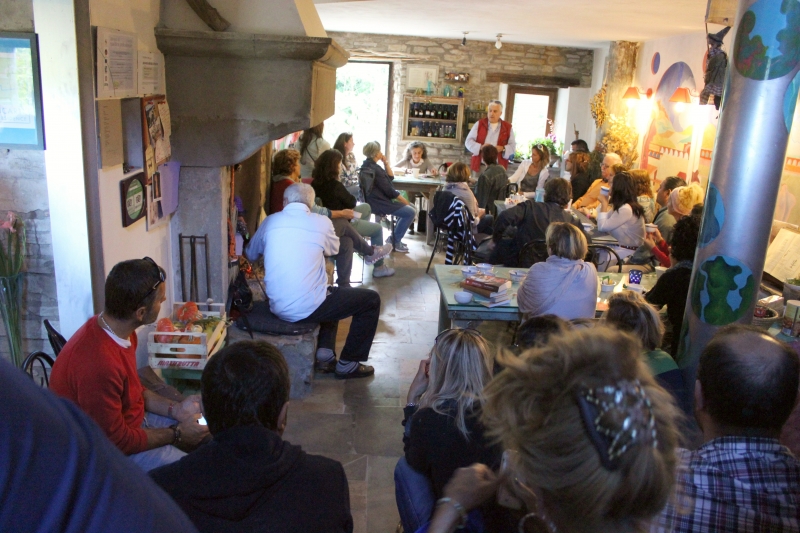 Later we returned to the house and sat all down again in the hall where before we had our lunch. As we were so many more than at lunchtime (some people came just to hear Loretta Stella) we sat on the stairs as well. We had a nice hot tea (it was a little chilly outside despite the sun) and a physician curing in natural ways and mainly with herbs talked about his own personal experiences and of course about how important the work of these ancient physicians is still today. That most of the medicine is still based on the experiences that they have made thousands of years ago.

In the early evening just right before sunset people started to go. We had a lot of discussions, who knows one thing, who another, seeking for confirmation, seeking for consult.

I never thought before how important these female physicians were and how late it started to be forbidden for women to cure. They were in most of the cultures very popular and only few cultures and often only in the last centuries they were excluded from universities and doing their work – as they often learnt from their own mothers the work and practice as well. 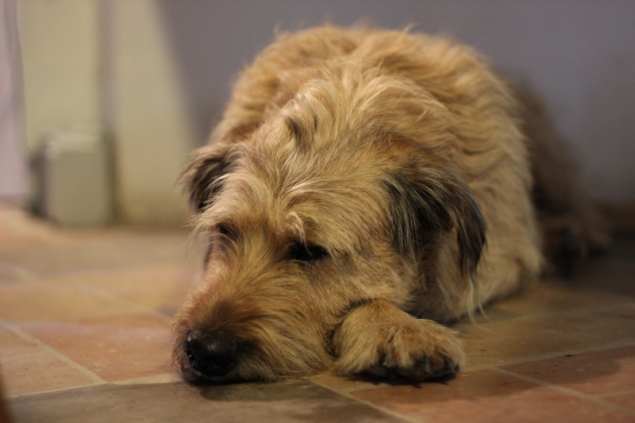 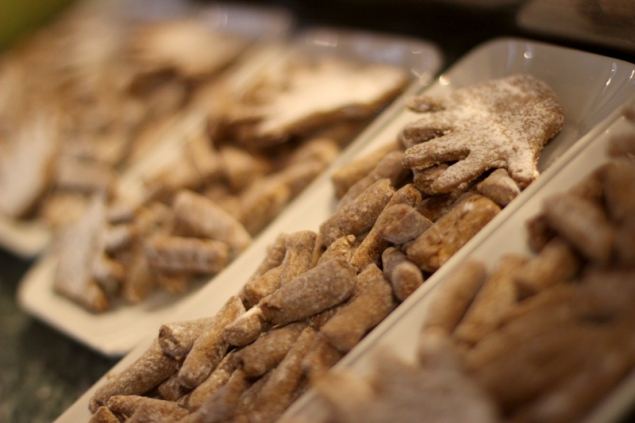 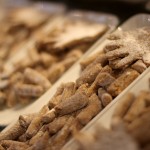 These cookies are delicious but NOT paleo. To make them paleo try with almond flour or buckwheat should be also great. Who uses rice flour - it will be perfect as well or an all-purpose paleo flour.