Halloween and Pumpkins in Travemünde 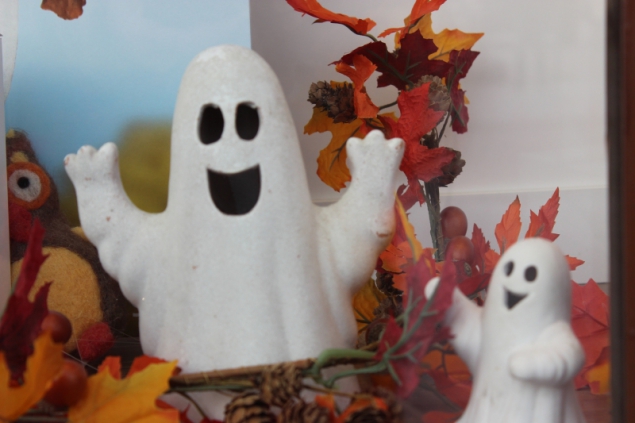 Halloween now in Europe and Germany is famous as in Ireland and the United States. So it is natural that also in Travemünde there would be a little celebration around pumpkins and ghosts.

A friend of mine was asked to take some photos of the event in the afternoon and so I decided to go with her and have a look as well. 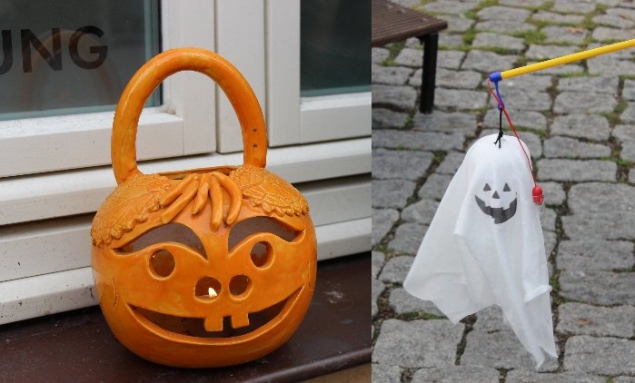 Halloween is an old celebration the night before All Saints (1st November). The word comes from the Scottish term “all Hallows eve”, involved by the time in Halloween. It is an old Christian feast and dated 1745. But it is based on the old Samhain that was celebrated around 31 October – 1st November in Celtic countries. It was the end of the summer, the beginning of the darker season and a celebration after harvest. There were offerings of food and drinks, part of the crop. 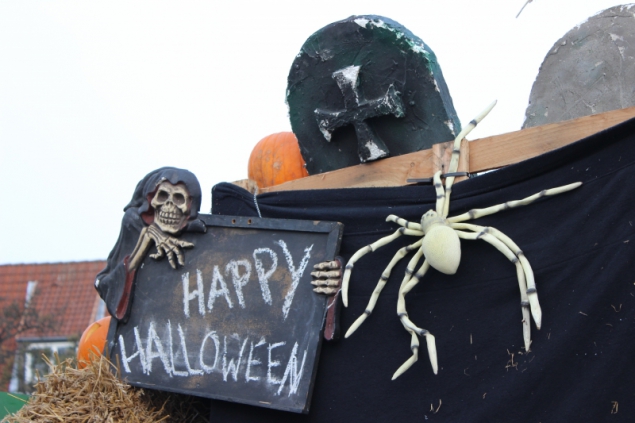 Like in many cultures it was believed that the souls of the dead would return for just one night and the offerings were for them so they can eat and drink. Candles were lit and prayers done, the table prepared for them, the open fire giving warmth to the relatives coming for one night back home. The famous bonfire is symbol of the sun that gives warmth and light, holding back the dark, cold season. 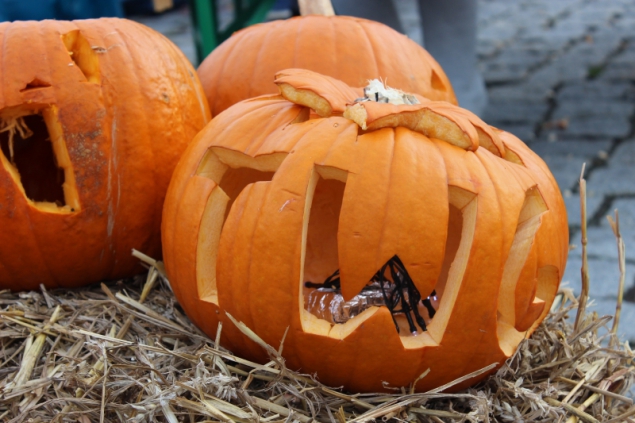 The tradition of ‘trick or treat’ has also an old root. A man dressed as a Làir Bhàn – white mare – let youngsters from house to house to recite verses to get some food. Food giving brings fortune, no food could bring misfortune. Costumes were for imitating the death. The real reason seems not to be known. But it’s only in the last century that it came a ‘habit’ for young people to mask like zombies, ghosts and ugly faces. 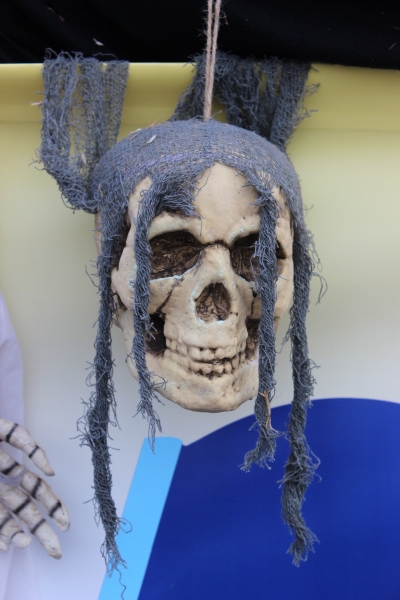 All Hallow was celebrated once mid May and switched on the Samhain feast only in 839 for several reasons. Celtic influence (I think for satisfying and renaming a Pagan feast (Samhain) into a Christian) was maybe the main reason. Today in many countries it is more a feast for children, and there are games and activities mainly for them. Masking for children is a great fun and the trick-or-treat story often not really fun for households. Children are today sometimes disrespectful and the trick is not that funny for the house-owner. For treats normally there are given small sweets. 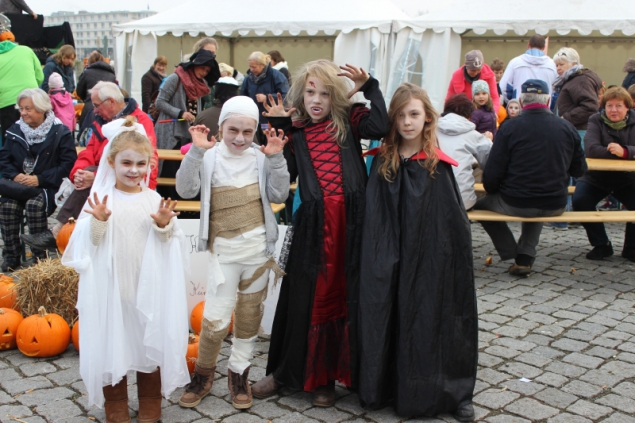 We arrived in the early afternoon at the main place of Travemünde in the center of the town. A few stands offered hot spiced wine, pumpkin soup and fish rolls – a typical food for this area. A lot of pumpkins were laughing’ at us as children were cutting masks and figures out of them. Children and adults were dressed as monsters, mummies, witches, ghosts and similar. 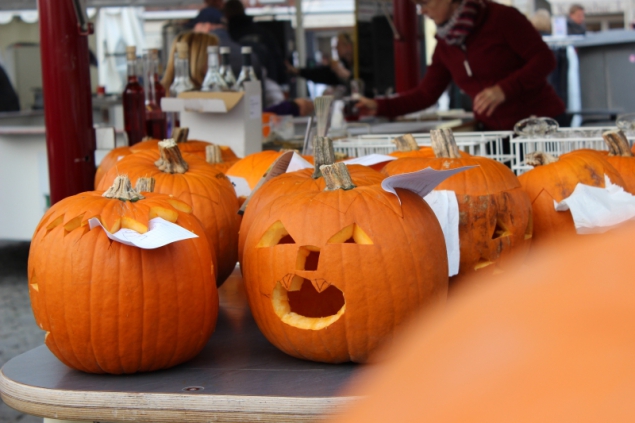 It took a little time before something happened and the tractor came. A band standing on it playing life music and a police car in front of it. A lantern procession would start. I was surprised how many people came to participate. It was an extremely long row going around the town, children holding ghost and pumpkin lanterns, mothers and fathers dressed up as well. In the end there would have been a small fire work for the ending I didn’t wait for. 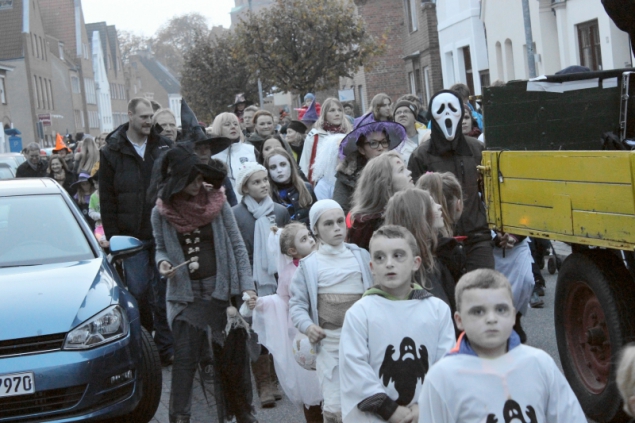 This made me think a lot of how sometimes holy celebrations change in the time and from the holy feeling there is nothing anymore. Especially in Europe and the United States now it’s a huge commercial celebration and the original sense of it nearly unknown. In Celtic countries and others instead it’s still the same meaning and oftentimes celebrated in the old ways as well. Do you like Halloween? And did you know the original meaning? Let me know in a comment below. 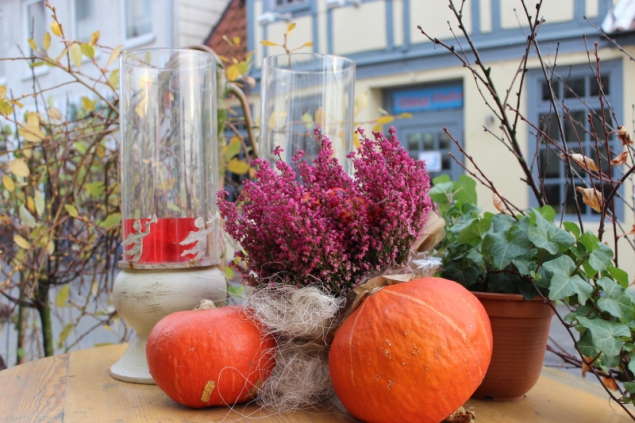 Sailing with the “Mare Frisium”
A Cozy Cafeteria And Home Accessories
Travemünde Strandbahnhof - A Jewel of History
This entry was posted in Europe, events, Germany, ON TRAVEL, Schleswig-Holstein and tagged travemunde. Bookmark the permalink.

2 Responses to Halloween and Pumpkins in Travemünde