Face Behind a Face – Venetian Masks 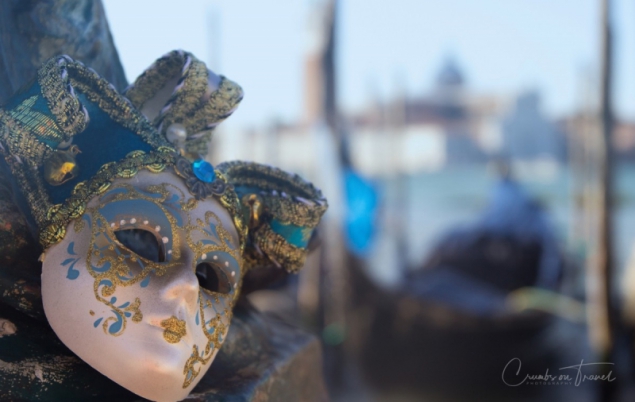 Venice is famous for being the city of love, for its many bridges, for the incredible amount of pigeons in the San Marco Place and the Serenissima. But also for the masks. And I saw countless masks of all seizes, forms, colors and materials.

Masks are used since antiquity for two purposes: for protection and for ceremonial events. You wear a mask normally on your face, covering it partially or completely but some are also covering shoulders, more to hold a big and heavy mask. 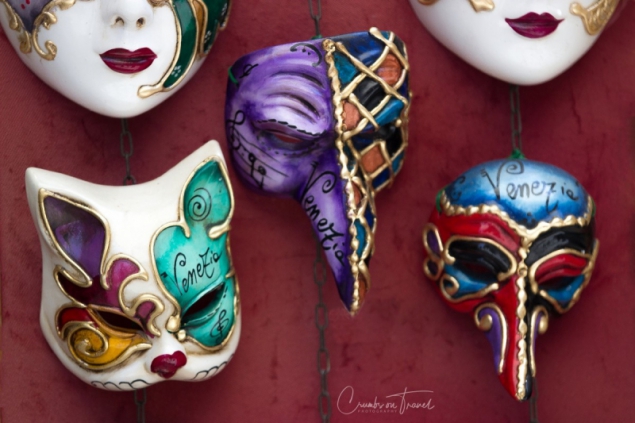 Historically it is not sure when the first mask appeared but the oldest ever found mask is 9.000 years! There are drawings in paleolithic caves with people wearing a mask, so I guess they are older than that at least. As masks for sure were initially made of materials that deteriorate quickly or maybe they were also thrown into the fire after the ceremony they didn’t survive until today. During the time nearly all cultures have used masks for different purpose.

Masks are great in performances as they can give a different appearance of the one who is wearing the mask and give a better idea of whom the wearer is performing.

In rituals masks have a higher meaning. They show characters like gods or spirits, feelings and are used in all continents.

Functional masks are often for medical purpose to protect, like also in sports.

A special section maybe are the punitive masks of the Medieval Ages. Or to show people the stupidity of a person, or to make suffer someone with an iron mask for example. Also death or burial masks are special as they are put over the face after death and often show the face like it was when the person was alive.

And then there are the masks for Carnival, like the Venetian Carnival. 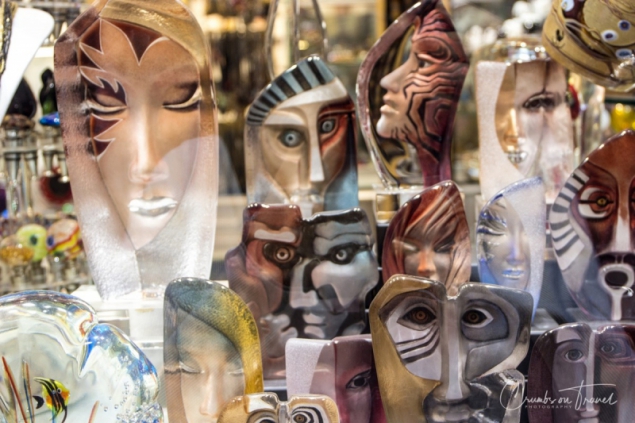 Carnival in Venice is being held since 1162. It usually starts in February and end on Shrove Tuesday. At that time, the Carnival was a several weeks long event where the whole city was celebrating with music, food, dances and more. The masks were used to hide the identity and the status so everyone could do what pleased him/her without a class restriction. It was used to distract people and folk a little bit from the strong power play during the rest of the year. Very much like in the old Roman times.

In the 18th century the Carnival of Venice became famous in whole Europe, times of Casanova for example. It abruptly ended with the French and then Austrian occupation when masks weren’t allowed. It survived in a certain way more in the private life until 1979 when it was fully restored. 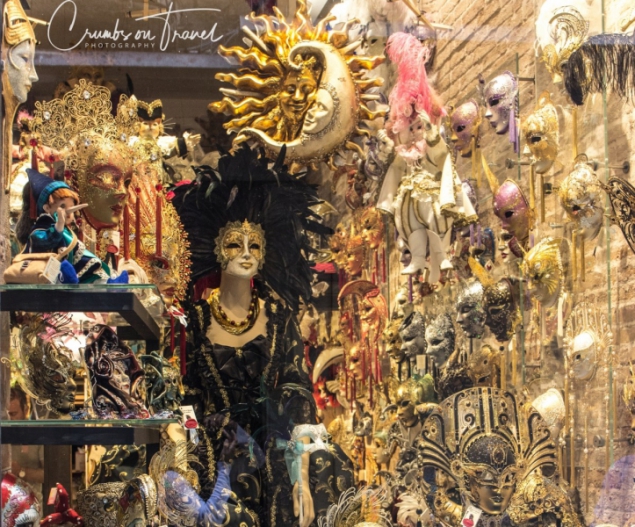 Masks in Venice have always played a special role. They were allowed long times during the year: from the 5th of October until Christmas and then from 26th of December until Shrove Tuesday. For hundreds of years there are mask maker guilds. Still, today they prepare masks made of leather, porcelain, gesso or even papier-maché. They are hand-painted and decorated with feathers and gems. Of course, there are also the factory-made masks for the mass of tourists to buy. When you buy one, try to buy a good, handmade and valuable mask. You can clearly see the difference (not only in the price). 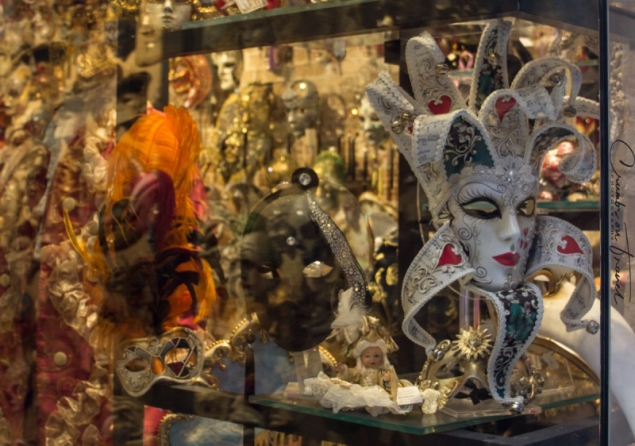 There are 7 different kinds of masks:
1. The Bauta: it’s a square mask with eyes and nose, but no mouth. It’s a male mask, if we want to say so, and was used as a political statement.
2. The Columbina: it covers only the eyes and a little bit the nose, I would say, it is the most common mask we find for Carnival. It is a female mask, hold with a nice ribbon in the back of the head. It is most of the times colorful decorated and is used by women that want to be more sexy.
3. The Medico della Peste: this is originally a functional mask worn by plague doctors. In the long beak or nose there were herbs that should prevent to inhale the bad air of plague patients. Again a male mask, not very much decorated, most of the time super simple in white.
4. The Volto: is worn by men and women, the decoration changes a little bit with a more female or male appearance. It covers the entire face and gives you the possibility to stay very much anonymous.
5. The Pantalone: has a long hook nose or nearly beak and funny slanted eyes. It is decorated but still pretty simple. He presents the joker of the group and very social. (Male mask)
6. The Arlecchino: a colorful very much elaborated mask with a grinning face. It has nice arches around the face with little bells that ring with every move of the face.
7. The Zanni: it looks the Medico with a long beak-like nose. The length of the nose tells you something about the IQ of the wearer, the longer, the less 😉 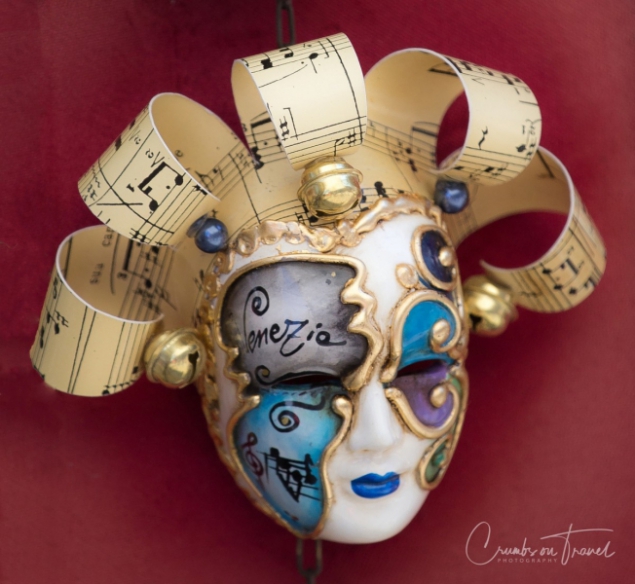 Well, that’s the story of the masks in Venice. What do you think? Do you like the masks or are they kitsch for you? I bought a few little ones and – as you can clearly see – I like to photograph them. I still wish very much to go to Venice one day during Carnival season to see all those historical costumes, too.

I like also very much what one can express with just wearing a mask. He/she can hide but express him/herself very clear. For some people maybe it is the only moment to show their feelings or to live for a short time with someone else’s face. We all know the eyes and the face is our soul’s mirror. 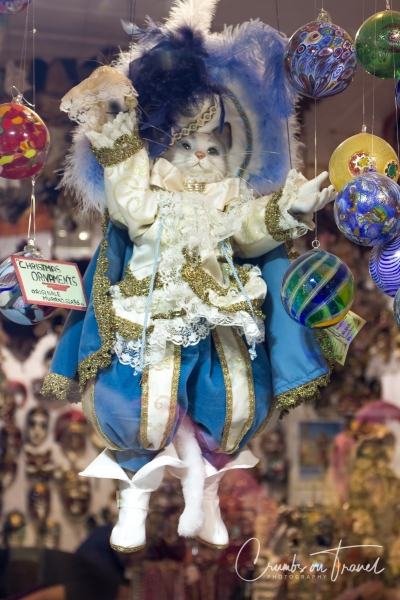 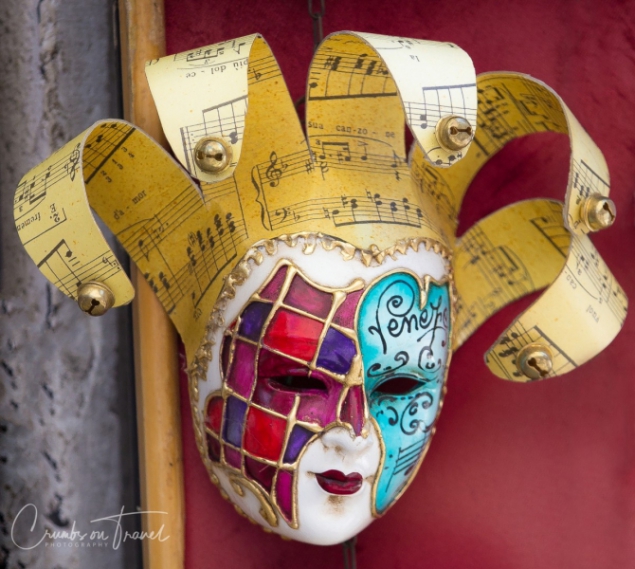 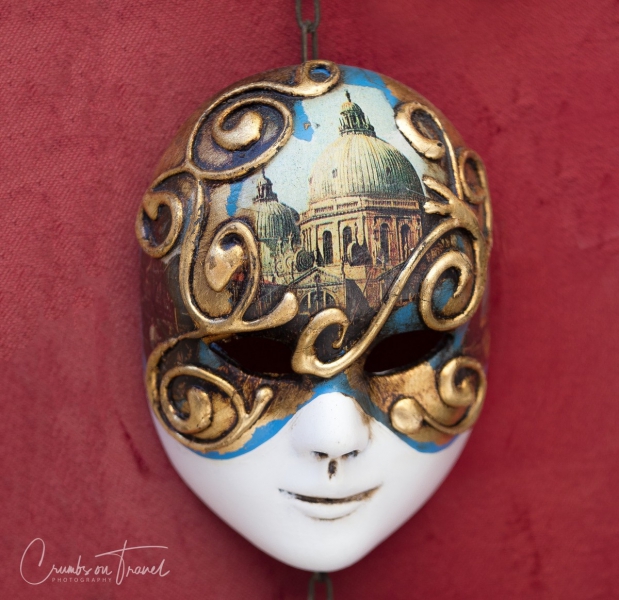 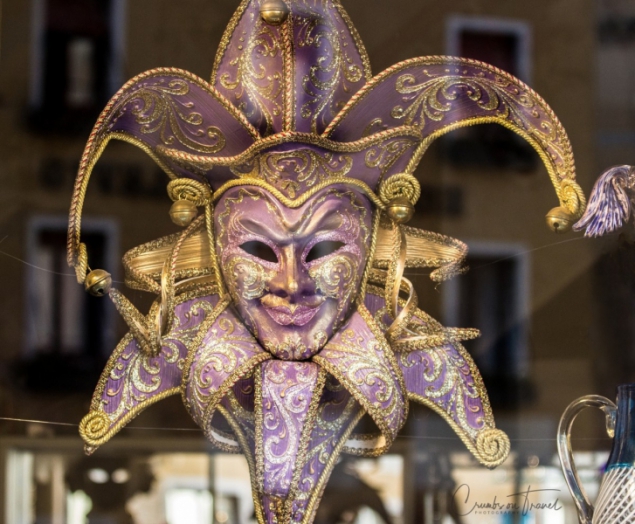 The Church of Gold in Venice
The first Bridge over the Grand Canal in Venice – Rialto Bridge
Venice – Metropolis in the Blue Lagoon
This entry was posted in Europe, Italy, ON TRAVEL, Veneto and tagged venice. Bookmark the permalink.