Discovering One of The Most Interesting Cities in Austria – Graz

While already in the Copper Age there was a settlement, Graz has only from the Middle Age a historical continuity of a settlement. And this long history makes it one of the most exciting cities of Austria.

I am a lucky girl because I have a very good native friend living in this place that gives me the opportunity to visit a beautiful, historical city. Though it’s not a surprise that I took my car when I stayed a short time in Northern Germany at my mother’s home and going down to see him – and of course Graz. I only chose the wrong timing for weather as it was raining a lot. 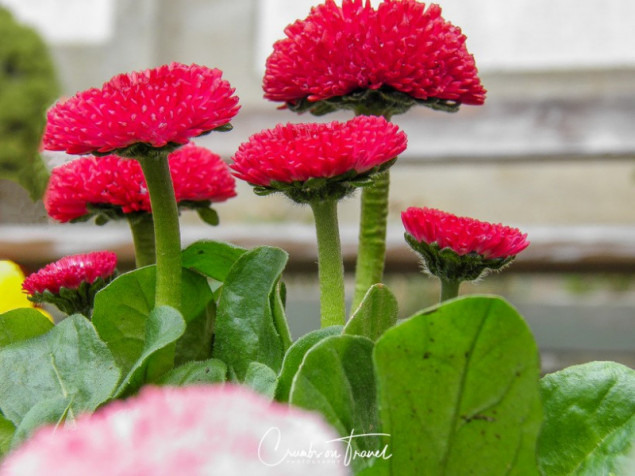 We had a few days together and one of the days we spent to see the inner city of Graz, his native place. It was not easy to find a parking place without spending half a fortune. But we resolved the problem anyway and had a nice afternoon in the town.

Of course, he showed me the most interesting, historical and touristic places the very first time. Just to have an overview and orientation. So we started at a big and – I admit – very suggesting shopping-center: the Kastner & Öhler. No, I didn’t want to shop but the place is nice and really a look worth. Especially the top-level where a snack-bar with a roof-garden gives the opportunity to see the whole city from its roofs. The shopping-center exists since 1883 in Graz and the architecture of the building is old-style and very impressive. 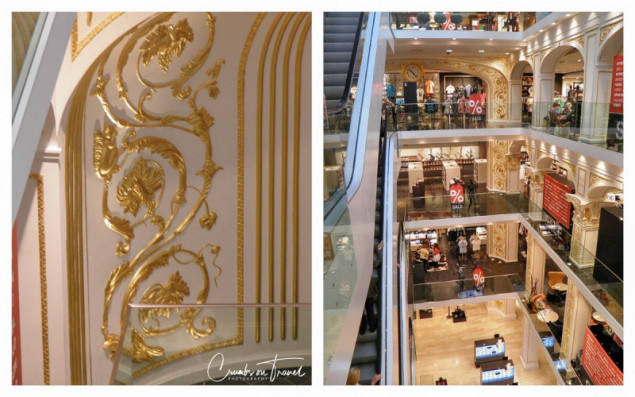 As it stopped to rain we took the moment to have a walk in the streets. The main town square (Hauptplatz) is surrounded by stunning house facades, more palaces like than normal houses. Arches under which there are nice shops, beautiful paintings on ceilings, colorful walls, high windows… and a tram passing through the crowds of tourists and not. 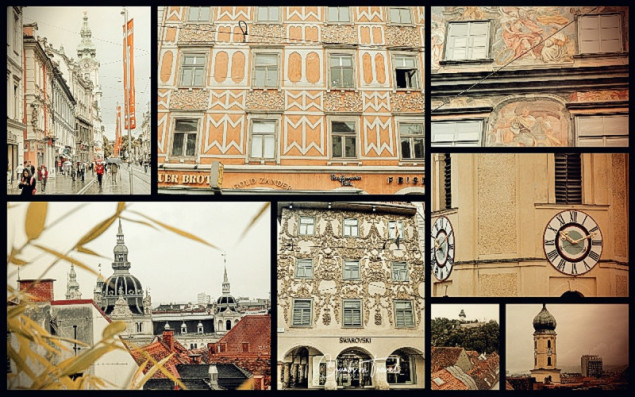 We entered a church named as ”Stiegenkirche” (church with stairs). It has a number of stairs inside a house to go up to enter the church, that’s why the name is from (I guess). It’s the oldest church, from 1343, and situated in the Sporgasse in the center of Graz. 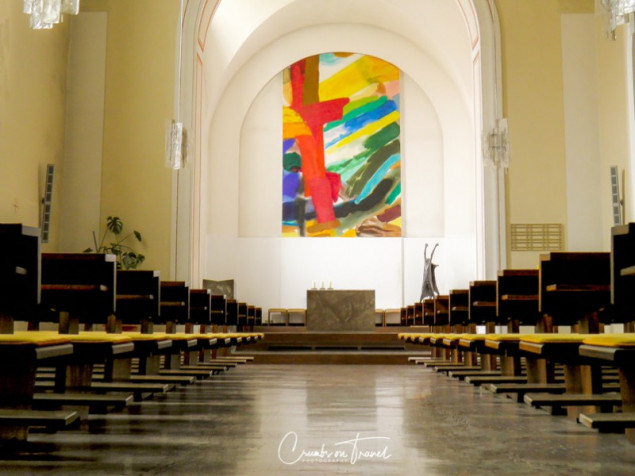 After the church we had a look at the Styrian Armory (Landeszeughaus). Very suggesting and a ‘must-see’ for everyone interested in armor and weapons of the past. 32.000 pieces are exposed and it’s difficult to resist not to touch them. But also very easy to imagine a lot of soldiers wearing these armors and marching towards the enemy.

We walked in the beautiful yard of the Landhaus where the federal state parliament of Styria resides. It’s a palace in Lombardi style and has a really funny roof gutter. 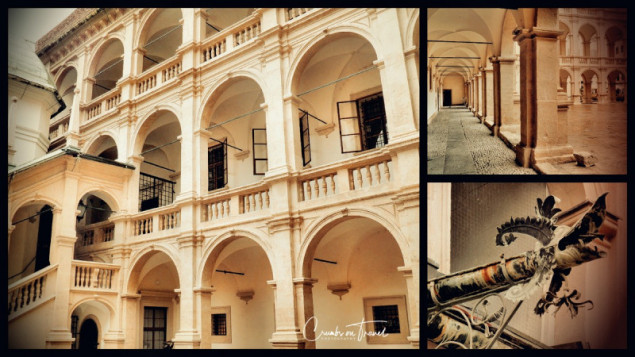 Just before heavy rain came down again we entered an amazing building: the Palais Herberstein. I really love the red carpet on the stairs and the painting on the ceiling. I couldn’t stop to wonder how beautiful it looks. In the Palais there is the Universalmuseum Joanneum with interesting exhibits. The architecture of the building is baroque. 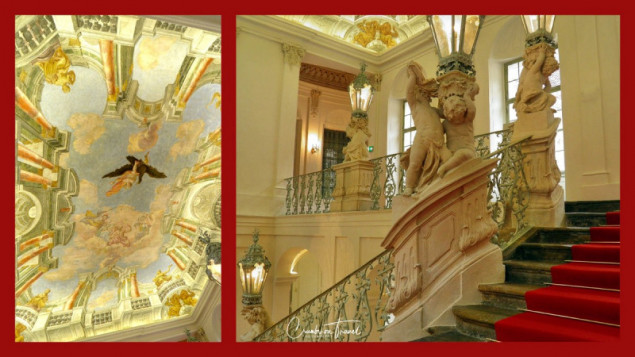 In the same street (Sackstrasse) there is another Palais, called Palais Attems. It is the most important Aristocratic Palais in Styria. The palace was built by an Italian family called Attems (from Friuli) in the end of 17th century. Again I could admire wonderful ceiling paintings. And I admire my friend who knows the history of every single place in Graz. It was amazing to listen to a historian while enjoying all the beauty of the past and present. 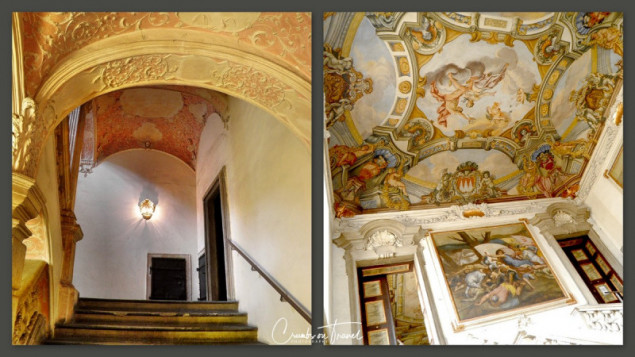 The nearly last place we visited this afternoon – my head already spinning around with numbers of dates, names, facts, happenings and having a hurting neck from continuous looking up to ceilings – was a very particular spiral case: a double spiral case or twin spiral case. It’s found in the castle of Graz and built around 1500 a. C. by an unknown master builder under Maximilian I. 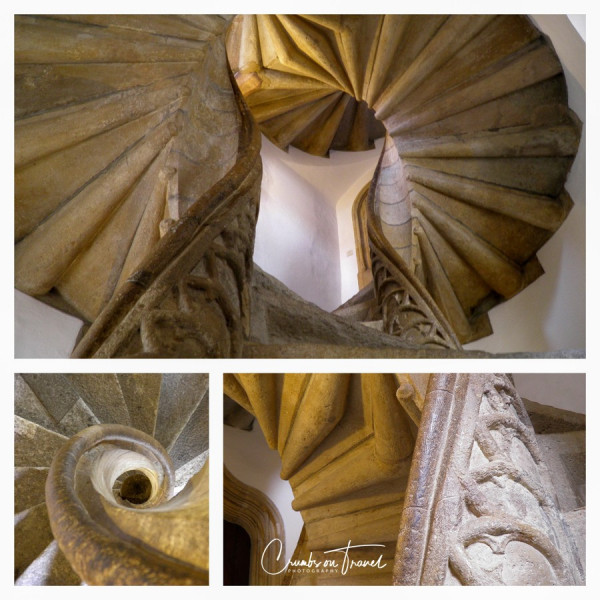 Again just before it started to rain heavily we got to the top of the castle mountain (Schlossberg). This is in the middle of the inner city of Graz and seen from nearly every place in the town-center. The most notifying fact here is that it was never occupied in its story and only the complete demolition by Napoleon after the Peace of Schönbrunn in 1809 gave it an end. Today it’s a beautiful public park with benches, flower-trees and a super great view on the city. The clock tower (Uhrturm) on the top is widely seen. Nearby there is a nice restaurant where one can eat and take some refreshments. What we did waiting for the rain to stop.

My friend let us take the elevator to return in the city. The elevator-entrance is very particular and also a ‘must see’ in Graz.

I enjoyed my visit a lot this afternoon. And I am happy that I already returned another time to visit my friend and the city as well. I am sure there will be many other occasions to go around between the ancient streets of Graz and I am looking forward to listening to all the interesting stories my friend has to tell. 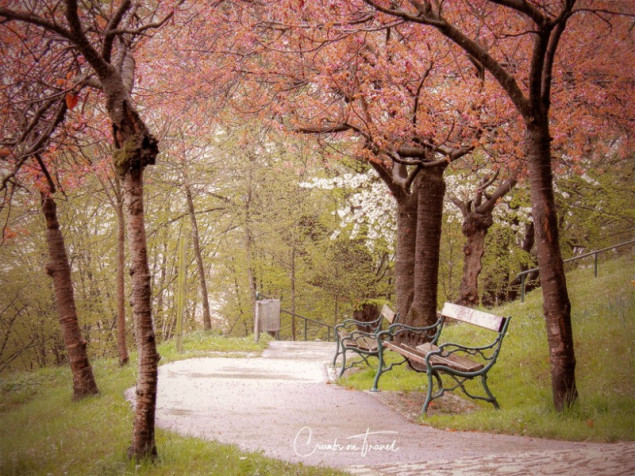 … and a book about interesting architecture in Graz:

A Cistercian Monastery in Neuberg an der Mürz
A Culinary Tour in Graz and Lunch at Mangolds
3 Steps in Bruck an der Mur in Austria
This entry was posted in Austria, ON TRAVEL, Styria and tagged Graz, Styria. Bookmark the permalink.