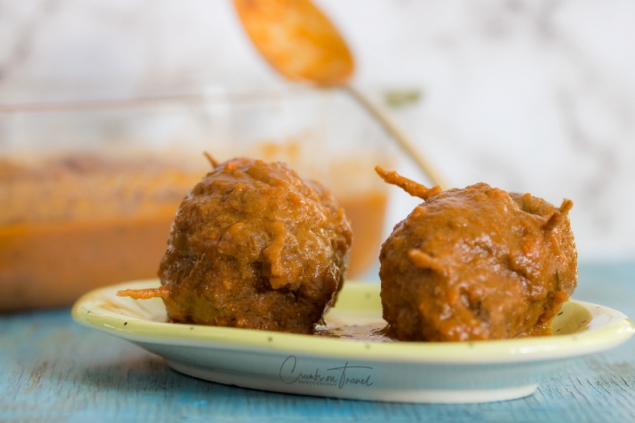 It is the way it is: my sweetie pie likes German cuisine. I grew up in Germany but never learnt how to cook there and never liked the German cuisine very much. In fact: my favorite German recipes are pancakes (northern German style thick pancakes filled with apples slices) and northern German style potato salad (with mayonnaise and yogurt). That’s it. Especially since the meat dishes are often very heavy in Germany, I like more the light Mediterranean cuisine.

So with a sweetheart who literally goes nuts for all German food, I have to learn from time to time some German recipe. This time on special request I prepared German braised beef rolls or – in German – Rinderrouladen.

I know them served with cooked red cabbage and potatoes, my sweetie would prefer potato dumplings.

I prepared the roulades the very German style with thin sliced pickles, onions and bacon. The mustard gives a very special taste to them. All is rolled up and hold together with toothpicks.

The roulades are cooked in a base of leak, carrots, onions and red wine. A teaspoon of tomato paste gives color and flavor. Important is that it cooks (braise) slowly, around one and a half hour.

Key-role is also that the roulades in the beginning have to be stir-fried to close the meat that it will not loose all its juice during the cooking process.

The roulades once were a dish of daily life, today – I guess because it is a little more work to prepare – it is also a typical festive dish. It has no flour (the meat can be floured a little before stear-frying, use tapioca flour then) and the gravy is creamy also without any starch. It is a complete healthy, paleo dish. I would serve them also with rice or better cauliflower rice instead of potatoes and red cabbage.

As meat use a special thin cut of topside beef/veal or round steak. Ask you butcher to cut it for roulades, he will know what you need. About the mustard: use any you have, a very simple one is OK. Just spread it thinly on the inner side of the roulades.

Note: With crock pot I don’t mean an electric slow-cooker! It’s like a casserole.

No toothpicks in the house? Use some string or thread.

My sweetheart felt like in heaven today when he was enjoying his lunch. For dinner at work he brought another batch. There are still enough for more lunches and dinners. You can make it ahead, in the fridge it is perfect for the next few days. You can portion it and freeze the roulades with the gravy. They will be perfect whenever you want them. 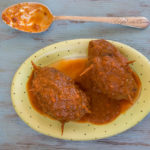 The German Beef Rolls are best the day after, similar to a stew. You can also freeze portions of them, they will be perfect in any minute.