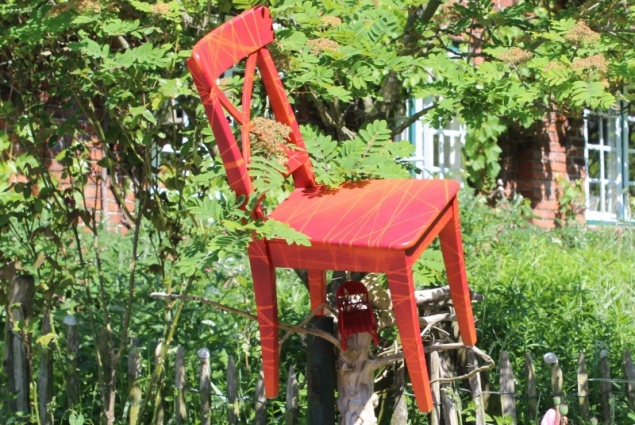 Already last year I had the opportunity to visit a few open studios of northern German artists. This year happened again when I am still here and a friend of mine – also artist and participating with her gallery – drove around with me on two super sunny afternoons.

The weekend of Open Ateliers is called ‘Der Rote Stuhl’ (the red stool). Participating artists put a red stool outside there home or atelier to show they are welcoming you. An initiative three years old and organized by the Ostholstein Tourism. From Lübeck to nearly Kiel dozens of private, renowned and of all kinds of artists open their atelier to the public. 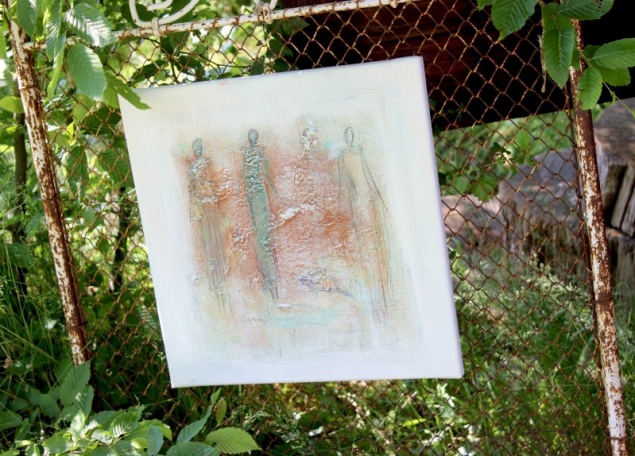 The very first we visited was Bianka Muss. She is a painter and has one of the most beautiful gardens I have seen. Living in a small village (and difficult to find without a navigation system) in the middle of woods and fields her house is one of these old, crackling houses. In her wonderful, typically called farmer’s garden she offered a lot of relaxing places, coffee, tea, wine, homemade cakes. Her Artistic works were exposed in the garden, between bushes, hanging on old rusty bed frames, hanging from trees. A lot of people sitting in the sun, drinking coffee and chatting with the artist. We stayed way too long here… 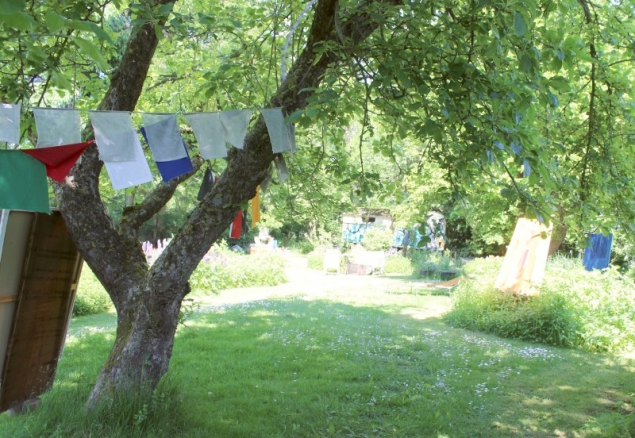 The very next was Susanne Bunken. She was right on our way and another surprise. She is a mother of eight children, lives with her husband and her brood in a huge old farmer’s house and has a nearly endless garden with lawns, vegetables and fruit. They are nearly a self-sufficient family.

In her spare time (I ask myself WHEN having such a huge family and a garden, harvest..) she sew. In the beginning it was for her family to safe money, then it became a hobby.

Quilts and especially dolls are her passion. And they are adorable!

We had a tour in her garden as well. Amazing! And like many I have known during the last time, they have their own honey. It seems to be a trend to have beehives in the garden. 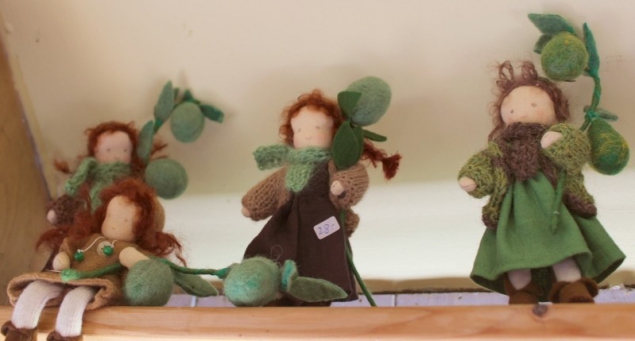 Lilo Müller was the last one we visited the first afternoon. She is a very famous artist, paintings and sculptures as well. Huge paintings with mainly bright colors, some dark and a little moody (for me). 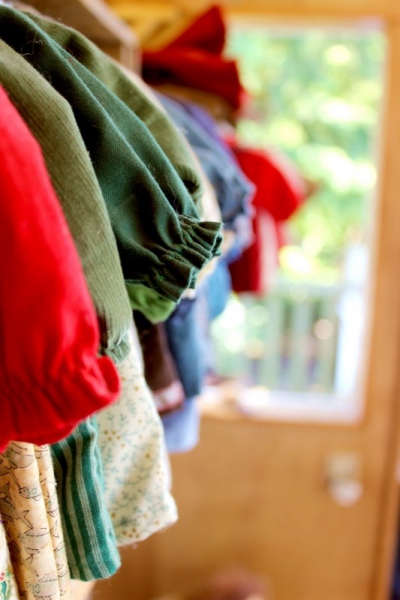 My friends knows her well as she attended once classes with Lilo Müller and it was through her that my friend re-started with painting.

Lilo Müller is an elegant, beautiful elder lady in her seventies, studied art and is painting from her young age. She gives art classes since 1992. 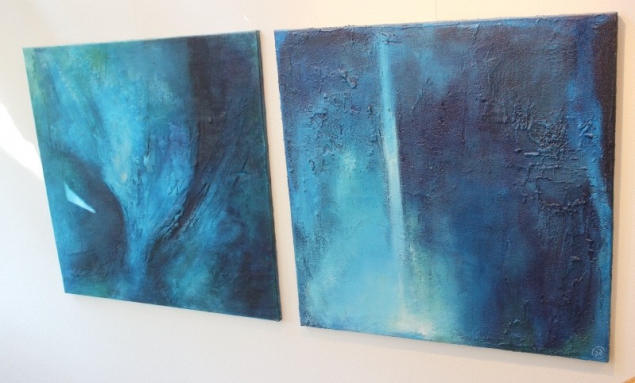 We had an inspiring chat, sitting shortly on her terrace in the garden. Also this one is beautiful, full of green, flowers, a huge pond with a bridge, horses and donkeys grazing on a nearby lawn.. the perfect venue to be inspired for paintings and sculptures. 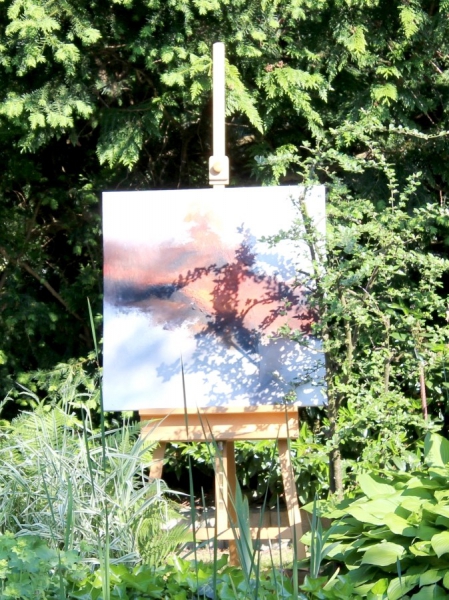 Sitting here and listening to my friend talking with Lilo Müller I thought nearly all painters (or maybe all) love to stay in nature, taking their fantasies and inspiration from here. They need a calm surrounding, need often a good company ones in while and have wonderful partners who support them at least morally.

She was the last artist we visited on this afternoon. We were exhausted after so much impressions. 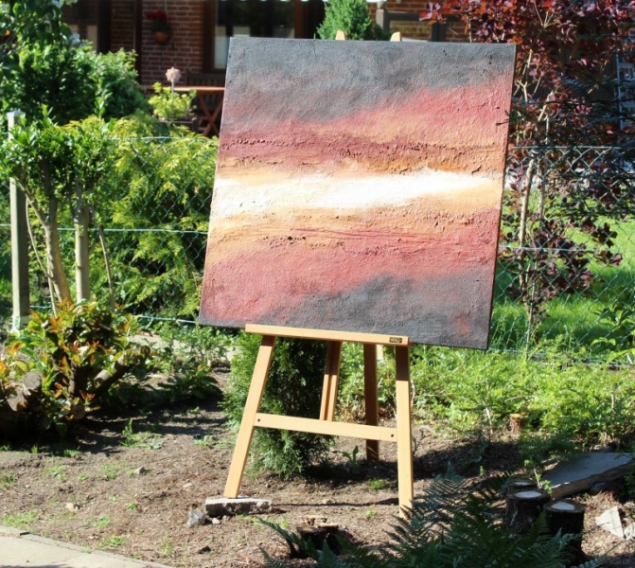 The next day we started our tour a little earlier which didn’t help too much as we got completely lost on the way to Kay Konrad. But we have seen a lot of beautiful nature were we both never have been before, a little adventure as we finished in front of closed country lanes and we ended up to use the navigation system.

But eventually we arrived and were surprised about this huge atelier. 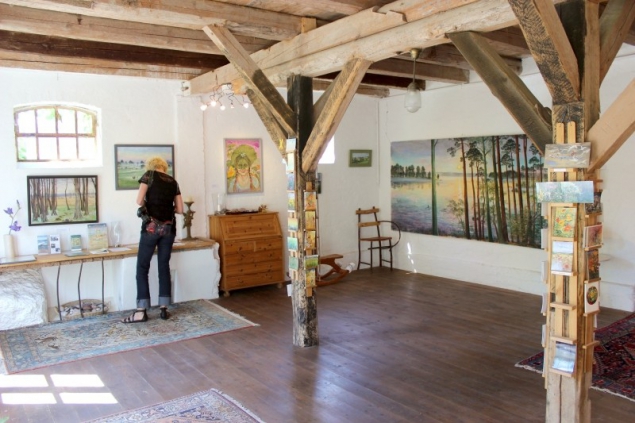 Kay Konrad is also a very renowned painter. He is a very tall man in his sixties and lives in a mega huge farm house. Again in the middle of nowhere as I mentioned above. But therefore maybe he creates so beautiful fantasy paintings. Some small some huge but all bright, colorful and amazing. There are also many paintings of flowers, vegetables and any plant which he likes in a special way. We could have also a glimpse into his studio where he seems also to sleep.

I bought an art-print I liked particularly, my friend some postcards. 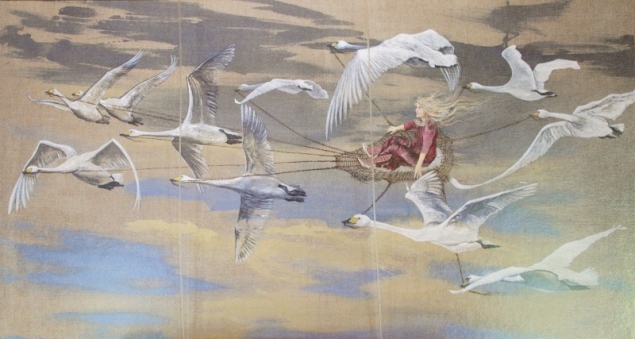 We tried another artist in the area but they were closed today. Very disappointing! So we drove to Manor Panker were I was years ago with another friend. The gallery was closed as well due to the late time. So we just sat down and had a coffee, my friend a cake. Later we had a tour through the still open shops bought some little things and drove home

We had a really great time these two afternoons. For her it was the first time she got around, for me the second. And we are sure: next year again! 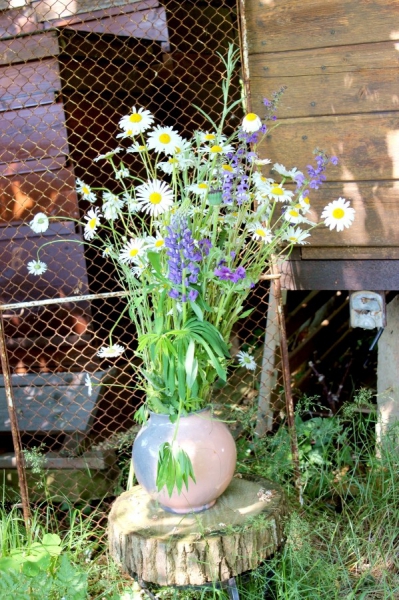 The Opening of the Gallery EigenARTig
A Weekend of Open Workshops in Northern Germany
Fascinating Straw figures at the Probsteier Grain Days
This entry was posted in Europe, events, Germany, ON TRAVEL, Schleswig-Holstein and tagged art germany. Bookmark the permalink.