An Unfinished Masterpiece of Architecture – the Cathedral of Siena 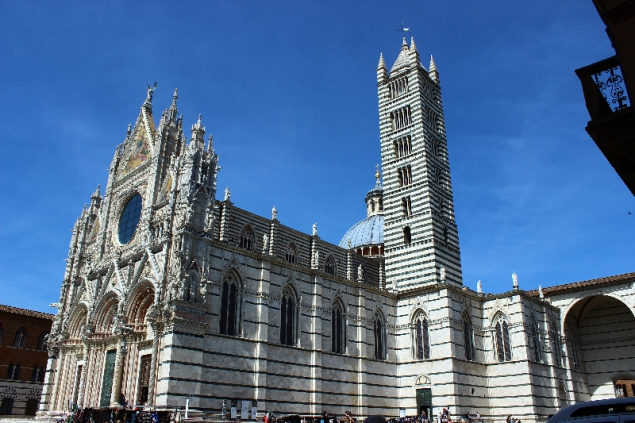 I saw once a documentary about the mosaic floor in the cathedral of Siena and since then I always wanted to see it. This time in Tuscany I finally had the possibility.

On my way from Pisa to Perugia in Umbria I stopped by for a whole day in Siena. As the city is not that big I had enough time to have a closer look to the city center and especially to the cathedral.

Already arriving on the place in front of the cathedral I had a look at something so beautiful and impressive like only the medieval period could have done. I sat opposite the cathedral to have a longer and better look and was really amazed by this great opera. Later a landlady of an agritourism told me that the cathedral was meant to be three times more than now. And it is already so huge. 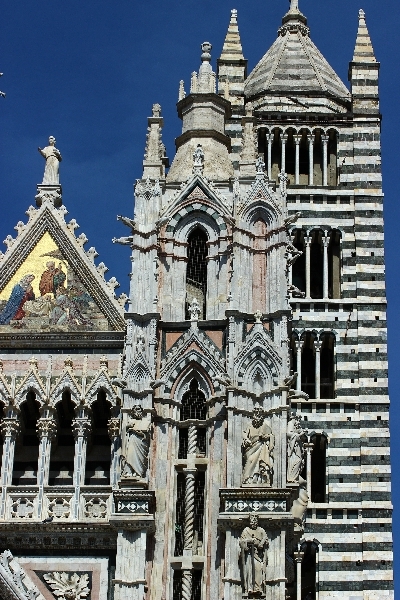 The cathedral dedicated to the Holy Mary is situated just in the center of the old city. It is surrounded by a big open space and a few other great buildings. The walls at its right side and freestanding are the first work for the addition of the main church because, the today cathedral was meant to be only a part of the originally plant.

The project was designed and completed between 1225 and 1263 but already in the first year they hold messes in this place.

The church was built on an older construction from which they found in the beginning of this century a narthex under the choir with late 13th century frescoes. These chambers are open to the public today. 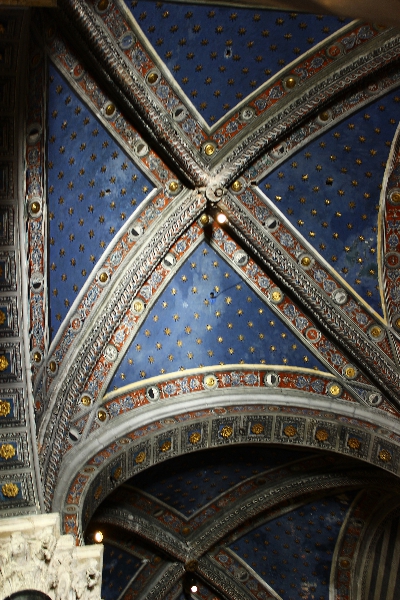 The facade is for sure one of the most impressive ones in Italy’s architecture history. It has three portals to enter the duomo, the middle one is from bronze and has a great work on it. I enter from the right portal made of wood and later leave from the left one.

The architecture is combining French Gothic with Tuscan Romanesque and Classical architecture. The black-greenish, white and red marble laid in stripes is so typical for that periods and are a fine example for its beauty. With the black and white marble the Sieneses show their colors of the coat of arms.

The impressive bell tower in the back and overlooking the place is incredibly high.

To see all art works on the facade of the church it will take ages. There is not one single place without a figure, mosaic or painting. 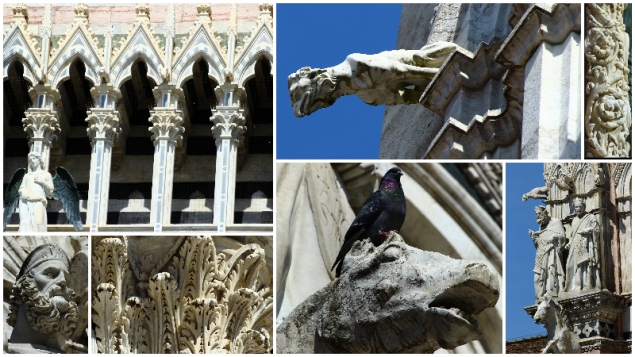 Entering this amazing masterpiece of architecture was another highlight. High vaults, columns, colors vivid and golden.. and then the floor. Jaw falling down and wondering how it is possible to create so much beauty.

The vault is shining in a incredible blue with golden stars. A look on heaven. The round window upon the choir is giving a lot of light inside as also the other round window on the opposite side and other ones in the center of the church. 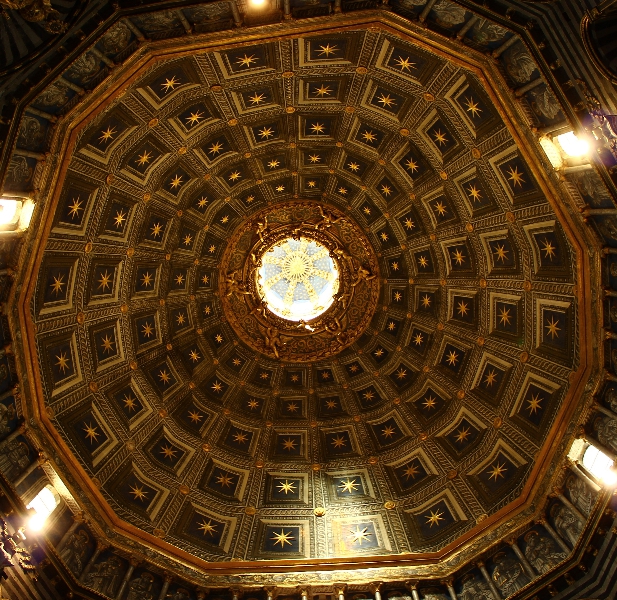 But it was still too dark for my camera to get the pulpit as it was not allowed to use flash or a tripod either. Don’t know why.. but I was even afraid to take out my gorilla pod as there were agents everywhere to have a look around.

Very impressive of course the floor. It’s an inlaid marble mosaic and of special beauty. It is covering the whole church and took two hundred years to complete (14th to 16th century!). 56 panels and 40 artists present scenes from the Old Testament, sibyls, virtues and allegories. Now a lot of people were walking on it, but some panels were fenced and so better seen. But I saw it in the documentary taken from the ceiling … Just imagine! 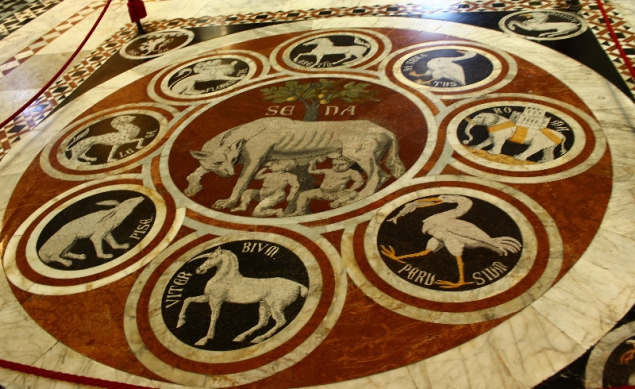 I entered the chapel of Saint John the Baptist in the left transept as well. Here is the statue of the saint made by Donatello. Pinturicchio painted the frescoes in only one year and this is the most impressive work in this chapel.

My ticket (BTW: you need to buy a ticket before entering the structure. Get one on the right of the cathedral. Be aware that there is a time on when to enter the church) allowed me to see also the library. Again a fascinating place! The Piccolomini Library is housing enormous choir books with vivid colors and scriptures. The library was commissioned by the Piccolomini family in 1492 and was meant as repository for a book and manuscript collection of Pope Pius II (a member of the family). 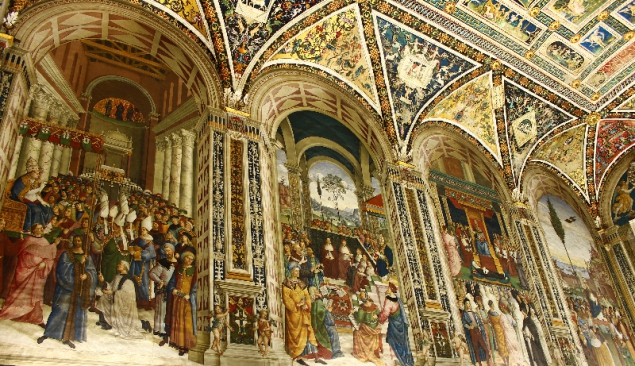 The Latin formed church was put in charge to the Opera di Santa Maria, a cathedral mason’s guilt. It was directed by Giovanni di Agostino and the work of the cathedral stopped at 1348 because of the Black Death. The added structure had errors in the construction and so after the Black Death has gone the work was never again resumed. The outer walls today give a good idea of what was planned. 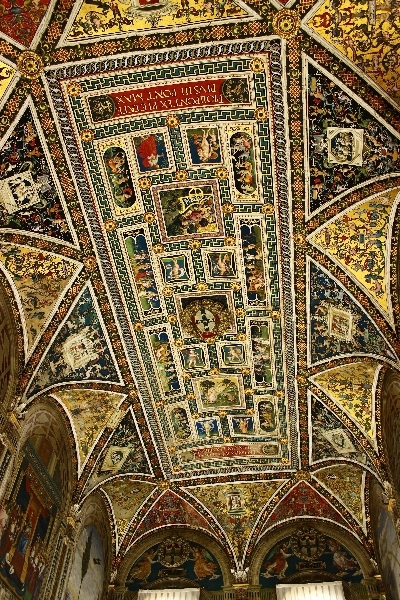 While I was sitting outside on the cathedral’s stairs – watching people walking by, school class kids playing with their mobiles, elder people from all over the world looking amazed on the facade and men with cameras taking pictures of their women in front of the structure – I was thinking of what this unfinished masterpiece of architecture meant to the people in the middle age. They wanted to create an enormous and beautiful house to honor God. Today they built cold churches, no ornaments, made of cement and no holiness in it. What a change of viewing the world…

For further information:
Siena
The Cathedral of Siena

Small Medieval City with a Great History - Siena
Saint Catherine of Siena
This entry was posted in Europe, Italy, ON TRAVEL, Tuscany and tagged Siena. Bookmark the permalink.