A Theme Walk in Lübeck 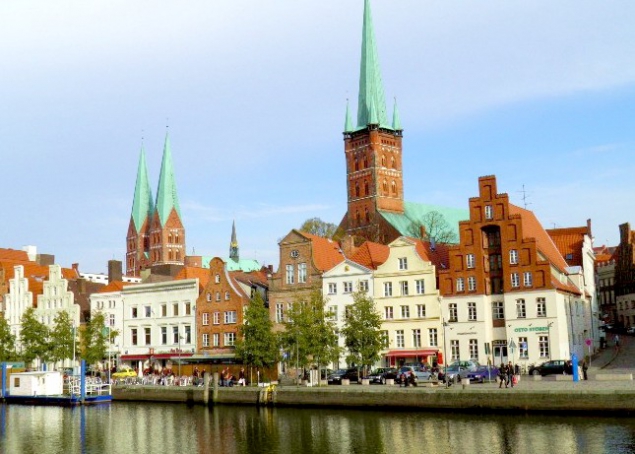 There are many ways to visit a city or famous place. And the one I did some time ago is for sure a very original and funny one: we had a theme walk through the town. We spent a whole afternoon trying to shoot 12 themes we got. It was a competition of the city management of Lübeck. The winners could get workshops, cameras, bonus and a lot more. It took place in Lübeck and I asked a friend who likes photo shootings as well if she would like to come with me. Sure she did. And so that day we took our cameras – a compact (hers) and a canon EOS 600D (mine) to shoot around. 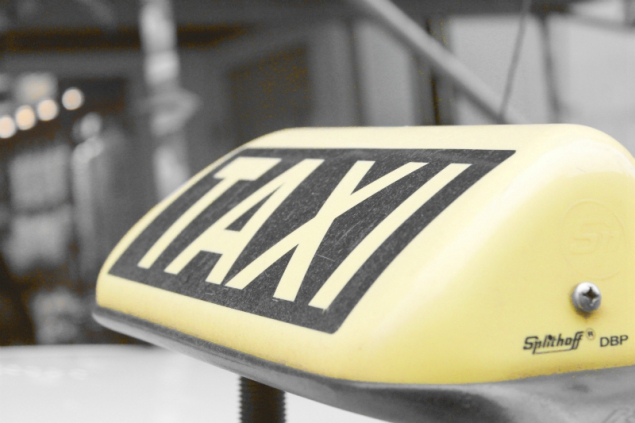 This was the first challenge. We thought about the train station. But that would be a long walk we didn’t want to do. So we tried bus station, bus, taxi and so on. She took bicycles, me the taxi sign. 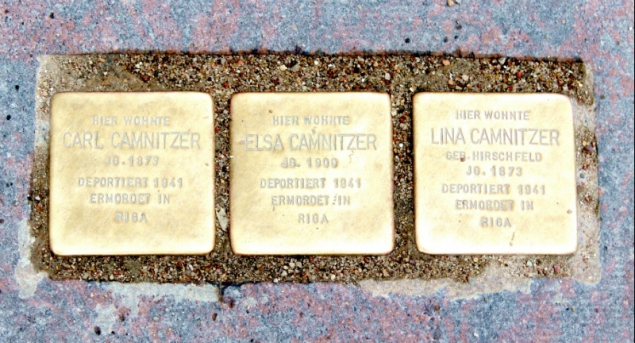 That was easy. There are a few golden like badges hidden in the pathways everywhere in the town center to remember the deported Jewish from Lübeck in the second world war. We found them and took a shot. 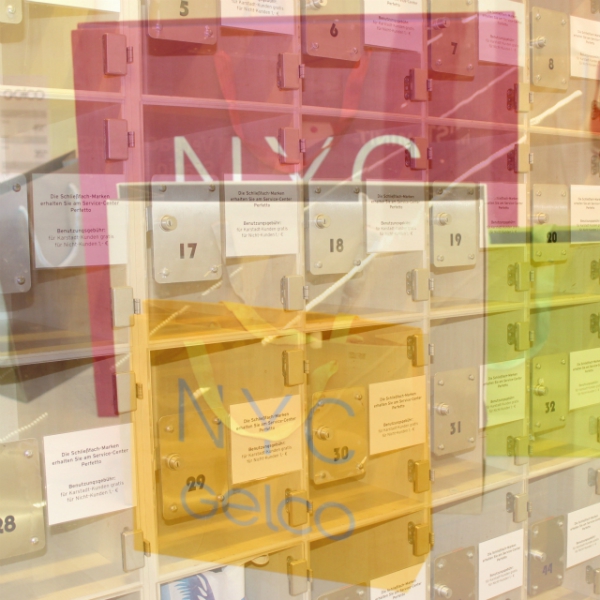 Oh, again something we both had immediately something in our minds: a waiter. But fact was we already had lunch and we didn’t want to go in a restaurant and just ask a waiter. So what to shoot? It was one of the last shots we did because we didn’t find anything really interesting. At least we found some boxes where to let the shopping bags while shopping in a supermarket. I made a overlaid pic out of it with colored shopping bags I saw in a window of a shopping center. 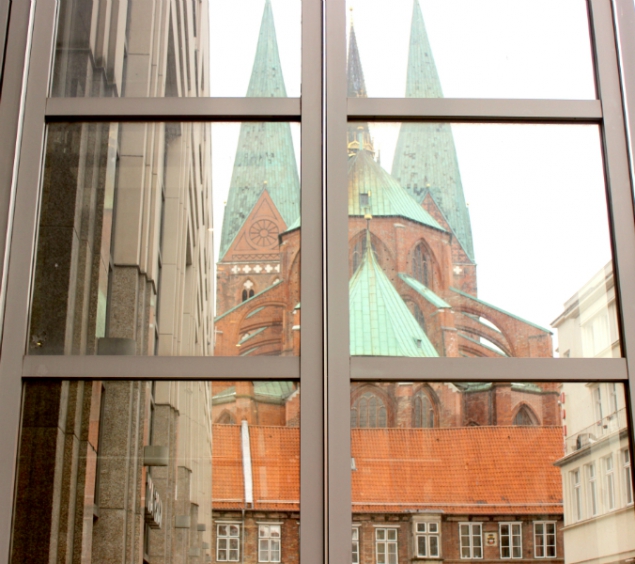 The word ”great” can be seen also as peak. So we both took the high steeples of the Saint Mary’s Church in the town center. I thought it’s a nice shot reflected in the modern glass front of a shopping center. 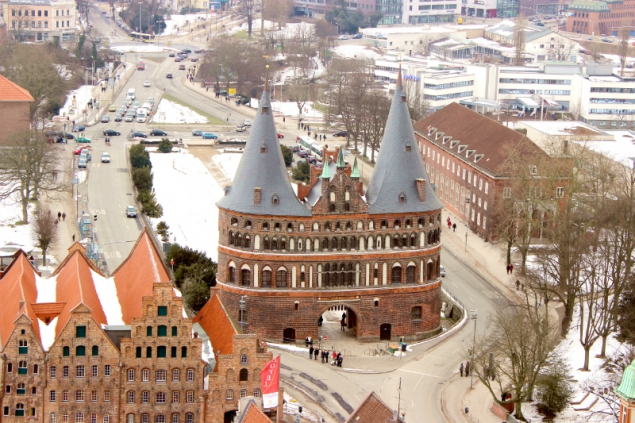 That is definitely not a difficult one at all in Lübeck which is an old Hanseatic city with a lot of architecture in Gothic style. We only had to choose. Of course the Holstentor (Holsten gate) is the symbol of the city and a ”must”. As we were on the tower of the Saint Peter’s church – we had the possibility to go without paying – we had a great overlooking panorama and with better weather we should see also Travemünde, 20 kilometers out of Lübeck and on the beach. 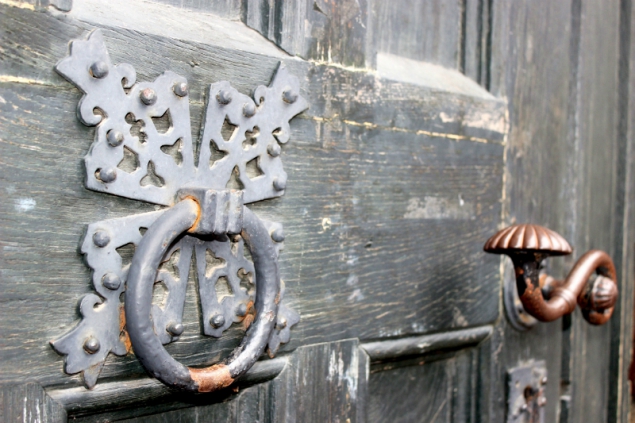 This one also had a double sense. That day they had a festival called ”Klopf Klopf” (=knock knock) and that was an idea. But we decided for a door knocker. We found finally one at a church gate. 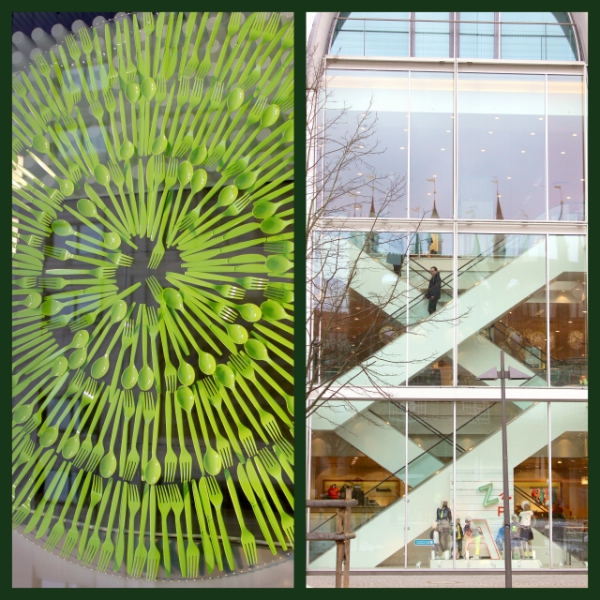 A gallery? A handicraft shop? The city is full of galleries and shops of all kinds of artisan work: paintings, photographs, works with wool, wood, metal, glass and other materials, jewelery and much more. I found a very remarkable circle in a shopping center. Only standing in front of it I realized it was made of plastic forks and spoons. Fascinating! The other one is the mobile staircase in a shopping center called ”Peek & Cloppenburg” and all glassed around.

Eight topic: Where are you coming from? 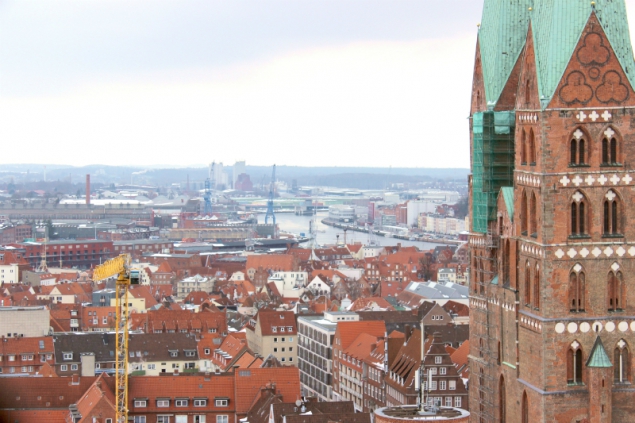 What is better than taking a shot from a far away place? Onto the horizon? That’s where we are from! Funny: we saw a young man who asked a woman who had her face painted like a ”Starwars”-member (maybe for commercial reasons) to held a paper on which was written ”I am from the universe”. That is definitely a good idea coming around the corner! We had no such idea and anyway my friend didn’t want to talk to people and ask to pose for us. 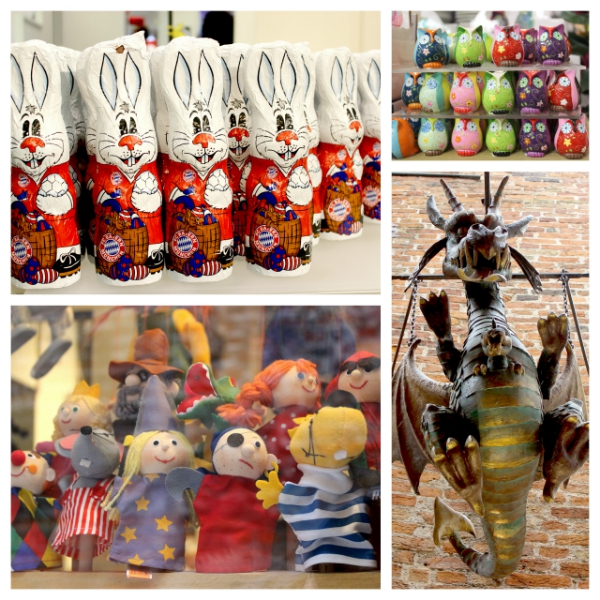 This is also a very wide going word because it could mean as well receptive and open-minded. We had a lot of thoughts around this topic but nothing really matching. I decided in the end to take some pics of ”creatures” that are welcome in Lübeck, wherever they are from. Chocolate Easter bunnies, owls, finger puppets and a very dangerous looking dragon.

Tenth topic: How tasty is this? 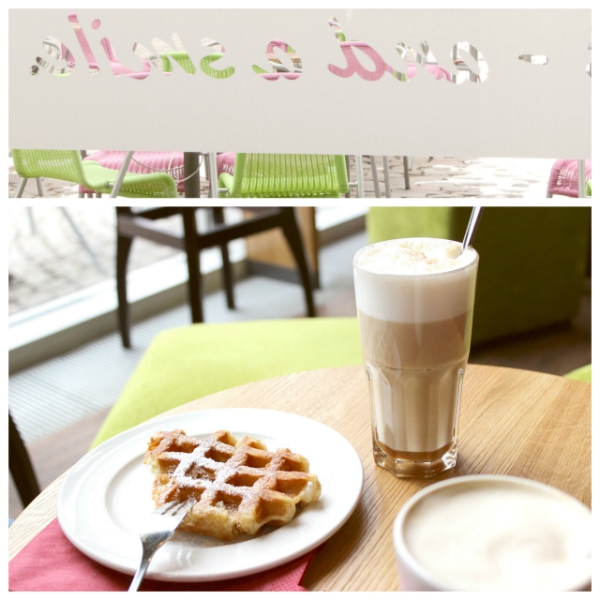 It was definitely time to have a coffee. Especially because we had a coffee for free. So we went to see were the cafeteria is. There we found just two seats empty and had a cappuccino, a cappuccino with caramel and a Belgian waffle (my friend). We finally sat down to rest our feet now starting to hurt. We had a change of ideas for the last two themes which were (still) the second one for service and the next for a smile. How to take a smile if not to ask people for smiling at us? A ‘smiling’ dog? Help! No, there seemed not to be a solution available. We needed to look for something that works. 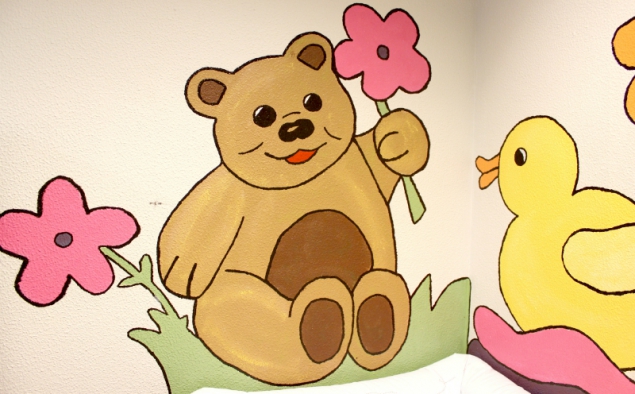 I had to go to the restroom after the coffee and there it was: the smile. In a corner there was a small place for changing babies’ nappy. And Winnie the Pooh smiled from the wall. We had not to asked, he just smiled at us..

Last but not Least the twelfth topic: Built near to the water 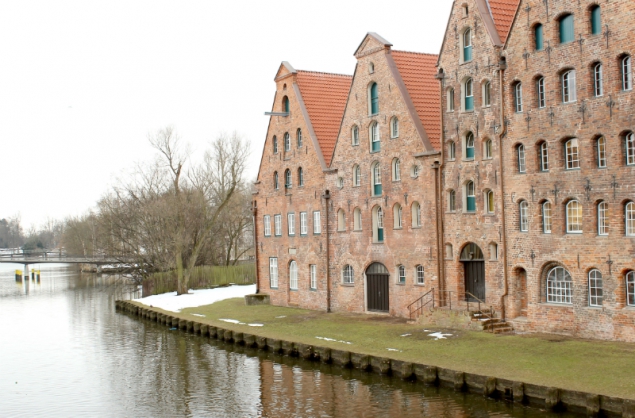 Easy too because Lübeck is built on a sandy island surrounded still by canals and the river Trave.

It was a very different way to go around in a town and it was a real challenge to find something to these sometimes really not easy topics. But we had fun and it was very creative. Meanwhile my friend participated in the competition and I decided not to do so. For sure I will do things like this again… maybe a good way to see things one normally would not when visiting a place.

A Different Way to Discover Lübeck
Photo Marathon 2020 in the Rain
This entry was posted in Germany, ON TRAVEL, Schleswig-Holstein and tagged theme walk luebeck. Bookmark the permalink.

8 Responses to A Theme Walk in Lübeck