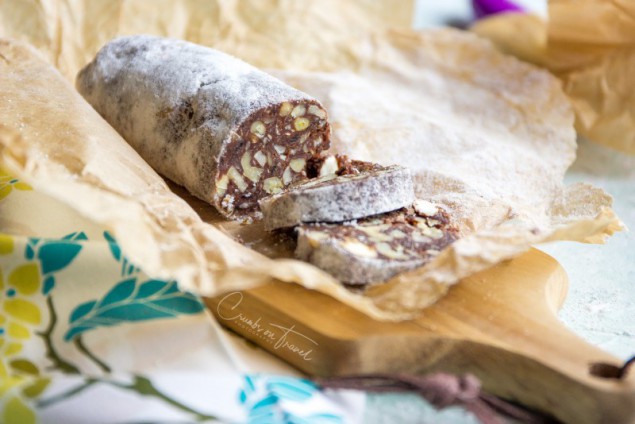 What I thought is a typical Italian Easter and Christmas treat is actually a very international known preparation. The ‘salami al cioccolato’ is simply called a chocolate salami in English but it has interesting names in other languages: In Greece they call it Mosaico, in Turkey Mozaik Pasta (Mosaic Cake), in Romania it is a Cookie Salami. It is even a Lithuanian dessert called Tinginys and – I discovered and didn’t know – in Italy they call it also ‘salame inglese’ (English salami). It is a PAT (Prodotto agroalimentare tradizionale) food, which means an officially approved Italian regional food product (unbelievable: only in the region of Campania there are more than 500 kinds of PAT foods!).

For me it is a typical Italian chocolate dessert prepared for Christmas and also for Easter. I always had it with hazelnuts and/or almonds inside and don’t recall so much the cookies honestly. But it is a nice chocolate treat that should not be missing at any major festivity.

The origin of this dessert is a mystery. I don’t think it comes from the Arabic cuisine even though in Italy or Spain many come from that part of the world. 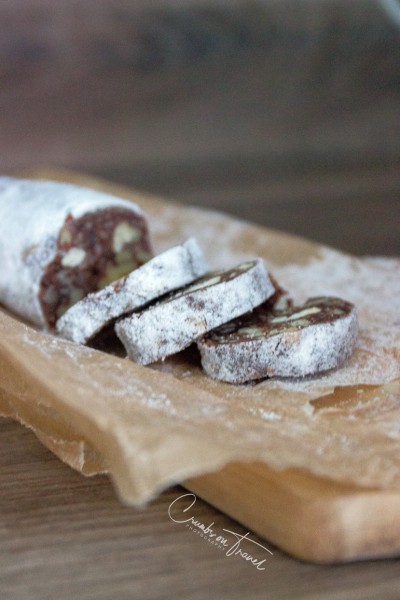 I prepared this ‘false salami’ like it is called in Austria, with almonds and hazelnuts, I put some hazelnut meal in it to give it a little more consistency and a not too heavy chocolate flavor. To make the taste more ‘intriguing’ I added also some Rum. After composing the sausage I rolled it in icing sugar (Xilitol) and put later some string around it, to give it a more ‘salami look’.

The chocolate salami is also great with some ice-cream or whipped coconut cream. Or just plain like it is. If you have children omit the alcohol and put instead some orange juice. Orange and chocolate are a perfect team! 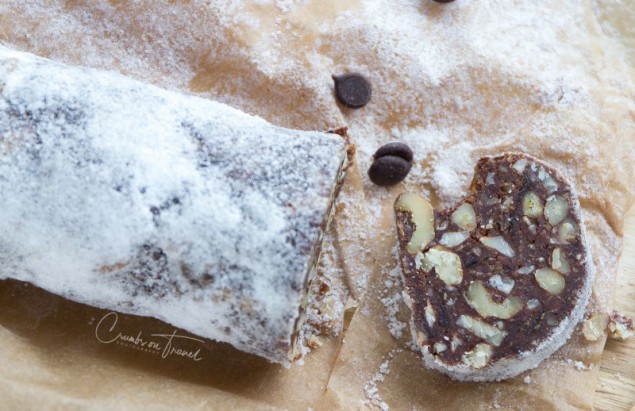 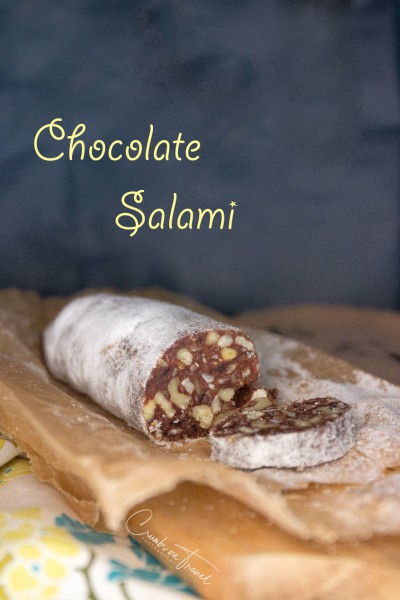 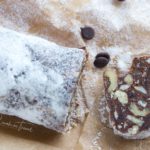 I used Xylitol, but any other is good as well. For the decoration it should be white sugar as e. g. coconut sugar doesn't give the right look.

Store the sausage in an air-tight container for a week in a cool place. It is possible to freeze the sausage as well.

Children in the house? Omit the rum and use orange juice instead.