A Meeting with my Past – Lauenburg and the Basedow Family 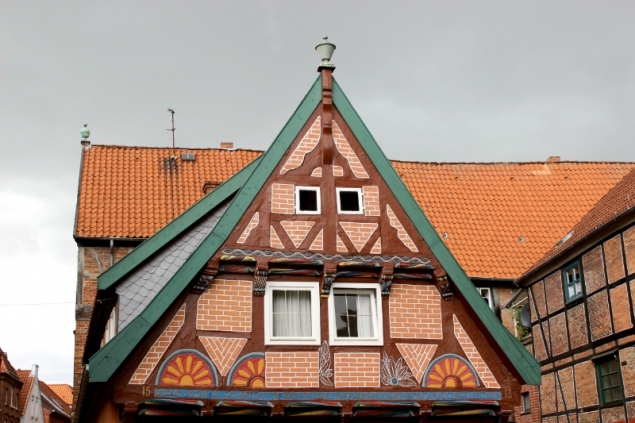 I have a special feeling with Lauenburg at the river Elbe. My mom was born there and had her family house in this beautiful little town. As I was a child we used to be there very often and we lived there for a while as well. I have been to school in the first two school years. That was a little funny because I’ve been to school those years in Lübeck as well. But my school class in Lauenburg was about 11 children, in Lübeck over 60 mates and we had to go to school there at alternate times. Well, long time ago.. 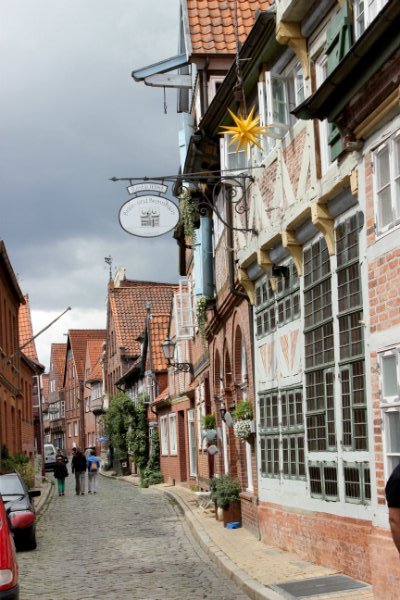 But I still have a very good friend living in Lauenburg (she used to live in my grand-ma’s house when she was still alive) and from time to time I met here over the years. Now a few days ago I’ve been there again and I took some time before getting to her house to have a walk in the old part of Lauenburg. And to visit the Elbschifffahrtmuseum. 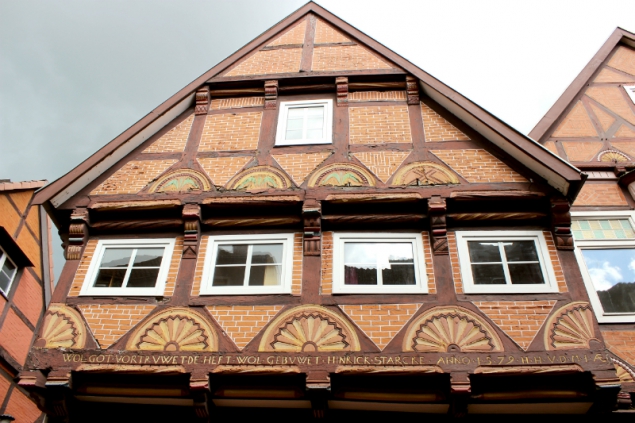 I parked my car in the Bahnhofstrasse so I could walk all the Elbstrasse along. Of course I wanted to take a shot of the symbol of the town, the so called ‘Rufer’ (shouter) but I don’t know why I missed him. Maybe I was too enthusiastic of the houses and brick architecture. Or being afraid of the rain coming soon… 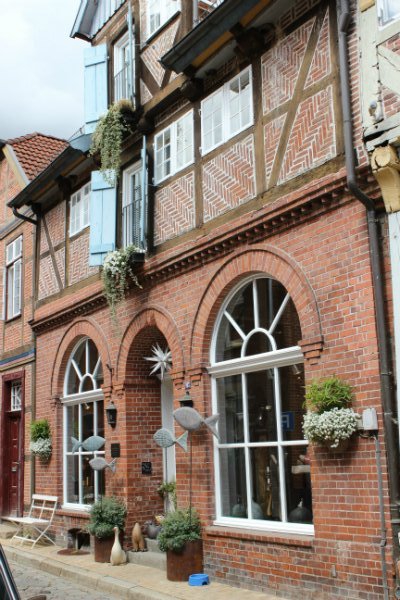 Lauenburg is the southernmost town of Schleswig-Holstein and was founded already in 1182. Bernhard of Ascania was the first Duke of Lauenburg and called the place Lowenborch which sounds like the modern name. John V, Duke of Saxe-Lauenburg reconstructed the Lauenburg Castle. Until 1871 it was a duchy, than incorporated into the Royal Prussian Province of Schleswig-Holstein. In the Middle ages it was a way point of the old salt route while today it’s the southern terminal of the Elbe-Lübeck-Canal.

In the last century it was a border town where the road leaded into the Soviet zone of East-Germany. 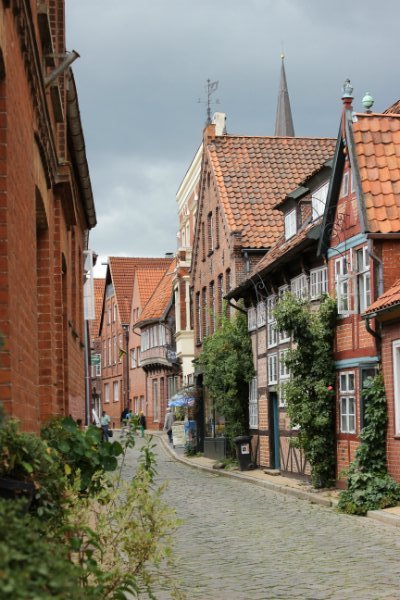 Nowadays the town has still a lot to sightseeing. Especially the old town is beautiful – as one can imagine on these photos. Unfortunately I didn’t make it to the Fürstengarten (duke’s garden) where you can find the tower of the castle, the last remaining witness of the duchy. Heavy rain and thunder came and got me into what I thought in the morning I would like to see: the Elbschifffahrtmuseum (museum of navigation on the river Elbe). 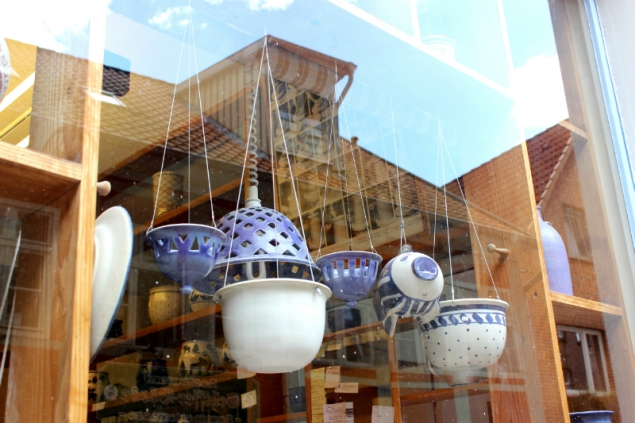 There is a reason why I wanted to see this little museum. I am not particularly interested in navigation history but my grand-grand-father is one of the most important persons in the Elbschifffahrt here in Lauenburg and made part of his huge fortune with it.

My grand-grand-father was Theodor Basedow (many know about the Basedow disease or Graves’ disease and some may know the Basedow wines from Australia, all same family). He had initially a brick factory which worked till nearly the end of the last century before it was definitely closed due to a lack of material. I have never known him personally but I knew, in the beginning of last century he took over the navigation on the Elbe in Lauenburg together with a friend named Burmester.

They did it so well that my grand-grand-father together with the brick factory made a lot more money than the family already had. Today there are still houses, lands and I don’t know what in the family properties. But much has already sold as far as I know and none is anymore involved in the Elbschifffahrt. 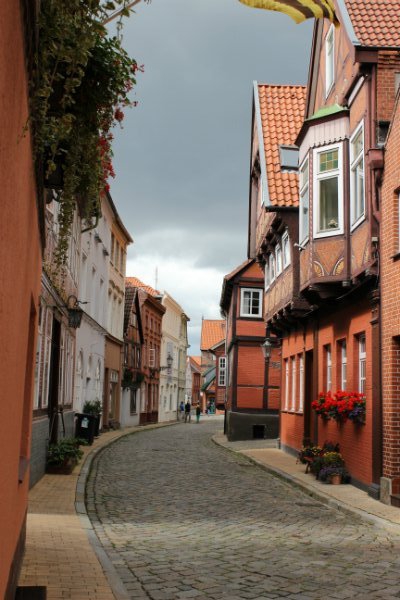 When a heavy rain came down and me standing under the roof of the oldest house of Lauenburg I saw just opposite the museum’s sign. Of course I got in and was so delighted to escape the rain and have the opportunity to have a look in the museum.

The museum consists of two floors. The first has the tourist information on the left and on the right three rooms with show cases about the first boats floating down the river till the heavy steam boats in the last century and modern machine boats today.

But the real jewel is the lower room with huge machines. A good amount of explanation boards explain the machinery, the importance and on which ships they were used. Children will like them as well as adults because they are impressive and have a great history.

With the two nice ladies in the tourist office I had a chat about the navigation, about Lauenburg, and about the Basedow. Thank you ladies! It was very interesting and I was glad about the rain that brought me here.

Leaving the museum I looked around what to see before leaving the old town. Very impressive is the Maria-Magdalena-Church behind the museum. It was built in the 13th century and looks like many churches in brick architecture. It was open – or so I thought because inside there was a glass door, closed. But I could have a short look inside which looked bare and very simple. I think it is a Protestant church for which it would be typical. 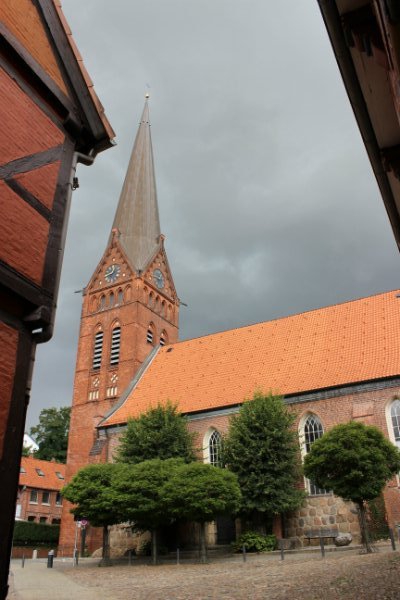 Following the narrow streets to the upper-town it leads to the Fürstengarten and the former castle. The original castle has long gone but there is still the original tower on which tourist can climb and have a great overview on Lauenburg and the flat surroundings of Lower-Saxony (once part of the duchy). Inside the now modern castle rooms there is the municipal administration.

The ‘Palmschleuse’ is a historic lock originally built in 1398. In the 17th century it was modernized and is today the oldest lock of Europe. I haven’t been there as well due to the bad weather and time lack.

But I took a photo of the old house of aunty Ella. There is a little story about: for a long time I was dreaming to stay as a small child in a huge house in the living room looking out of the window on the river banks. I never knew where this place was and why I was dreaming about it. Nothing happened there but I felt strangely home like it was my home as a child. It was not my grandmother’s house and I couldn’t remember it. When I saw the house last year down in the Elbstrasse being with my cousin I asked him and he told me it’s the house of aunt Ella and we’ve been there many times. So it’s still a family house. And my enigmatic dream is solved! 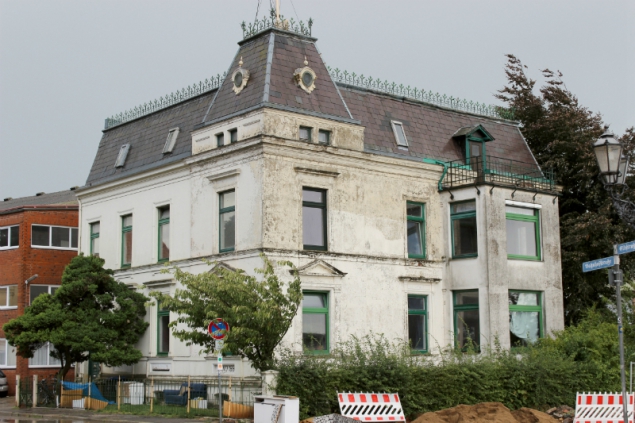 Of course I could not resist – and it is also a ‘motto’ of my travelings – to take some shots of ancient doors. I don’t know why but I think doors once were much brighter, larger, more inviting. Today they seem more lock-outs. Anyway… what do you think about these colorful, worked-out doors?

I still enjoy my visits to Lauenburg and the ‘remembering-feelings’ I get there.

For further information:
The website for Lauenburg Elbe
About the Elbschifffahrtsmuseum (in German)
About the Basedow (in German)

Marksmen Festival – At a Traditional German Festival in Lauenburg
This entry was posted in Germany, ON TRAVEL, Schleswig-Holstein and tagged Lauenburg. Bookmark the permalink.