A Day in Udine

I was at my friends home in Graz/Austria for a short visit and we used the days to go around in the countryside from one castle to the other. It was lovely weather and I really enjoyed the days. But it was my big wish to go on one of those days to Italy because I wanted to buy a few things there.

So one early morning we jumped into the car and headed South. We had a look in Internet the evening before which way to take and had the maps printed in front of us (having no navigation system in the car). We took the road from Graz straight to Klagenfurt, Villach, Tarvisio and down to Udine. It was not difficult at all, the weather great and our hearts full of excitement. 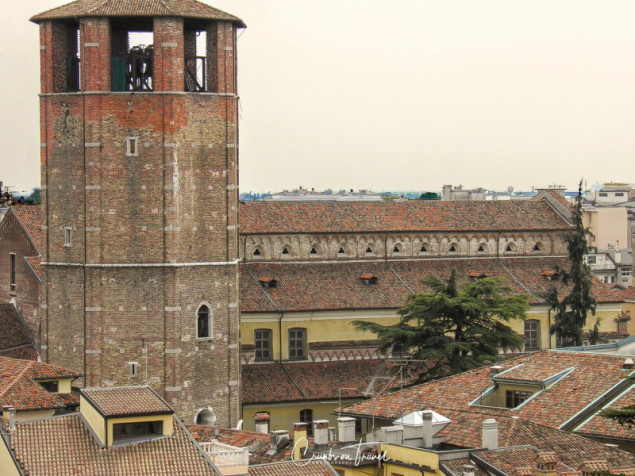 To find the town-center was also very easy, a parking lot a bit more difficult. But we were extremely lucky and we found a space just near to the train station (I think Via Roma, upper part) and so perfectly the right starting point for a walk. After resolving the fact about payments for parking we started to walk towards the station. 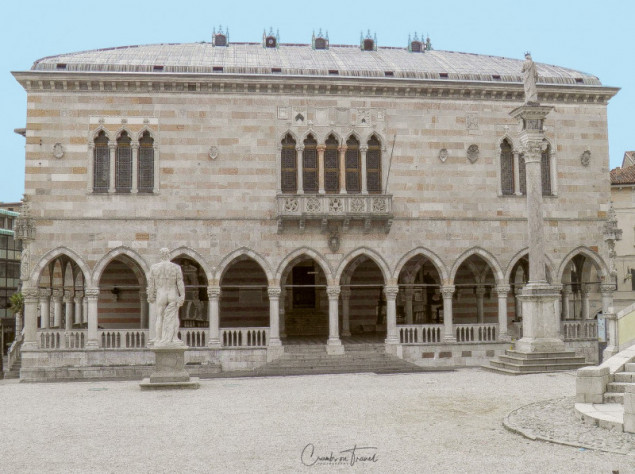 My friend – who is by the way travelblogger Andreas aca Travelwriticus – wanted to have a look at the station (as a big lover of trains and train stations) but he kindly let me first (before closing for lunch) go into an electronic shop where I wanted to ask some information about a device I wanted to buy.

After we started to go towards the center and discovered a lovely place with a lot of historical sights. 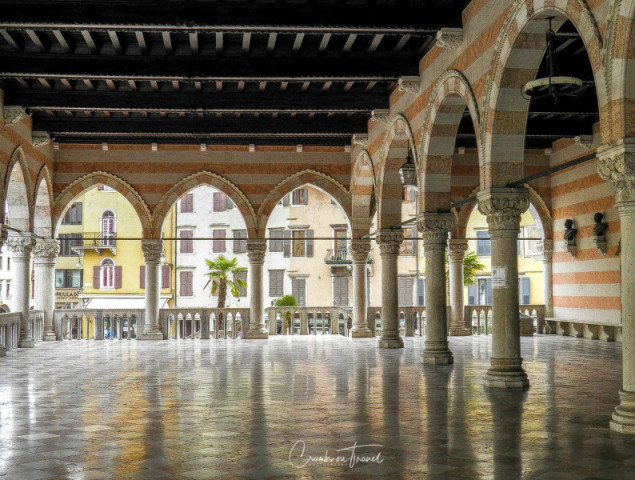 I think we took the Via Vittorio Veneto as this is often a main street in Italian cities ending on a big place. We walked through beautiful tiny streets, on big places and of course I had to be strong not to enter into all nice shops and boutiques (as walking with a male friend with of course less interest in clothes and handbags :-D). We stopped first in a beautiful big place called ”Piazza Libertà”, just under the impressive castle of Udine. It’s the oldest place of the town and in Venetian style. The most beautiful they say, and I would say so too. 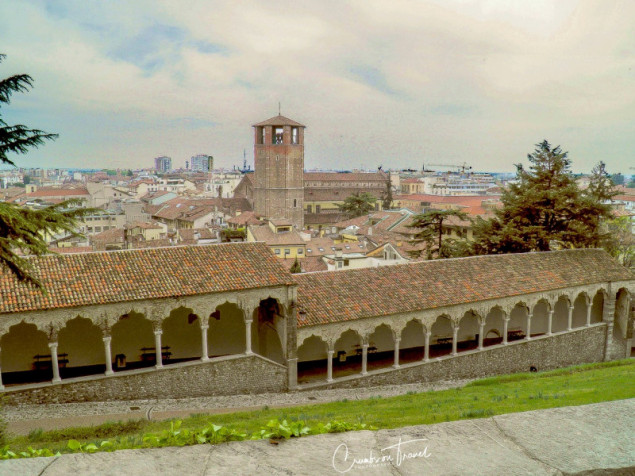 We had a look into the ”Loggia del Lionello”, impressed by the beauty of the historical architecture and the colors. Andreas liked watches in a glass case, the pavement and the columns – typical for a loggia. Very interesting also the Loggia and Temple of Saint George in front of the other Loggia. It has been once a church dedicated to Saint George, nowadays it’s a memorial for fallen soldiers. The piazza has a fountain in renaissance style, three columns, the clock tower and a few other monuments. 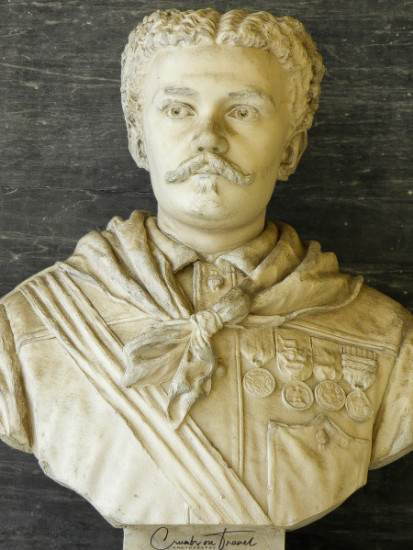 We passed a beautiful arch – ”Arco Bollani” and constructed by Andreas Palladio – to enter the castle. A cobbled street to the top, a small church unfortunately closed, a beautiful place with an amazing view in the city. We both liked the place a lot. We walked around without entering the castle itself. Like it appears today the castle was built in 16th century. The external decorations are by a pupil of Raphael, Giovanni di Udine.

We left the castle ground half an hour later and walked in the streets, now all shops closed and only window-shopping possible. We liked a lot ”Piazza San Giacomo” and the church of the saint. Somewhere in a small public garden we took a seat on a bench and having our lunch in the sunshine. It was incredibly relaxing. Udine has as well amazing palaces like ”Palazzo del Monte di Pietà” in Via Mercatovecchio, ”Palazzo D’Aronco” and others. We walked another bit around and left in the early afternoon. Just to head to a commercial center to get my electric device and have a look into the supermarket. Of course I took some items: oat meal biscuits, cheese, wine, fior di latte (a kind of mozzarella) and other things for cooking. Even some bottles of water because I love the Ferraelle water which is lightly sparkling. The commercial center is slightly outside the town center and very easy to find by street signs and near to the main road out towards North and Austria. 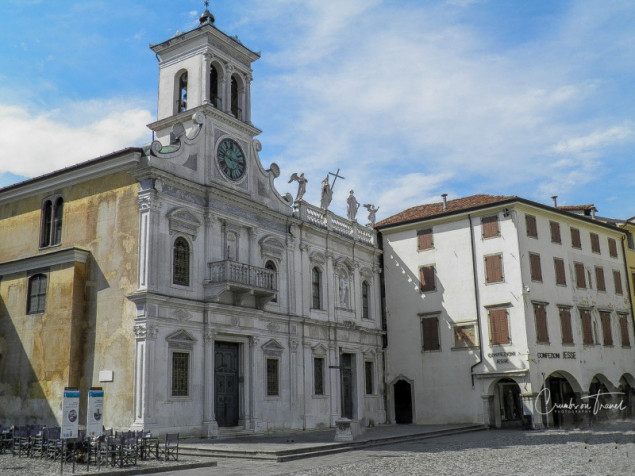 After shopping there and spending money (which was my main goal for Udine, so I had no reason to complain by spending) we took the road back towards Graz. We had about some 3 hours drive ahead, it was still bright, the sun high… we took some variations. Instead of the motorway we took the smaller streets. We tried to see what to see at Tricesimo and Nimis which claimed to be a sightseeing spot (we didn’t find anything). We passed Tarcento, Artegna, Germona, Venzone, Chiusaforte, Tarvisio and through the Val Canale and just before the border we had to enter on the motorway. Of course we came back to Graz late in the evening but we liked that day a lot.

Andreas and me, we took different shots of the attractions in Udine and so it is great to see now, what impressed him. Two persons and two different ways to see the world, have a look here . 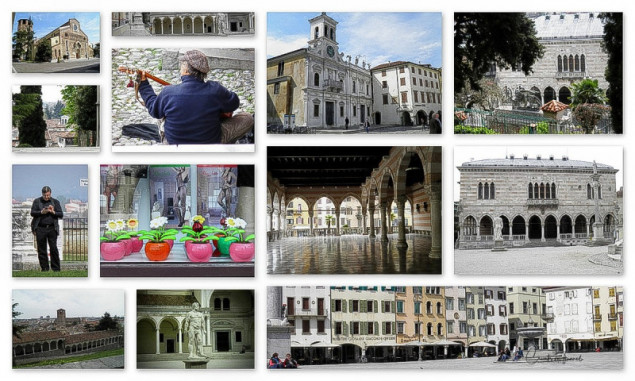 2 Responses to A Day in Udine