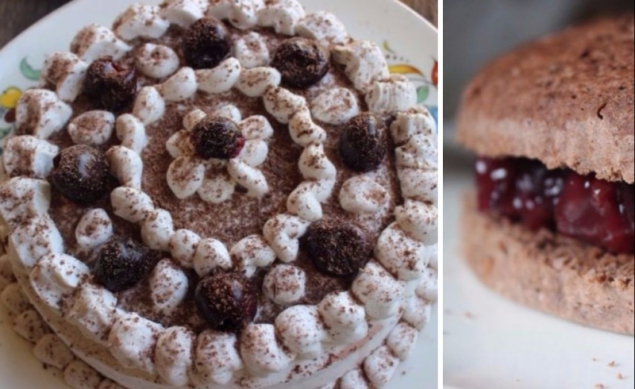 Mothers’ Day…. I never made a cake for this particular day as I had never the possibility. My mother lived far away from where I lived and it was high season as I was a tourist guide. No chance to get off and go to see my mother.

This year I was invited for dinner to my boy-friend’s mother’s house. Oops… can’t go without bringing something though. I thought about a cake. This way I could eat also a treat after dinner. Like many people his parents are not familiar with the paleo or gluten-free diet and it’s always good to bring something. It takes away the panic: ‘What can I offer her?’ And normally everyone likes the cakes I prepare.

Unfortunately I had some advertisement about Schwarzwälder Kirschtorte on my Facebook time-line that gave me the idea of a cake for Mothers’ Day. And my boy-friend thought the idea is great, especially this particular cake. I never made it before and especially not in paleo version…

OK, now it was too late! I looked up the original recipe and just converted the ingredients into paleo friendly ones. And I think it worked out well. The only concern was that the sponge cake was a little too dry for my taste. I guess it came because of the no fat recipe. Next I try with olive/coconut oil or ghee (which will give the better taste).

If you don’t have fresh cherries use frozen cherries like I did. Or if you have cherry jam from last year, that works perfect as well.

The whipped cream I made from simple coconut milk, just the solid part after you let the can overnight in the fridge. To be sure that the whipped cream ‘stands’ also after an hour, I added some tapioca, just a little bit, not more than a teaspoon for two cans of coconut milk cream. It was perfect, nothing melted! I am always surprised that the coconut whipped cream with a little sweetener and vanilla has no coconut taste anymore. It becomes ‘neutral’ like milk whipped cream.

Hope you enjoy the cake, it is a great idea to bring with for a special event. My boy-friend’s parents liked the cake a lot. 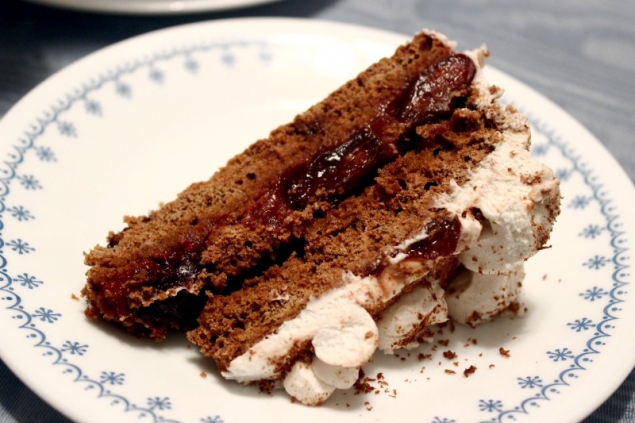 How to Charm the Pants off with a Lemon Tart
A 50th Birthday and a Perfect Marbled Chocolate Banana Cake
A Memory of My Granny – Butterkuchen
This entry was posted in CRUMBS, desserts, recipes and tagged cake. Bookmark the permalink.